Whilst working for The Field Studies Council on charts of Heathland and Wayside plants, I needed to illustrate the three species of Gorse (Ulex) found in Britain.  Having discussed the differences between the common Uk species of heather, I thought I;’d take on this prickly subject.

Gorse is a shrubby, spiny family of plants in the pea family.  They have spiny green prickles or spines and bright yellow flowers.  Young plants have trifoliate leaves (slightly resembling elongate clover leaves).  On mature plants these disappear, and only the spines and the flowers remain. 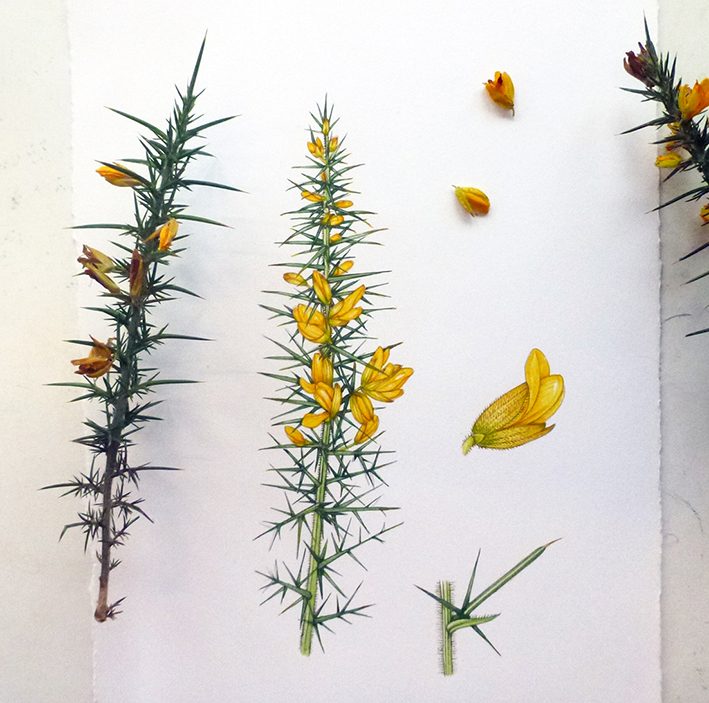 All three of these plants are found on heathland and acidic soils, but their distribution and flowering times can help in telling them apart.  They are Common gorse or Furze Ulex europeaus, Western gorse Ulex gallii, and Dwarf gorse Ulex minor.

This plant is very common and widespread across heathland, coastal areas, road verges, and wasteland.  It grows up to 2m high, and can reach 3m.  It likes acidic soils, but can be found on chalky cliffs (unlike the other species).

The spines on Common gorse are very firm and rigid, deeply furrowed, and a slightly blueish dark green.  They’re 1-3cm long.  The plant is evergreen with slight black hairs on the stem.  It’s a densely spiny plant and forms impenetrable thickets.

Looking at the flower, the bracteoles are more than twice the width of the pedicel (flower stem).  This is larger than in the other species.  Flowers are a rich bright yellow, with the keel of the flower slightly shorter than the wings on either side.  The calyx (up to 3cm) is 2/3 the length of the corolla.  It can be yellow, but tends to be a pale green.  U. europeaus also has a very distinct (and lovely) smell of coconuts.  I always think it smells of tropical beach holidays, especially when the sun is beating down on the flowers.  The calyx is yellow green and has spreading hairs.

However, the big distinction is the time of flowering.  It’s no coincidence that the Oxford Dictionary contains the phrase, “When the gorse is out of bloom, kissing is out of season”.  U.europaeus flowers from January to June.  This is a six month flowering season, with occasional flowering outside of these times.  The other species flower from July through late November.

Fruit are purpley brownish pea pods, about 20 mm long, each containing a few shiny black seeds.  These are viable for up to 30 years.  The remnants of the calyx remain around the pod.

Uses of the plant

Common gorse has long been used for hedging and setting boundries.  It has been cultivated for gardens, and was sometimes bruised with stones before being fed to horses and livestock.  As with the other species, it can survive fire.  It is used in medicine as it produces Lectin.  This is a protein that specifically binds to H-substance receptor sites on human red blood cells.  So this plant is used to test for people lacking these sites. (It’s an unusual condition called “Bombay Phenotype”). – US National Institutes of Health

This plant is smaller and more compact than Common gorse.  It grows up to 1.75m high, and thrives on cliff tops, old pasture, heath and coastline shingle.  Its range is across the West of the UK, and East Anglia, but no further north than Solway.  It isn’t found higher up than 670m. 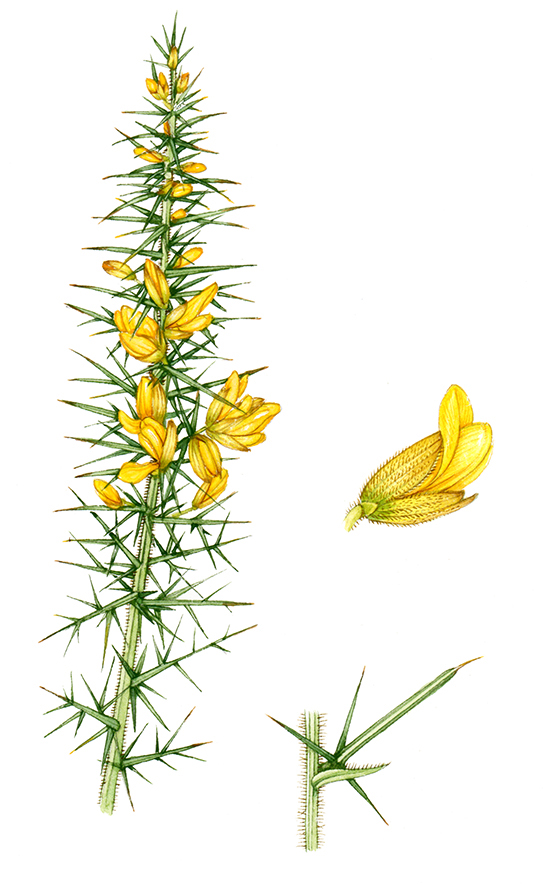 The flowers are a deep yellow, and darker than those of Common gorse.  They have yellow bracteoles with flattened hairs.  These are less than twice as wide as the pedicels, and 0.5mm long.  The calyx (9-13mm) extends up to ¾ of the length of the corolla, and the teeth of the calyx meet.  Unlike Common gorse, the wings of the flowers of Western gorse are longer than the keel.

The flowers are out from July through November.  This is the main way to tell the two species apart.

Fruit are borne in brown pods, and remnants of the flower are often present.

Western gorse is used in many of the same ways as Common gorse, and is similarly good for wildlife.  It provides nesting habitats for birds, and flowers for insects.

This gorse is far easier to tell apart than the other two species.  It is only found in the South and South east of the UK and is a much smaller plant both in habit and in detail.  Rarely growing higher than 1m, it’s often procumbent.  It likes acidic sandy heaths, and is very local in distribution.

The spines of Dwarf gorse are smaller and far less rigid than the other two species.  They are not striated or furrowed, and can be slightly curved.  Spines crowd tightly together around the stem, making it hard to see the stem below.  The stems have brown hairs. 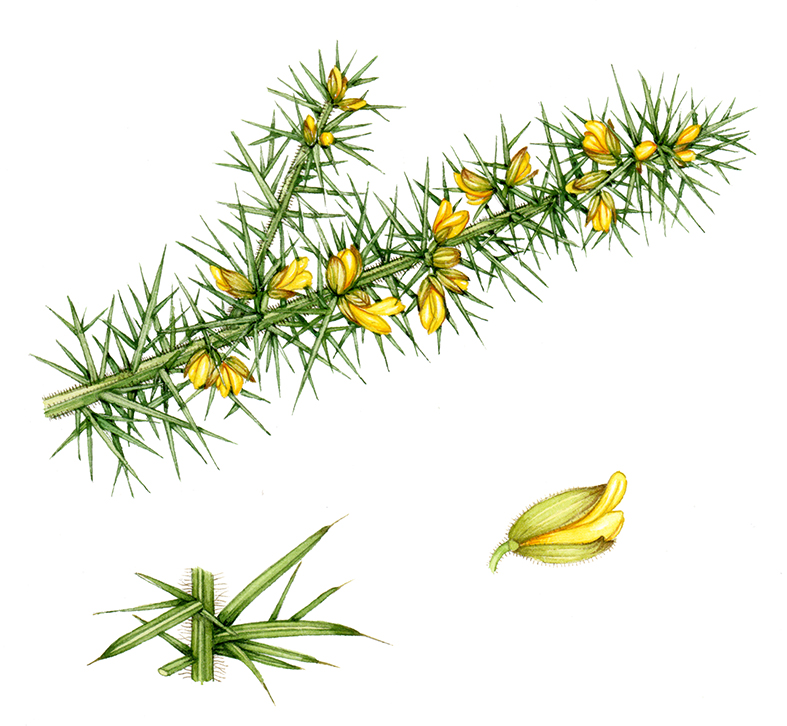 Flowers of Dwarf gorse are yellow.  Their calyx (5-9mm) is almost as long as the corolla. Bracteoles bear flattened hairs and are less than twice as wide as the pedicels,.  Bracteoles are 0.5mm long.  The calyx is yellow, with appressed hairs, and has divergent teeth (unlike in U. gallii).  The wings and keel of the flower are a similar length.

Fruit are borne in pods.  This is because all Ulex are in the pea-family.   As with the other species, the pods turn from a pale green to a brown.  They contain dark brown seeds and often bear remnants of the flower.

The take home message is that the easiest way to tell Common gorse and Western gorse apart is to see when they’re in bloom.  There are other ways, as described, but this tell-tale feature is by far the easiest (though not 100% foolproof) method for a swift identification.

References for this piece include feedback from the botanists I collaborated with to produce the illustrations for Field Studies Council, Streeter’s Collins Flower Guide, Stella Ross-Craig’s amazing illustrations,  the websites of the Wildlife Trusts, UK Wildlfowers, and other useful links (see below).