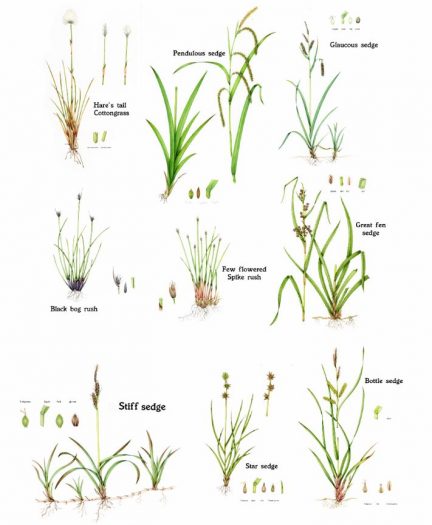 I frequently get asked to illustrate plants which many see as a little dull, and one of these families is the sedges (Cyperaceae).  Sedges, however, are far from dull but are elegant and beautiful plants.  Perhaps all it takes to make people love them is a little information on their anatomy and diversity?

Like grasses and rushes, they are monocots, but are a distinctly different group of plants.  Here is a beginners guide to the Sedges.  (For a beginner’s guide to the Grasses, please click here.  For a guide to the rushes follow this link.) 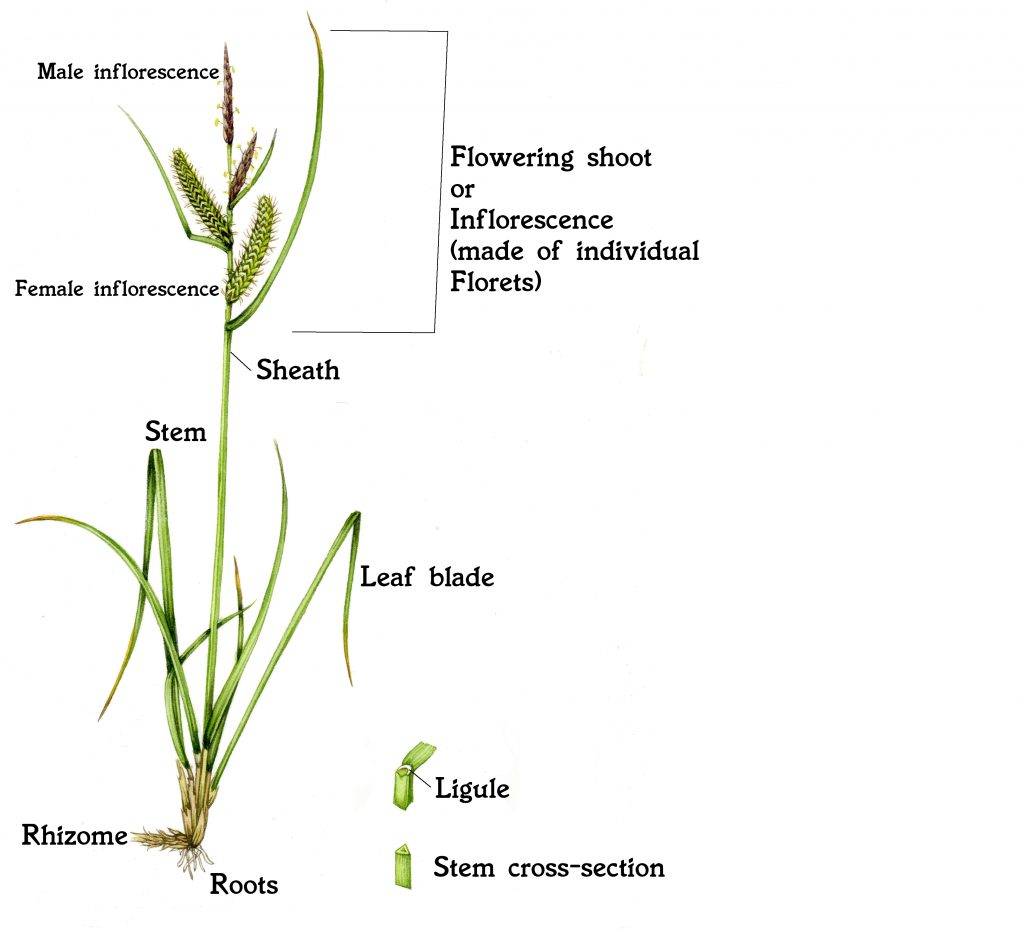 The first and easiest way to spot a sedge is by looking at its stem.  Sedge stems are solid, and unlike grasses, they don’t have nodes or joints.  Sedge stems are triangular in cross-section, three sided, especially towards the base of the stem.  In general they are tough and wiry. 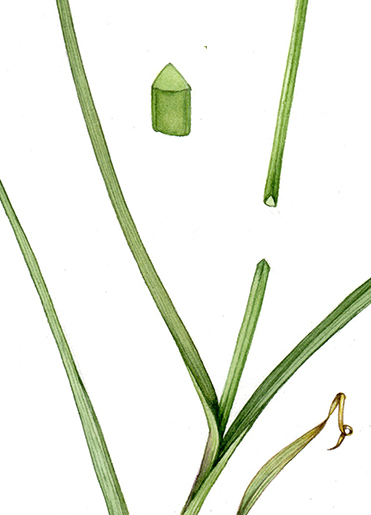 Leaves are similar to grass leaves, being formed from a blade, a sheath (the hollow tube below the blade that encloses the stem), and a ligule (a membranous flap at the junction of the blade and the sheath).

Leaf shape varies enormously between species.  Some leaves are needle like, some have spikey points, some have hollow tips, some are broad and flat, some have smooth edges while others are toothed, in some species (Like the Deer–sedges) the leaves are reduced to tiny flaps, and in others (like the spike rushes) there are no leaf blades at all, just a sheath.  Colour differences are rife too, from yellows through vivid greens to glaucous, almost blue shades.

Unlike grasses,  sedge ligules are fused to the base of the leaf blade.  Below is a range of sedge ligules.  As with grasses, these can be used to identify different species.

Variety of different ligules seen in different species of Sedge

Size and growth form varies in sedges, and both are an important way of telling species apart.  The growth patterns relate to the way shoots grow from rhizome (the underground and horizontal stem).

Some will grow in dense tussocks, like the Greater tussock sedge Carex paniculata.  Other tussocky sedges include the Schoenus and Trichophorum species. 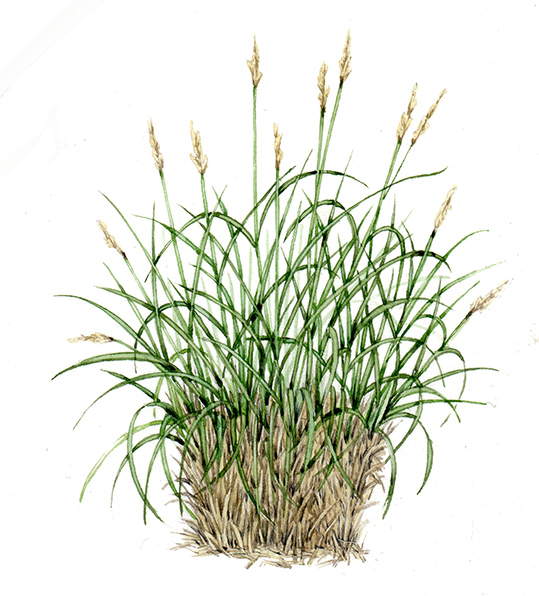 Other species show different growth patterns from the rhizome, putting up shoots which are close to one another, and which radiate from the centre.  The Few flowered spike rush Eleocharis quinqueflora is a good example of this, as are the Isolepis species. 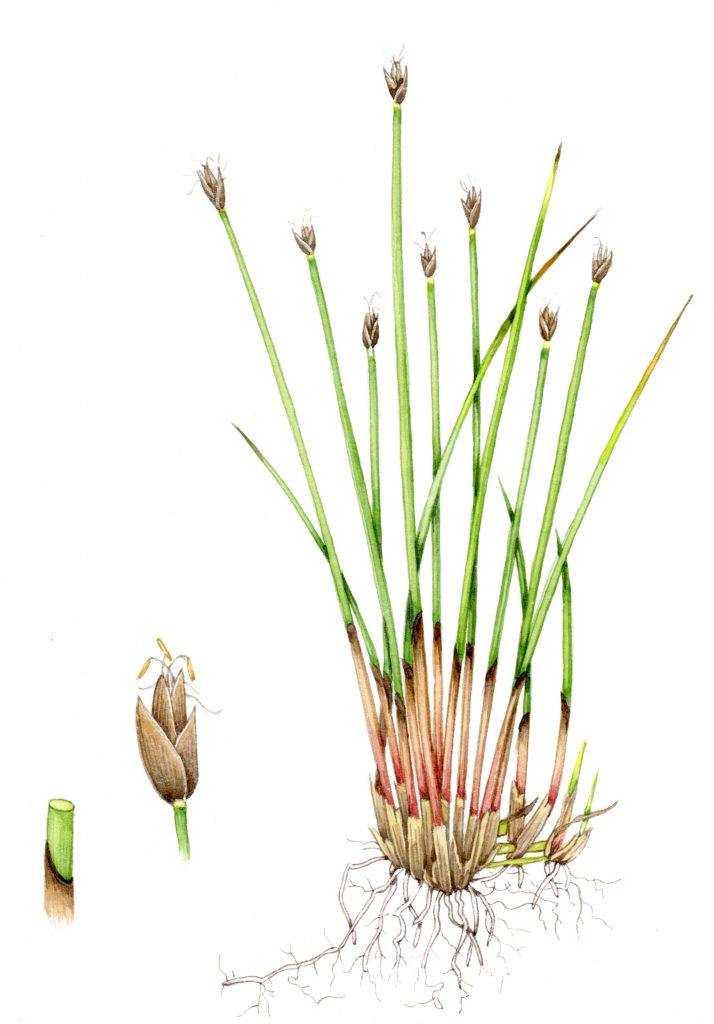 In other sedges, there’s far more space between the shoots coming up from the rhizome, which leads to the plants having a creeping habit.  They’re sometimes referred to as “stoloniferous” which gives a good clue to their growth, even though it’s technically not quite right (unlike the stolons of grasses, rhizomes contain food supplies).  Lots of sedges grow like this, like the Stiff sedge Carex biglowii. 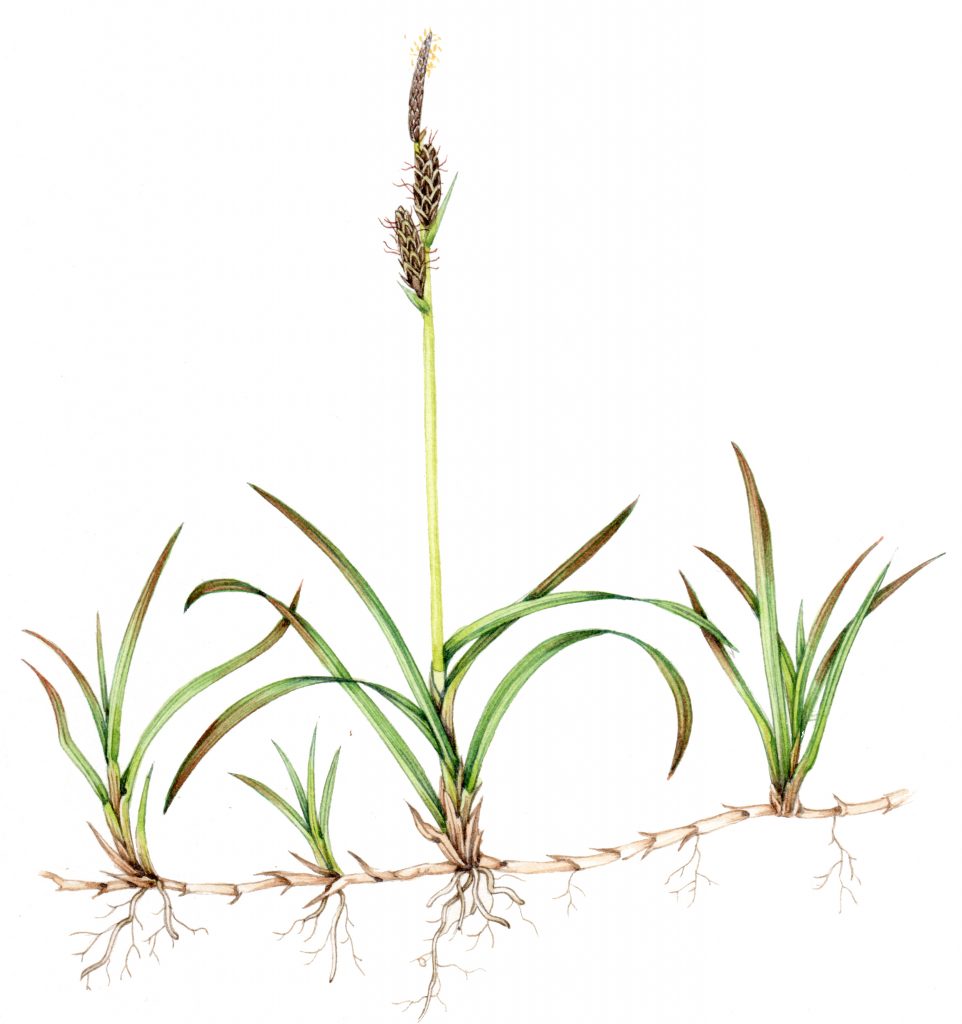 Shoots growing up from along the rhizome; Stiff sedge Carex biglowii

For more on these differences in rhizome growth, consult the bible for sedge enthusiasts, Sedges of the Birtish Isles by Jermy, Simpson, Foley & Porter (p. 5-6) There’s also information on how the rhizome itself can be used to tell species apart, by seeing whether it’s woody or not, and by looking at the leaf scales that grow from it.

The flowers and fruits of sedges are markedly different to those of grasses.  They take a little getting used to.  As with many areas of botany, they have nomenclature specific to their family.

Sedge flowers are known as Inflorescences.  They are made of lots of smaller florets.  Like grasses, they are wind pollinated.

These florets are grouped together into cylindrical or oval clusters which are known as Spikes or Spikelets.

These spikelets are arranged differently, according to species.  They can be solitary, un-branched and at the tip of a stem.  Or they can be arranged in groups, into branching flowering heads.  There may be bracts below the spikelets.  The form and length of these bracts is important when telling species apart. 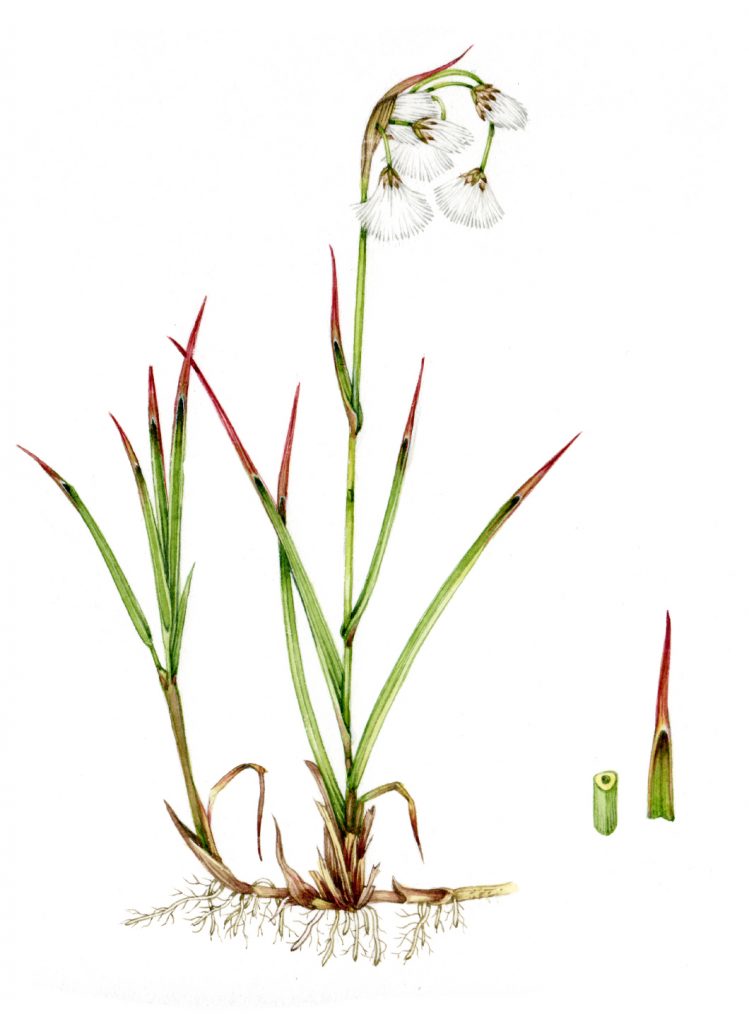 The Few-flowered Spike-rush Eleocharis quinqueflora has solitary spikelets borne at its tips (see picture above).

Across the sedge species, each floret is tiny, and grows in the junction between the stem and a tough scale called a glume.  Many sedge florets are bisexual, bearing three stamens (with stiff filaments bearing anthers), stigmas (less feathery than in grasses and varying from 2 to three depending on species), and an ovary inside a covering; this unit is known as the utricle.

Diagram of a bisexual sedge flower

This diagram shows the anatomy of a bisexual sedge flower.  The utricle encloses the ovary (and eventually encloses the fertilized fruit, known as a nutlet) and may have a pointed tip or beak.

However, the florets of the Carex (true sedges) and Kobresia (false-sedges) families are unisexual, meaning the male and female flowers are separate. 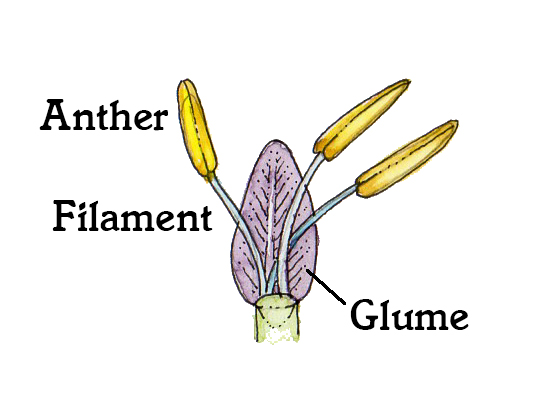 Male flowers have three stamens and a glume.  In male spikelets, the lower male flowers may be sterile and have larger glumes. 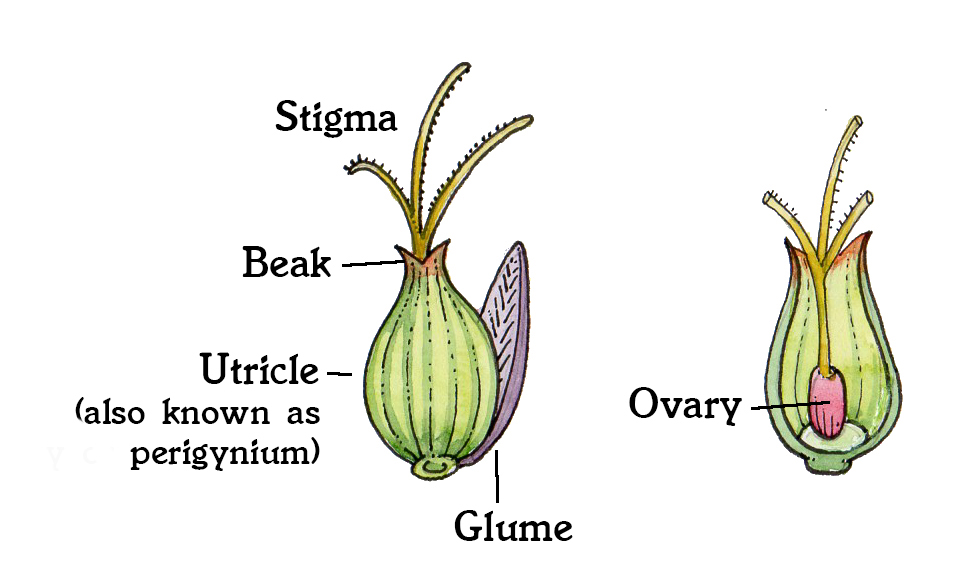 Female florets have a bottle-shaped utricle with a glume below.  In some species there are two stigmas on the utricle (like the Stiff sedge Carex biglowii and the Common sedge Carex nigra) and these tend to mature into a flattened curved nutlet.

In other species there are three stigmas per utricle (as with the Carnation sedge Carex panacea); these tend to mature into a rounded or somewhat triangular nutlet. 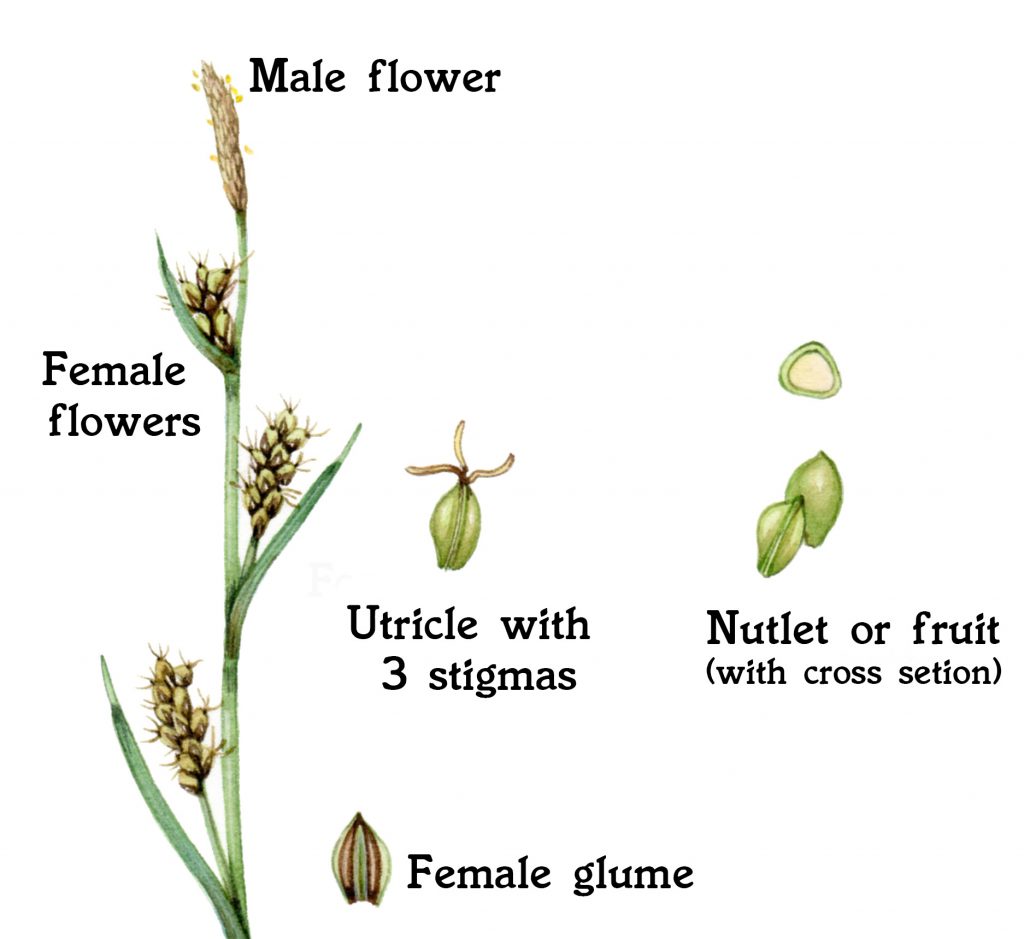 Although sedges with unisexual flowers may have only all-male-floret or only all-female-floret spikelets, this isn’t always the case.  In some species the spikelets of both sexes are carried on the same plant, with all the male flowers at the top and female ones at the bottom (androgynous), or vis a versa. 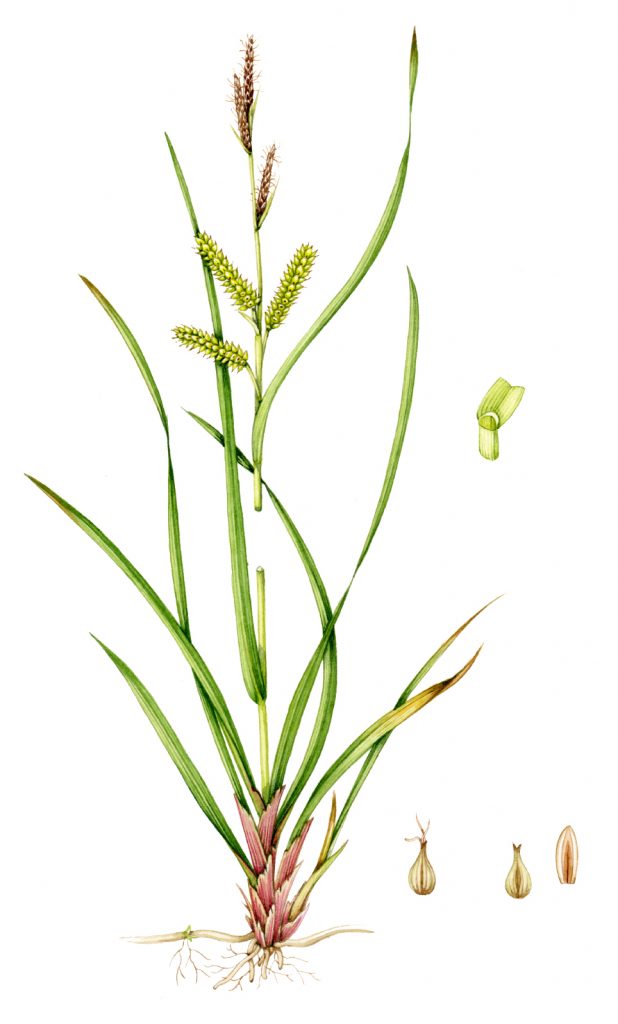 Bottle sedge Carex rostrata has unisex florets and bears thin male spikelets above the female ones, and thus is androgynous.

In the Diocecious sedge Carex dioica, male flowers are carried on one plant with the female spikelets on another (the clue is in the name, I suppose). 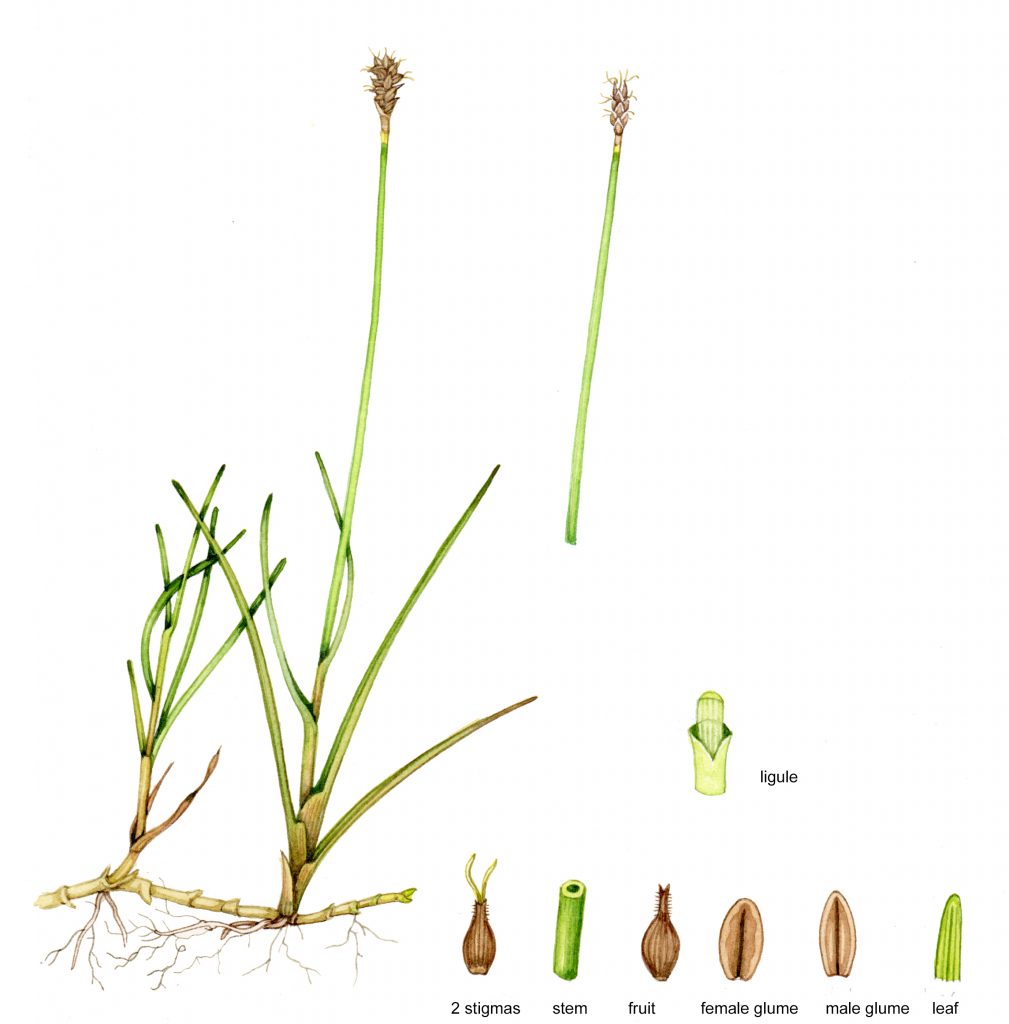 This arrangement of the tiny spikelets, and whether they’re bisexual, male or female is the bit of sedge anatomy I find most confusing!

Nutlets or fruit of sedges

The fruits or nutlets of sedges are vital when it comes to telling species apart.  Their shape and size matters.  The absence or presence of a beak is important.  Shape of a beak (if present) is vital.  Colour, hairiness (or not), and presence or absence of veins are all important. 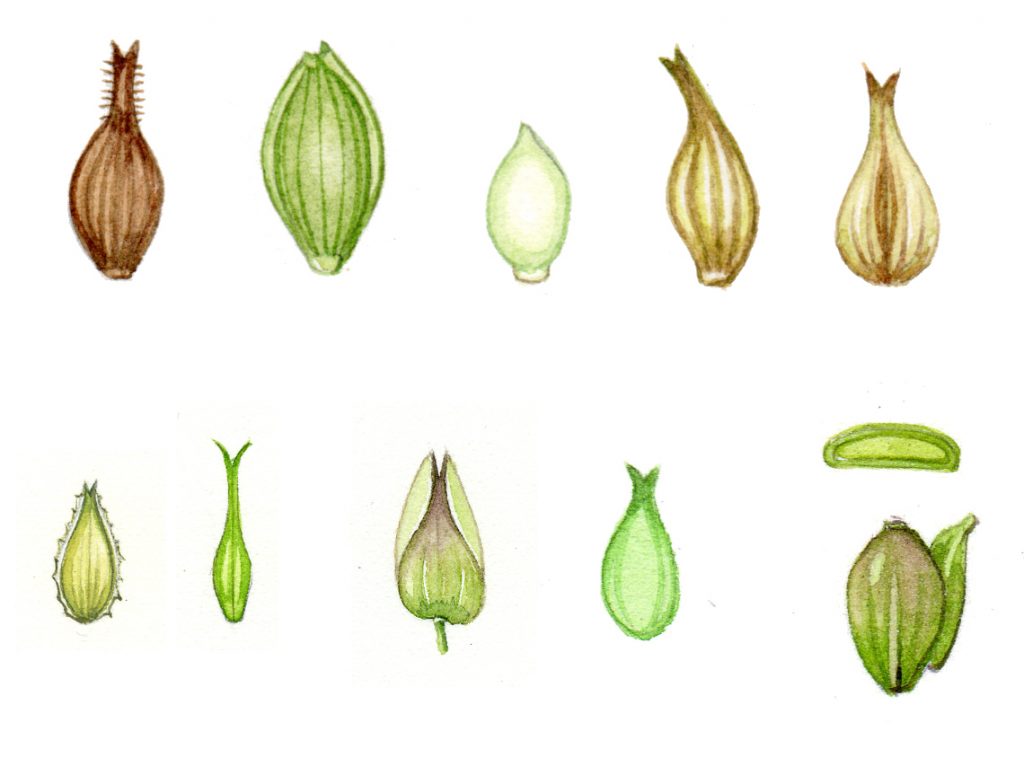 The variety of sedges is amazing.  It includes beautiful species resplendent with white bristles such as the cotton grasses Eleocharis.  Then there are elegant drooping plants like the Pendulous sedge Carex pendulosa and the blueish Glaucous sedge Carex flacca.  Unobstrusive species that resemble rushes like the Black bog rush Schoenus nigricans are lovely, too.  Large plants with toothed leaf blades like the Great fen sedge Cladium mariscum are dramatic representaives.  There are what I think of as “typical” sedges like the Stiff sedge Carex biglowii.  Don’t forget deauties with extraordinary fruit (like the Bottle and Star sedge, Carex rostratum and echinata respectively.)

Below is an array of these fine plants.  I’ve been commissioned to paint these by the Field for School Studies.  They appear on fold-out guides to different habitats. 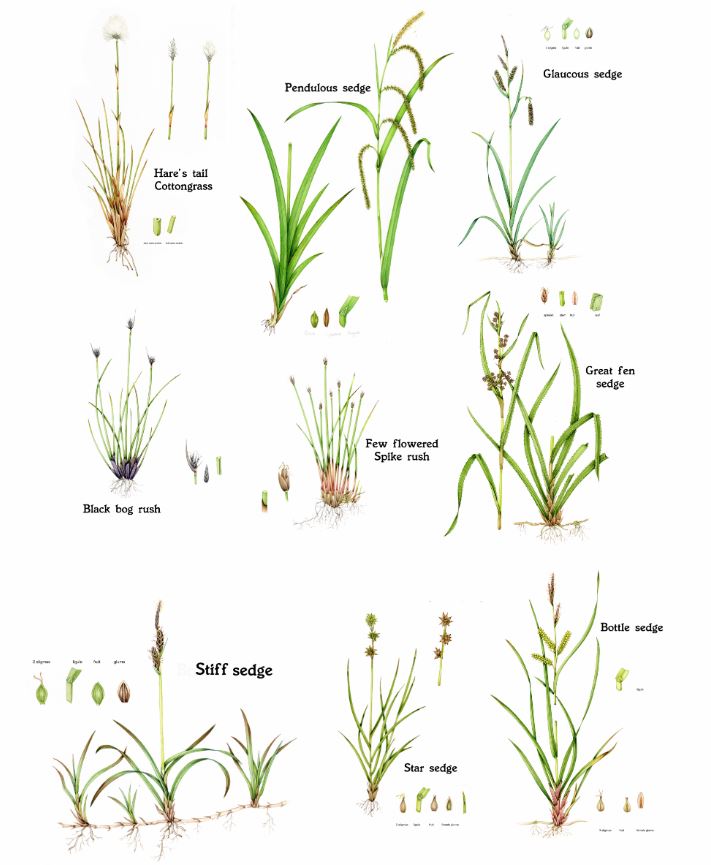 A small variety of the more than 5,500 species of sedge

There are several things to consider when trying to identify a sedge to species level.  Think about how it grows from the rhizome.  Consider leaf width, length and colour.  Lok at leaf ligules.  Where is it growing (habitat)?  What size is the plant? See whether it has separate male and female flowers.  Look for details of the spikelets.

With Carex species, you first and foremost need to consider the nutlet or fruit.

Glumes, at the base of the spikelet, need to be examined and the colour and shape considered.

Bracts (below the spikelet) need a close examination.

Figure out if there are two or three stigmas on the flowers.

Look to see how the flowers are arranged on the plant.  Both their position on the stem and in terms of where female and male flowers sit if relevant.

I love sedges, although I readily admit to being almost a total novice when it comes to identifying them in the field.  There are some splendid courses on sedge identification out there (like the Field Studies Council one, which I blogged about attending last year); and for the British Sedge species some very useful books.  These include the “bible” for Uk sedge identification, Sedges of the British Isles by Jermy, Simpson, Foley & Porter.  It’s published by the Botanical Society of the British Isles and is a hefty and very comprehensive volume, complete with a lot of detailed information on growth and anatomy in the opening pages, and distribution maps for each species.

Diagrams in this blog owe a lot to the incredibly helpful The Cambridge Illustrated Glossary of Botanical Terms by Hickey and King .

I do hope that this introduction to the beautiful sedges will have inspired some of you to go out and start looking at these beautiful and frequently overlooked plants.  Along with grasses, and rushes, they’re proving to be really fascinating; both to learn about and to illustrate.