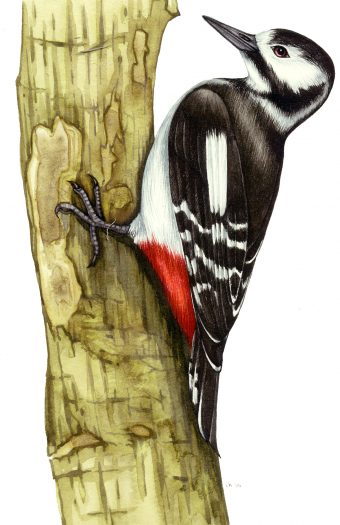 Sometimes I get asked to complete natural history illustrations on topics that are as fascinating as they are random.

Last week, Bloomsbury Publishers got in touch to ask me to do a diagram for one of the books in their “Spotlight” series of natural history titles, this book will be all about woodpeckers.  (I’ve done diagrams for other titles in the series including “Spotlight: Robin” and “Spotlight: Bumblebee”).

This specific illustration was to be showing how a structure called a hyoid helps support the woodpecker tongue.  It also has a vital role in cushioning the skull as the woodpecker is busy smashing its beak into solid wood.  As stated in the article on Plos one by Wang, Cheung et al, “The woodpecker does not experience any head injury at the high speed of 6–7 m/s with a deceleration of 1000 g when it drums a tree trunk” (Why do Woodpeckers resist Head Impact Injury: A Biomechanical investigation Plos one, October 2011)  This is properly extraordinary; such force would not only give most vertebarates concussion and a massive headache, but would almost certainly result in permanent brain injury too. 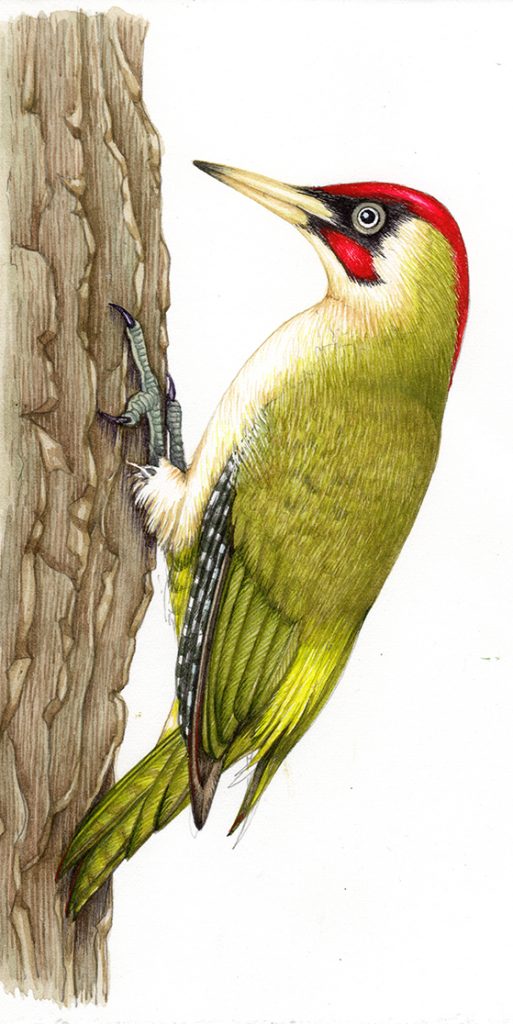 So how do they do it?  As summarised by Samantha Hauserman in “Why Don’t Woodpeckers get Headaches?” there are a variety of adaptations that help the birds handle these massive and repeated impacts.

Illustration of the hyoid

The first is the structure I’ve been asked to illustrate, the hyoid. 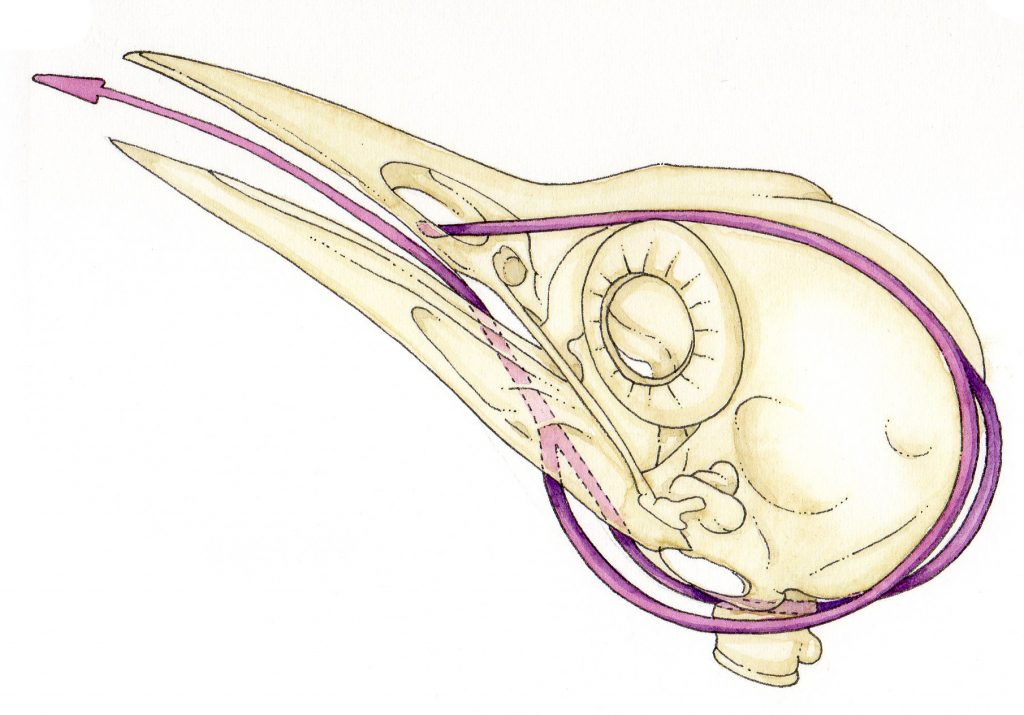 Woodpecker skull with the hyoid highlighted in purple

The hyoid is in the neck, and is present in all vertebrates.  It’s made of cartilage, bones, and connective tissue.  Hyoids help support the tongue muscles.  In humans it’s pretty small, and shaped like the letter “U”.  However, in birds it’s a more complex structure.   Bird hyoids have two elongated arms which reach all the way round the skull and to the tip of the tongue, known as “hyoid horns”. (RSPB Spotlight Woodpeckers by Gerard Gorman, Bloomsbury, Sept 2018).

Woodpecker hyoid horns are especially long, and push the tongue out of the bill as they move forward.  This means the woodpecker can extend its tongue a long way into holes in trees and cracks in bark, and thus successfully feed on the insects hiding in that habitat.  The hyoid horns wrap around the skull, Keeping the hyoid structure in place, rather like a seatbelt or a harness might do.

The hyoid as a shock absorber

What’s especially clever is how the hyoid horns work when the tongue is not busy probing for insects.  In the same way that shock absorbers can made a bicycle much smoother to ride, the hyoid in woodpecker cushions the skull from the force of the blows. It’s a highly elastic structure, so when it’s at rest it’s wrapped around the skull, like an elastic and protective cushion for the brain. 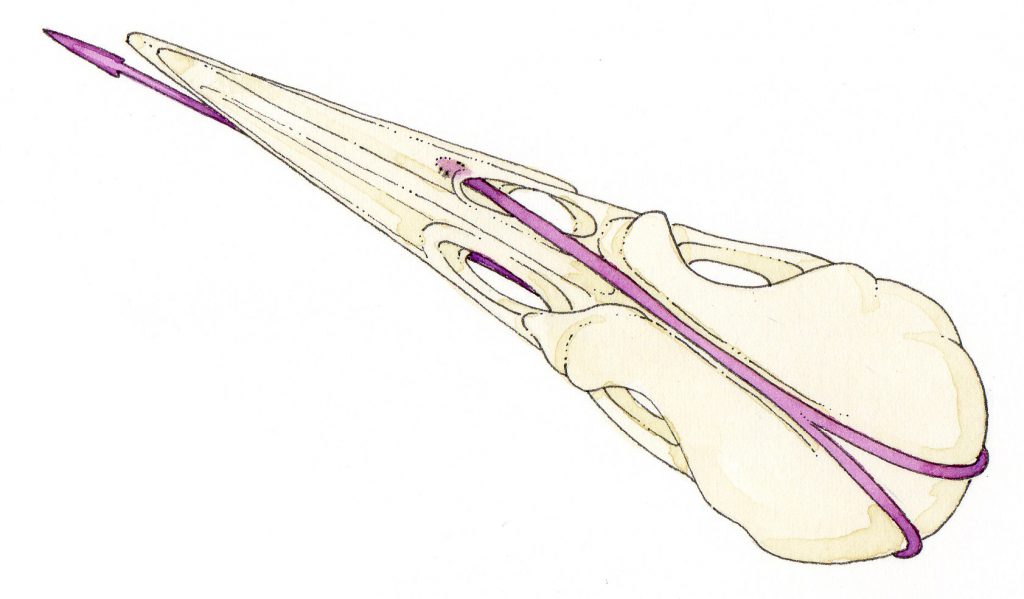 Woodpecker skull from above.  This shows the hyoid is like a seatbelt round the back of the skull.  It also shows the diagonal groove in the skull that it leaves.

Closer examination of the hyoid has found that it’s a jointed structure and has a tough inner core with a more flexible outer layer.  It’s also been found that the posterior area of the hyoid bones have the lowest resistance to bending, which shows that area is highly flexible and thus perfectly designed to cushion impact.  (“Structural analysis of the tongue and hyoid apparatus in a woodpecker” Jung, Naleway et al. Acta biomaterialia 2016) 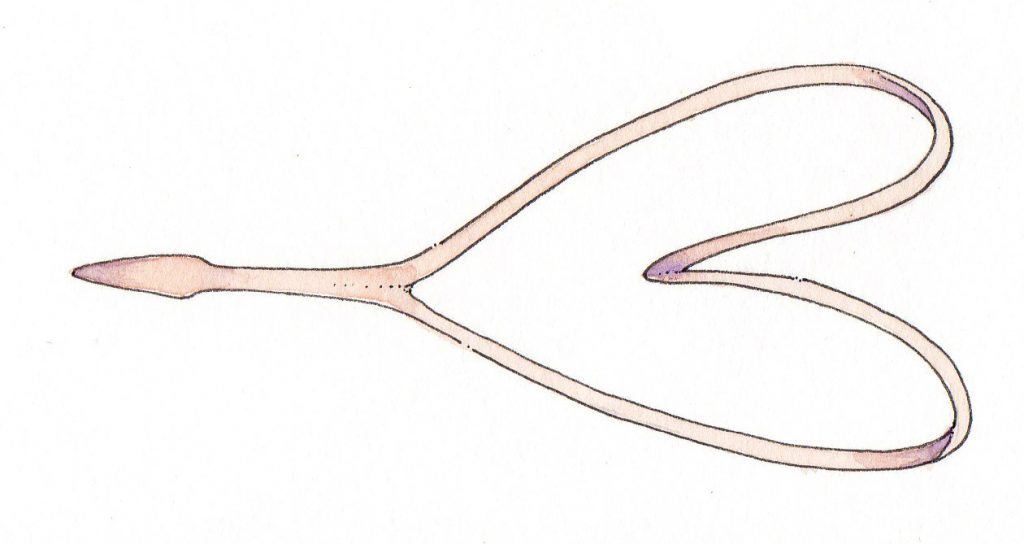 Other adaptations to avoid brain injury

Woodpeckers are also very good at using their beaks.  They do this in a way that minimizes the impact on certain more vulnerable areas of their brains.

The beak design helps too, with the upper beak being slightly longer and harder than the lower beak.  This provides something of a protective overbite, and the very hard upper beak helps absorb impact.  It’s been proved these receive the bulk of the impact, with the force at a maximum just after a strike is made. 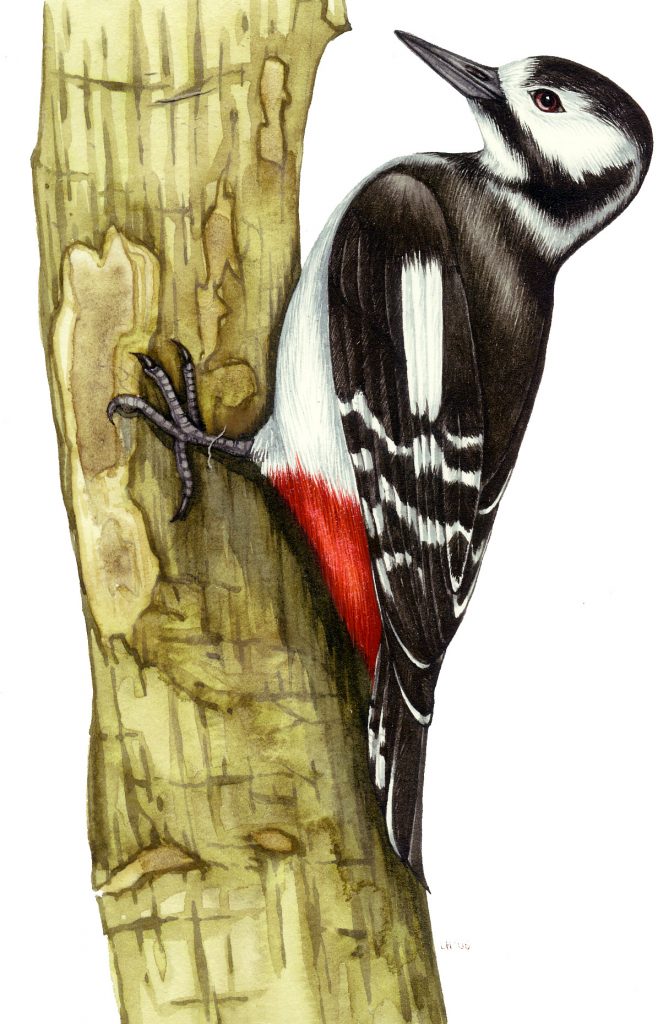 The plates of a woodpecker skull are more flexible than in other birds, with the bones in the forehead being more plate-like and spongy than in other parts of the skull. (“Structural analysis of the tongue and hyoid apparatus in a woodpecker” Jung, Naleway et al. Acta biomaterialia 2016)

All of these structural and behavioural elements combine to allow the woodpecker to drum against trees to find food.  They drum to declare territories and attract mates.  Repeated actions that would leave most vertebrates brain damaged can be performed over and over again with no ill effects. 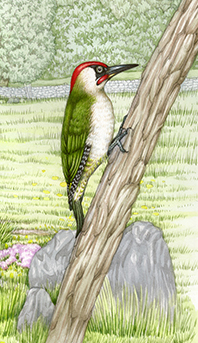 So next time you hear a woodpecker drumming on a tree, pause.  Spare a thought for the extraordinary level of biomechanical skill that’s gone into making such behaviour possible.  Over and over again, I’m gobsmacked by how wonderful and efficient evolution and natural forms are.  Researchers are now looking to see if the physical adaptations of the woodpecker skull can be used to improve the design of bike helmets, and of other engineered structures that need to absorb energy.