Step by step Botanical illustration of an orange 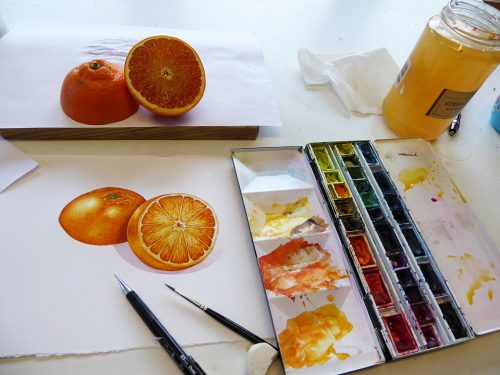 Choosing a subject to paint in winter: Why an orange?

In the middle of winter it can be hard for a botanical illustrator to find good subjects to paint; so for my Monday Botanical illustration drop-in class in Hay on Wye I chose to work on a sliced orange as a subject.  The process of breaking down a painting into steps can be tricky; what surprised me most about this subject was how much harder it turned out to be than I’d anticipated!

For lots more of my step by step botanical illustration blogs, click on the link.

A good thing about choosing an orange as a subject is that in most places you can get your hands on one easily, and no matter what the season.

Also, I’ve recently painted an orange plant for the label of a honey jar (click here for the step by step blog).

(I do need to offer a minor apology, I took the photos of the work in progress on a slight angle, so the painting looks a little distorted.)

Draw up the orange

First, using a sharp, hard pencil (I like mechanical pencils like the Pentel P205) draw up the orange onto watercolour paper. 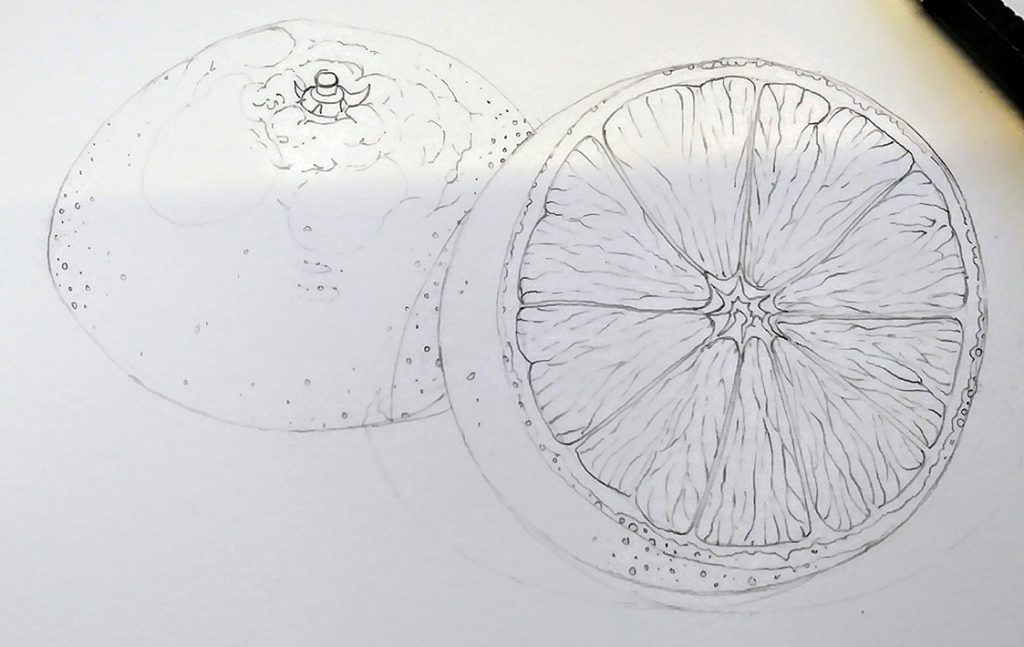 Be careful as you do this, the circles and half globes going on in this compostion are very easy to get wrong, and if the drawing is at fault then the finished painting won’t look as good as it should do.  Look closely at the details on the orange skin, the pits and wrinkles.  Plot these in.  Also mark out where your highlights are, you’ll be keeping these as white paper for much of the proccess.

Draw in the individual parts of the sliced orange too, count to be sure you have the correct number of segments and work into the detail of the fibres within each segment.

Next, mix up some Cadmium orange light, Cadmium orange dark, and a touch of Crimson lake (or any other red).  I like Winsor & Newton pans, and always use a Winsor and Newton Series 7 sable brush (in this case a No. 1).  With a dry-ish brush, plot in your darkest areas, being sure to convey some of the texture of the orange skin.  Look closely at the shadows cast by the wrinkles at the top of the fruit and work into these. 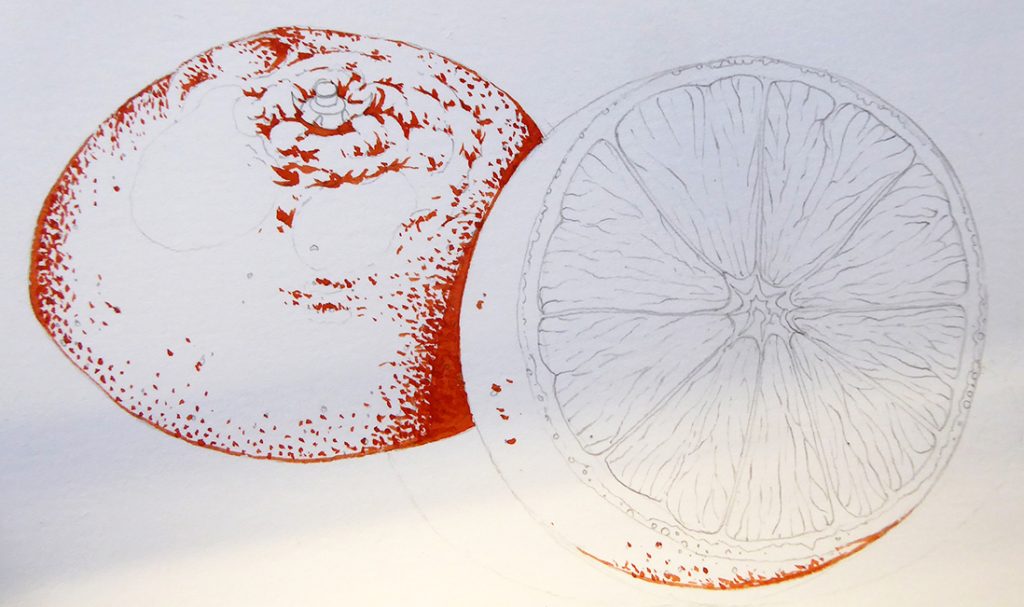 Plotting the darkest shadows on the skin of the orange

Mix a paler orange, just Cadmium orange light, and work from your darkest darks into the mid-tones.  Again, focus on conveying the dimples, pitted texture of the orange skin.  Be sure to leave the highlights as large areas of untouched white paper, although you can use your brush to show texture at the edge of these spaces. 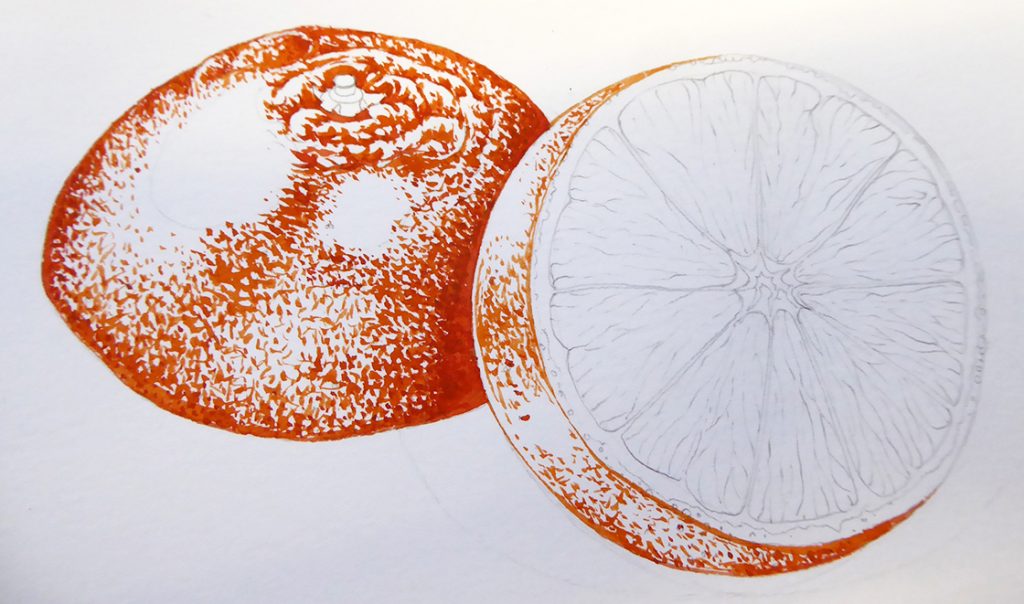 Plotting in the midtones

Mix up a watery Cadmium yellow dark and a touch of Cadmium orange light.  (This is called a tint, a pale version of a colour, and with watercolour you make colours paler by diluting them with clean water.)  Apply this over the whole picture, making it really pale on the edges of the highlighted areas, but leaving the main highlights as untouched white paper.  Once this has dried, mix an even paler tint of the yellow-orange and put it over the entire half orange again, with a little more overlap into the highlighted regions.  This wash should be very pale indeed. 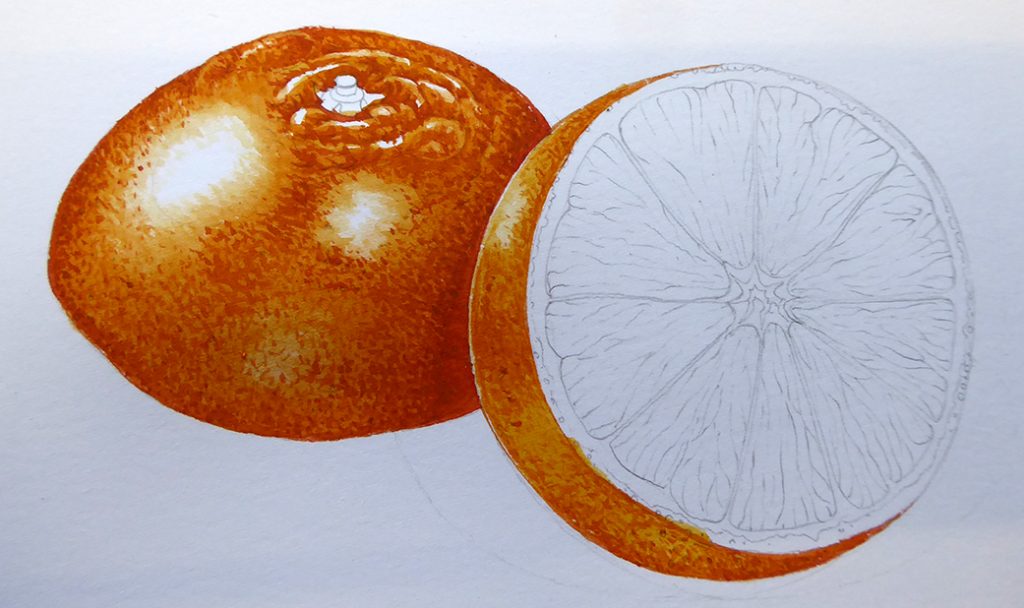 Move onto the sliced orange, and put clean water around the edge of the sliced area.  Mix a tint of Cadmium yellow dark and go round the very edges of the slice, allowing the yellow to bleed into the wet, white “pith”.  Allow this to dry fully.

Beginning to work into the edge of the sliced area

Next, work into the fruity central area.  Mix up Cadmium orange and Cadmium yellow dark, and with a confident hand and dry-ish brush, outline the individual edges of each of the little juicy areas within each segment.  Be sure to refer to the sliced fruit all the time as you do this.  Make the regions touching the pith at the edge, and abutting the radial white lines slightly darker, and put less colour in toward the centre of each segment. 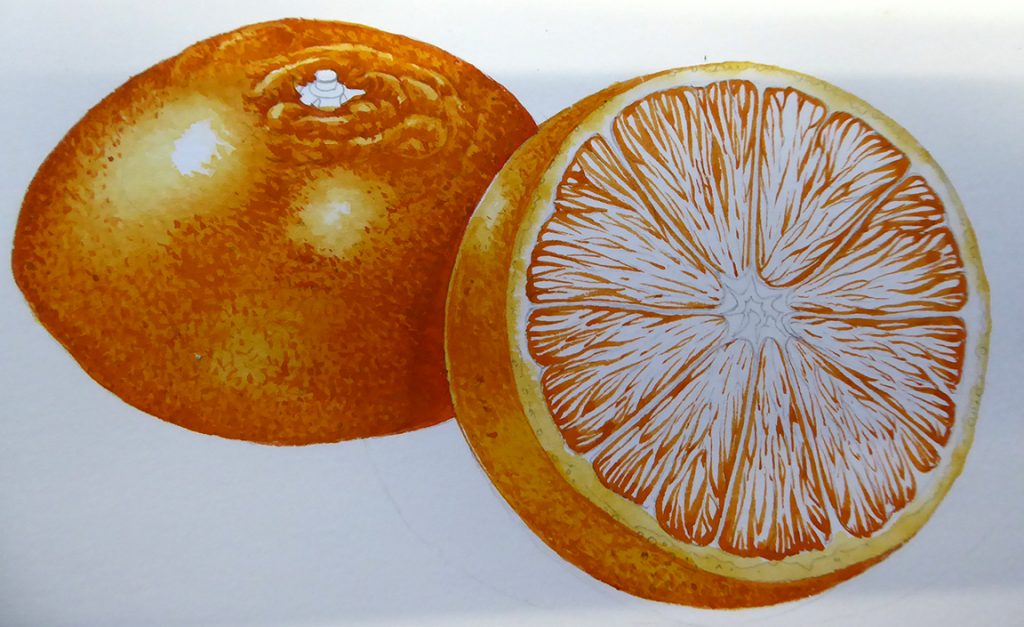 Painting in the darkest areas of the sliced fruit

Using Cadmium yellow dark, mix a slightly more dilute colour and paint this as the edges of the little areas which are toward the middle of the fruit.  Using the same colour, go over the orange edges you just popped in and fill in the individual juicy fibres, leaving a flash of white (unpainted paper) at the centre of each. 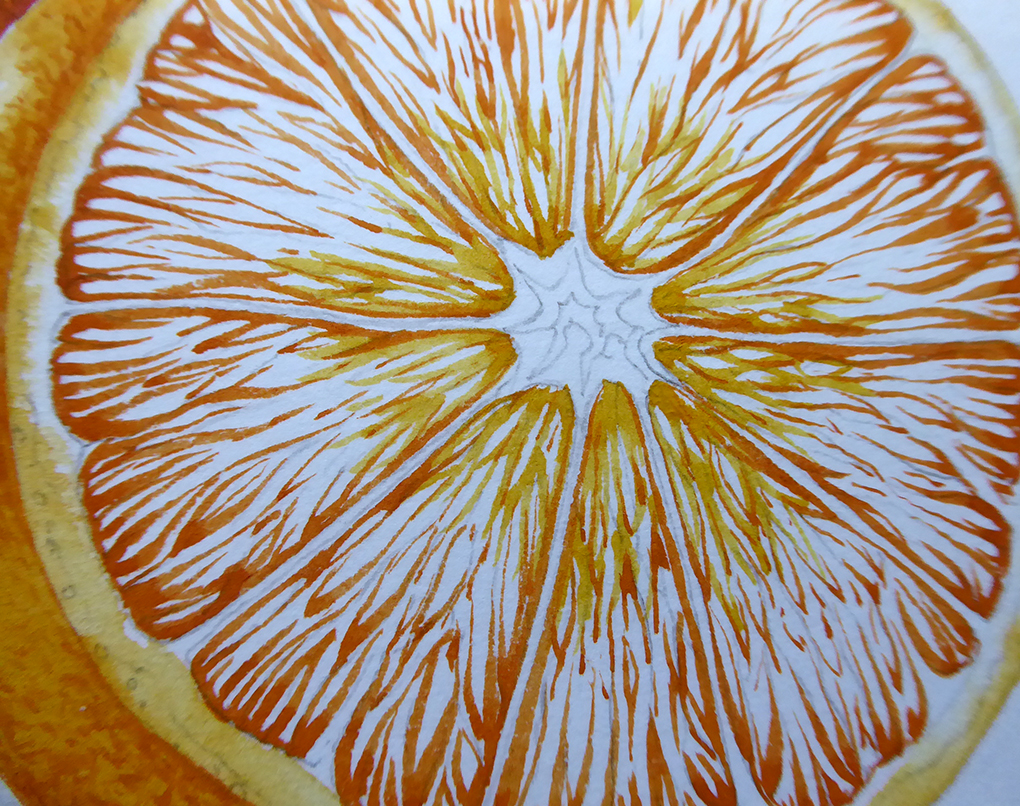 Working into the paler areas of the fruit fibres

Working into the midtones on the sliced area

Return to the outer edges of the fruit, where it touches the pith circumference.  Mix up some Cadmium orange dark and a touch of red.  Pick out the very edges of these fibres.  This should help each segment look more unified.  You can do the same, with a very light touch, along the edges of the pith radii. 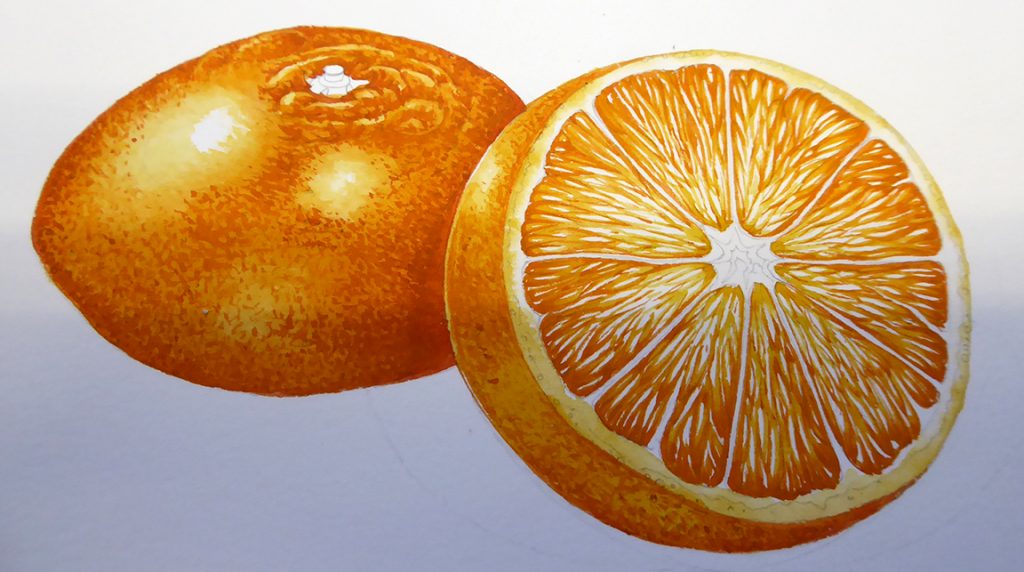 Filling in the edges of the sliced fruit

Return to the outside of your orange as the sliced region dries.  Get some more detail into the darks.  Mix up some Cadmium orange dark with Vandyke brown (only a touch of brown) and pick out the darkest areas, the deepest corners of the shadows, and the stem where it attaches to the fruit. 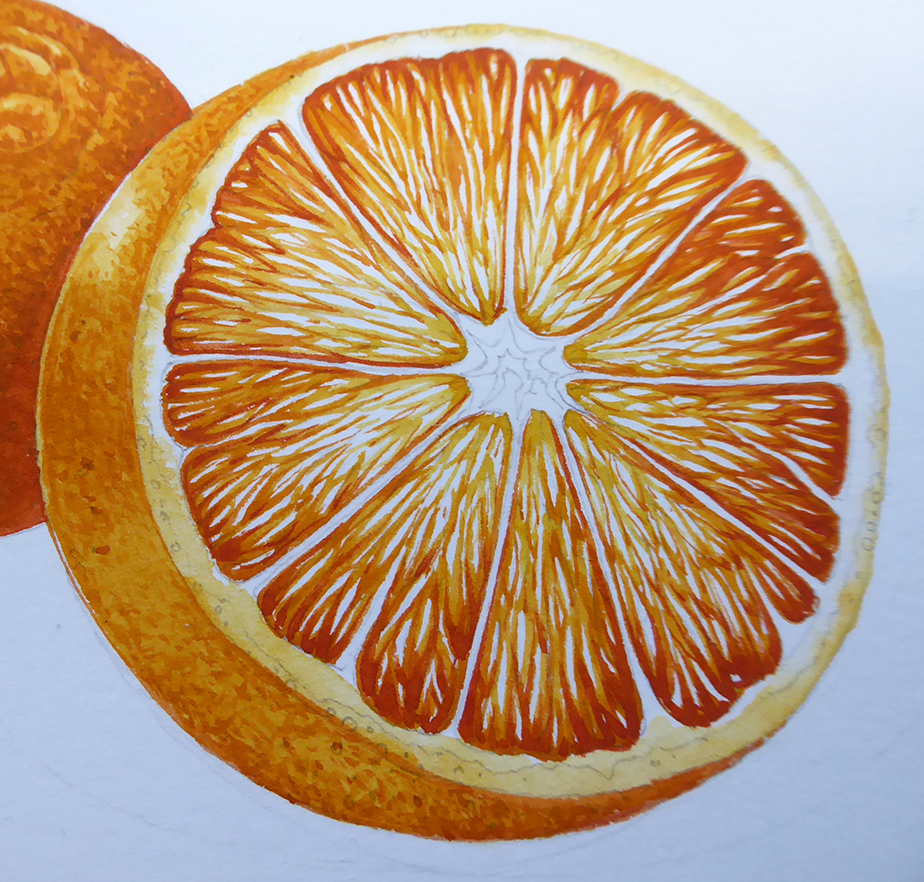 Darkening the edges of each segment of sliced orange

Painting the highlights of the sliced orange

Now mix up a very pale tint of yellow and apply this over the segments in the sliced bit of the painting.  Hopefully the areas you left white will still show as highlights. 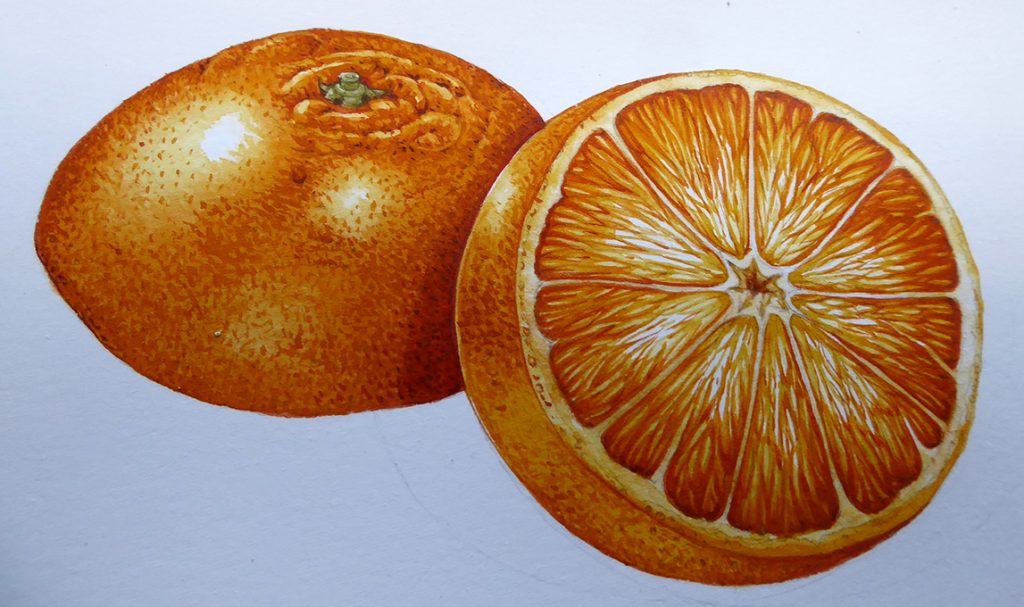 Pale tints and washes start to bring the painting together

Once you’ve painted in the stem in detail, with green and browns, use a very pale tint of Cadmium yellow light and apply it over the whole of the external area of the orange, including the highlights.  Keep it light or you’ll lose the tonal differences you’ve been working on!

Allow the whole thing to dry.

Finishing touches and a shadow

Now you can start tweaking it.  Clean up any areas which aren’t nicely defined.  Pick out blemishes and dark areas with more orange and brown.  Maybe put a hairline of darker paint round the external edge of the orange skin. 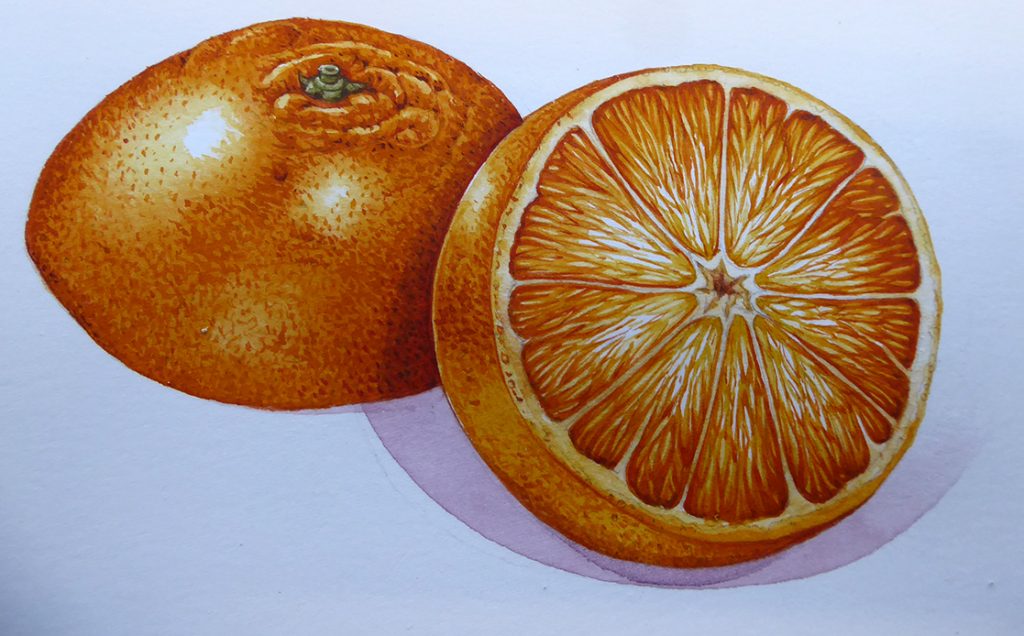 Close to finished, shadow added and darkest areas picked out

Shadows.  You can choose to include shadows to anchor the orange to the ground, or not.  Either is fine.  I mixed up Purple lake and a tiny bit of Vandyke brown, and with a firm and decided brush I plotted in the shadows which fell both onto the orange and onto the paper below the orange. 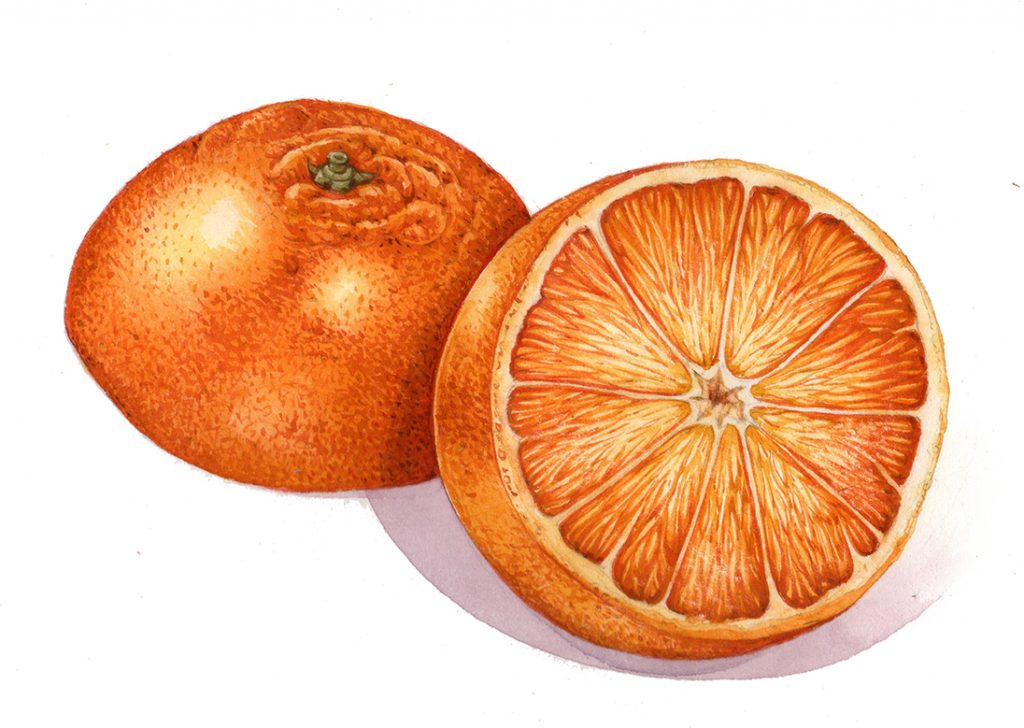 With my orange, the areas I feel that worked least well were the sliced face, I think perhaps the radii of pith coming from the centre to the perimeter weren’t observed carefully enough at drawing stage, and I’m not convinced the orange fruity area looks juicy enough.  I think the top half of the orange has worked better, and am pleased with the wrinkles around the stem. 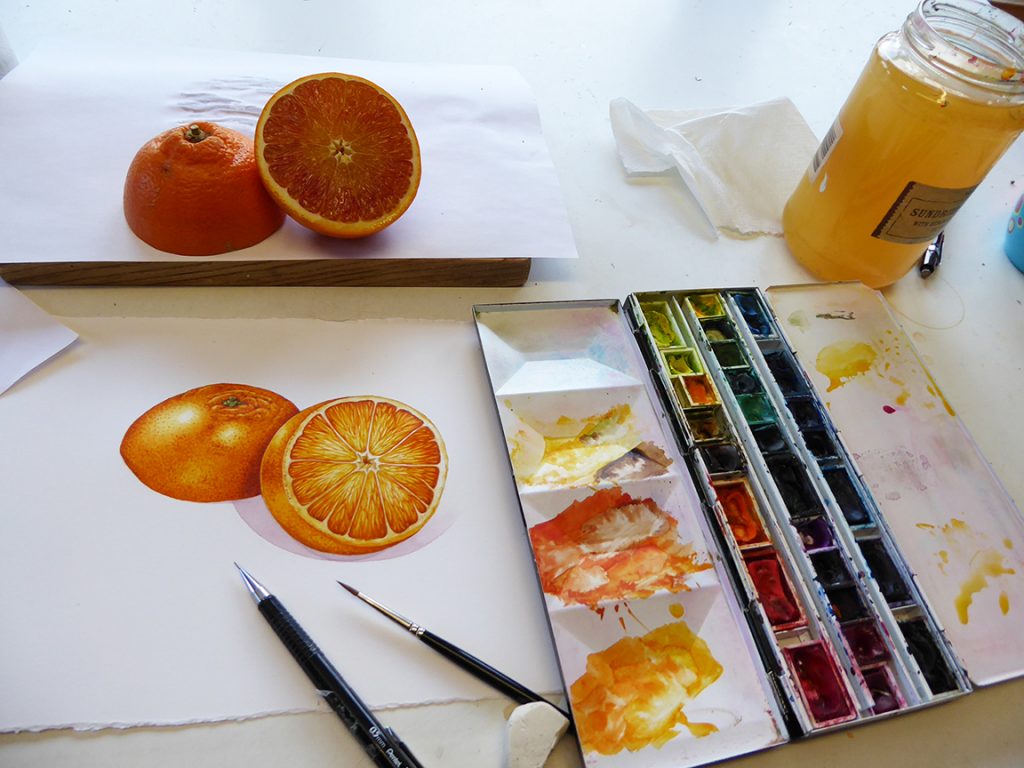 When you’re finished with an illustration, it’s always important to figure out which bits have and haven’t worked for you, and if possible try to come up with reasons and solutions so you can alter your approach next time round.

You can also reward yourself…sit down and eat a delicious orange!

This step by step is available as a printable A4 image file on my Pinterest page (along with several other step by step sheets), in a summarised form.