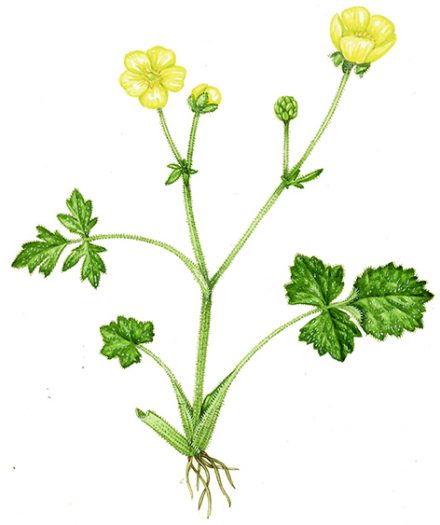 Looking through my botanical illustrations recently, I realised I’d completed quite a few watercolors of flowers in the Buttercup genus (family Ranunculaceae).  Like the botany ingénue I am, I assumed I’d covered most of the British buttercups, and decided to write this blog.  Little did I know, I wasn’t even half-way through them!

Buttercups are members of the Ranunculus genus.  This also includes hellebores, marsh marigolds, clematis, anemones, and crowfoots.  Buttercups and Spearworts are the focus of this exploration.

Ranunculus plants have variable leaves, heights, and growth habits.  They have fruiting heads made of achenes (click for my blog on achene types) borne more or less in a globe.  In most cases theyhave yellow or white petals with little nectar-producing dips near the petal base, and  all contain a brilliant chemical which helps protect them from grazing animals.  This is the glycoside ranunculin. 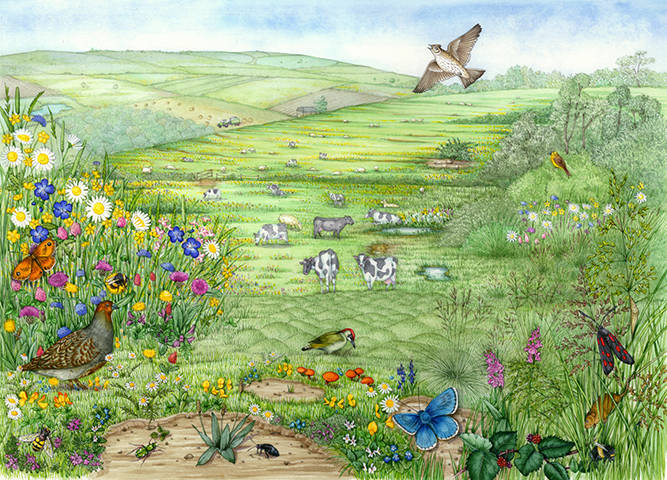 Better watch out for those vesicants in the buttercups, you livestock!

Ranunculin turns into the lactone protoanemonin when it gets crushed (eg. when chewed by a cow).  Tthis chemical is a vesicant, a blistering agent.  It can cause blistering in the mouth and eyes, and vomiting and nausea if eaten.  In some cases, it’s proved fatal to young livestock that haven’t learned to avoid it.  Luckily for cattle and the farming community, protoanemonin changes (dimerizes) when it contacts air.  It turns into the relatively harmless anemonin; thus rendering it a tasty rather than a toxic addition to hay.

First of the plants to look at is the Meadow buttercup, Ranunculus acris

This plant has a comparatively hairless stem (specially higher up the plant).  It’s basal leaves are divided into loosely joined lobes.   The higher up the plant you get the more complete these divisions are.  Just below the flowering stems, the leaves are almost completely divided into separate lobes.  However, at no point are any of the lobes separated from the rest of the leaf by having their own stems.

Flowering stems are un-furrowed.  Sepals are slightly hairy, yellowish green and not bent back on themselved (reflexed).  They are held erect.

The fruits (achenes) are oval, with a little beak.

Meadow buttercup is very common, and favours damp and calcareous soils such as low pasture and fens.  It can be found in profusion in heavily grazed areas where its very high levels of protoanemonin means livestock avoid eating it.  So it flourishes.

The Creeping buttercup Ranunculus repens is next. 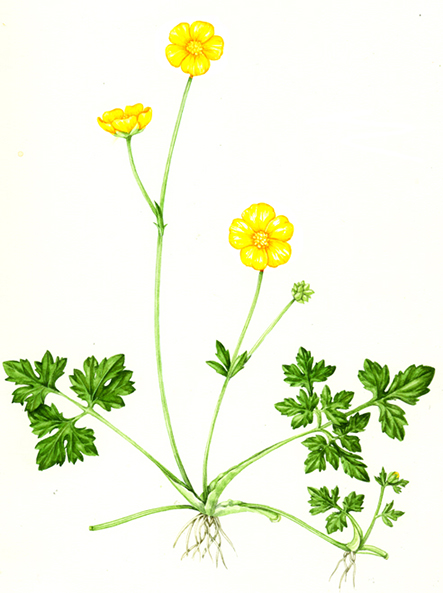 This plant overwinters as a flat or low lying basal rosette of leaves with long stout roots.   In spring, it sends out “creeping” runners which root at their nodes and produce flowering daughter plants.  Come winter, these daughter plants will survive as the parent plants die off.

Creeping buttercup leaves are more triangular than those of the Meadow buttercup.   They’re also divided into segments or lobes (often 3).  The central leaf lobes (and sometimes the lateral lobes as well) have stalks.

The stems of the Creeping buttercup are slightly hairy and furrowed.  Flower buds are an oval shape.  Petals are a deeper gold than the Meadow buttercup.  Again, the plant has hairy sepals which aren’t reflexed.

The achenes are hairless.

Creeping buttercup is found in wet meadows and heavy soils.  See it in fens, disturbed moist habitats, and as a common weed in fields and gardens.  (I’ve got plenty of the basal rosettes just outside the window as I type).  It prefers improved and rich soils, so is pretty unusual in upland grassland.  It’s tough and doesn’t mind being trampled on.  Creeping buttercup gets grazed more than the Meadow buttercup since it has lower levels of protoanemonin.

I’ve not illustrated the Bulbous buttercup Ranunculus bulbosus.  It has thick roots and swollen, bulbous stock (hence the name).  Leaves are divided.  Sepals are distinctive and reflexed.  It prefers drier soils, and can be found in established dunes and on grassy slopes.  It can’t handle being trampled.

Hairy buttercup Ranunculus sardous  has a clue to its characteristics in its name.  It’s similar to the Bulbous buttercup in having a swollen base, although this is less obvious.  There’s also and fibrous roots.  The whole plant is hairy. 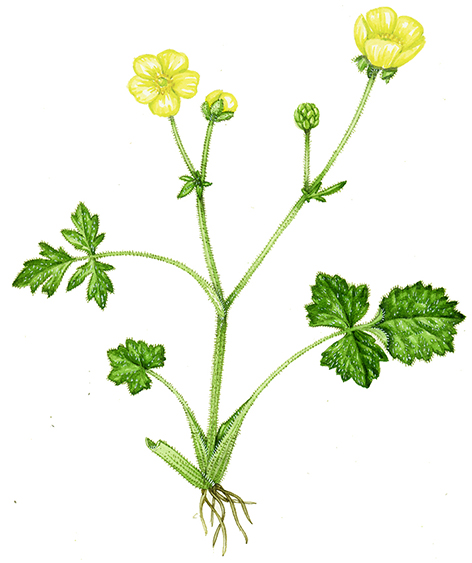 Basal leaves are on stalks and divided into three lobes, the central one having a stalk longer than the others.

All the stems are obviously hairy, with hairs never flattened to the stem.  The flowering branches are almost furry, and deeply furrowed.  The sepals are very reflexed once the flower is open.  Because of this, they curve backwards from the petal towards the stem.  Petals are a paleish yellow.

Achenes are almost round, are brown and have a distinct green border.

Hairy buttercup isn’t as widespread as the Creeping or Meadow buttercup, except near the S and E English coasts.  It can be found in damp places, frequently on waste land. 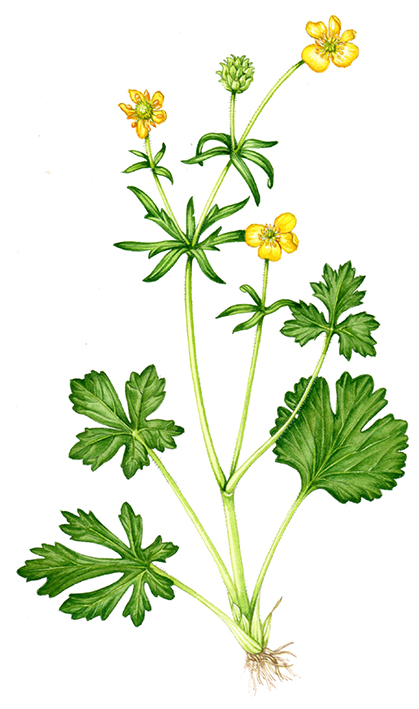 The leaves of this plant are very variable in shape, and are mostly basal.  The leaf shapes of a plant are inherited maternally.  The lowest leaves are carried on long stems and are mostly rounded or kidney-shaped.  Some leaves may be tri-lobed as with other buttercup species, but there’s lots of variation from plant to plant.  Higher up the stem the leaves tend to be pretty thoroughly divided into complete segments.

The stems are hairy.

There aren’t many flowers, and the size, number, and shape of the petals on each flower varies enormously.  Some flowers bear no petals, some bear up to five.  These are often unequal or look withered or distorted in shape.  The nectar scale at the base of each petal is tiny or absent.

The achenes are attached to long projections.  However, like other buttercups, are carried in a globose head.

Goldilocks is found on moist, rich and calcareous soils; in thickets and heavy hedged areas.

I’ve not illustrated or researched the Rough-fruited buttercup R. muricatus, the Corn buttercup R. arvensis, the Jersey buttercup R. paludosus, or the Small-flowered buttercup R. parviflorus.  There’s plenty to know, it’s in my botanical bible (where I did the research for this blog), Flora of the British Isles by Clapham, Tutin & Moore.  If you prefer a source with pictures, Collins’ Flower Guide by Streeter.

I have, however, illustrated two of the closely related Spearworts.

The Great spearwort Ranunculus lingua is a water-loving plant. 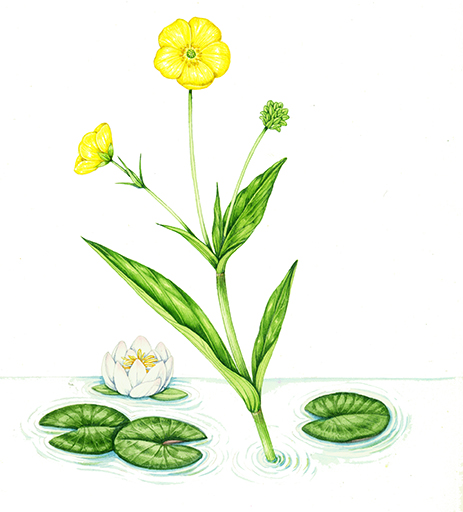 Rhizomes of Great spearwort grow through the mud, and put out long basal leaves in autumn.  These are often below the water.  They have gone by the time the plant flowers.

Stems (sometimes flushed red) emerge in spring.  The leaves on these flowering stems are lanceolate.  They have short stems or clasp to the stem with no stalk (sessile).  Leaves have entire margins or slightly toothed edges.

Flowers are few but large, sepals are concave.  As with the buttercups, the achenes are carried in a rounded head.

Great spearwort is common in wet margins on lakes, ponds and streams where silt has accumulated.  It is also found in fens and marshes.

Lesser spearwort  Ranunculus flammula is often found in similar habitats to Great spearwort; but is a more widespread and common plant. 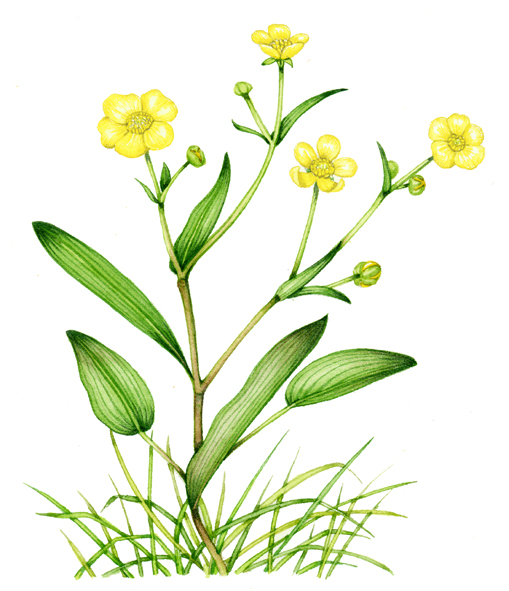 The basal leaves of lesser spearwort are oval or rounded, and the higher up the stem you go the shorter the leaf petioles become.  Higher leaves are lanceolate, sessile, taper to their bases, and sport parallel veins.

The plant grows in a sprawling way from stems.  These can be tinged crimson, and can root at nodes.

Sepals are green.  Petals are a paler yellow and shinier than the Great spearwort.  The flowers are smaller, and carried on slightly hairy, furrowed stalks.

Again, achenes are carried in a globose head.

There are more members of the Ranunculus subgenus that I’ve not illustrated.  Slender creeping spearwort R. reptans, Adderstongue spearwort R.ophioglossifolius, and the Celery-leaved crowfoot R. sceleratus.  Perhaps, if I get commissioned to illustrate these and the other buttercup species in years to come I’ll add them to this blog?  Now as I write, in February, the Lesser Celendine Ranunculus ficaria is just coming into bud.  It can be spotted on wayside verges with its pretty heart-shaped leaves.

For now though, I hope this blog has given an overview of some key members of the buttercup and spearwort family.  Hopefully you might have pause for thought before just labelling another yellow flower as “a buttercup”?  I know I’ll have to check, having written this, I’ve got no excuse!