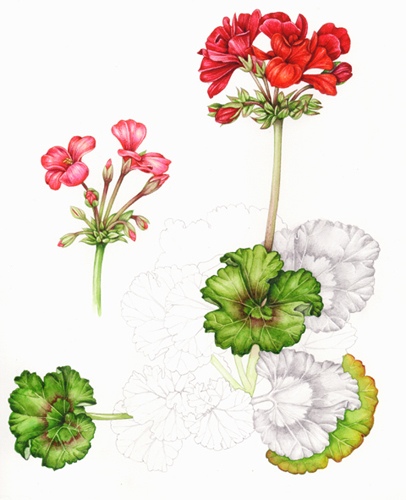 Winter closes in, and many of the plants I need to illustrate for The Cultivated Forager (follow up to The Hedgerow Handbook, also by Adele Nozedar) are no longer much use as they are bearing neither flowers nor berries.

Flowers which are still in bloom

However, I was surprised to notice various plants which are most definitely in flower, despite the frosts we’ve had.  They must be very hardy, or have evolved to proffer their blossoms at a later point in the year, when any insect pollinators will be grateful for them.  Herb robert is still out in some abundance.

Ivy is (obviously) out, and even now is visited by the occasional chilled fly.  In early autumn I love walking past walls covered in ivy and hearing the low buzz of thousands of flies, hover-flies, and bees all busy at the ivy flowers.  To my taste, they have a slightly sickly smell, but it clearly works for these insects. 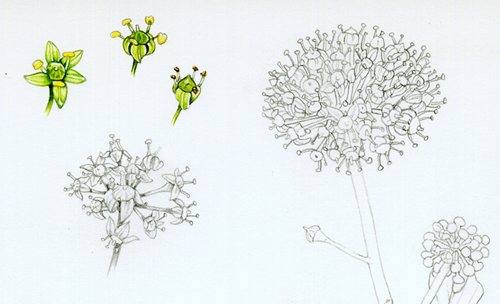 Flowers blooming in the garden

In the garden, the seasons seem to have a negligible effect on the cutlivars growing.  Primrose are out in profusion, although they’ve been so pecked at by our resident sparrows that it took me a while to realise they were in bloom. 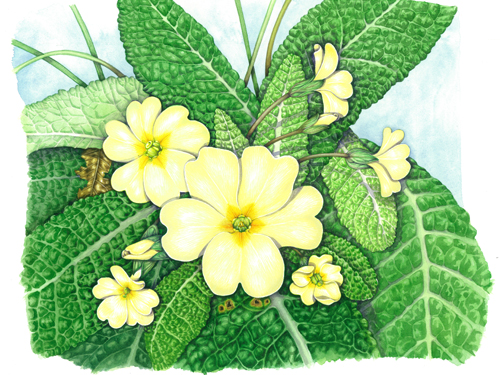 In some belfast sinks in the front garden, amongst the mint, there are a few geranium plants which are still putting out flowers.

The raised bed in the back garden is already thick with the leaves of forget-me-nots; although I know they’re weeds, they’re so beautiful that I find I encourage them rather than pull them up.  In their midst, quite why I’m not sure, there’s a very small begonia which is assuredly in flower. 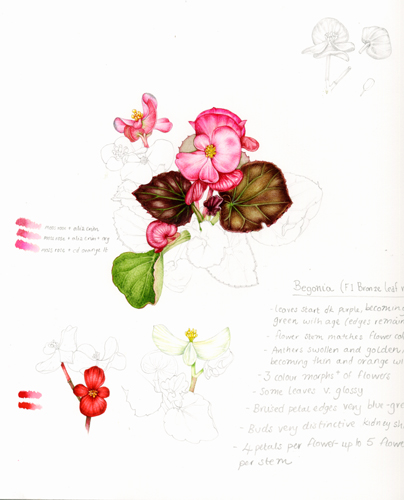 I also have spied a mahonia smothered in pale yellow flowers, and seen the odd nasturtium braving the frosts.  So although winter is upon us, I find it somehow heartening to see these few plants continuing to proffer their flowers to the frost morning air.

For a much more comprehensive selection of my botanical illustrations please browse my website, and to see my sketchbook studies either check out my website or look at them on Pinterest.