Illustrating Birds on the River Wye 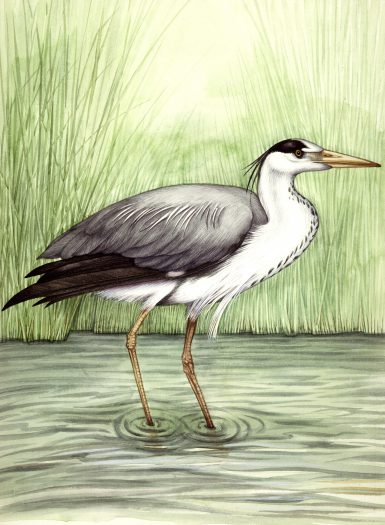 It’s always a joy to see the birds I’ve depicted in the flesh (in the feather), and this often happens by the river Wye.

I go for a swift jog every Wednesday morning, and my route takes me to a lovely stretch of open land called the warren, which abuts the shingled beach of the Wye.  It’s common to see birds there.

This week I saw a dipper balancing in the rapids, searching for tiny crustaceans among the pebbles

Overhead, the plaintive mew of the buzzard is a common sound, although I’ve never seen one perched near the river.

I saw a pair of tiny wrens recently, flitting amongst the dead bracken.  They’re so small that I was momentarily confused, and thought maybe they could have been some enormous insect; but when I paused to spy on them there was no mistaking the secretive little birds.

The path winds up past some beech trees, and there’s an area of still muddy water; there are always mallards hanging about, and making a terrific fuss as I pass; squawking and flying off up river.

I’ve seen busy grey wagtails further upstream, where the water runs fast and shallow over wide flat rocks, but never down by the warren; I have no reason to think they don’t pop by to pick amongst the stones, their tails bobbing in that distinctive manner.

Grey heron are frequent visitors all along the Wye.  In the summer, as I was swimming alone, one flew so close overhead that I could have reached up and touched it.  These birds look almost robotic in flight, all heavy and angular.  Further down the river, near the canoe landing stage, there’s often a heron either fishing in the shallows or, somehow incongruously perched in a tree.

Back in town, as I jog down the hill, I pass a rookery.  Late spring and it’s overwhelmingly loud, squabbling birds flapping and shuffling about; but this late in the year it’s far more subdued.  The shapes of the ragged nests are stark amongst the bare branches.

There’s a much larger range of my bird illustrations available on my website; and a youtube video of some of my favourite pieces online.