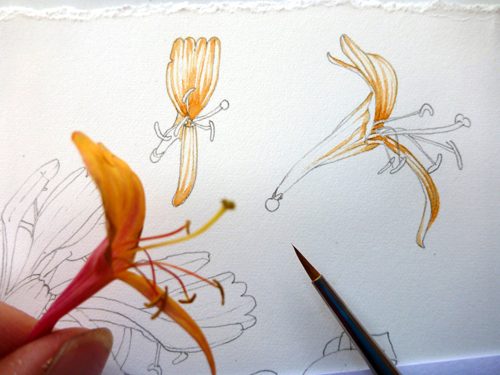 As mentioned in earlier blogs (Step by step illustration of a rose, Step by step painting a sweet pea), I’m currently working on a series of common cultivated plants which are also edible.  Honeysuckle is on the list.

I love honeysuckle (wild and cultivated), I love the way the pinks and reds flush on the flowers, I love the smell, and I love nipping off the base of the corolla tube and sucking out a drip of delicious nectar which was absolutely not intended for me, but for the bees who so effectively pollinate the flowers.  (Speaking of which, if you ever want to read a fascinating book on bumblebees, do get a copy of Dave Goulson’s “A Sting in the Tail”).

The shape of the honeysuckle flower is very specific and instantly recognizable.  I wanted to be sure I had lots of information on this, so also did some studies away from the main, or habit drawing.  These will be coloured.

Next I plot the dark areas which are pink.  This pink is a wild colour made from crimson watercolour, cadmium orange light, and some moss rose Doctor Martin Ink.  The darkest regions are the base of the corolla tube and the tips of the petals.

Here, I have to admit to a techonological glitch.  I lost most of the step by step photos I took for the honeysuckle painting when I dropped my camera in a rockpool.  So this is a somewhat truncated blog (and probably much improved for that!)

Working on the plant in the illustration

This is the finished flowers.  Once the pink detailing was done, I used a very pale golden watery wash to unite the flower, keeping the whites pale.  This was moss rose ink mixed with cadmium orange light.  Next I worked into the details of the stamens, anthers, and pistil.  It’s interesting to look hard at these details when illustrating a plant, often they change colour and shape with age; with honeysuckle the pollen changed from cream to golden and the stamens turned form orange to a dark maroon, and became much thinner.

Now the habit sketch and details of the flowers is completed, it’s time to work into the leaves, which are a very bright green, and examine some buds.  The leaves were a treat to do, a network of cells, fading from dark green near the main veins to a far brighter yellow at the leaf margins.  The very margins are alizarin crimson.  The buds were fun too, all that pink.  I do think it was necessary to add the flower head in bud as it is very different from the shape and feel of the flowering head in bloom.

As always with my sketchbook studies, I made some notes as to the growing habits of the plant (the leaves were very interesting in this specimen, being similar to the Blackstonia in that they are fused around the stem) and colour mixes I used. 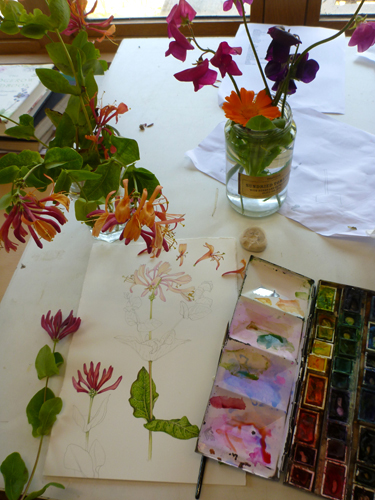 This is my desk once finished.  Other specimens hanging about in old jam jars, withered bits of flowers I’d examined, a well used and rather grubby watercolour paint box, sheet of plain printing paper that I rest my hand on when drawing so as to avoid smudging the illustration.  And, as ever, just out of shot, a nice cup of tea.