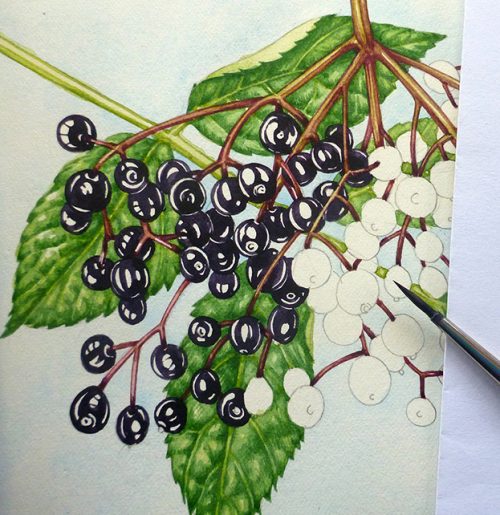 Trees: Elder is another blog inspired by my illustrations for “The Tree Forager” by Adele Nozedar, published by Watkins.  The book has inspired me to think about some of my favourite trees.  The Elder Sambucus nigra is the sixth in this series, along side the Sycamore, Ash, Hawthorn, Rowan and the Oak.

The Elder Sambucus nigra is common in hedgerows and woodland, and appears as a shrub as often as a tree.  It has strongly scented blossoms in spring, deep purple berries in autumn, and pale wood.

There’s an enormous amount of folklore associated with this species, and it’s a firm favourite with both foragers and those interested in herbal remedies. 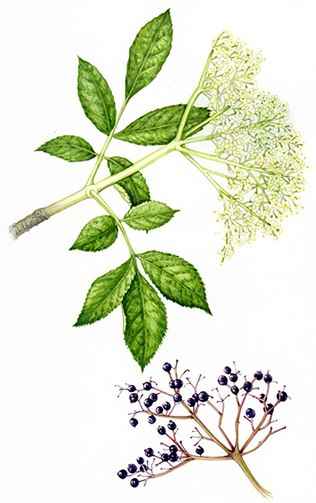 Elder grows as trees up to 10m, or as shrubs.  Branches are often curved, and the wood is brittle.  Elder trees have short trunks or “boles”.  Compared to other tree species, elder don’t have loads of branches, and these grow from low down. 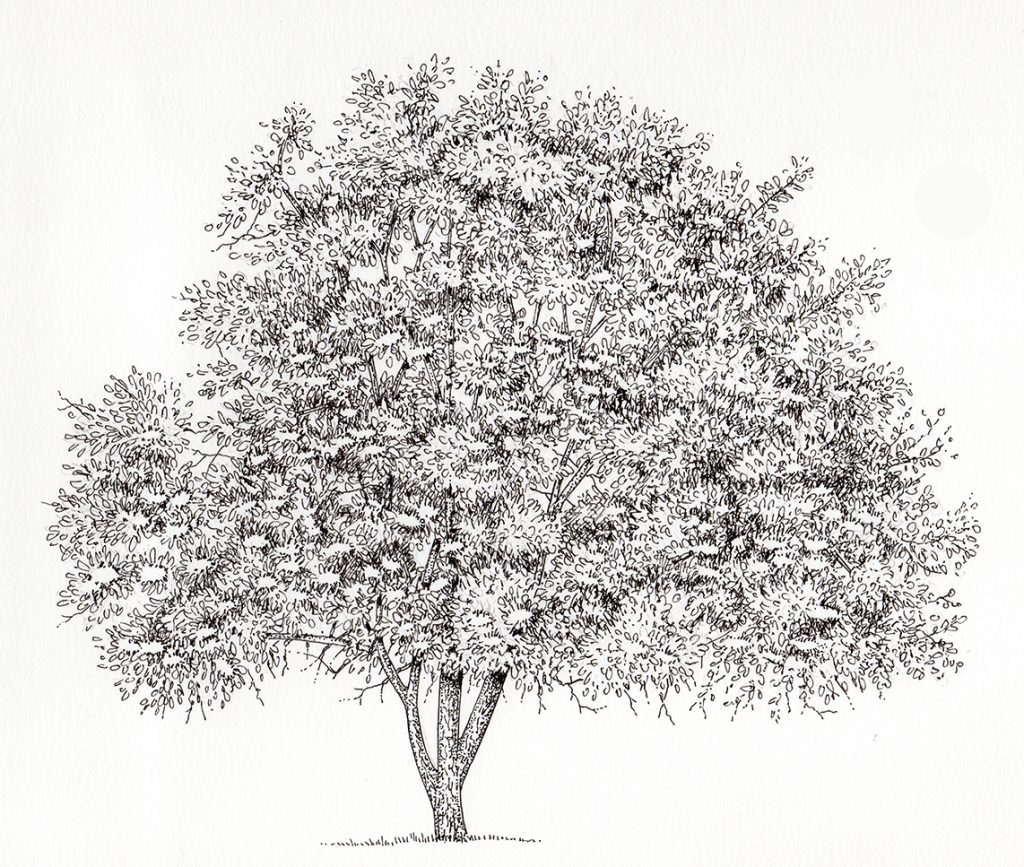 You often see Elder trees in thickets or scrubby woodland, or growing alongside streams with a variety of other species.  If an Elder is given space and light, it’ll grown into a tree.

Elder shrubs are common too as the species shows in both growth habits.  Lots of branches emerge at ground level, forming a thicket of a bush.

This species loves nitrogen-rich habitats, and will colonise anywhere where people have lived, or where nitrogen levels are high in the soil (such as fields where animals have been grazed).  It grows fast, and establishes itself quickly.  If you see a tree growing from a wall or in a farmyard, it’s very likely to be an Elder.

Elder leaves are compound, that is made of lots of leaflets (for more on leaf shape, check out my blog).  In this case, there are 5 to 7 leaflets, with one terminal leaflet.  Leaflets are opposite each other.  Although the leaves have a relatively long stalk, each individual leaflet lies close to the stem.  Each leaflet is 3 to 9 cm long. 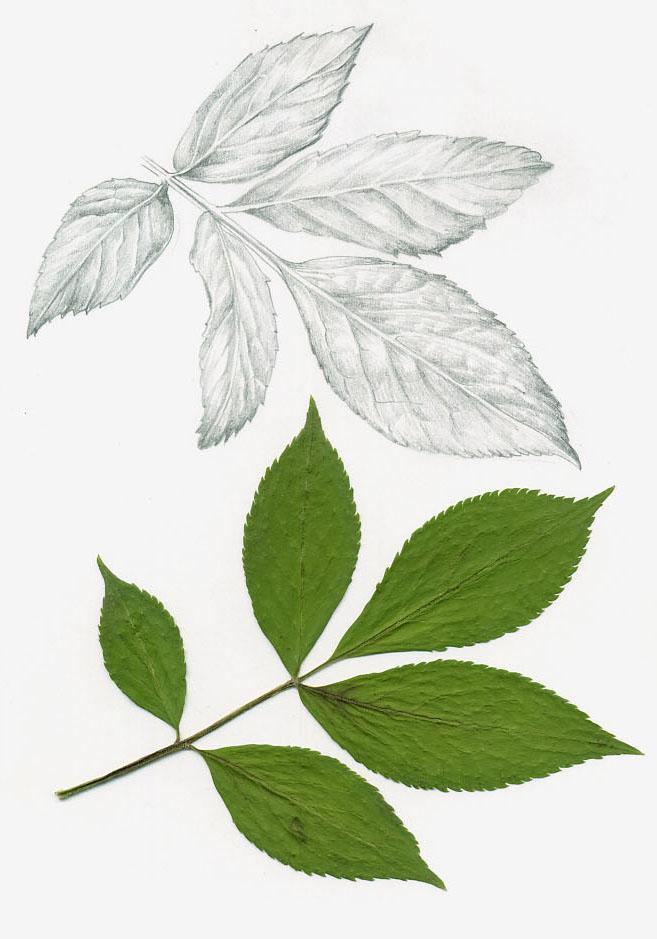 The leaves of Elder are oval and a bright pale green.  They’re toothed along the margins. (Click here for my blog on leaf veins and margins). 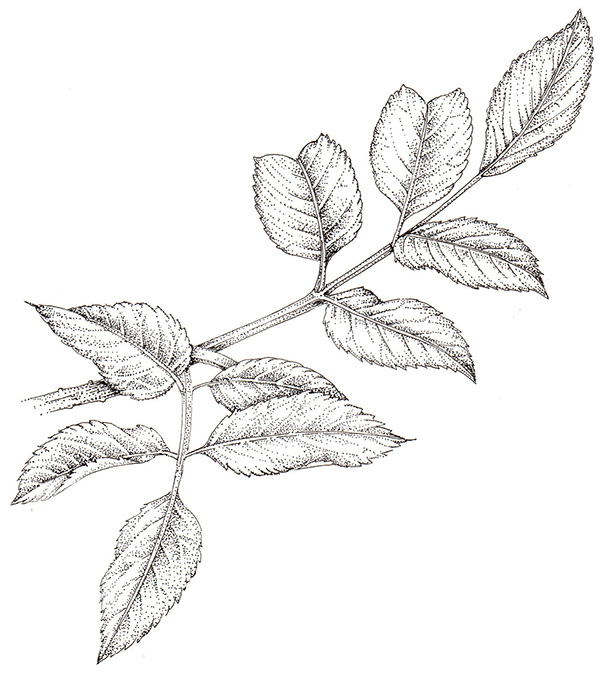 Elder branch with two compound leaves (each made of five leaflets)

The venation of the leaves isn’t very obvious, and is rather similar to that of lots of other oval leaves.  Side veins branch from the central mid-rib, and are mostly opposite one another. 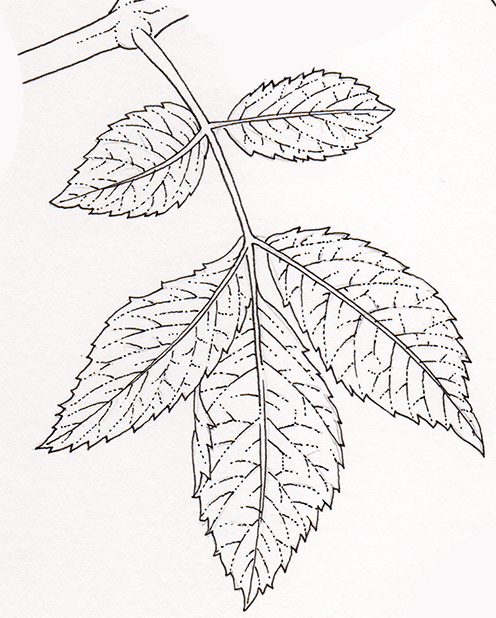 Some people think Elder leaves smell nasty, and although they do let off a pungent odour when bruised, I wouldn’t call it unpleasant.

The creamy froth of elder flowers is instantly recognizable, by smell as well as by sight.  The smell is a heady perfume, and one of my favourite scents of summer.

Flowers cover the tree or shrub, borne in flat-headed umbels. Each umbel is 10 to 20 cm across; individual flowers are 5mm across.  Looking into the branching structure, you can see there are five main rays to each umbel. 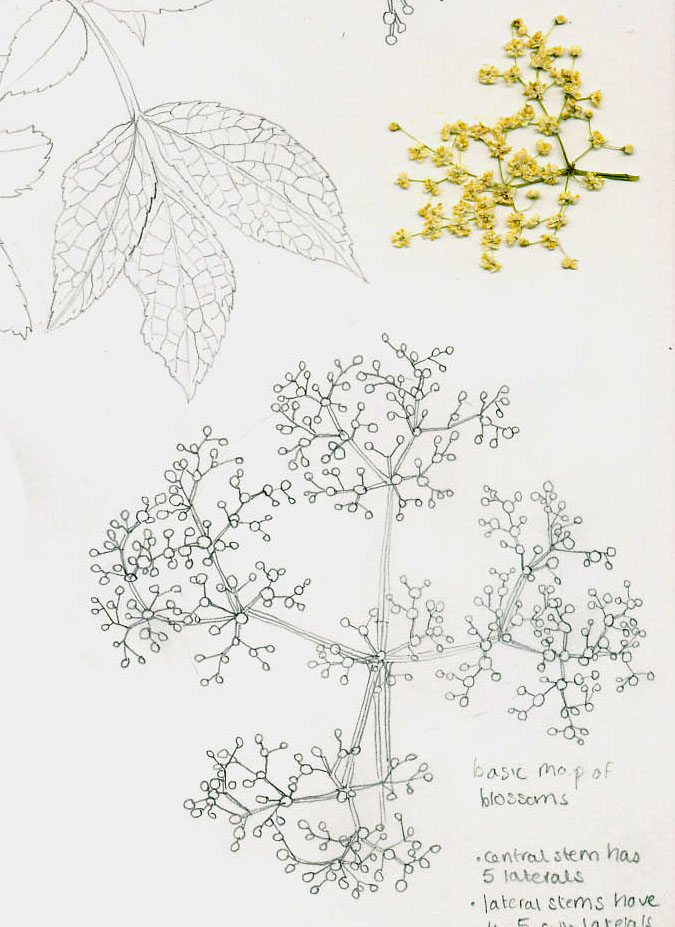 The flowers are closely packed, and have cream or white petals.  Anthers are a creamy colour too.  Each individual flower has five rounded petals, and 5 stamens.  Anthers protrude beyond the petals, helping the umbel look even frothier.

Small flies pollinate the flowers, which may explain why the scent of the blossom is so heady and heavy.  Elderflowers appear in May or June and will be in flower for 4 to 6 weeks. 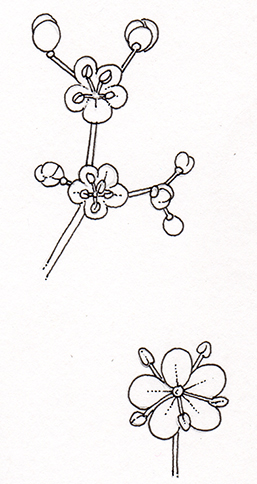 Elderberries are shiny and black when fully ripe.  The branches they’re borne on are frequently flushed dark magenta.  Unripe berries are crimson.  Each berry is square-ish, and very juicy. 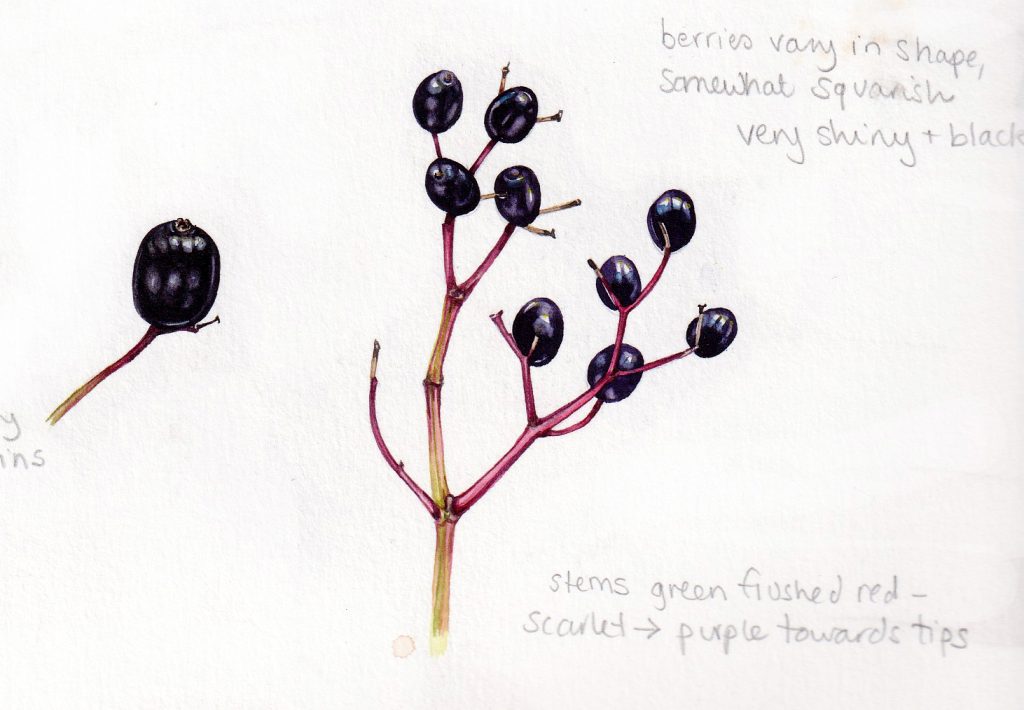 It’s really common to see elder berries in partial umbels – lots of the berries will have fallen off or been eaten; the remainders look scruffy because of the empty stalks along side them.  They last well into late autumn, eventually shrivelling or falling in the frosts. 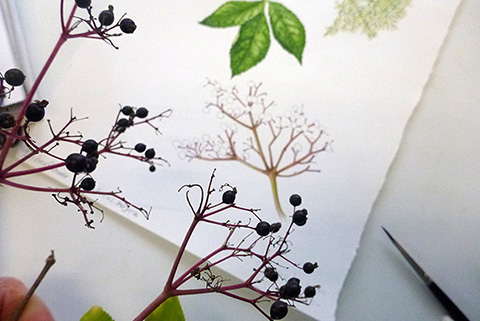 Working on an elderberry illustration

The berries are very rich in vitamin A and C and provide a vital food supply for birds and small mammals.  However, they are also quite sour, and both leaves and berries are rich in Hydrogen cyanide.  This can cause vomiting in people.  For a fascinating look at poisons in our everyday foods, check out this BBC Future article I stumbled on.

The bark of an elder tree is thick, smooth and corky; deep ridges develop with age. The branches are smooth, with pithy insides.  This pith can be removed to leave a hollow twig, and elder wood has been used for centuries to make whistles and musical instruments.

Twigs have obvious lenticels and are thick and greyish, or greenish.

The jelly ear fungus Auricularia judae is a brownish jelly-like fungus that often grows on elder and I use it as another way to identify the species.

Some other tree species also have frothy white blossoms.  The Rowan does, but the flowers are far less scented, and the tree rarely grows as a shrub.  Guelder rose also has panicles of white flowers, but these are much larger blossoms and the leaves are a totally different shape.  The berries are orange and scarlet, never black.  However, as Guelder rose also forms a shrub, it’s worth a mention. 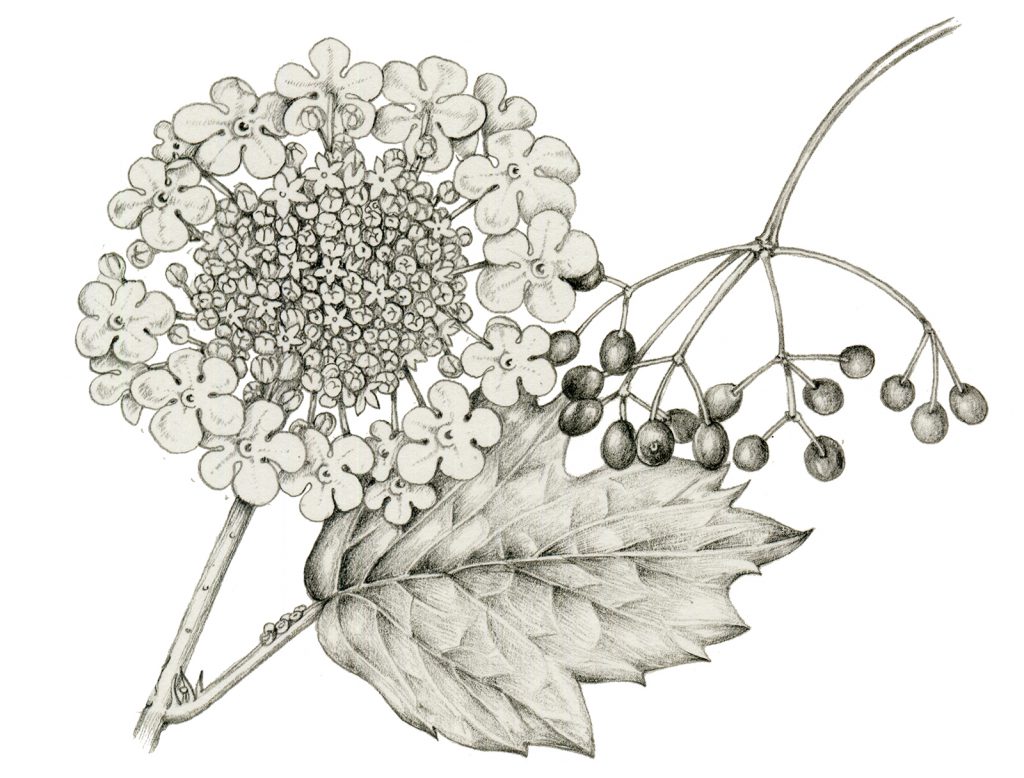 Ash Fraxinus excelsior, Walnut Juglans regia, and Rowan Sorbus aucuparia  also have compound leaves, but the walnut leaves are arranged in an alternate pattern.  Ash leaves have more obvious veins and feel less “flat” than elder.  Rowan leaves are smaller and sharper.  All have toothed margins, but with a little experience you’ll notice differences between the shape and sharpness of the teeth. 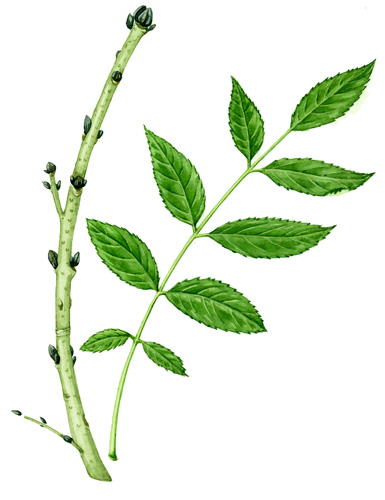 Like Hawthorn and Rowan, Elder is alive with folklore and history.  It’s interesting that all three of these trees produce highly visible white blossoms and distinctive colourful berries.  I guess they were easily recognized, common, and therefore very much in people’s awareness for millenia.

Elder has long been associated with “the little people”, and those who believe in faery folk will be very familiar with it.  If you were lucky, you might see the Queen of the Fairies passing by under an elder on Midsummer eve.  Lots of references advise against sleeping under an elder; this also relates to belief in other-worldly peoples. 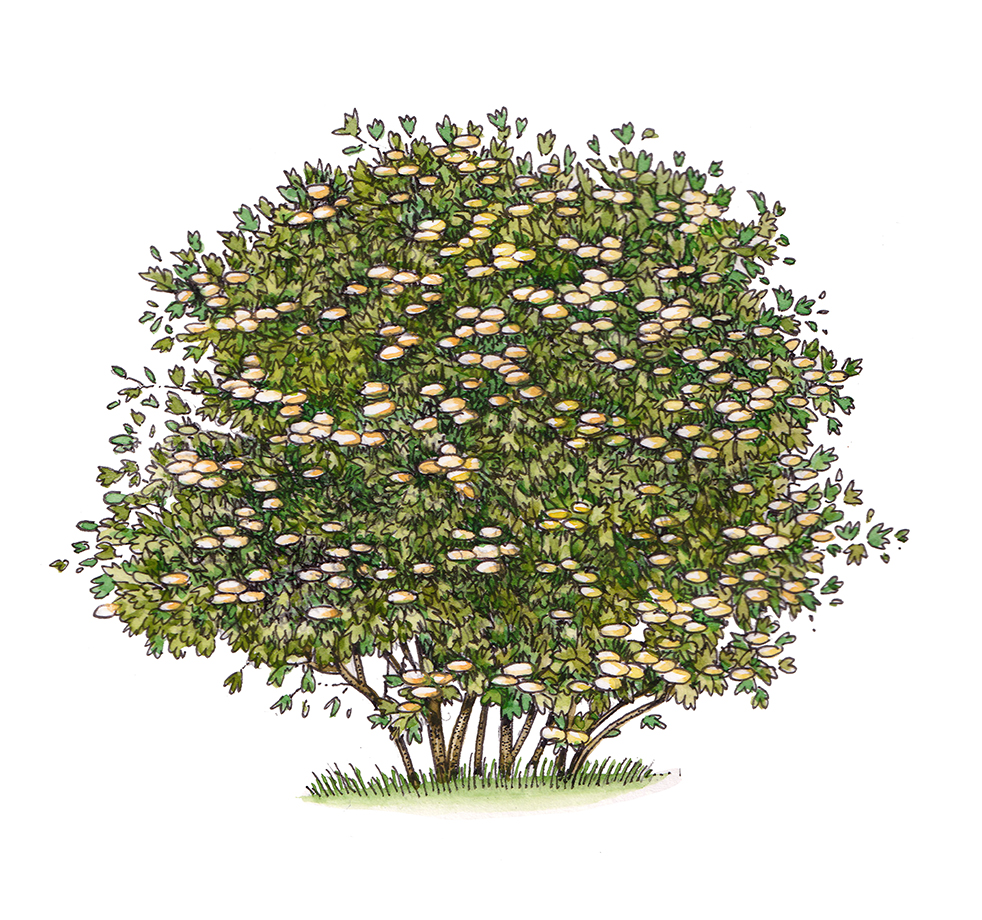 If you had to chop down an elder tree, you were supposed to ask permission from the Elder mother, a female spirit that inhabited the tree.

It was seen as a protective tree, and would be planted near houses and dairies.  Cheese cloths would be hung to dry on elder branches, and it was thought to prevent the milk form turning.  Interestingly, the elder leaves do repel flies, so these beliefs could have contributed to the hygiene of the dairy.  Herdsmen would carry elder switches. 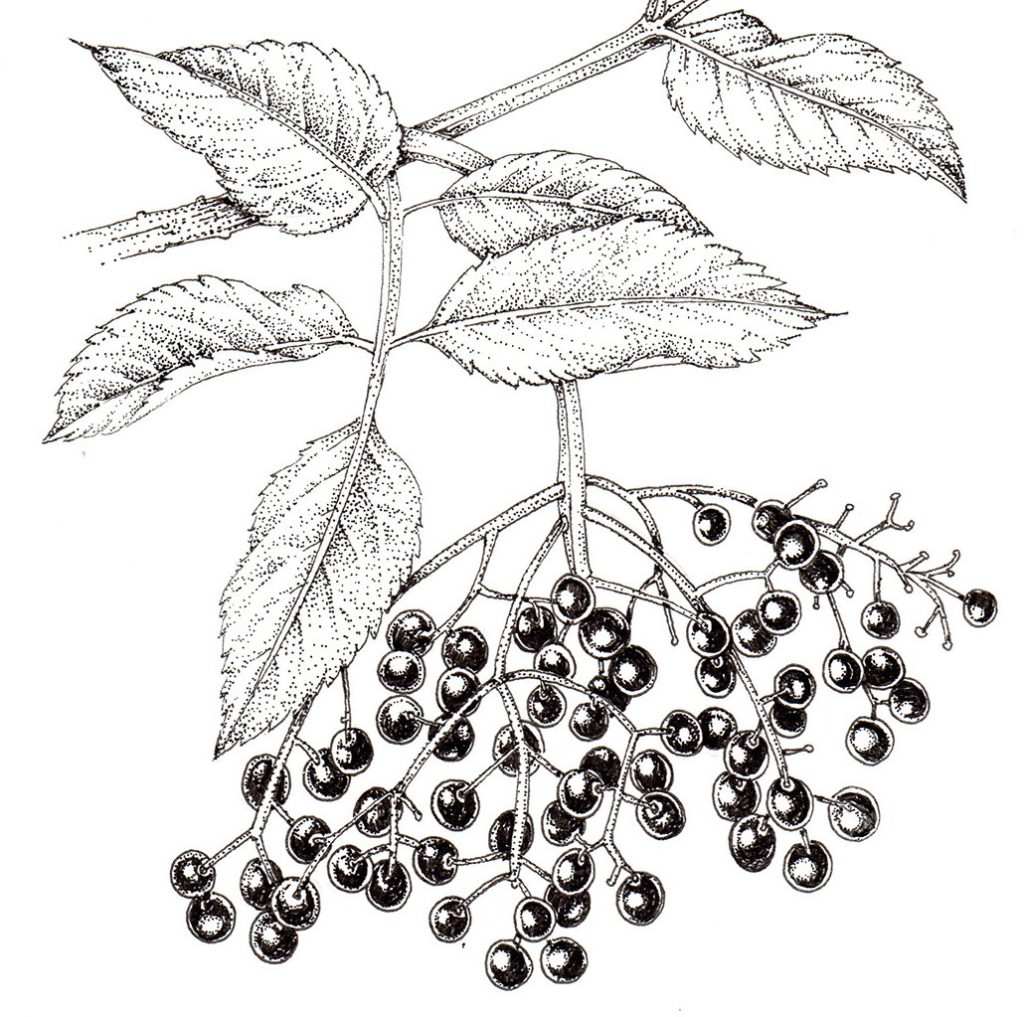 However, there was a darker side.  A child beaten with an elder stick would never grow.  Judas Iscariot was said to have hung himself from an elder tree, and criminals were crowned with elder as a symbol of their shame.  Again on a Christian theme, there was a suggestion that the cross on which Jesus was crucified was elder wood.  It was not to be brought into the house, and if you burnt it you were sure to see the devil.  Witches could transform themselves into Elder.

The rule of thumb was to treat the elder with a healthy dose of respect.  And caution.

The flowers of the elder can be used to make a lovely scented champagne, or fried as fritters.

Once heated, the berries can be reduced into deliciously strong-flavoured jams and jellies and syrups. 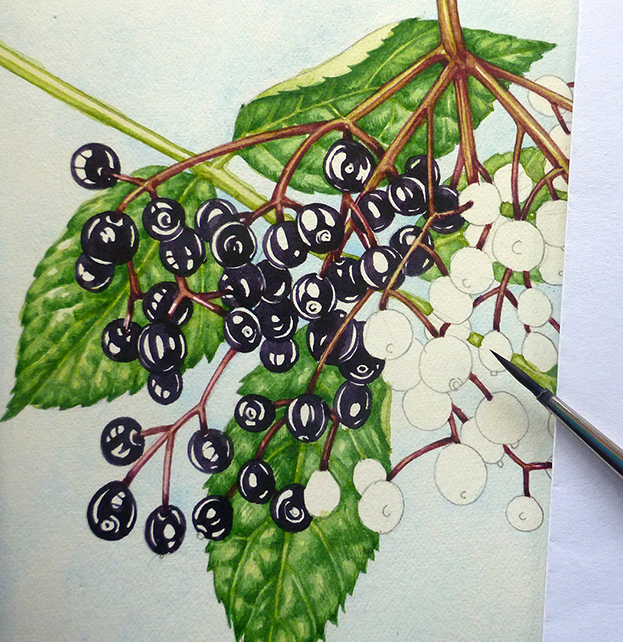 Flowers and berries are made into drinks and cordials.  Until 1900 you could buy spiced elderberry wine in the streets of London.

The most famous elder drink is the spirit Sambucca, made from elder berries and aniseed.  Traditionally, this is presented with one coffee bean and is set on fire as it’s served. 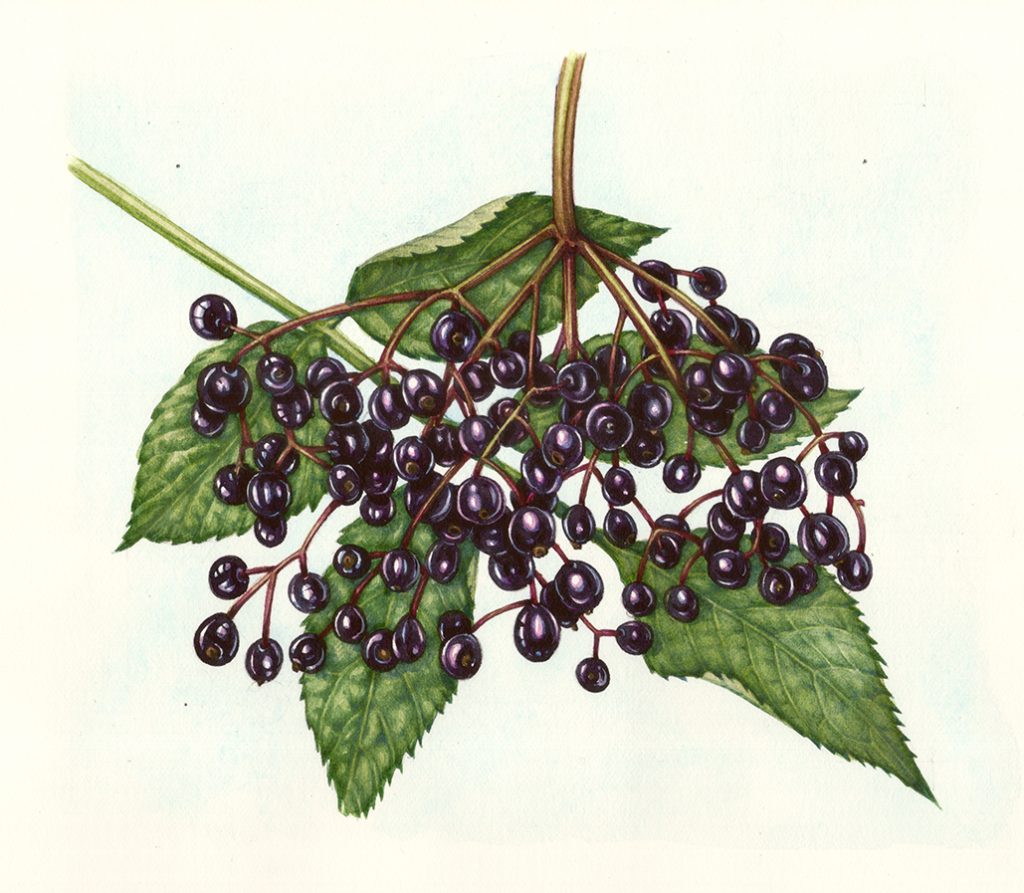 Most parts of the elder have been used for medicine.  There’s some suggestion that even the ancient Egyptians used elderberries medicinally.  The medieval herbalist John Evelyn described elder as, “a kind of Catholicon against all Infirmities whatever”.

Berries are high in vitamins C and A, and (once you’ve destroyed the hydrogen cyanide by heating) are used to cure a plethora of conditions.  Sore-throats, coughs, respiratory problems – all were treated with elderberry syrup or “rob”.  They’re also a laxative, and diuretic.

The bark is a strong purgative.  Leaves can be crushed into poultices that are applied to bruises, sprains, and chill-blains.

Flowers are dried into tea and used to treat colds.  You can also wash your face in water soaked with elderflower to preserve your youthful looks.  Even today, elderflower is used in eye and skin lotions.  Some say that if you soak elderflower in cold water it helps relieve symptoms of hay-fever. 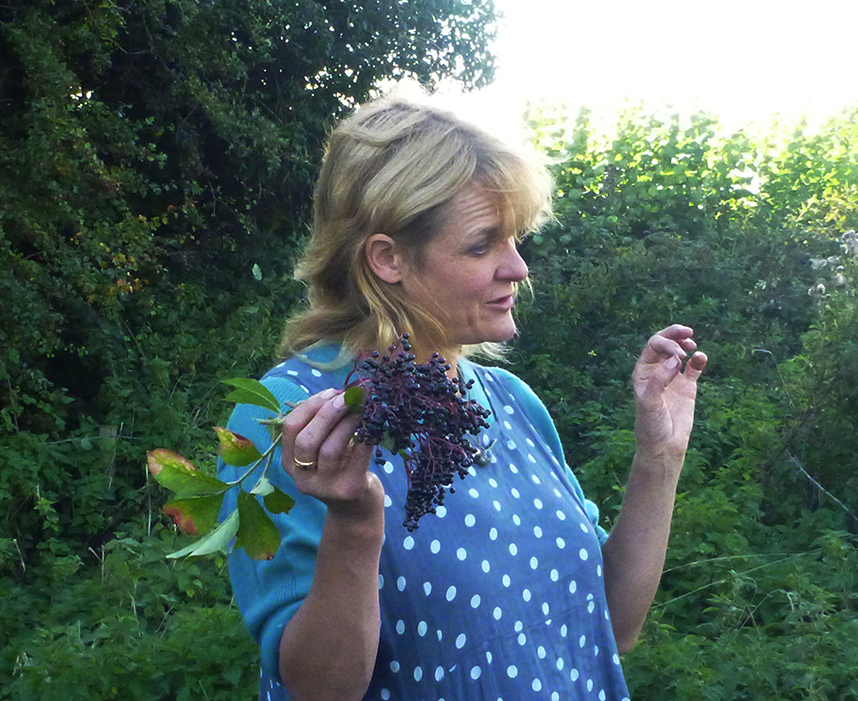 Adele Nozedar, whose books I illustrate, foraging for elderberries

Elder is rich in anthocyanins and antioxidants, both of which are known to boost the immune system.

There is a lot of pith in elder branches, which means when you hollow them out they make good musical instruments.  Children made small toys and penny whistles from elder wood.  The wood was also used to make pipes, pea-shooters and bellows.  Small spoons, and combs were sometimes made from elder wood.

The pith was used as a blotter, and to hold botanical specimens whilst they were being prepared for microscope slides or botanical sections. 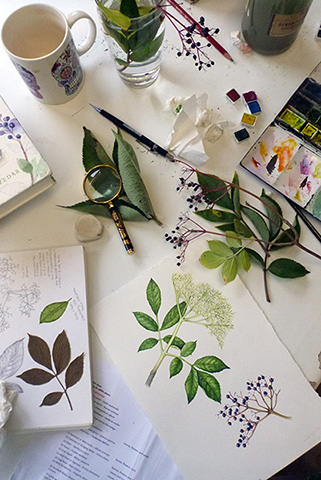 Harder mature elder wood was sometimes made into cogs for machines.

The leaves contain natural fly repellent which probably explains why they were so often planted near houses and stables.

Finally, the elder is really useful as it produces a whole variety of different dyes.  The leaves give a green hue, flowers produce a lilac colour.  The berries make for deep and fade-resistant black and purples.  And even the bark was used to make black dye, used either for dying wool or ones hair.  The highly esteemed Harris tweed used elder to dye its’ materials, even though elder trees are less common in northern Scotland than in the rest of the UK.

The berries are eaten by birds and mammals, and the leaves are food for the Buff ermine, dot, White-spotted pug, and Swallow-tail moth caterpillars.  Insects drink the nectar from the flowers.  Voles and dormice eat flowers and berries. 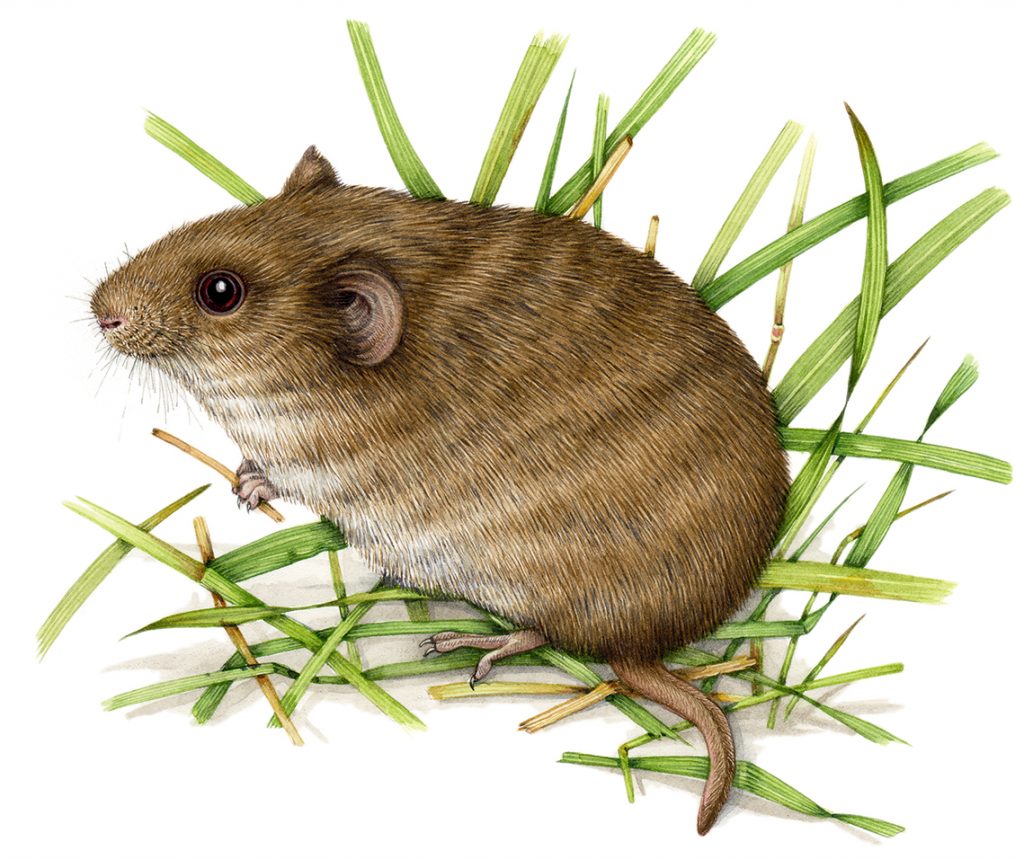 Luckily, not too many things threaten this amazing tree.  Red spider mites can suck the sap of the tree, and blackfly damage leaves.

Elder is an extraordinarily adaptable plant.  It’s been associated with Jesus, witches and fairies.  It can bring good or bad luck.  Berries are poisonous but can be made into delicious syrups.  The flowers can be eaten, used as a beauty treatment, or used against colds.  Elder wood makes toys, cogs, and instruments.  Personally, what I love most about elder is the smell when the flowers are out.  The buzzing of flies, the heavy scent in the air, and the rustle of leaves in a gentle breeze.  It sums up summer for me.

Online sources for this blog include websites of The Woodland Trust, Trees for life, and Naturespot.  Book references for this blog include Adele Nozedar’s The Tree Forager, the excellent The Greenwood Trees by Christina Hart-Davies, and the Reader’s Digest “The Field Guide to the Trees and Shrubs of Britain” (out of print but commonly available second-hand).