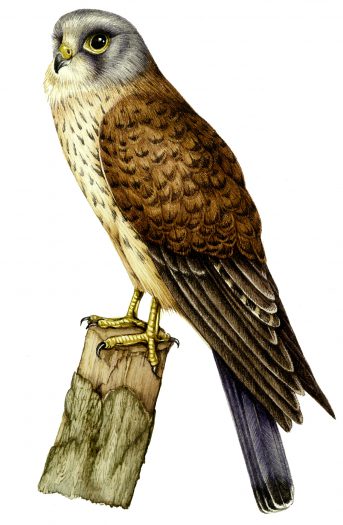 Buzzards, kites, and kestrels in a guest blog from a naturalist who lives near me, in Hay on Wye.  Stewart Roberts has a fabulous facebook page where he posts his photos of animals and plants, and shares some of his knowledge about nature.  He’s been kind enough to write a series of guest blogs for me.

Reed bed with Raptors: Eurasian hobby on the left, Kestrel in the centre

All birds of prey are also known as raptors but that description also covers eagles, hawks, harriers, buzzards, kites, falcons, owls, and ospreys.

Kites and Buzzards are similar medium-to-large raptors that may take live prey but mostly feed on insects or carrion (dead animals). They are the most common birds of prey that we may see in the countryside. Kites can be distinguished by their slightly longer wings and forked tail. Both may ‘hover’ against the wind, but generally they soar on thermals or search for prey from perches in trees or on telephone poles.

The Red Kite Milvus milvus, which in Medieval Britain once scoured the streets of London, was close to extinction in the 1930s.  Luckily, initial protection of a small population in Mid wales was successful. More recently; captive breeding, re-introduction and feeding stations have now seen its populations re-established in most of the UK.  For more on rescuing the Red kite population in Wales, check out the British Bird of Prey Centre’s post.  The Red Kite is known in Wales as Barcud, which is a popular name for a number of Welsh enterprises including housing associations, and a film production company.

It’s penchant for eating carrion earned it the colloquial name of “Shite-hawk” in olden days, and these birds are often seen looking for road kill along motorways. 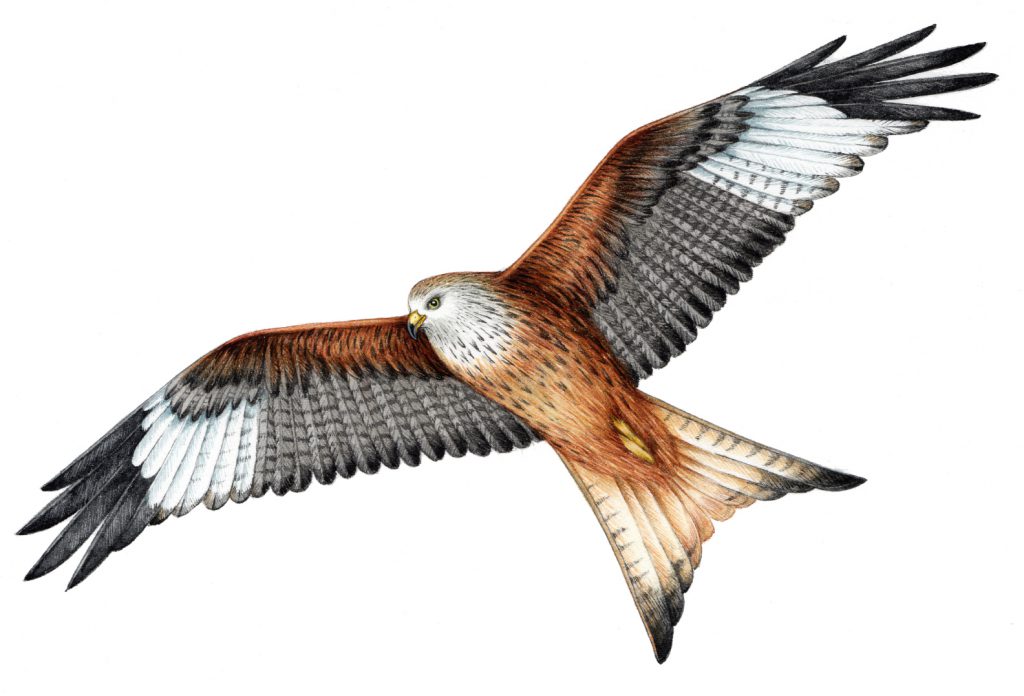 The Common Buzzard Buteo buteo is a native bird that now breeds in every county in the UK.  It is an opportunistic feeder, taking everything from earthworms to small rabbits, and ranges over a wide range of habitats. Buzzards pair for life but will change nest sites frequently even within a single year. They love to soar on thermals and can be seen in large numbers doing so in suitable sites.  However, they will fiercely defend their own territories and nest sites.

In the Spring the young males will put on acrobatic aerial displays, known as “roller-coasting”, to impress females. This involves soaring upwards and then plummeting down; twisting and turning as it descends. Like the Red Kite they have a plaintiff  ‘mewing’ call.  This is recognised in their Welsh name Boncath or Bwncath, ‘cath’ being Welsh for cat. Native populations may be augmented by passage migrant populations at certain times of year.  These migrant species include the Rough-Legged and Honey Buzzard species that may be difficult to differentiate from the Common Buzzard.  Complicating matters further, the Common buzzard  itself has a variable appearance. 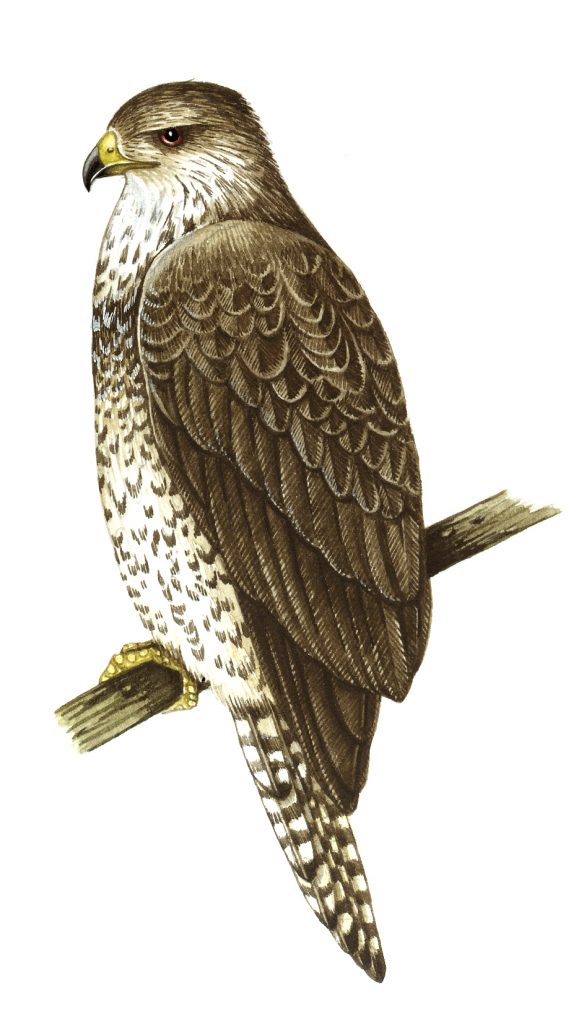 Both Buzzards and Kites are regularly attacked by crow species whose nests they may predate. The crows seem to regard them as an enemy at all times and will often pursue and harass them even outside of the breeding season, sending up ‘fighters’ at the first sign of their flight overhead.

The Kestrel is a smaller falcon that also takes small mammals and insects. It generally hunts by  ‘hovering’ over areas of suitable prey habitat, and then dropping on its prey – largely voles and mice.  A kestrel can ‘see’ near ultra-violet light, which allows it detect urine trails around small mammal burrows. It is estimated that they need to catch between 4-8 voles a day.  These fuel their hovering sort of flight, with rapidly beating their wings, and which uses considerable energy.

The name kestrel is derived from a French word ‘crecelle’, which was a bell carried by lepers (sufferers from leprosy) to warn people to stay away. Kestrels were once used to drive pigeons away from crops. Their other common names are ‘windhover’ or ‘wind f***er’. 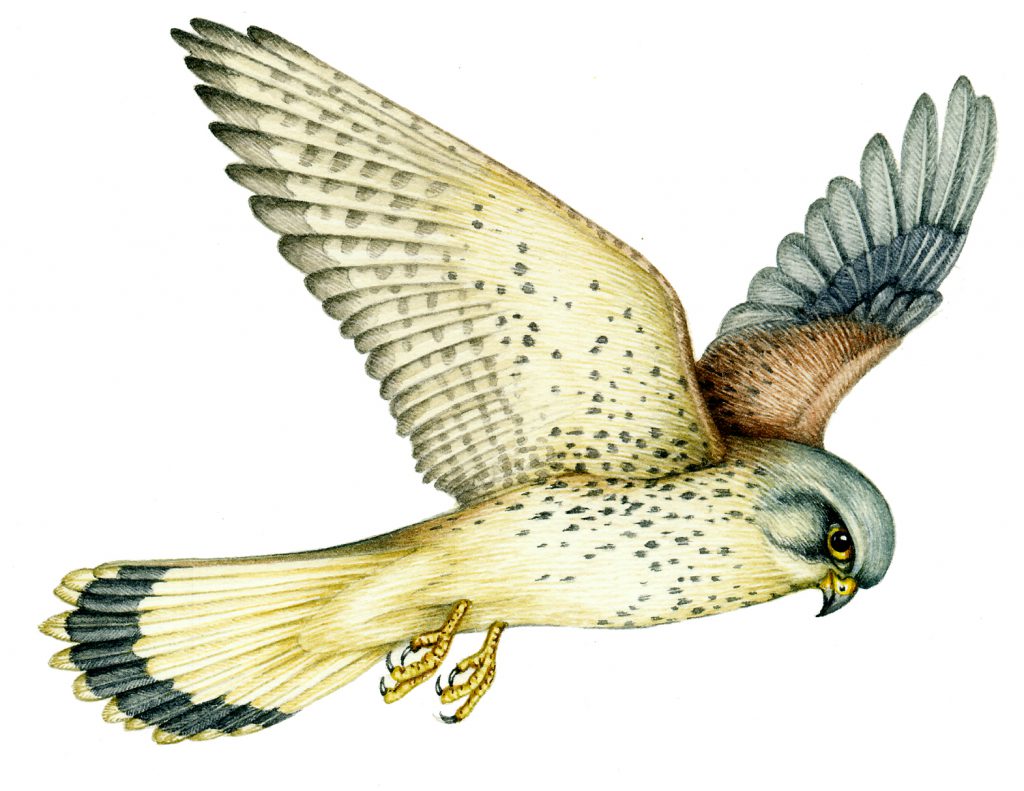 Its scientific name is Falco tinnuculus. Falco derives from ‘falcil’ which we know as a sickle, and refers to their hook-shaped claws. ‘Tinnuculus’ is from ‘tinnulus’ or shrill, which refers to the bird’s cry. In Welsh it is known as Cudyll Coch or the Red Merlin, to distinguish it from the rarer Cudyll Bach or Merlin which is also found in upland areas. 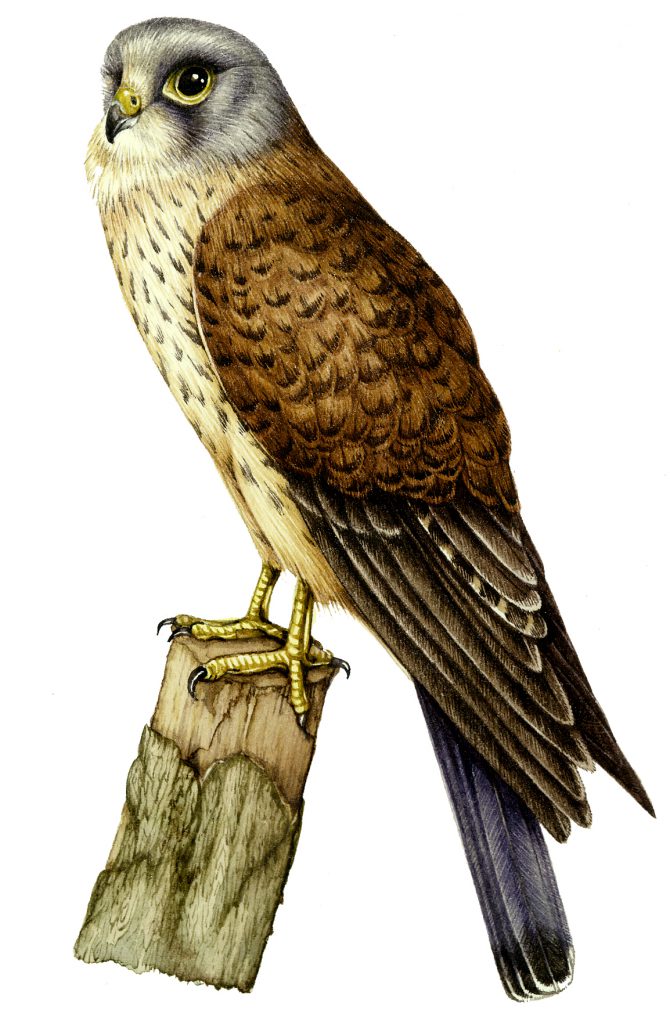 Although the Kestrel is found in upland areas; it can also commonly seen alongside motorways, hovering over adjoining grass verges. Populations appear to have declined in recent years but the causes of this have not been established. Habitat reduction is one factor, and landowners keen to offer suitable habitat should provide grassy cover for small mammals.

So next time you see a bird of prey hovering above, have a look to see which it might be.  the Red kite with its distinctive forked tail, the Buzzard with yellow legs and blunter wings; or the Kestrel whose rounded wings, reddish colour, and straight tail make it an easy one to spot. 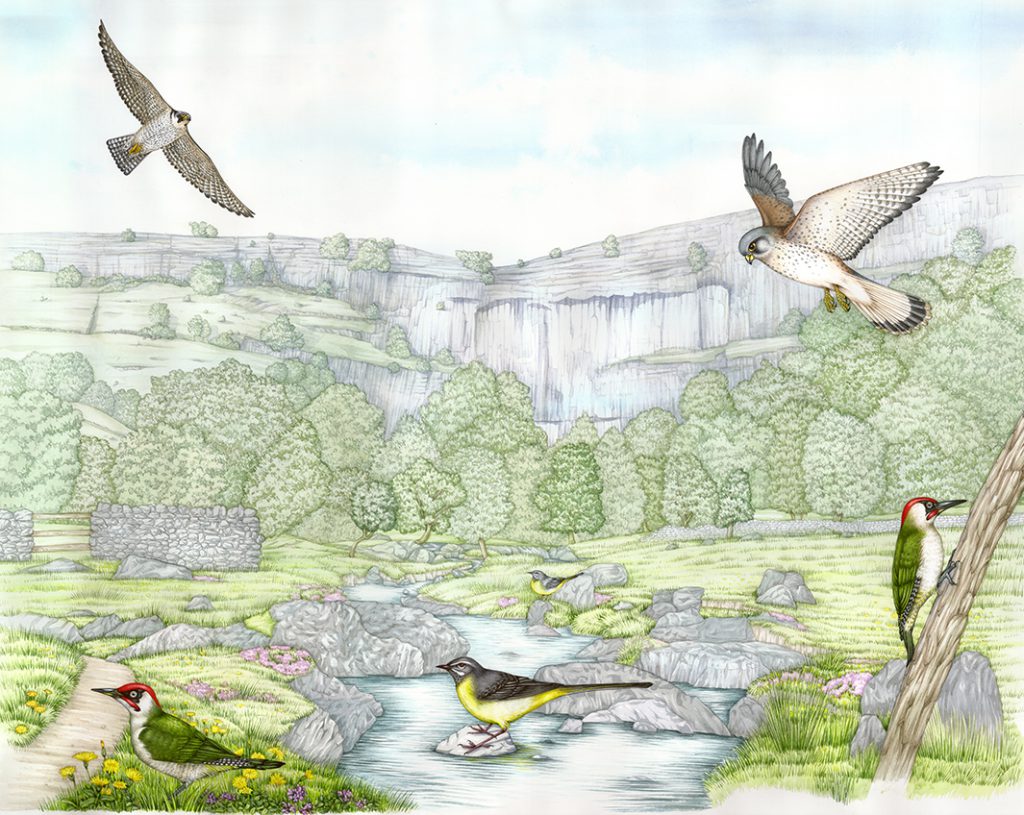 Malham tarn landscape with Kestrel on the right and another bird of prey, the Peregrine falcon, on the left