Illustrations for “30 animals that made us smarter” 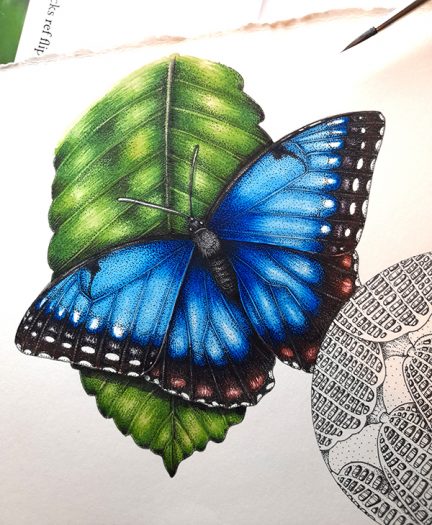 A recent commission saw me completing pen and ink illustrations for “30 animals that made us smarter” by Patrick Aryee.  This fabulous book is based on the BBC World service podcast, and focuses on biomimicry.

Biomimicry is when us humans investigate the marvels of nature, and learn and innovate from these discoveries.  Mosquito mouthparts lead to pain free hypodermic needles.  Shark skin inspires anti-bacterial surfaces.  A lobster eye triggers a new design of telescope.  Elephant trunks form the basis of robotic arms.  A whale fin helps increase the efficiency of a wind turbine blade.  it’s all in the book, and is utterly fascinating. 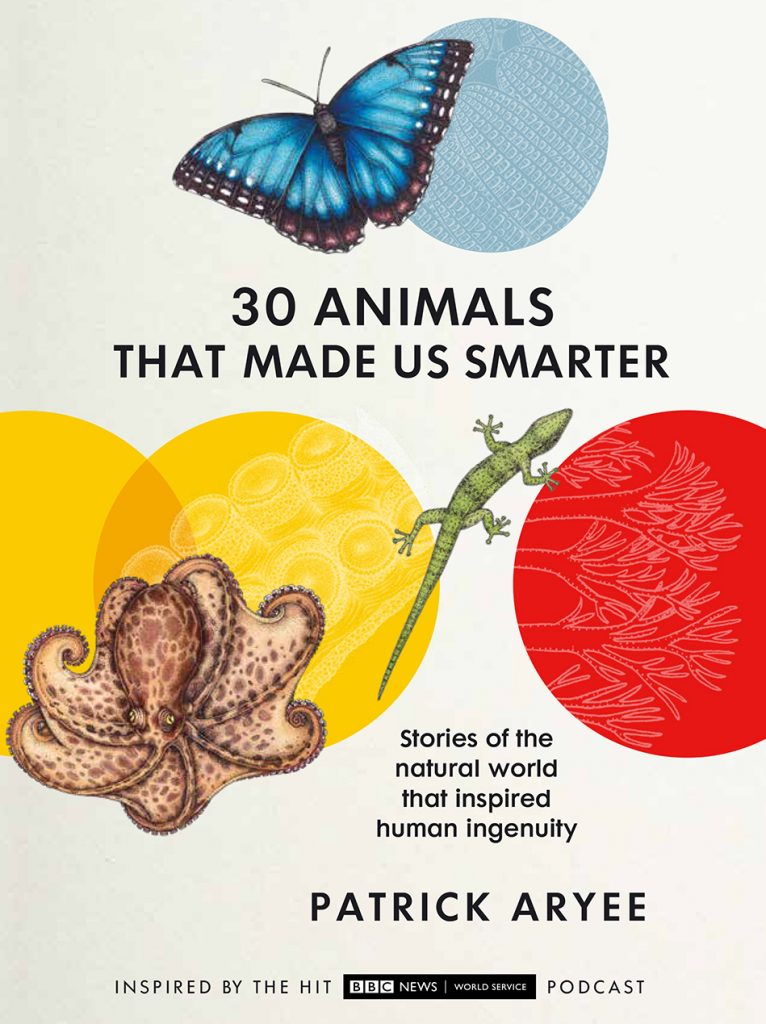 Cover of “30 Animals that made us smarter” by Patrick Aryee

The illustration list was incredibly varied.  There were mammals, birds, invertebrates, and plants to be drawn.  These were the easy part of the commission.  The challenge came when I hit the technical drawings.  These were required, to show how these animals had inspired human inventions.  I found myself drawing an aeroplane’s black box recorder.  Illustrating the roof at waterloo station.  Doing a detailed picture of a fuel injection system.  Coming up with a way to show how a shopping centre’s ventilation system mimicked a termite nest.  I often talk about how steep the learning curve can be on a job; this one was stratospheric.

I was very lucky to have an exceedingly competent and patient art editor who supplied me with lots of reference and explanations.  She tended to pick the best from my pencil roughs, and simplify my offerings into a digestible format.  I cannot thank her enough for this! 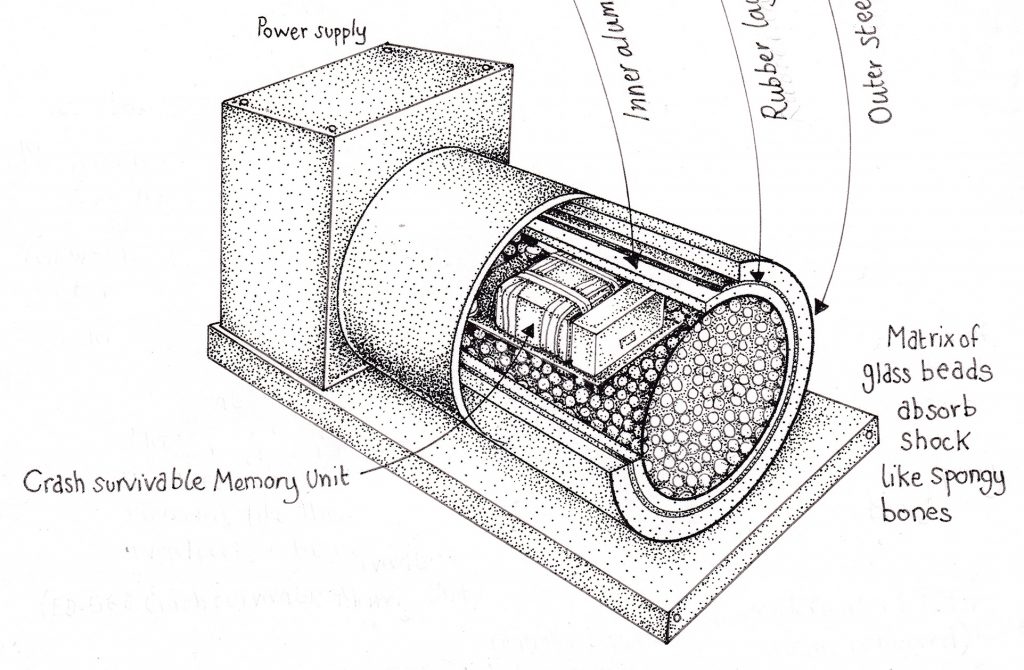 Illustration of a black box recorder (inspired by a woodpecker skull)

First up is the cat.  I can’t remember what the cat has inspired, but loved doing the illustration.  It was so simple!  No strange machines or cross sections.

As with all the illustrations, I started by doing a simple ink line over my pencil line drawing.  then, bit by bit, I build into the tonality using humdreds of tiny dots.

It does mean the cat looks rather peculiar along the way, reminiscent of the Cheshire cat from Alice in Wonderland. 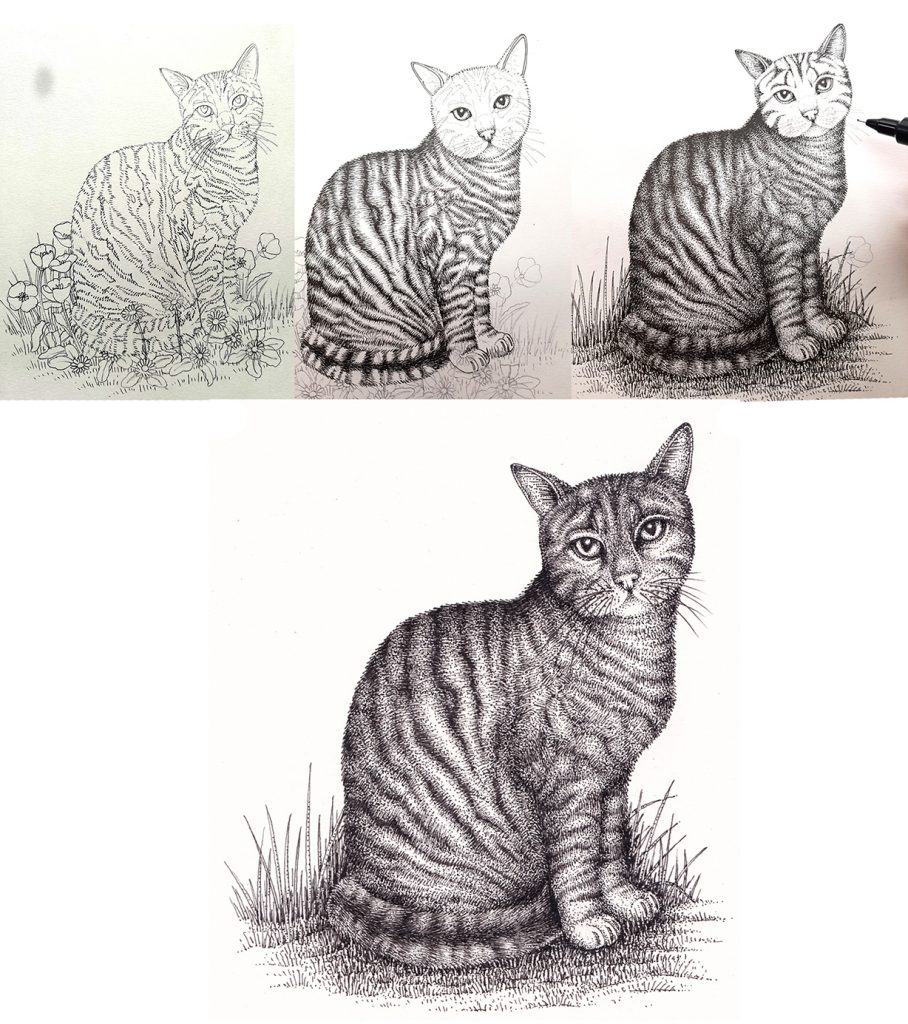 One of the toughest illustrations, just in terms of illustrating animals, was the Stenocara beetle.  These fabulous insects do “handstands” on top of sand dunes.  They collect dew on the bumps of their backs, and this rolls into their mouths, sustaining them through the violent heat of the desert day.

The challenge was to make sure each bump was clear and defined, but also to ensure the beetle registered as black.  There was quite a lot of experimenting to see the best way to show an individual bump.  It needed to be lumps, but also shiny.  Bumps also had to emerge from a black, textured background.  it was tough, but working into the background elytra before tackling the bumps was the key. 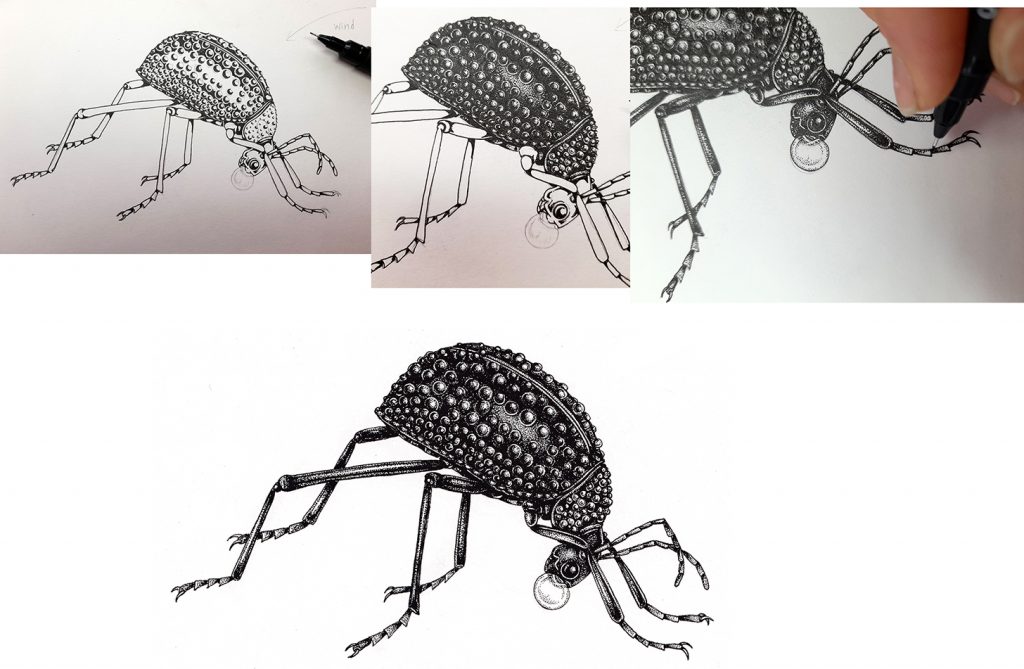 Everyone loves a Pangolin, and I’d done ink illustrations of this endearing animal before, for David Attenborough’s “A Life on Our Planet”.  This meant I had tons of reference available, which helped speed up the drawing.

It also gave me the opportunity to add a background, which wasn’t possible with lots of the drawings. 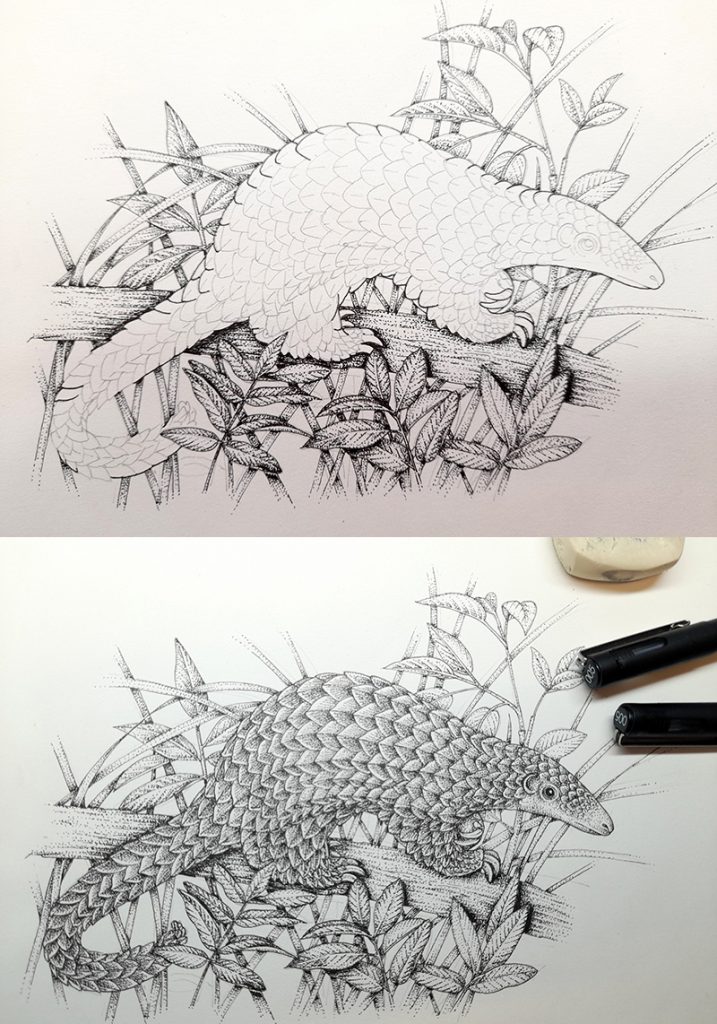 I did the foliage and tree first, then focussed on the pangolin.  Sorting out a consistent approach to showing the way the light falls on pangolin scales was key, and once that was established it was easy enough to ink the animal up.

The inspiration drawn from this animal is the roof at Waterloo rail station in London.  Getting reference of a pangolin posing in a position similar to the shape of the roof took some doing, but I think the parallel works.

The Peacock mantis shrimp Odontodactylus scyllarus is an extraordinary animal.  It’s beautiful, with vivid eye spots on it’s body and tail.  It also has terrifyingly fast punching “arms”, which are so tough that they’ve intregued and inspired engineers for ages.  Their toughness relates to the spiral stricture of the layers they’re made from.

Again, the lines are plotted in.  Then the edges are softened with dots.  Patterns are added (again with stippling).  Finally, shadows can be placed onto the animal. 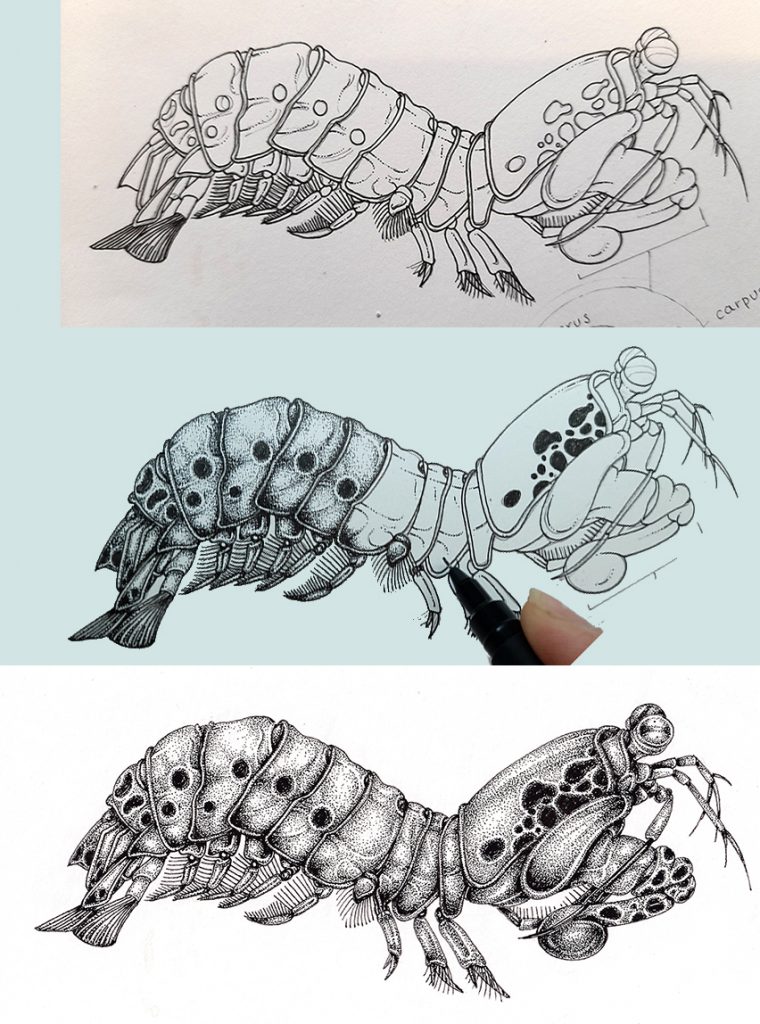 The Bactrian camel and dromedary were a troublesome pair.  One had to be kneeling in front of the other.  This meant sourcing good species-specific reference for both beasts.  For more on working from photo reference, check out my blog.  And I needed to tweak and alter and adjust them so that they looked natural. 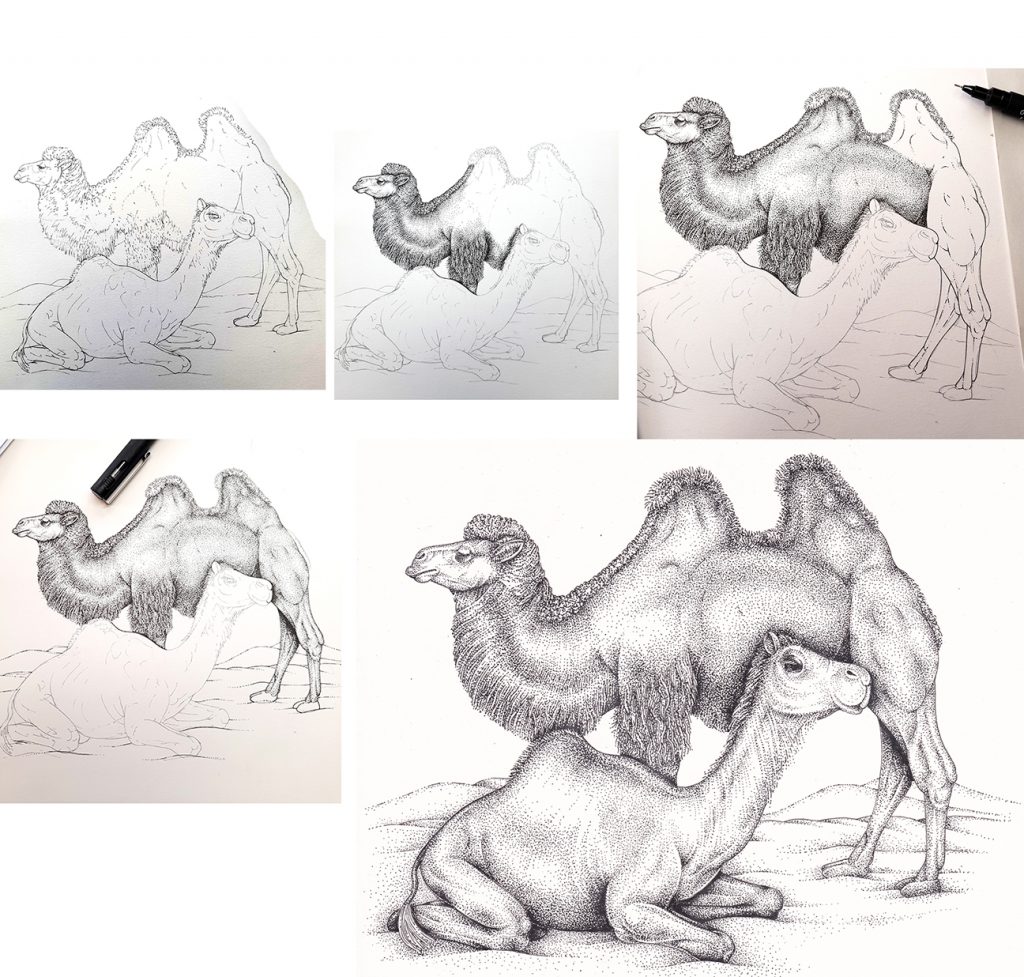 Another challenge was to ensure their textures were different.  Bactrian camels are hairier and woollier than the Dromedary.  And as for figuring out the anatomy of a camel knee when bent…oh my!

With these camels, I completed the Bactrian before moving onto the dromedary.  I didn’t want to work on them both at once; this helped me differenciate between their textures.

I half wondered about doing a whole blog on the steps involved in inking up this cow.  There was so much internal texture that needed to be considered.  Making sure the ribs were apparent, but not too prominent.  Giving enough internal detail so the eye doesn’t think, “wow, she just left this space white!”

So I drew a lot of the musculature in in pencil.  Then I ensured there were areas of solid black shading along the perimeters of the cow.  Once that was completed, stippling was used to ease between areas of dark and light,  No transition was allowed to be too stark.  Dots were used to suggest wrinkles on the cow neck.

The close up shows how the approach to stippling works.  The white areas had a few more dots before being finished, but just the proximity of the spots to one another gives so much information about shape and tonality.

Rather wonderfully, the invention inspired by the cow is a passive sewage farm.  Based on the function of the cow’s four-stomachs, it allows the sewage to pass through a whole series of settling beds and filters before emerging as fully filtered and potable water.  It’s a cheap system, has no working parts, and can be built below ground.  This makes it ideal for some developing nations where land is at a premium in highly populated areas, and the cost of energy makes many traditional sewage plants impossible,

I loved working on the lobster.  All those dots and mottling!  And those magnificent large claws!  Lines were plotted, the dark patterns dropped in, and then stippling eased out the stark contrast.  Lots of fringing hairs were added to the abdomen, and they’re always easy and fun to do. 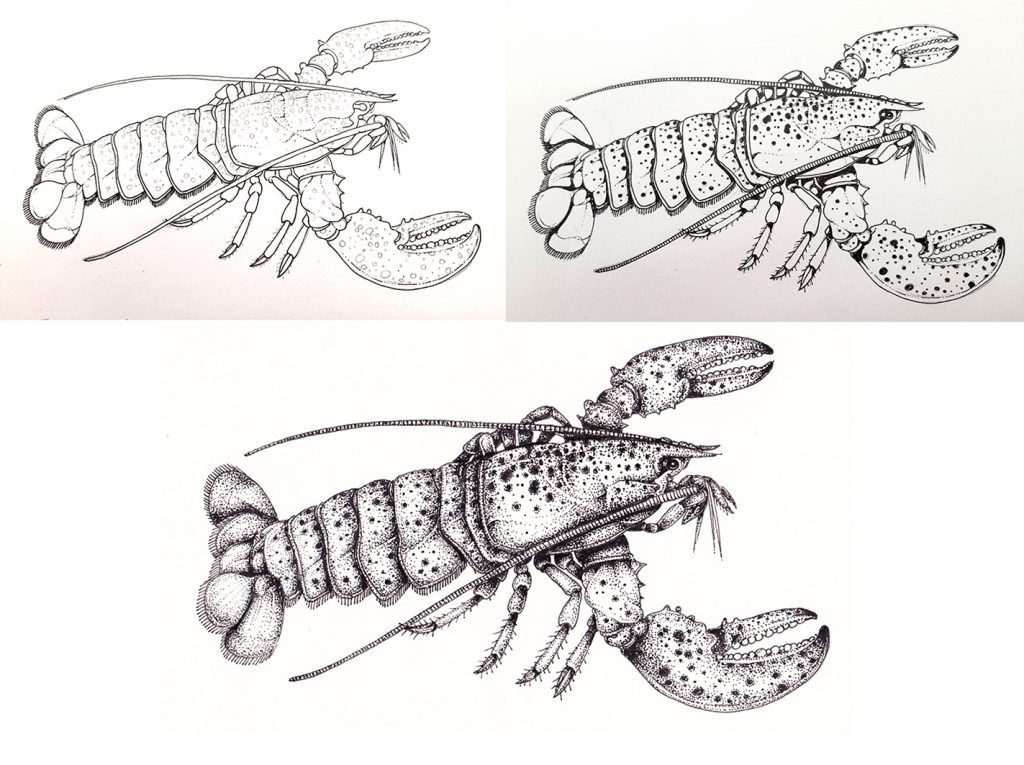 However, the technical illustration of a telescope that accompanied this image was a total nightmare!  Curved lines and regularly placed facets of glass.  Heaven help us.  I relied on some computer programmes to help me out, and got away with it, just about.  Even though I fully understood the concept – facets of the lobster eye inspired numerous many angled telescope lenses – illustrating it was hideous! 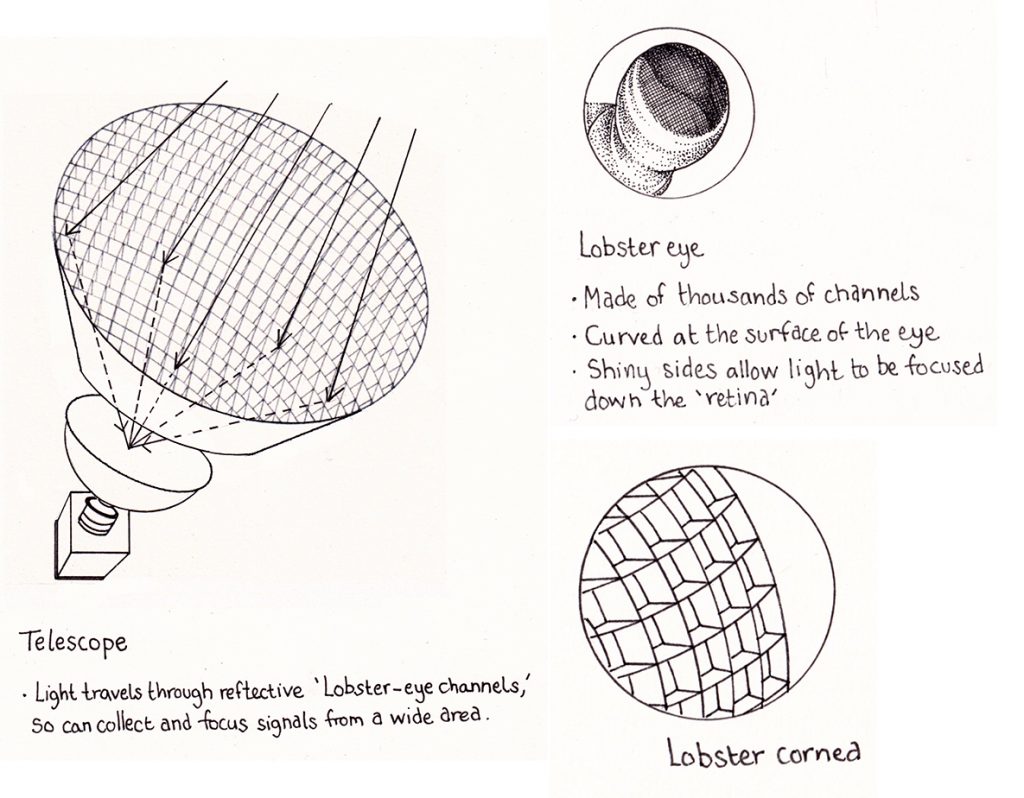 Telescope inspired by the eye of a lobster

The most fun illustrations were those that needed to have colour added.  This happened quite late on, when the cover of the book was being designed.  The art editor realised it’d be nice to have colourful animals on the cover to catch the eye.  One of the most striking of these is the Blue Morpho butterfly.

The pen and ink illustration had been relatively straight forward.  Even the butterfly scales close up was hitch free (the benefits of having someone who uses a scanning electron microscope as a friend…)

The challenge was very different from other ones for this book.  It was making the blue bright enough.

I did this by making sure there was plenty of white left on the page, to glow through as highlights.  This also means you have to make the edges of the blue very dark and deep, to provide the right contrast.  I managed, by using five layers of intense blue watercolour laid across the wing and focussed on the area where the body joins the wings.

It was rather stressful (not least because I was caring for my elderly mother at the same time; who needed cups of coffee, hankies, and help in knowing what was a tv programme and what was an advert…)  But once the blue was right, plotting in the leaf was a doddle. 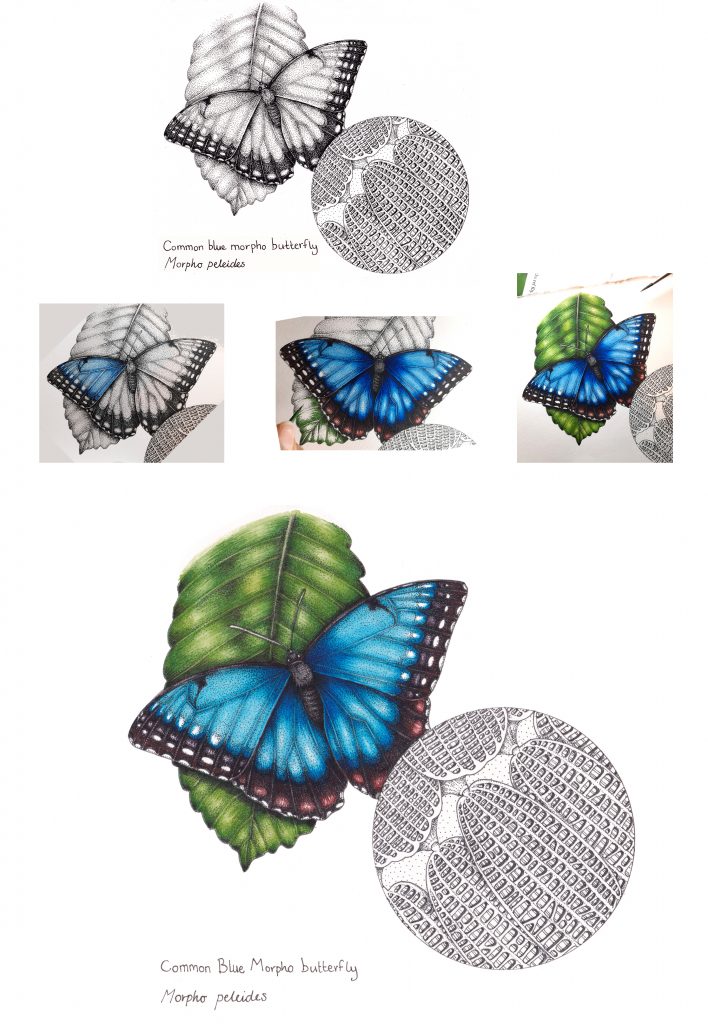 There are about 40 illustrations in total.  I’d urge you to buy the book.  Not because of my illustrations, but because there are so many wonderful “oh wow!” moments.  Examples of ingenious thought and fabulous invention.  It made me feel inspired by the innovation of humanity, and the glory and peculiarity of nature, in equal measure.

If any of these illustrations appeal, feel free to email me on info@lizzieharper.co.uk, or browse for them using the search function on the website.  The originals are all available to buy, just drop me and email.

Other illustrations from the book

And to finish, I just thought I’d share a few of my other favourites from the book. 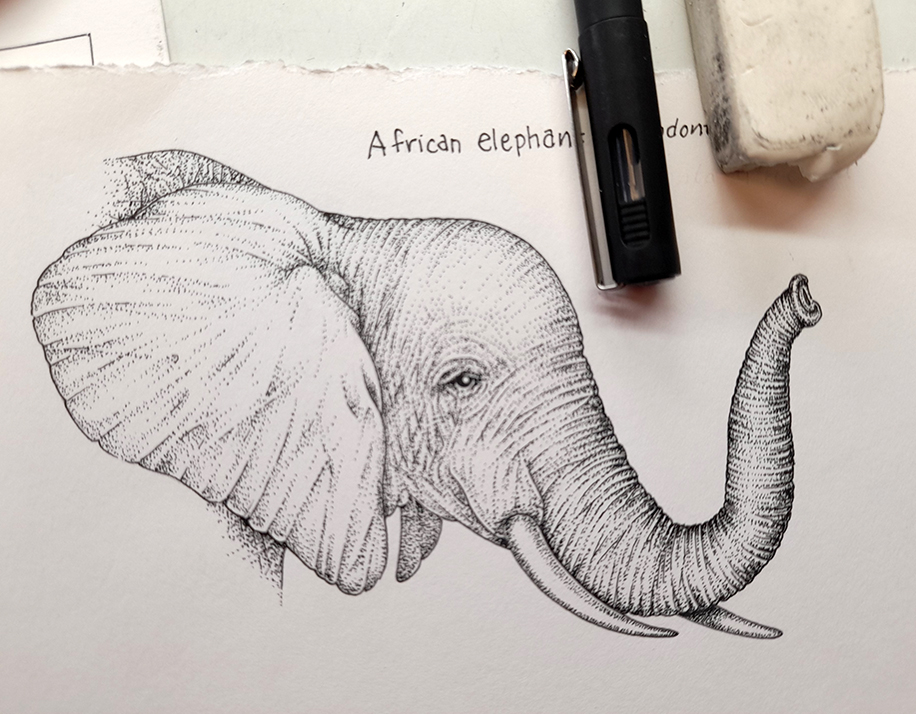 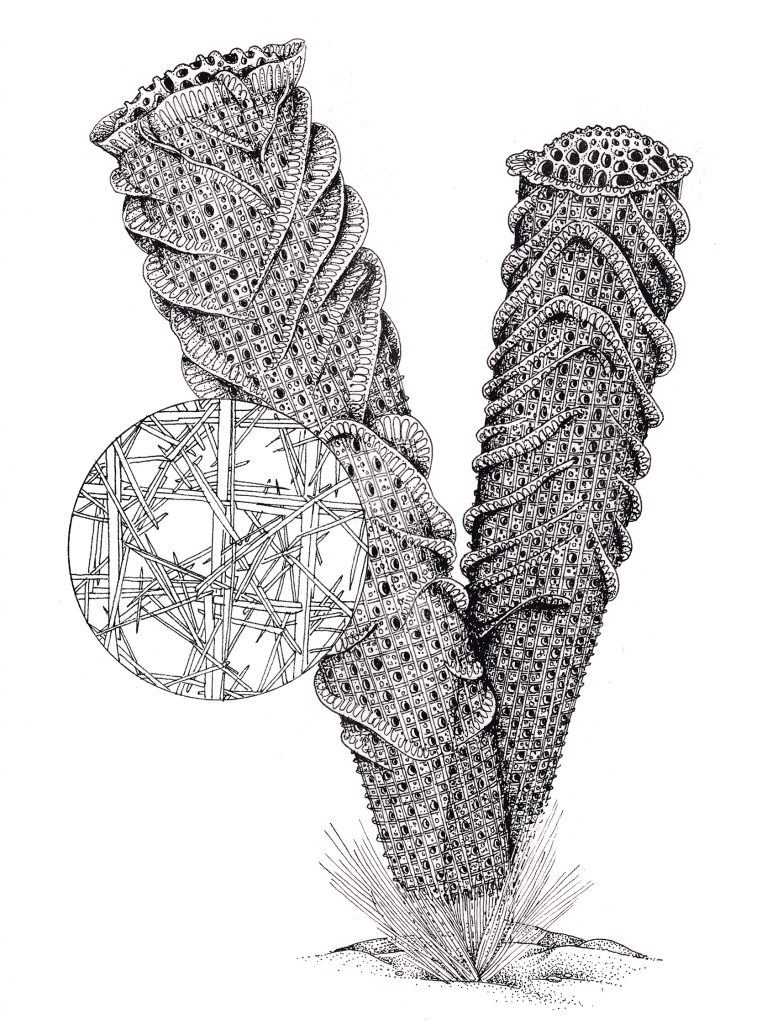 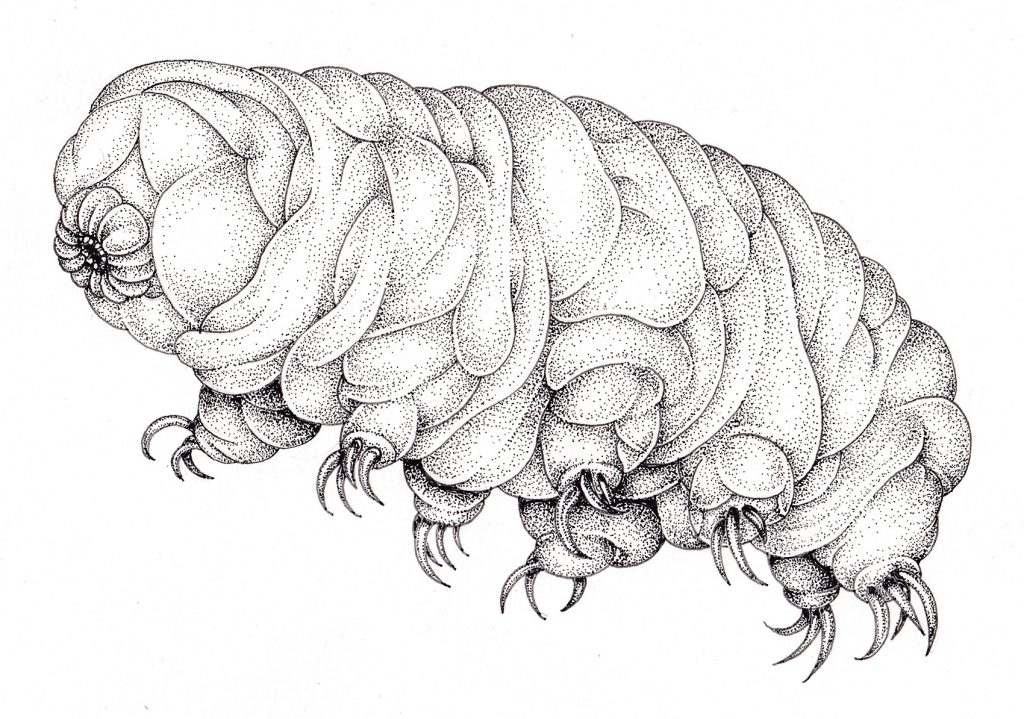 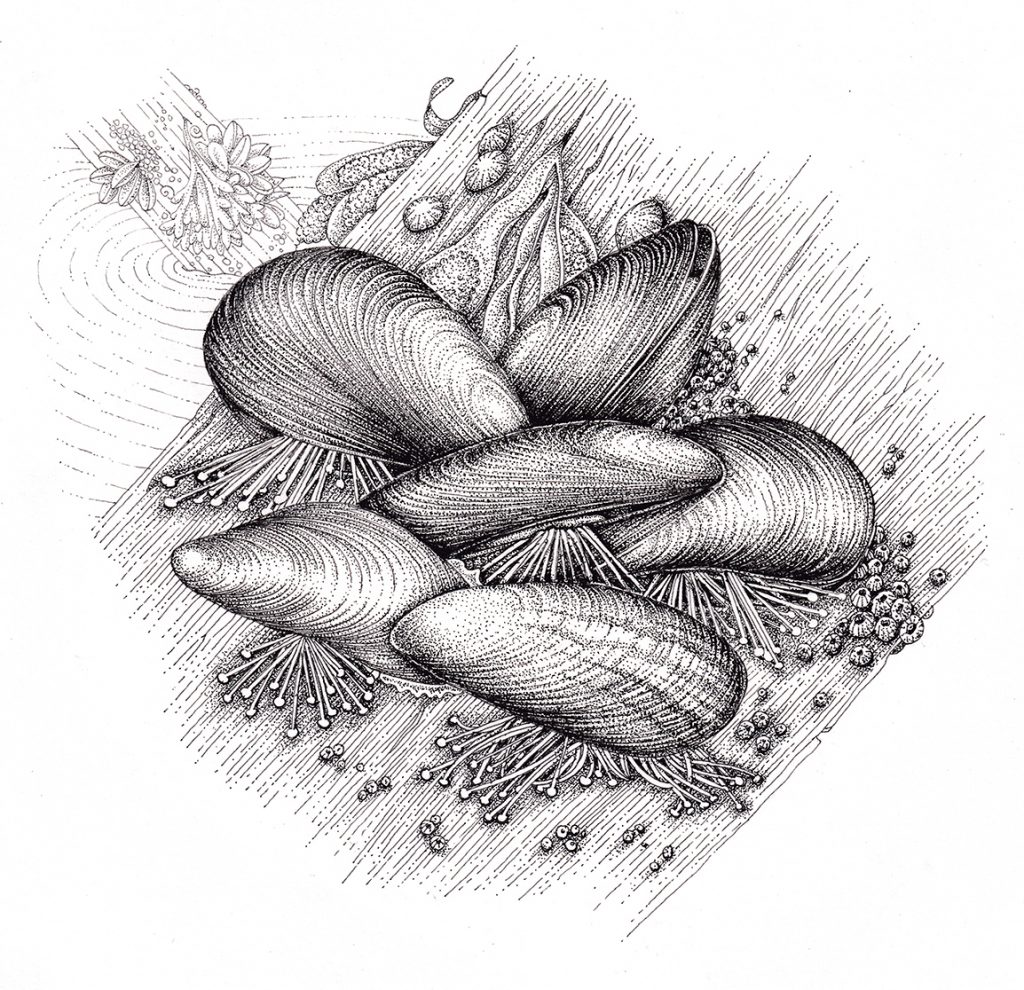 Mussels on a rock

Just to say the mussels are particularly amazing.  Their threads are incredibly adhesive, even under salt water.  Scientists have used these as inspiration to produce a glue that can be used to mend tears in the human placenta after inter-uterine surgery.  The placenta doesn’t fix itself like much of our bodies, so closing up a surgical incision after surgery was almost impossible.  Thanks to the mussels and some very clever scientists and engineers, it’s now feasible to perform these vital interventions,  You’ve got to love biomimicry!