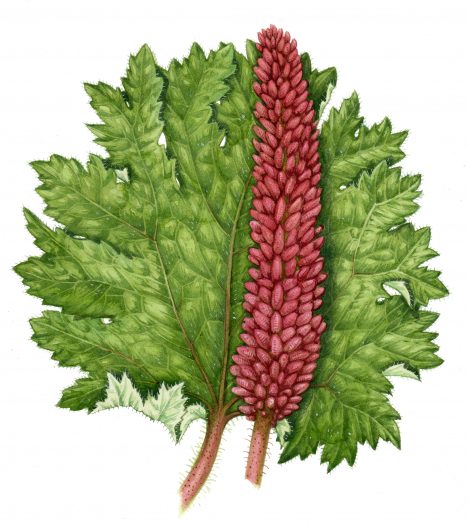 Gunnera is an extraordinary looking plant.  With its gigantic leaves, and ability to form enormous clumps that dwarf us, it’s easy to identify.  But can you tell your Gunnera manicata from your Gunnera tinctoria?  If not, here’s a quick guide.  I learned this recently, whilst working on new illustrations for the Field Studies Council who’ll be bringing out a fold-out chart on Invasive Species in the UK soon.

There are lots of different names for Gunnera, from Dinosaur food to Chilean Rhubarb.  I’ll use the following.  G. manicata will be referred to as Brazilian Giant Rhubarb, G. tinctoria as Giant Rhubarb.

These plants originate in South America and favour moist woodland habitats.  You can often find them growing along river banks throughout the UK and Ireland.  The threat they pose is due to their enormous size, they literally tower over all the other species, blocking sunlight and out-competing the native flora. 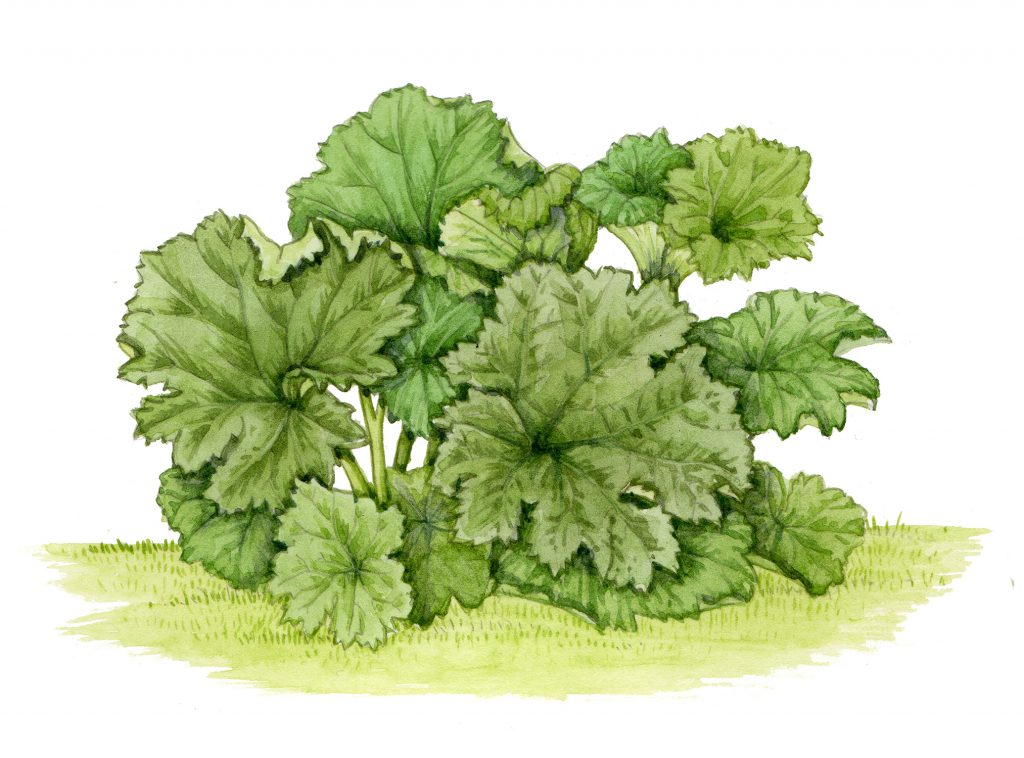 This plant has enormous leaves, as do most gunnera species.  However, its leaves have a slightly less ragged edge than G. tinctoria.  They also have distinct lobes.  Leaves of this species are larger than those of G. tinctoria.

The leaf stalks sport rather smart red spines, although the stalk itself is pale green. 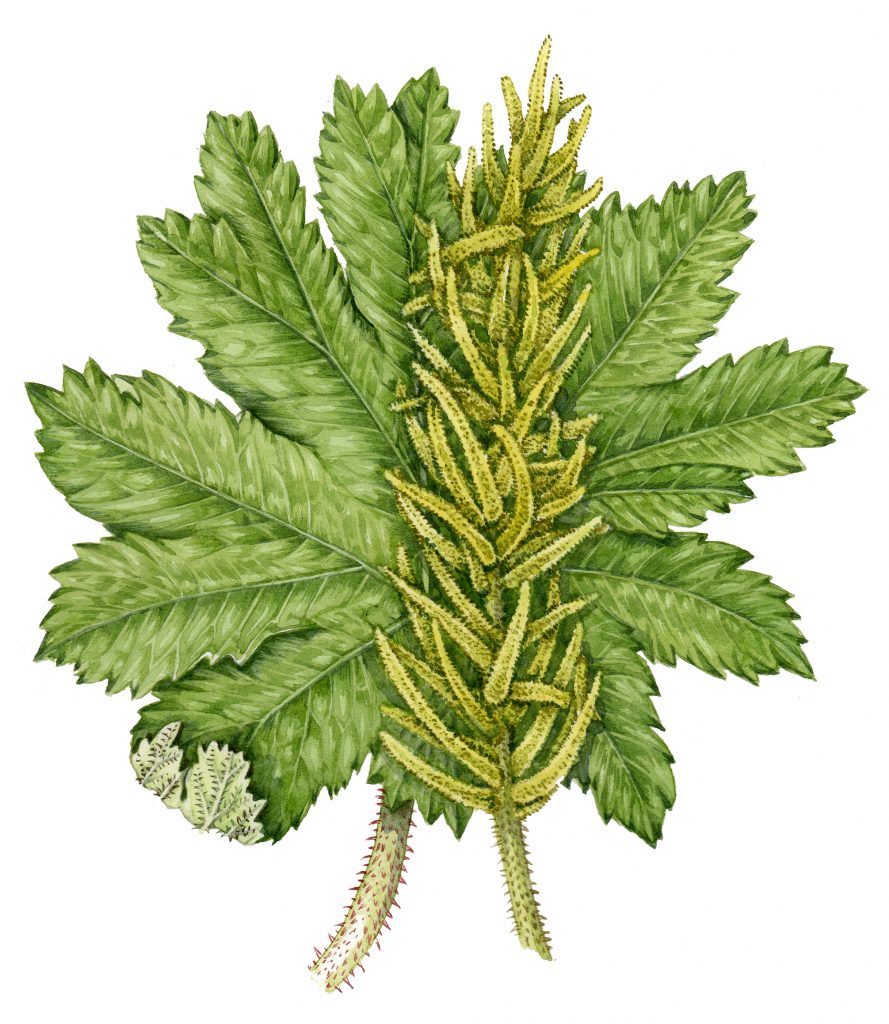 If you look underneath the enormous leaves, you’ll see spikes along the larger veins.

The flowering spike is less compact than G. tinctoria, and more sprawling.  It grows close to the ground and is at least three times longer than it is wide.  Each branch looks like a long wavy tail.  The big difference here is that the flowering spikes of Brazilian Giant rhubarb are green-yellow; in G. tinctoria they’re red.

Again, the stalk is pale green rather than flushed red.

Giant rhubarb grows from furry brown rhizomes.  It has massive leaves, these have very irregular and jagged margins.  Although the leaf is lobed, these are less distinct than on the Brazilian Giant Rhubarb.  The top and underside of the leaf have stiff bristles.  Leaves are a little darker green than in G. manicata.

Leaf stalks are red or purplish (except on very young plants) and are covered in thin green bristles. 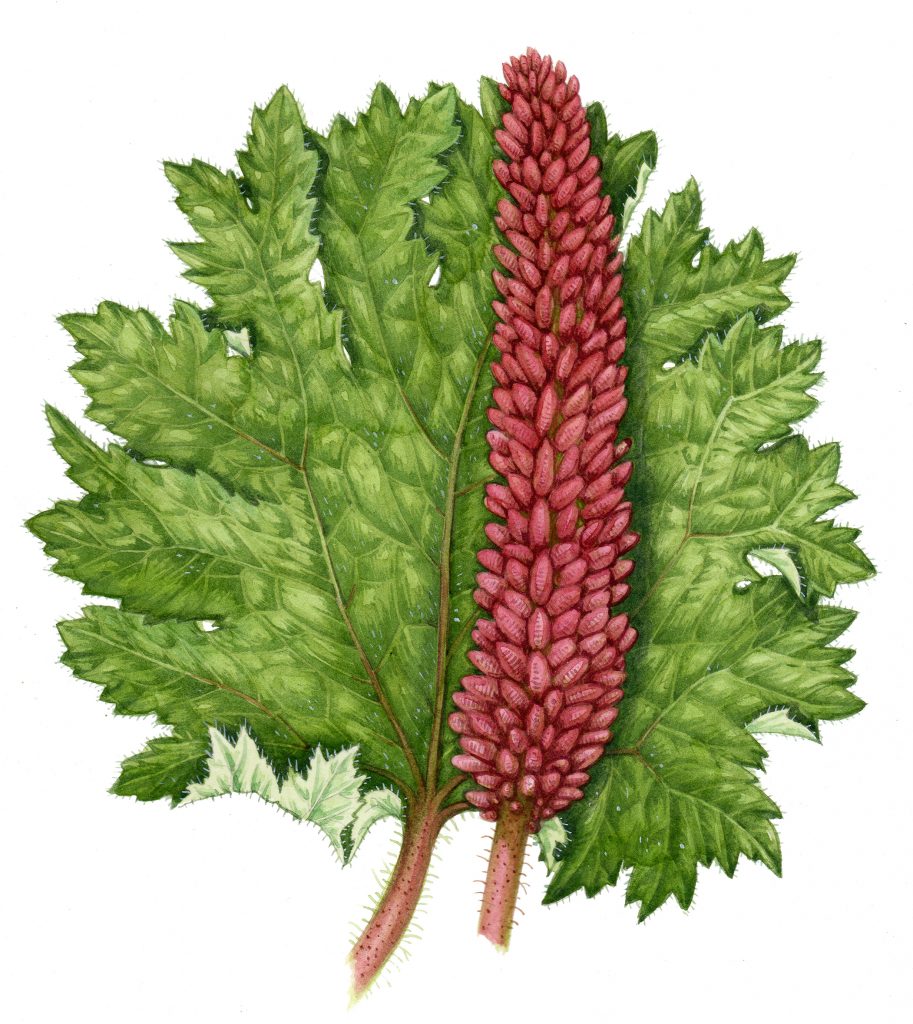 Look at the under side of the leaf and you’ll see those stiff bristles.  You won’t, however, see any spines on the veins.

The flowering spike is erect, compact, and a rather lovely crimson.  The inflorescence is like a cone or cylinder.  It’s three or four times longer than it is wide.  There can be up to four spikes per plant.  The flowers are borne close to the central stem and are green flushed crimson; they are stalk-less.

The flowering stalk is flushed crimson.

Clearly, the easiest way to tell these two enormous plant species apart is by looking at their flowers.  However, they can be readily distinguished from the leaves alone, especially if you flip a leaf upside down.

For a really good article on comparing these amazing invasive plant species, please look at La Palmeraie.  It was really useful when researching my illustrations.

For more on invasive plants, keep watching this blog, and check out my earlier blog on illustrating Giant Hogweed, Himalayan balsam, and Japanese knotweed..