The tale of a Barnacle drawing 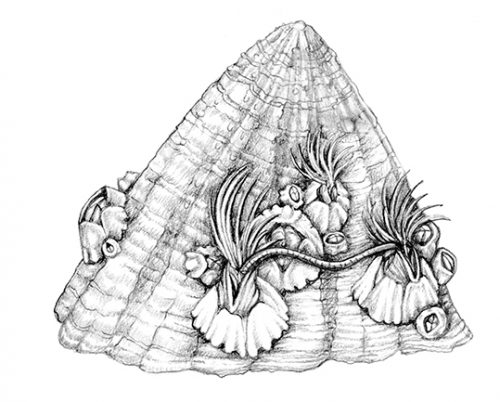 This is the tale of a pencil illustration of a group of barnacles.  Recently, I completed a series of natural history illustrations to accompany a rather wonderful book by John Wright (The Naming of the Shrew).  There were 12 illustrations to do (see my blog on Scientific illustration in pencil for details)

I don’t often get asked to illustrate molluscs, so the barnacle was a welcome commission.  Here is a watercolour of a cockle shell. 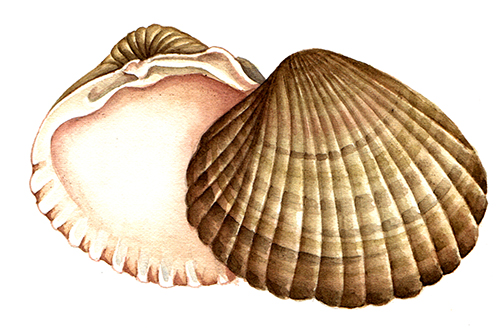 Choosing which barnacle species to illustrate

We had a lot of debate about which of Darwin’s barnacle species to draw; John’s initial suggestion turned out to be a very odd creature which (unusually for a barnacle) didn’t settle into a shell at maturity.  There was no visual ref for this.  We finally decided to go for Amphibalanus improvisus; this is a comparatively common British species.

I double-checked the diagnostics for the species (irregular fixing of shell to substrate, 6 plates at the top) and was pleased to see I had a limpet shell with some dead barncales of this species attached.

Next came some rather ribald emails about wether or not to have some members of the barnacle group mating.

The reason for this is that one of the amazing things about barnacles is that the phallus of the male is about 9 times the length of its’ body.  Obviously, for an immobile, sessile creature such as the barnacle, this makes perfect sense.  You need to mate, but you can’t move.  What’s a barnacale to do?  We decided to include a couple of barnacles “in flagrento”.

John also suggested the barnacles be on a common limpet shell, a species these barnacles often settle on.  Hooray!  My dead ones WERE on a limpet!  I drew up the illustration. 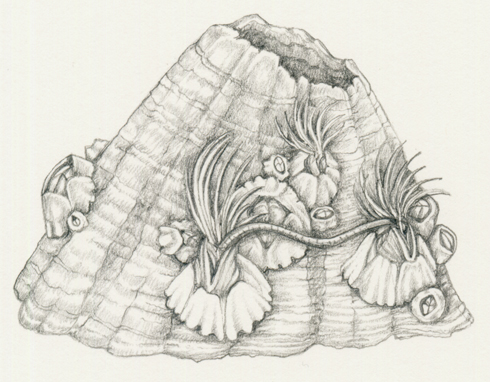 John was instantly back on the email.  I thought  there was an issue with the male’s appendage; but no.  He pointed out that a limpet shell with a hole in the top (as my shell had) would be a dead limpet.  A dead limpet could no longer cling to a rock.  A limpet that wasn’t attached was unlikely to sustain a colony of living barnacles (which is why I found the shell washed up on the beach).  I could see his point.  Luckily, it was a matter of minutes to pop the lid onto the formerly broken limpet. 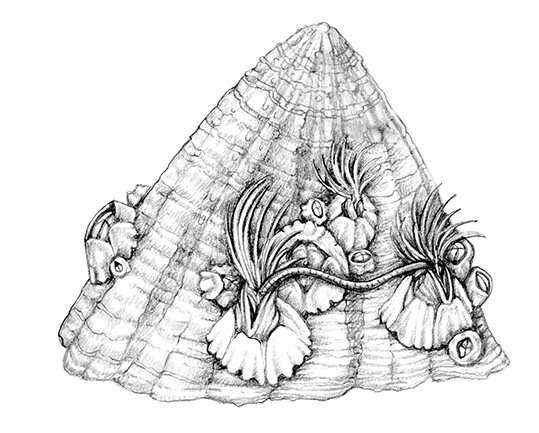 Now it’s just a matter of seeing the illustration reproduced in the pages of The Naming of the Shrew, where it seems so polite and prim…. and to be able to tell the tale of one of the 12 illustrations that’ll nestle within the pages of this fabulous book.