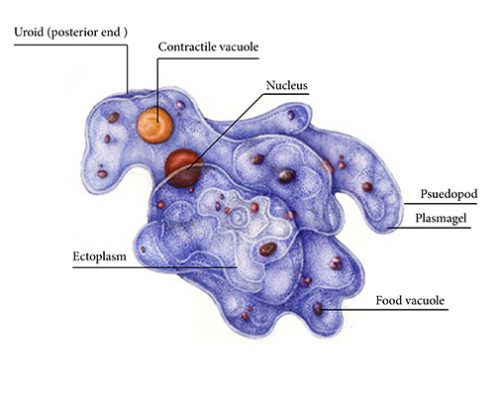 Scientific illustration involves drawing all sorts of natural history specimens; botanical, animal, and even microscopic.  In this series of three blogs I’ll give a brief introduction to three common (and very cool) micro-organisms.  The first is the Amoeba.

Amoeba are free-living aquatic creatures, and can be seen in any drop of standing fresh water, if you put it under a compound microscope.  They also occur in salt-water, and as parasites within other animals (such as humans).  The largest is a little under 1mm in size. They change shape by oozing outwards into pseudopods, and use these to engulf food.  So these pseudopods surround foodwith a water droplet, then take it into their bodies to digest. These packets of food are called food vacuoles. The engulfing process is known as phagocytosis. For a video showing this process please click on the link: Ameoba eats two paramecium. 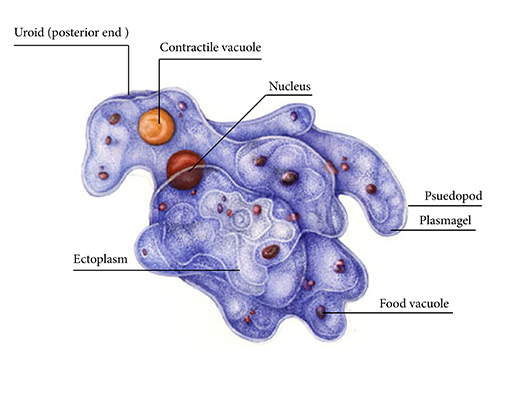 Anatomy of the Amoeba

Amoeba aren’t blue.  (Interestingly, another micro-organism called Stentor certainly IS blue).  I used the colour to show the amoeba’s features.

Although they always change shape, amoeba seem to have a  definite end, which is known as its uroid.

Their contractile vacuole is used to regulate the amount of water in their body, and is near the uroid.

The nucleus is where information and genetic material is stored; it controls reproduction, eating, and growth.

Pseudopodium are organelles which “walk”.  They extend from the body, then cytoplasm flows into them, and the amoeba is propelled forward.

The amoeba body is full of cytoplasm.  This is clear plasmagel (seen toward the edges of the pseudopods, just below the cell membrane); or it is granulated endoplasm (further inside the body).

Amoeba breathe by diffusing oxygen through their cell membranes.  They reproduce asexually by dividing their cytoplasm and nucleus through mitotic division, in a process called binary fission.  This produces two identical daughters.

Although I love micro-organisms I am no expert, so get in touch if you spot errors, I’ll be more than happy to fix them.  Next week: the Paramecium! And for the third micro-organism, I’ll be looking at the euglena.