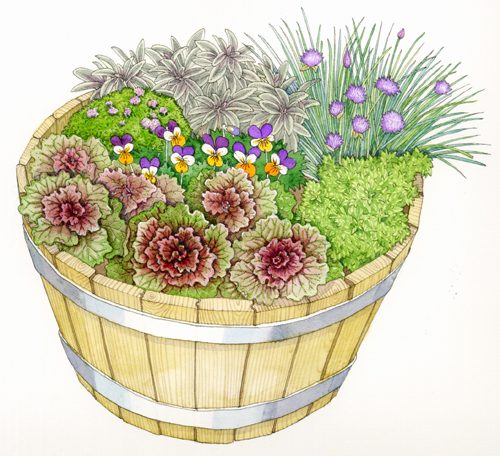 A job’s come in from Bedfordshire, Buckinghamshire & Oxon Wildlife trust.  It involves illustrating a map of their nature reserve at Hartslock.  The second part is illustrating a large landscape of the countryside, and the seven species of orchid found on site.  It’s pretty amazing; one of the species (the monkey orchid) is only found in two other places in the UK.  Another species (the monkey-lady hybrid orchid) is found nowhere else in the country!

Background work for the map

Preparing to do the map rough of the map involves examining maps of the area.  Next, I look at aerial photos.  Finally, I need to include information on species and paths given by the client. 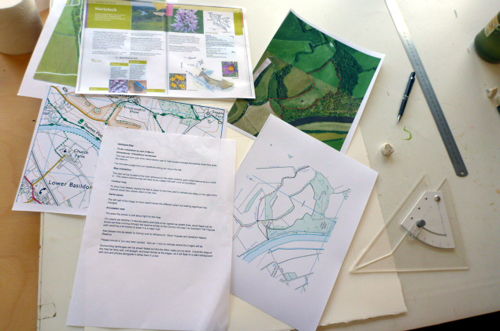 Work on the map rough

I draw up the boundaries of the area.   I make sure pathways and access roads are all in exactly the right place.  (My handy projector is useful for this). 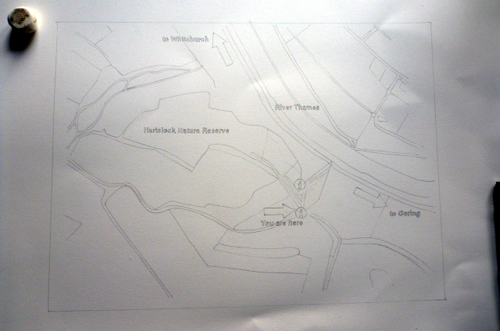 Next up is to fill in the trees and scrub.  Then I add the icons and the arrows, followed by the paths and the boundaries. 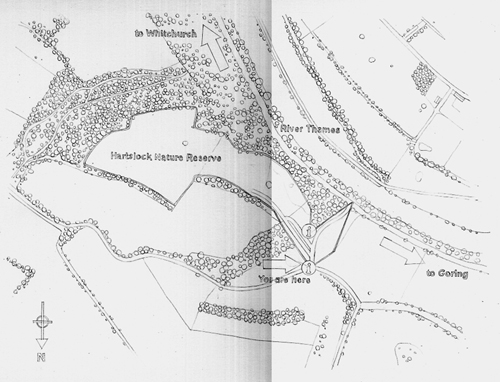 I submit the rough to the trust.   Various changes are inevitable, and welcomed.   It’s so much easier to fix things at this stage!  A bench and a gate are added.  Two illustrations of keynote species (pasque flower and an orchid) are drawn in.   Tweaks to areas of undergrowth, size of the arrows, and the paths are made.   I think that we’re pretty close to getting the go-ahead.  There have been three rounds of revisions.  This is normal, and fine.

Re-use of an existing illustration

During this, I get an email asking for re-use of my oil-seed rape illustration.  It’ll be used in BBC Countryfile magazine.  Obliging is very easy.  This re-use of illustrations from my image library is the way I add to my income as an illustrator.   Illustrating is work that I love, but it is notoriously badly paid. 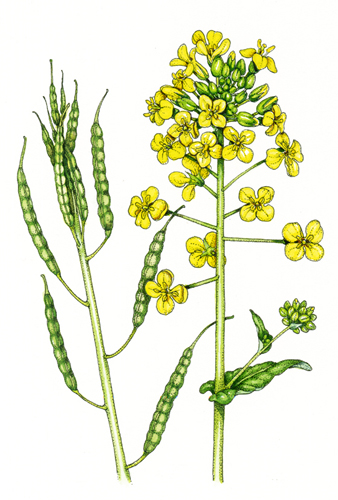 Work on the Hartslock Reserve landscape

The second illustration for the Hartslock Reserve is of the slope where all these wonderful orchids grow.  I’ve assembled my ref., and worked up a couple of thumbnail sketches.  The trust can discuss these.  I got the go-ahead on the 2nd option yesterday, with a few minor tweaks.

I’m excited.  These landscapes are tons of work, but lovely to work on.  The early stages are mostly about fitting everything into one composition that works.  I have to get movement going across the page.  Making the landscape not look clunky is important too.

For a detailed explanation of this whole process, check out my blog. 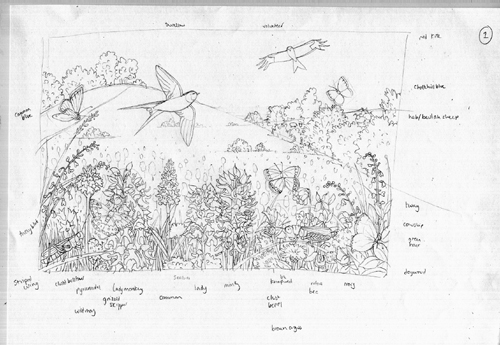 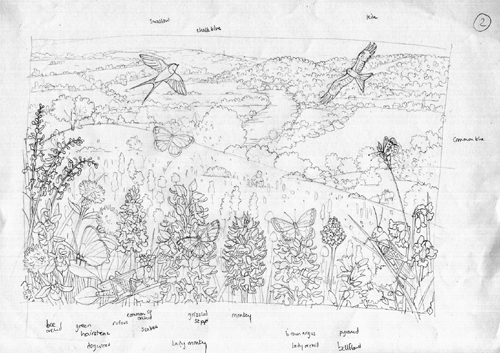 Another job this week has been for Rodale Publishing (who I’ve worked for often, and always happily).  It’s been a pretty tight deadline (most illustration jobs do tend to be), but they wanted three simplified garden plans for the forthcoming “The Organic Gardener Caleder”.  They provide scans of the author’s sketches (see below) which I then work up a rough from, once I’ve collated the ref. for all the different plant species needing illustrating. 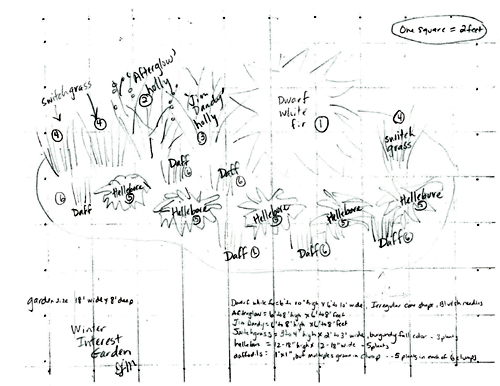 Here are the three roughs, along with their revised versions. 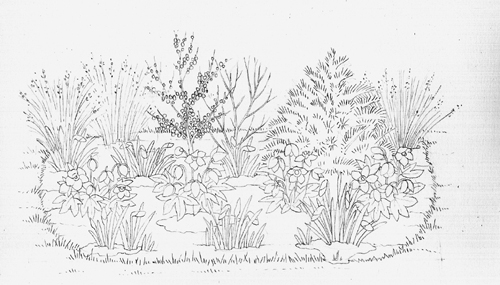 Summer salsa garden rough.  The spring onions get tidied up, the coriander bed is extended, and more yellow bell peppers have to show.  Revisions also call for a reduction in the number of tomatoes, and the addition of a support cage.  This requires a complete re-draw.

Rodale are great at getting quick feedback to me, so I get the go-ahead on these within 48 hrs of receiving the author’s sketches.  Then it’s just a matter of  “colouring in”.  This is fine, except for the red lettuces at the front of the herb planter.  I have to do several tests  as I have no idea how to show leaves which are purple and green simultaneously.  Amazingly, I think they work out well,  and are my favourite part of the three illustrations. 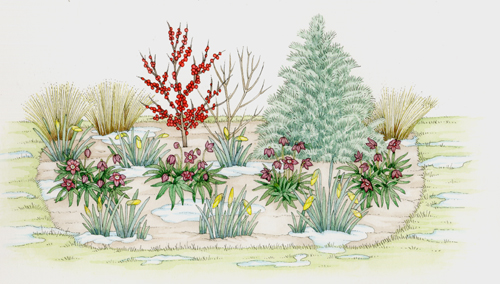 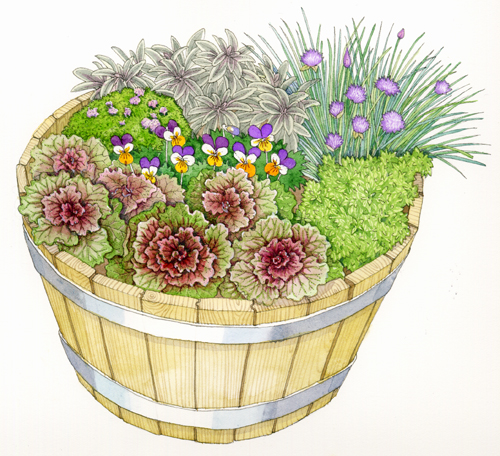 When an illustration becomes hard work

The third of these turns out to be a bit of a nightmare, as the author realises that the tomato types I’d drawn aren’t what she is after.   She wants a change to the leaves of the bell pepper.  Also, entirely my fault, it appears that jalepeno peppers are green not red!  So a re-draw happens at unearthly times of the night.

Rodale were great about it,  and compensate me for my time.  So here, in a salsa-based “spot the difference”, are the two finals of the salsa salad bed garden plan. 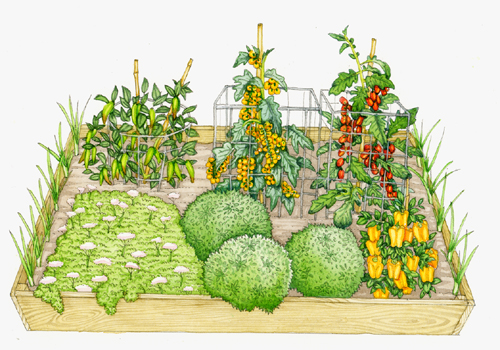 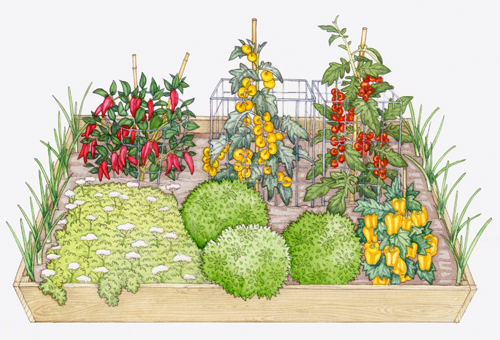 Work for a magazine

A magazine I’ve worked with before, Resurgence & Ecologist Magazine, just got in touch to ask to re-use my wild garlic illustration.  Another image library re-use; they had the illustration within 10 minutes of contacting me.  Image libraries are beautiful things for clients, too! 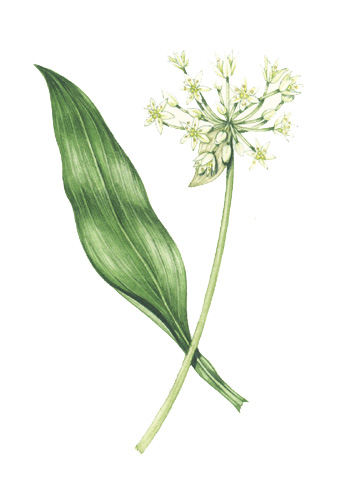 So it’s been a busy week of work; which keeps me happy as I look out of the studio window into the garden which, for the first time in ages, is golden with sunshine.