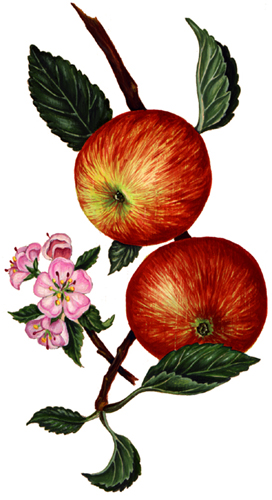 Botanical and scientific illustration requires biological knowledge, and this is certainly true when it comes to painting botanical diagrams.  I recently did some illustrations for Rodale’s 21st Century Herbal by Michael Balick.  One of these was a diagram of fruit types. 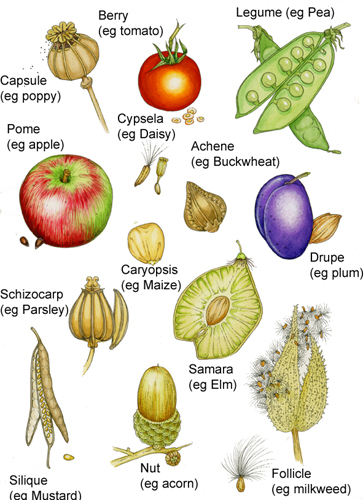 Sources of information on Fruit type

This got me thinking about how little I knew about  fruit types.  I thought if I blogged on the subject I’d learn a bit more.

I’m using the glossary from Flora of the British Isles by Clapham, Tutin, and Moore for my definitions (which I’ll quote, or paraphrase); it’s an eminently accessible and well-loved tome.  I used it throughout my work on the plates of the Collins Flower Guide by David Streeter.  It’s reccommended by both the Botanical Society of the British Isles (BSBI) and numerous botany departments of British colleges.

Before we start on the fruit types, we need to define a couple of terms.  A CARPEL is an organ at the centre of a flower, which carries one or more OVULES (“an ovule is a structure containing the egg, and which develops into a seed after fertilization”), and whose margins fuse with other adjoining carpels to make a safe space where the ovules and ovary (and subsequently the seeds) are enclosed.  A GYNOECIUM is the female part of a flower (so the ovaries and, once fertilized, the seeds) along with the style and pistil.  A LOCULE is a segment, or chamber within the fruit.

First up, the CAPSULE: “A dry dehiscent fruit composed of more than one carpel”.  If a fruit is dehiscent, it means it breaks open at maturity, in this case to spread the seeds.  The number of locules borne by a capsule varies from species to species, and mono/ bi/ tri-locular are just terms used to refer to these differences.  Examples of capsule-bearing plants are many lilies, the brazil nut, the horse chestnut, and the poppy family.

BERRY is a commonly used term, and (amazingly and luckily) mostly used in a botanically correct way. It’s a “fleshy fruit, usually several-seeded, without a stony layer surrounding the seeds.”  They’re produced from a single ovary. Lots of the fruit we eat are berries.  Blue-berries, gooseberries, grapes, tomato, elderberry come to mind.  Edible fruits we wouldn’t think of as berries are, (botanically), also berries.  These include pumpkin, watermelon, avocado, and coffee.

LEGUMES are dry fruit that develop from a lone or simple carpel.  They dehisce (break open) along two seams (one on each side) when ripe.  They are referred to as “pods”.  Think of the bean and the pea.  Any member of the Leguminosae (now called Fabaceae) have legumes.  Alfalfa, clover, letils, beans, lupins, peas, and vetch are examples.  Black locust (below) is one of the only legume-bearing trees.

POME are fruit “in which the seed is surrounded by a tough but not woody or stony layer, derived from the inner part of the fruit wall, and the whole fused with the deeply cup-shaped receptacle.” So pomes have seeds deep within thick layers (which, in the case of apples and pears, we eat).  You can see that it fuses with the receptacle because when you eat an apple, the stalk goes direct into the fruit. The “core” of an apple are the carpels, all fused together. Examples of pomes are apples, quince, pears, hornbeam, and hawthorn.

CYPSELA.  Ah, now here we get into some trouble.   Several fruit types explained here are actually different sorts of ACHENE.  An achene is a “small, dry indehiscent single-seeded fruit”.  In fact there’s such diversity in this definition that I’m going to do a whole blog on achenes.  For now though, a cypsela is an achene which develops from a compound inferior ovary.  They’re fruit of the Asteraceae family, so plants like dandelion and sunflowers.  If you think of a dandelion seed, the “wing” or parachute of it is actually an extension of the calyx (all the sepals), the seed and surround is the cypsela.

ACHENE.  “a small, dry indehiscent single-seeded fruit”.  As I say, there’s tons of diversity wtihin this definition, mainly based on the position of the seed in the achene or the structures surrounding it.  Suffice to say that plants as diverse as the dandelion, elm, strawberry, rose, sycamore, and buttercup bear achenes.  As I mentioned earlier, next week’s blog’ll be all about achenes, so keep an eye out for it.

Next up is the DRUPE, a “fleshy fruit with one or more seeds, each surrounded by a stony layer”.  Pretty straight-forward.  Drupes include damsons, plums, sloe, and ivy.

I’m afraid the CARYOPSIS is another form of achene.  It’s an achene where the ovary wall and seed-coat are united.  In effect, this means it’s a seed that’s only got one (fused) layer covering it.  This is the way that all the grasses and cereal crops bear their fruit, and the simplest way to think of it is as a lone grain of sweetcorn (maize); in fact “grain” is aonther word for a caryopsis.

A SCHIZOCARP is an ovary formed of lots of fused carpels (SYNCARPOUS) that splits into separate segments when ripe; each segment has one seed.  It can also be defined as any fruit which splits into different portions when mature.  Examples of schizocarpous plants include carrots, mallow, and parsley.

I rather like the SAMARA, winged achenes; or “dry indehiscent fruit part of the wall of which forms a flattened wing”.  Trees often bear samara, and the wing is brilliant at using the wind to disperse.  Just watch a maple samara twist to the ground, or some ash keys helicoptering down.  Very clever.  Elms, the hop tree, ash, and maples all produce samaras.

SILIQUES are specialised capsules which dehisce from below, with the ovary walls (the VALVE) lifting away to reveal the seeds supported by an internal scaffold (the REPLUM).  They’re formed of two fused carpels, and their length has to be more than 3x their width.  Examples include radish, bittercress, and oil-seed rape.

Wa all know what a NUT is, and eat lots of different types.  They tends to be single seeds encased in a hard outer ovary wall which doesn’t dehisce or easily part from the wall (or “shell”) at maturity.  The ovary wall tends to be woody, and true nuts develop from compound ovaries.  Species bearing nuts include hazel, chestnut, beech, and oak.

Finally, the FOLLICLE is a “dry dehiscent fruit formed of one carpel, dehiscing along one side”.  It has two or more seeds which get dispersed when the follicle splits along one seam at maturity.  Examples include the peopny, milkweed, hellbore, larkspur, and aquilegia.

And that’s it!  Most of the different terms for a fruit defined.  I feel it’s one of these areas where if I use the terminology more then I’ll get used to it, and no longer feel over-whelmed by so many terms and definitions.  And certainly, for me, matching a plant to its’ fruit type has been highly instuctive.  I just hope I’ve not bored you to tears as I did it!