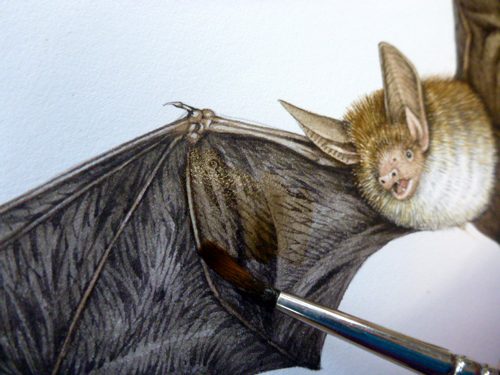 One of the more difficult animals I’m asked to do natural history illustrations of is bats.  This is because getting reference of them in flight can be tricky. It involves being nice to lots of extremely talented photographers.  Also, getting the different details on their body is vital.

Here’s the approved rough of the Bechstein’s bat which was commissioned by BBOWT.

Generally, ear shape and the shape of the tragus (the structure within the ear) is key. It’s made of cartiledge and seems to be involved in echo-location.  For more on this, look at this link from the Natural History Museum on The Secret Life of Bats.  Fur length and colour also matters, as does the shape of the face.  Although this is true, it’s actually the painting of the wings which is hardest of all, so when you’re lucky enough to own your very own bat specimens, life is much easier.

A friend told me about her loft one hot summer which was full of dying Daubenton’s bats.  Once she’d informed the RSPCA and the local organisations involved in bat conservation, I was allowed to collect and keep three of the dead animals.  Because they’re so little, they readily dessicate, so preserving them wasn’t difficult. 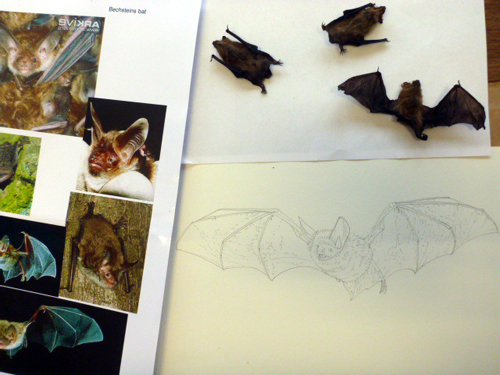 One died with wings outstretched, so I could really examine the way the thin membranous skin folded and pleated, and use this in my painting. 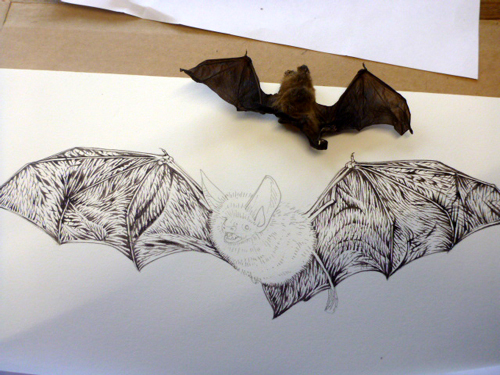 The paints are, as always, Winsor & Newton watercolours, and I’m working on Fabriano artistico hotpress paper with a series 7 brush (also by Winser & Newton). This brown is purple mixed heavily with vandyke brown and applied quite dry.  Once I’d plotted in these folds I panicked, and thought the whole thing looked awful.  Time to keep going. 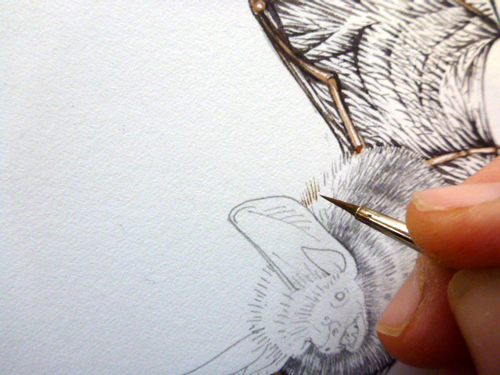 Moving swiftly onto the body, I mixed a purplish grey for the stomach and chest and a “rusty orange” for the back.  The Bechstein’s bat has much longer hair than my Daubenton’s, and of a totally different colour, so they were no use for this part of the painting. 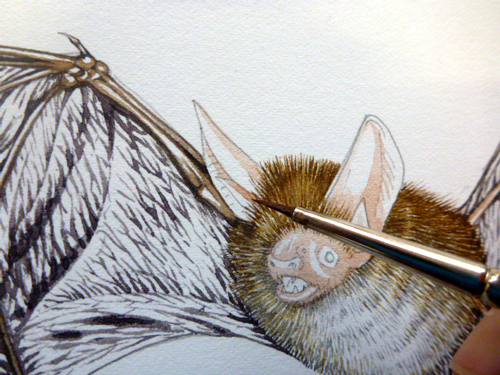 Here I’ve worked into the fur, and have begun the face and ears.  This consisted of a pink undercoat (cadmium yellow with a little crimson lake, very dilute) and leaving lots of areas pale.  The transition between flesh and fur is always tricky, so I had to concentrate on graduating the two together. 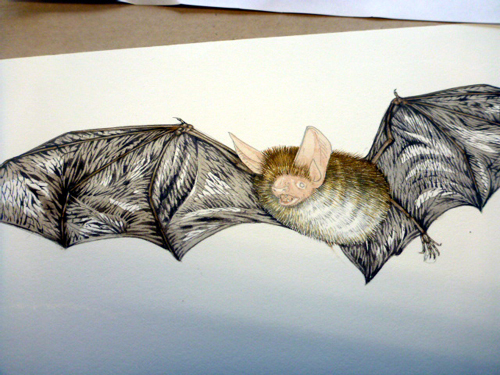 Adding top washes to the wings and fur

Once I felt happy with the fur, as the face and ear region dried I returned to the wings, and gave them a dilute wash of vandyke brown. 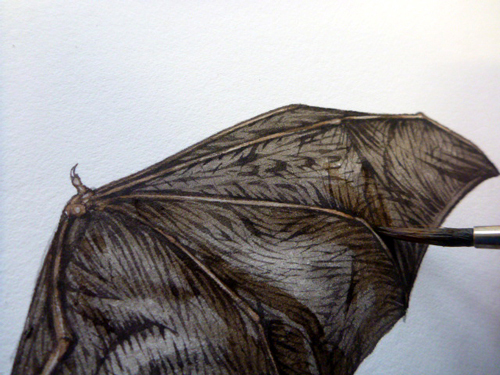 Here I’m using a no. 4 paintbrush as I want to apply a lot of wet wash fast.  It’s more brown, but with some of the rusty orange of the bat’s fur included.  At this point I was still pretty miserable about the wings, so was hoping that successive layers of transparent brown might save the day. 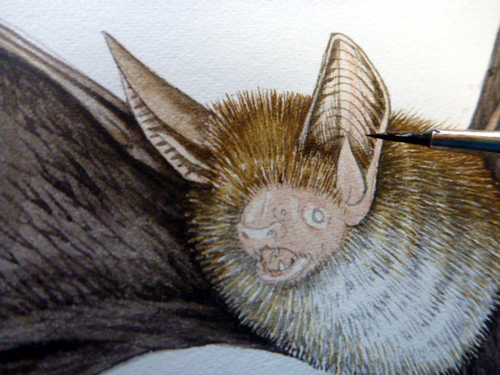 Painting details of the bat ears and face

More detailing of the ears.  These ridges are clear in bats’ ears, and are handy as you can use them as a visual trick to make the tragus come forward. 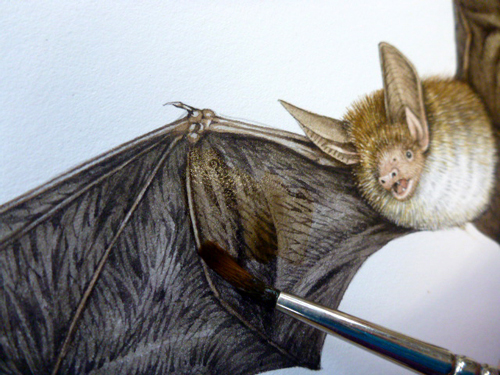 Here you can see I’ve completed the face and ears, and the gradation between fur and flesh.  Still unsatisfied with the wings, I applied a further dilute brown wash, this time with far more orange in it.

Feeling more cheerful after a cup of tea, I put on the final workings into shadow and the detailing of the face.  Thanks to my little dried bats, I think the finished product is fine.  I don’t think I’ll be so bold in the wing detailing again, but it was interesting to give it a try.  And I’ll let you into a little secret; dessicated bats stink.  I was very relieved to be able to put them away again into their little box and paint something more fragrant (a ragged robin flower).