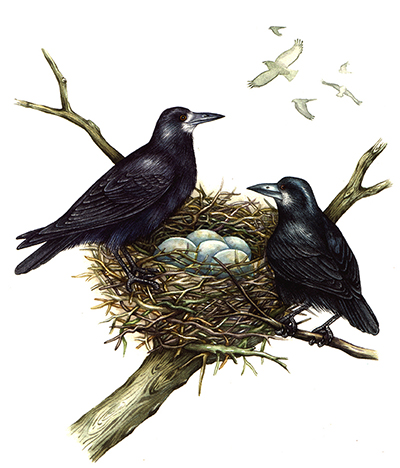 As a botanical illustrator and natural history science art illustrator, I do have my favourites among the animal kingdoms.  And I really love the Crow family, the Corvidae.

I’ve only painted a few species from this family which includes jays, rooks, chough, ravens, crows and magpies; but I love both the way they look and their incredible intelligence and character.

The Raven (Corvus corax) is a big bird, the largest of the crow family, more than 60cm long and weighing more than 1kg, bigger than a buzzard!  It lives in uplands on Wales and SW England, the Pennines and lake district, and the Scottish highlands.  It’s an opportunist, feeding on carrion or plant which it tears with its formidable beak and claws.  It’s a glorious glossy blue-black all over and has long wings and a slightly diamond shaped tail if seen in flight. 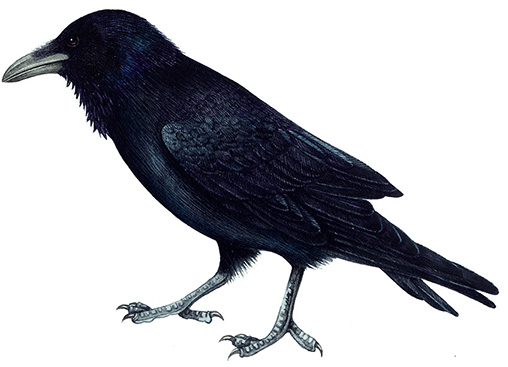 Ravens pair for life and can live up to 17 years.  In the past they were persecuted by game-keepers as they were seen as a threat to pheasant and grouse stock, but recently their UK population has recovered and their range is expanding south and east.  Their nests of moss and twigs are perched high on cliffs, and the males preen and perform bill-caressing during courtship.

Everyone instantly recognizes a Magpie (Pica pica) with its stark black and white plumage and gorgeous greenish black iridescent tail feathers.  They’re a common sight in country and town, long tailed and noisily chattering in groups or alone.  They feed on carrion, chicks, eggs, and invertebrates.

They breed in spring when the males help the females build the nest, often decorating it with pretty or shining objects; those without mates will gather together in flocks.

Magpies are firmly fixed in folklore (“one for sorrow, two for joy…”) and have an undeservedly bad reputation.  As the Wildlife Trusts website states, “Much maligned and often blamed for the decline of our songbirds, Magpies are actually not as villainous as we think. Songbird decline is largely due to habitat loss, development and changing farming practices, not predation by Magpies.”

The last Corvid I’ve illustrated to date is the Rook (Corvus frugilegus).  They have distinctive white-ish grey bases to their beaks, bald of feathers, and their bills are slightly smaller and paler than those of their relative the Carrion crow.  Another distinguishing feature is their rather baggy and feathery “trousers”.  Unlike another close relative, the Jackdaw, the Rook has an entirely black head whereas the jackdaw’s is pale grey and it sports pale eyes.

Rooks are highly social animals, not only nesting together in large groups or “rookeries” (which they sometimes share with another Corvid, the Jackdaw) but also moving around and feeding together.  They eat insects, worms, grain, and root crops and may catch and save food to eat later.  The male will court the female with a display of strutting, bowing and cawing.  They can be found across the UK (though not in northern Scotland) and many people will know exactly where their closest rookery is, because of the endless chattering and ongoing activity.

So there are plenty more Corvids to learn about, and to illustrate; in fact I have a Jay wing I’ve got and have been wanting to paint for some time now; but those that I have drawn this far are stunning and fascinating animals.

For more on these birds and their relatives, please look at the RSPB website, the British Trust for Ornithology website (BTO), and the websites of the Widlife Trusts UK.  If you fancy luring crows to your garden, check out World Birds blog.

If Corvids aren’t your cup of tea, perhaps you’d like to see my blog on Tits instead?