This week I thought it might be an idea to look at one family of British birds, the Tits (Paridae).

Although I’ve not illustrated all the members of this family yet, I’ve done a fair few, so thought it’d be worth taking a look at each in turn.

First up is the common garden bird, the Blue tit (Cyanistes caeruleus).  This beautiful little bird has a flash of a sky blue cap, blue and green back, with a pale-ish yellow belly, and a dark stripe across the eye.  Sexes are alike, and juveniles look like paler and yellower versions of the adult.  They live in woods, parks, gardens; and are a common sight at bird feeders year round.  They eat caterpillars, grubs, seeds and nuts and thus should be encouraged in gardens as they help control garden pests. 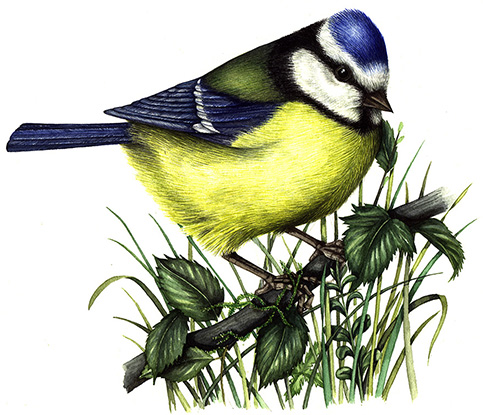 Another common garden visitor is a slightly larger bird, the Great tit (Parus major).  These beauties have glossy black caps and a bold vertical stripe down their yellow fronts.  Like the blue tit, they have greenish plumage on their backs, but lack any sky blue colouring and are the largest of the tit family, clearly bigger than the Blue tit.  They can be seen in woods, parks, and gardens across the UK, and will also join larger flocks of different species of tit in winter as they seek out food.  Their diet consists of insects, seeds and nuts. 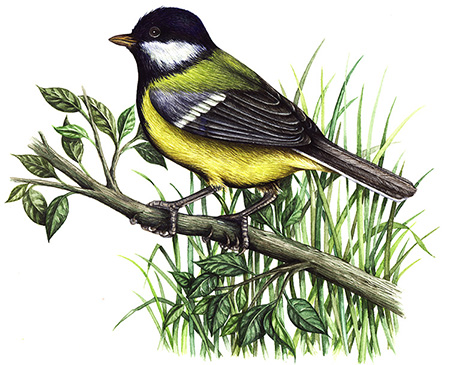 The Coal tit (Periparus ater) is another common (though shy) garden visitor.  Small, and predominantly grey with a black cap, they can also be sen in woodland where their smaller sharp beaks help them access conifer seeds as well as insects and nuts.

Now we come to the complicated matter of telling two very similar-looking birds apart; namely the Marsh tit (Poecile palustris) and the Willow tit (Poecile montanus).  In fact, it wasn’t until 1897 that ornithologists realised the birds came from two separate species! (RSPB website).  Both species are small; and eat insects, nuts, and seeds.  They both live in similar habitats; woodland and thickets in damp places.  However, the Marsh tit is more likely to be found in open woodland and gardens than its cousin.

The Marsh tit is a greenish-brown colour with a smart black cap, dark bib, and a white-ish belly. 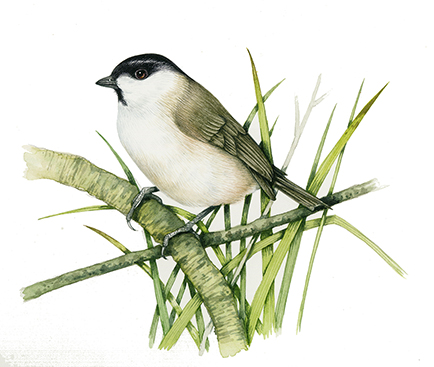 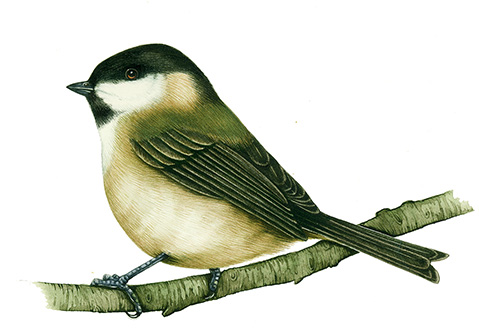 Unfortunately, telling them apart is even harder because both are “red status” which means they’re globally threatened, and have seen massive decline in breeding population and range over the past 25 years (RSPB website).  Seeing either should be relished.

And here they are next to one another for comparison.

Two other species I’ve not illustrated as yet are the Bearded tit (Panurus biarmicus), an amazing looking reddish brown bird, graced with a black “moustache” and found in reedbeds; and the Crested tit (Lophophanes cristatus) which is found mostly in Socttish pine forests and has a remarkable tufted crest.

So what, I hear you cry, of the beautiful Long tailed tit (Aegithalos caudatus)?  Well, although the name suggests it’s a member of the Tit family, it is in fact related to a different family entirely, the Long-tailed tits or Aegithalidae.  More species are found in Asia.

This lovely bird is flushed dusty pink and travels in flocks, feeding upside down, long tails making them instantly recognizable in gardens, woodland, hedgerows, parks and farmland.  Like the Tits, they eat insects (and seeds from time to time), but it’s important to remember they belong to another family. 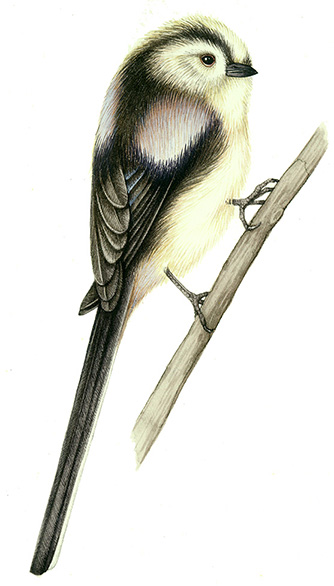 For more on the Paridae, please take a look at the RSPB website, British Trust for Ornithology Website (which lists species alphabetically); and the Wildlife Trusts website.