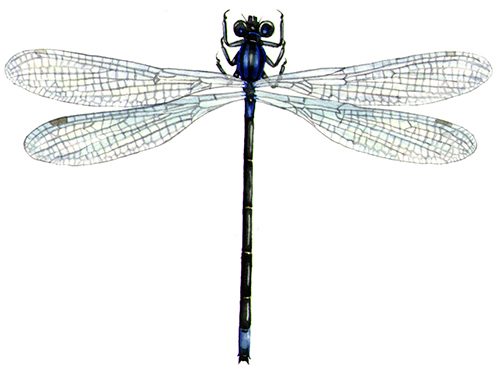 Entomological illustrations and natural science illustrations of damselflies are not an uncommon request. Over the years I’ve completed many.

One might think the real challenge with such a subject is the wings; but that’s not the case.  A damselfly wing is not a hard thing to render.  You just need a fine tip to your brush (I favour a winsor & newton series 7  size 00 brush). 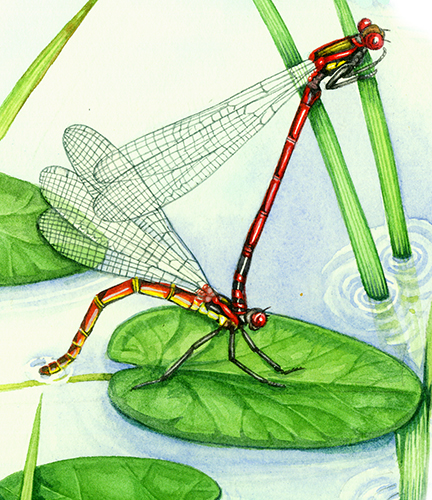 The hardest part of illustrating a damselfly is getting the tiny differences on the abdomen and thorax right.  The best resource for this information that I’ve found (other than a living specimen) is British Dragonflies by Smallshire & Swash.  Coupled with resources available online through the British Dragonfly Society (BDS) you’re well on your way to being able to identify (and illustrate!) many of our damselflies. 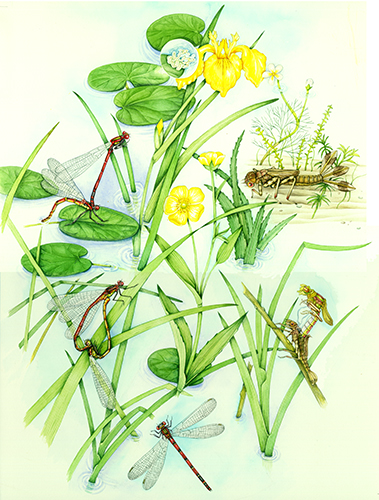 Below are five of the commonest British damselflies.  There are 20 species in the UK, and all are members of the Zygoptera family.  Zygopterans can be distinguished from the stronger flying dragonflies.  They have thinner bodies, and hold their wings along their abdomens (except for the willow damsels). Each of their four wings is the same size and shape.  They stay close to water.  Flight is weak and fluttery.  The larvae have three external gills (lamellae) at the tip of the abdomen, and can’t easily be mistaken for anything else. 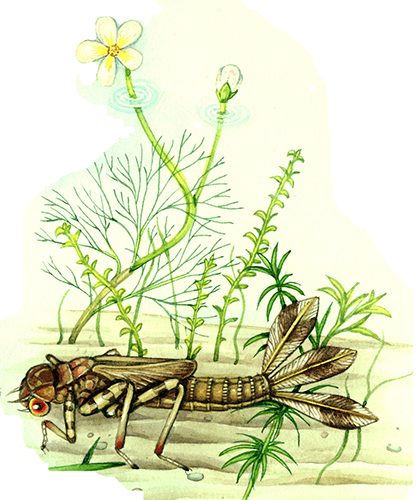 Easiest to identify is the Beautiful demoiselle (Calopteryx virgo).  It’s instantly recognizable because of its dark and iridescent wings and body.  In all cases a male is illustrated.  (For more on painting iridescence, have a look at my blog). 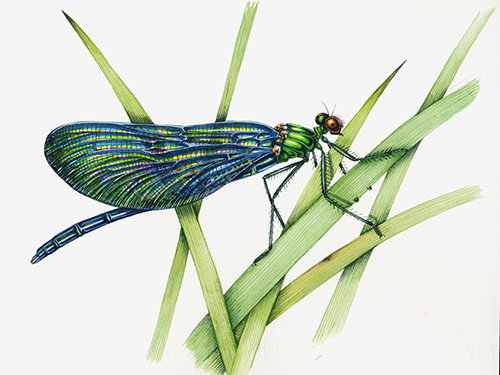 Next is a very common damselfly, the Large red Pyrrhosoma nymphula (see above for its life-cycle).  This damsel varies a lot in colour, but can be distinguished by black legs and wing spots, and a black stripe on the side of its thorax. 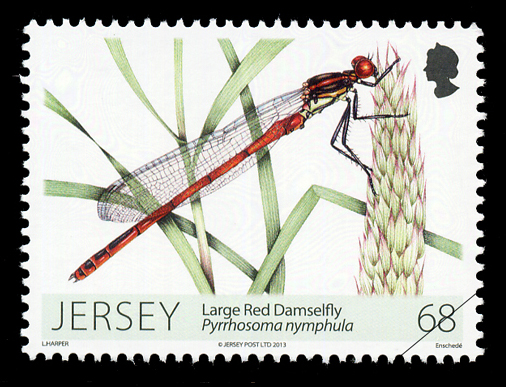 For more on creating a series of dragonflies and damselflies on stamps, check out my blog

Another common damselfly is the Common blue, Enallgma cyathigerum. This insect differs from other blue and black damsels in having no black “spur” marking on its thorax edge; and having broad stripes on the thorax edge.  It’s medium size and will fly further from the water margins than other similar species. 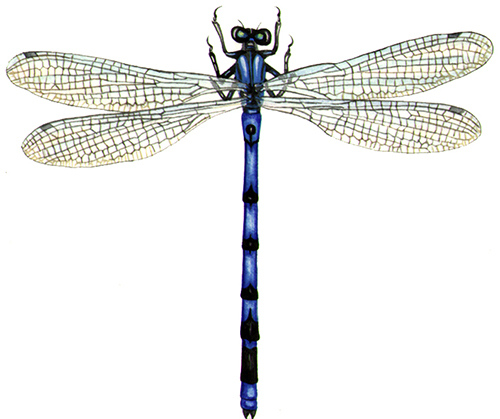 A similar damselfly is the Azure damsel, common across the UK (although rarer in Scotland).  I rather like the written description from Britain’s Dragonflies by Smallshire and Swash, “Think of the male as a snooker player: he has a cue (the “spur” on the side of the thorax), wears a bow tie [on abdominal segment] S10 and carries a beer glass (S2)!” p.75 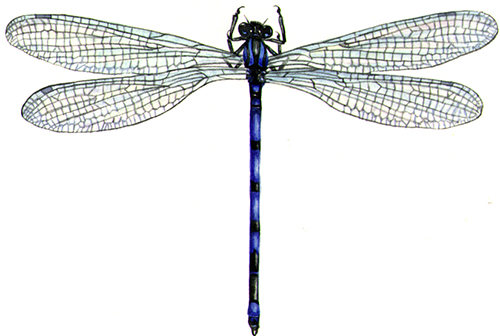 The Blue-tailed damselfly (Ischnura elegans) has an enormous amount of colour variation within its species.  Its abdomen is mainly black, and it has two-tone diamond wing spots.  Of all the damselflies, it spend the longest time mating (up to 6 hours) so if you see damsels in the distinctive “wheel” mating form (see the Large red damsel life cycle above) it may well be this species. 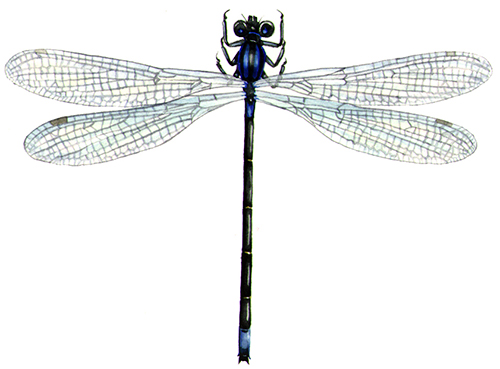 These are the most abundant of the British damselflies across the UK, but are only 5 of the 20 species regularly recorded here.  Look out for them across lakes and still water, even ditches and puddles.  For a handy guide, it’s worth investing in the Field Studies Council “Guide to dragonflies & damselflies of Britain” .

For an explanation of how I illustrated a new species of damselfly that’s just been discoverd, check out my blog