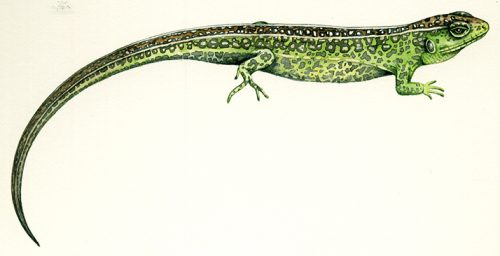 Of the six species of reptile found in the UK (see last week’s blog on snakes), three are lizards.  My scientific illustrations of these reptiles have been used by the Wildlife Trusts and books (The Bumper Book of Nature by Stephen Moss, amongst others.)

Our first British lizard is often mistaken for a snake, but is in fact a legless lizard, the Slow worm (Anguis fragilis).  This is a beautiful slender bronze creature, whose only clear markings are a black vertebral stripe in the females.  It can reach 45cm in length.  Like other lizards (and unlike snakes) the slow worm has eyelids.  It is also able to shed its tail; the lizard rushes away leaving a thrashing tail behind to distract predators as it escapes. 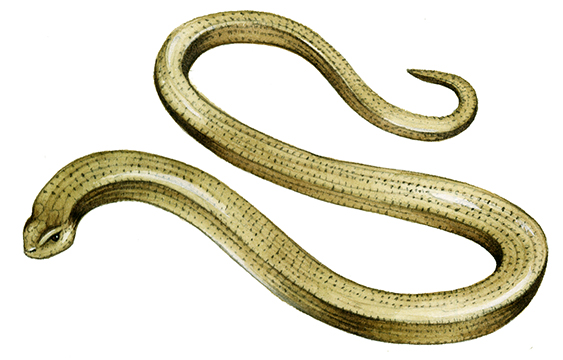 All reptiles lay eggs, but the slow worm is ovi-viviparous, which means the young are born within an egg membrane.  This breaks moments after birth.

Slow worms eat slugs and snails, and can be found living unobtrusively in garden compost bins, churchyards, railway embankments, and areas of wasteland.

The Common lizard (Zootoca vivipara) is widespread (and is the only reptile that exists in neighbouring Ireland); often found on moors, heaths, and grassy areas.  They are about 15cm long and brownish with mottled markings, however, there’s an enormous range of colour variation; from black through bright greenish. 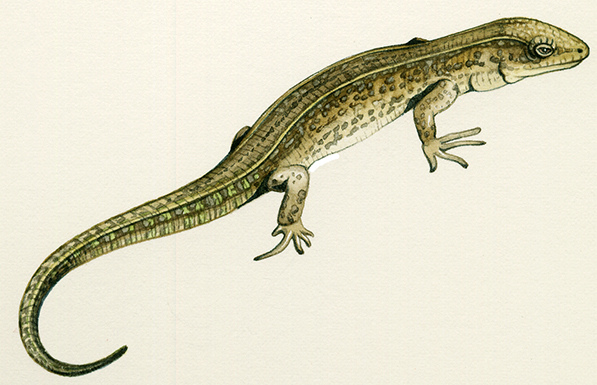 They are viviparous, which means they give birth to live young.  In reality, this means they retain their eggs internally until birth.  The young tend to be darker in colour, becoming more coppery as they age.  The common lizard feeds primarily on insects and spiders.

Common lizard basking in a field

The third species of British lizard is the rarest; the Sand lizard (Lacerta agilis).  This animal is only found on southern heathland (although the Amphibian and Reptile conservation Trust (ARC) are re-introducing them to many other location across the UK).  About 20cm long, it has more striking markings than the common lizard, with patches of white.  Males tend to be bright green, and in the breeding season this colour can be quite dramatic.  As with the common lizard, their main diet is invertebrates. 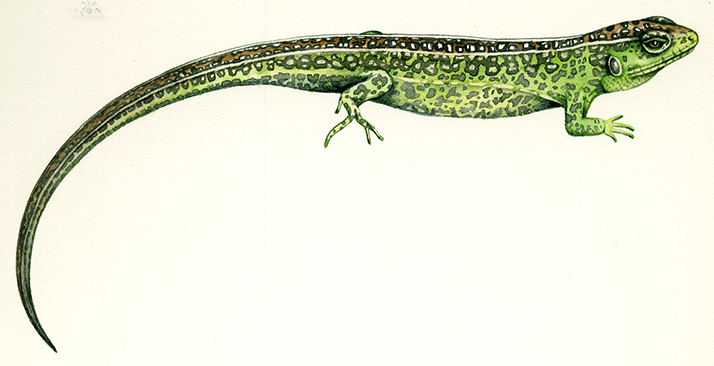 To see all our reptile species compared, have a look at the BBC Wales lizard identification site; or the home page of the British Amphibian and Reptile Conservation Trust (Arc).

Please remember, it is against the law to deliberately kill or hurt any British reptile; so enjoy watching and identifying them, but don’t be tempted to interfere with them.

For more on British reptiles, please take a look at my blog on Snakes of the UK.