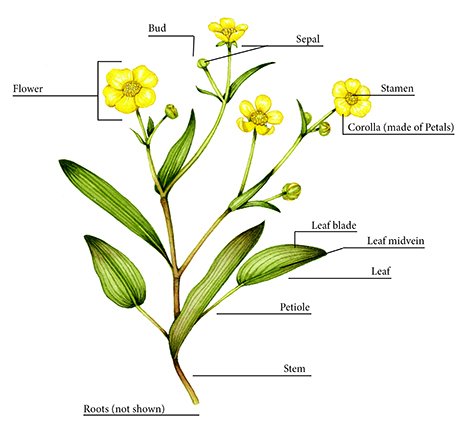 If you’re going to illustrate botany or natural history specimens, you need to know what you’re drawing.  Biology provides words for almost every part of an animal or plant.   Although sometimes these terms sound intimidating (many have latin roots so sound unfamiliar) they don’t need to put you off.

This blog is an introduction to the basics of botany, so you can tell your corolla from your sepal, and your stem from your root.  Below is an annotated illustration of Lesser spearwort (Ranunculus flammula).

Many of these terms will be more than familiar; a leaf, roots, a stem, a bud, and a petal need no further explanation.

A petiole is a stem that bears a leaf.  The blade of a leaf is the flesh of it, and this is attached to a central midvein.

Botany: What is a flower?

In this illustration the term flower refers to the the part of a plant which has the potential to produce seeds; namely the reproductive organs (stamens and carpels), the coloured corolla (made of individual petals) which surround them, and the (frequently green) calyx which is made of individual sepals.  More on this below.

In botany, you often hear flowers referred to as the inflorescence of a plant.  Strictly, this not only includes the flower (as defined above) but also the part of a stem which bears these flowering parts.  Basically, anything above the last leaves on the stem is the inflorescence.

A sepal is the small (often) green leaf-like structure you often find under petals, or enclosing them whilst still a bud.  A calyx just refers to all the sepals surrounding one flower taken together.

Botany: Parts of a flower

So now we get to the nitty-gritty; the parts of a flower.  Bear in mind that there’s an enormous variety of form in flowers; and these terms have to be flexible enough to cover every plant species out there.  Just think of the difference in shape between a lousewort (Pedicularis sylvatica), a Knapweed flower (Centaurea scabiosa), and a morning glory (Ipomoea indica) and you’ll see what I mean.  For mroe of my flower illustrations, please visit the online gallery. 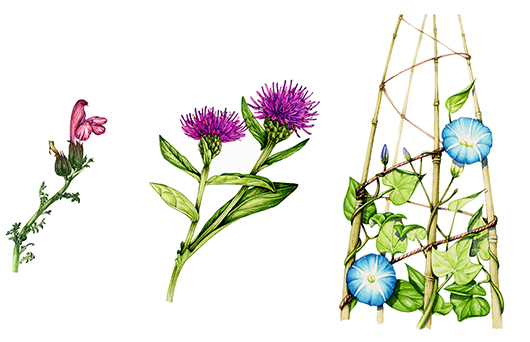 Here is a basic diagram of the parts of a flower (apologies for the pixelation): 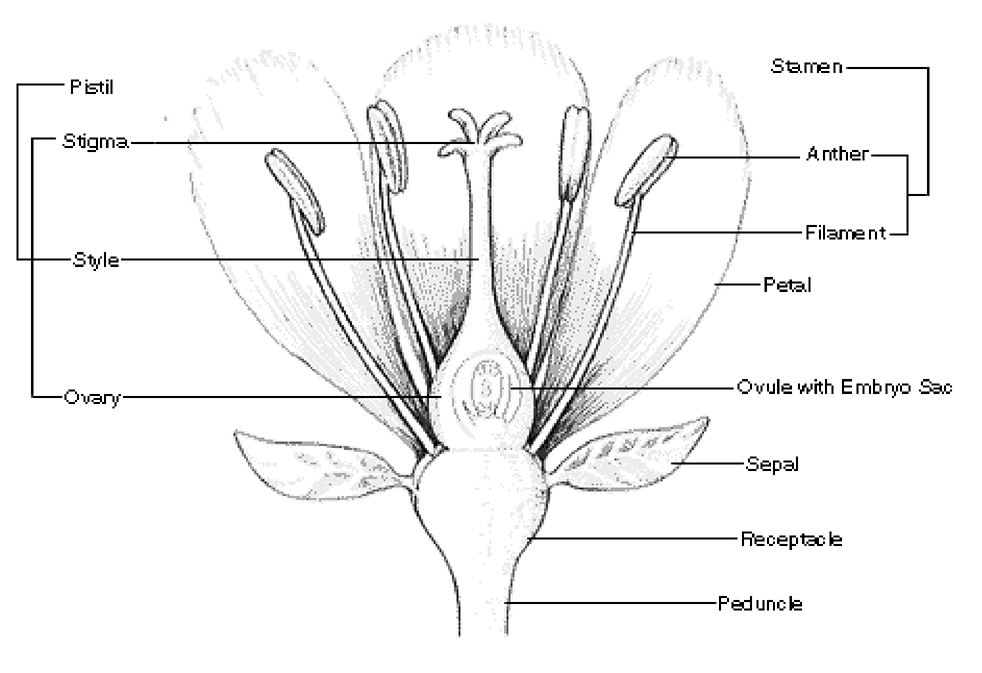 Let’s start with the area surrounding the centre of the flower, which is often brightly coloured (and most of the reason why people think they’re so pretty).  This whole area is known as the corolla, and (as mentioned before) is made of petals.  Non-reproductive, the corolla is often used to dazzle and tempt potential pollinators to the flower.

Botany: Parts of the Male flower

Now for the male parts of our flower.  These are the stamens, and produce pollen.  Pollen is carried (by wind, water, or insect) to another flower of the same species to fertilize it.  Each stamen is made of a filament, or stalk, bearing an anther where the pollen is produced.  These can be all sorts of glorious colours, they’re very easy to see on florist’s lilies as they’re large and produce a vivid orange pollen.  The androecium refers not only to the male reproductive parts, but also to the ring or whorl which carries them. (A flower has, usually, four rings. From the outermost to the centre of the flower they are: the calyx, the petals, the androecium and, at the centre, the gynoecium).

Botany: Parts of the Female flower

The female reproductive part of a flower is made of reproductive units known as pistils or carpels. A carpel is a single (or a simple) pistil, and consists of the ovary, style, and stigma. One flower may have many carpels (for example, if you cut an apple in half there’s a star shape with a seed in each part.  Each of these chambers and seeds has arisen from one carpel, so an apple has 5 carpels.)  Another term used to describe the female parts of a flower is the gynoecium, this refers to all the pistils or carpels occuring in one flower.

Pistils are in the middle of the flower, and are typically made of a swollen base, the ovary, a style, and a stigma.  The ovary contains ovules, female reproductive cells or potential seeds; a stalk which comes out of the ovary (called a style), and a stigma.  The stigma is the tip of the style and is receptive to pollen grains whcih might land on it.  It is often sticky, as its job is to trap the pollen grains so they can burrow down the pollen tubes that they themselves create, into the ovary and fertilize the ovules with their male gamete, thus creating fertile and viable seeds.

The part of the plant to which the floral components is attached is the receptacle. The stem supporting the flower is known as the peduncle.

For another recap on these parts, please visit Teleflora’s site.

Hopefully this might help to clarify some of the basics.  Sometimes terminology seems terribly confusing, and this is because biological terms will sometimes overlap in meaning.  For more on flowers and the importance of their ovary position, keep your eyes out.  I’ll be blogging on it soon!