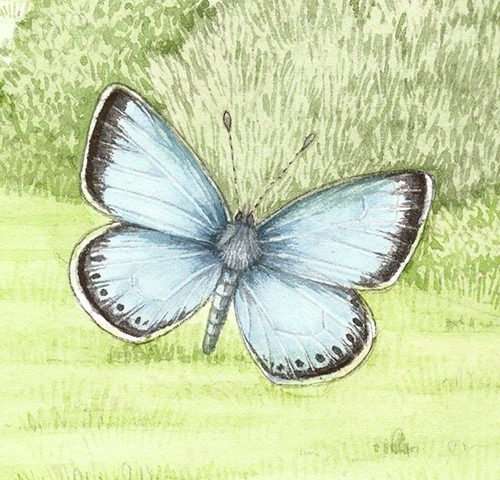 Scientific illustration involves learning about your subjects, as well as illustrating them.  I’ve always been amazed by  blue butterflies (family Lycaenidae). I love their vivid hues and  their fascinating life-cycles.  Their interactions with ants amaze me.

Most of the information in this blog comes from the website of Butterfly Conservation.  This charity is concerned with recording and researching British butterflies and moths, and preserving them and their habitats.  How to save the blue butterflies?  If you can get the right food plants, turf length, and habitat; then you can hope to sustain a healthy population of the butterflies too.

This butterfly is widespread across the UK.  It differs from other blues by its wing margins.  They are white without black veins.  As with most blues, the female is brown on top.  She has orange markings toward the wing margins (in the background of my illustration below).  She is sometimes confused with the very similar looking Brown argus butterfly (Aricia agestis).  Its males and females are brown with orange wing margins. 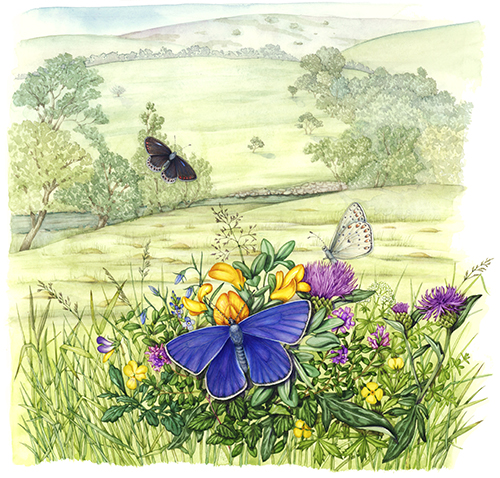 Life cycle of the Common blue

Eggs are laid singly on birds’-foot trefoil. The caterpillars feed on the underside of the leaf.  In their fourth (and last) instar, they become attractive to ants.  They emit sounds as they pulse their head in and out of their body.  Ants come and tend to them and protect them.  Ants and may even take them into their nests.  They do the same for the pupa, which lie on the ground.  These are looked after and sometimes buried. 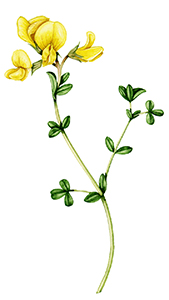 The blues are often very species specific in their food-plants; the Small blue (Cupido miniums) only feeds on kidney vetch. The Common blue feeds on bird’s-foot trefoil; and several species rely on Horseshoe vetch.  The Holly blue (Celastina argiolus) has a more varied diet.  It switches from holly to ivy in the summer. 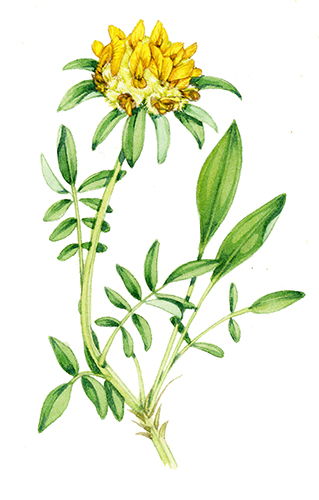 Life cycle of the Chalkhill blue

The Chalkhill blue (Polyommatus coridon) is much paler than its cousin species with milky blue wings and a black wing border.  Its population is currently in decline, mostly due to habitat loss. 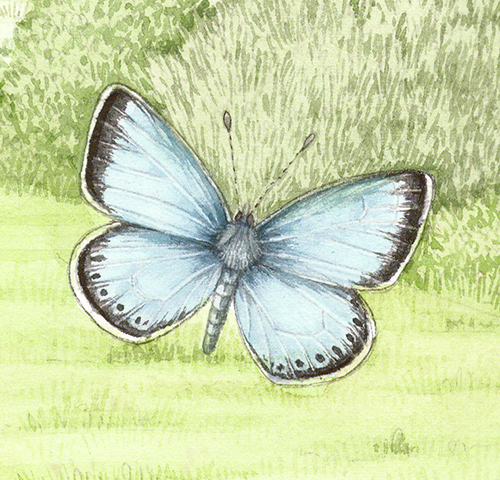 The one food plant of this butterfly is the horseshoe vetch. 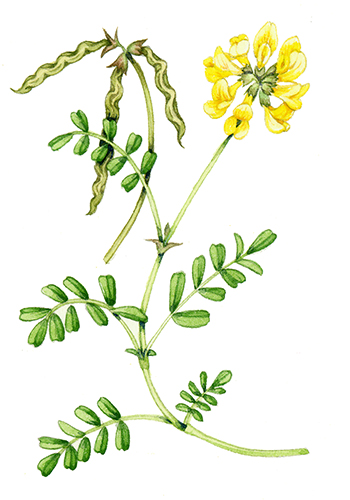 It too has a close relationship with ants. Yellow meadow ants (Lasius flavus) are its chosen host.  It attracts the ant with secretions from its honey gland. The ant colony protect and bury the larvae.  This is how they help it escape predation. 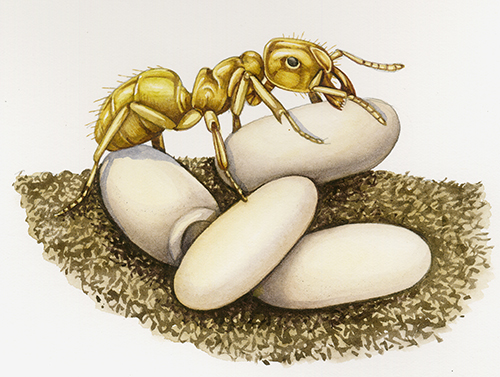 This blue lays eggs in short, grazed turf.  Caterpillars feed on horseshoe vetch.  They produce sweet secretions from their “honey glands”.  This attracts ants who protect them, burying them at night.  The caterpillars overwinter.  They pupate in the soil early in the spring, often within an ant nest.  Although the Adonis will interact with many different ant species, they seem to favour red ants (Myrmica subleti) and black ants (Lasius alienus).

Silver studded blues also rely on ants.  The females only lay eggs if they can detect pheremones from an ant colony. (This is normally the black ant Lasius niger or, on chalkier habitats, L. alienus).  The ants pick up the caterpillars soon after they hatch and take them to the ant hills.  Here they’re tended by the ants til they emerge as adults.  This species feeds on heather plants.

This is our rarest blue butterfly, and easy to spot due to the large black spots on its forewing. 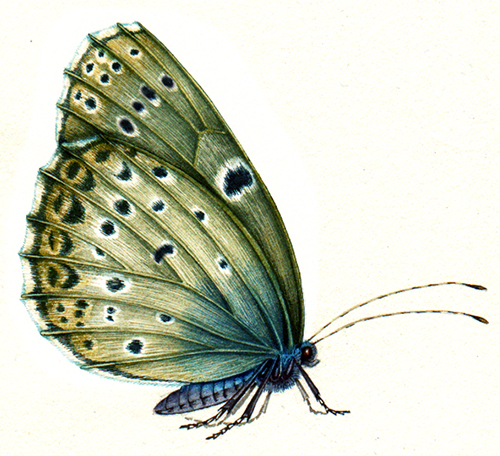 It lays eggs on the buds of wild thyme, and once the caterpillars have fed and grown to about 5mm long they drop to the ground, and wait to be found by red ants (M. subleti). 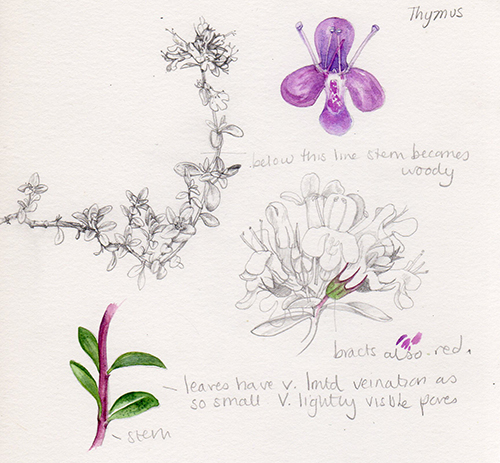 The larva attract them by producing sticky secretions from a “honey-gland”.  The ants carry the caterpillars to their nests, and this is where it becomes wonderfully macarbre.

The caterpillars feed on the grubs in the ant nest, overwintering, and hibernating til they emerge from their pupa in May; unable to spread their wings until they’re free of the soil.