I picked up two illustrations from my excellent framing workshop Fitting Frames  this week.  I also had a jigsaw of the Waterbugs and Dragonflies illustration made up.  The painting is destined for a house with small children in, so I’ve included that in the photo too. 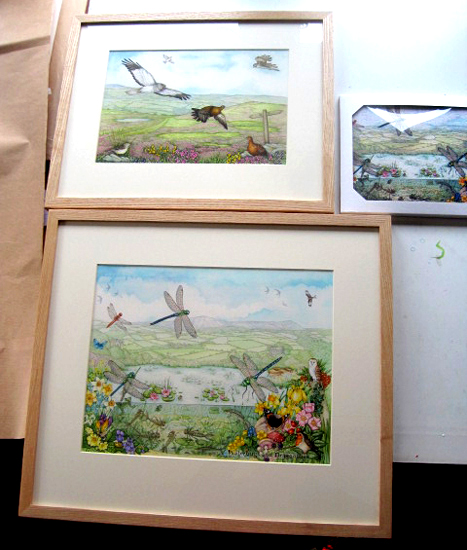 Paintings that have been sold

I  sold a framed illustration of mixed wildflowers; which included hawthorn, sloe, and pyramidal orchid.

Another two of my illustrations, a salmon and a trout, raised a very decent amount at our local school Christmas fair (Hay on Wye Primary School), which was gratifying.

I decided a useful project would be to research and paint an illustration of diagnostic symptoms, to help people identify ash die-back.  According to the Woodland Trust, ash die back has been identified at more than 257 sites across the UK, and a local friend has just found the first case in Herefordshire.  What surprised me was how many different traces the disease leaves. Cankers appear, and there’s damage to the stems.  The crown withers.  Sprigs and leaves curl up and die (with a tell-tale black midrib along each leaf).   White fruiting bodies appear on leaf stipes and on blackened twigs in leaf litter. In all cases the fungus responsible is Hymenoscyphus pseudialbidus.  Internal damage to the wood leaves it greyish brown and mouldy.  I only have the thinning of the crown and a dying sapling left to paint, then the piece will be completed. 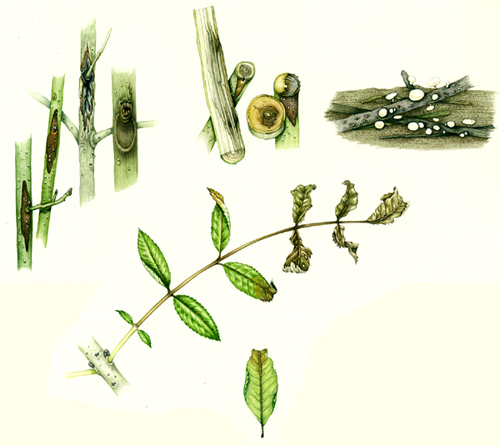 It’s a fascinating project, but also enormously upsetting; I’m very fond of ash trees with their hopeful upturned branches and beautiful black buds.  Along with many other people, I will be deeply saddened as the effect of this disease becomes more apparent across the British landscape.

I’ve also updated business contacts and done some more promotional work.   I hope to send out my Christmas mail-shot next week.