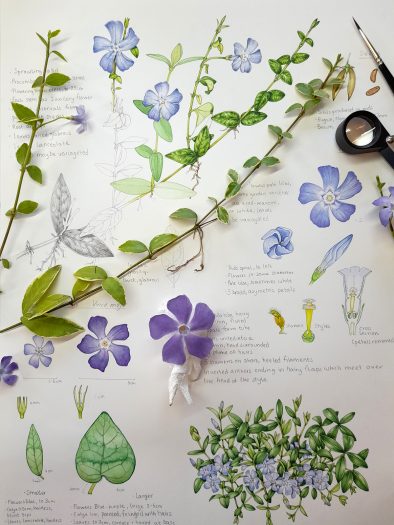 Periwinkle species feature on the list of a recent job of invasive plants I’ve completed for FOR Sweden.

Another appealing aspect of the Periwinkle species is that telling these two species apart isn’t nearly as tricky as some plants can be (see Comparing Hogweed Heracleum species, and Comparing Goldenrod species  for a taste of what I mean!)

Lesser periwinkle is, as the name suggests, smaller than Greater periwinkle.  Although both have a spreading growth pattern, and put out vegetative stems, all aspects of the Lesser are a little smaller than that of Greater.  In both cases, these trailing stems help the plant colonise new areas, and can form pretty thick ground cover in ideal conditions.  This isn’t surprising, the trailing stems can be up to a meter long! 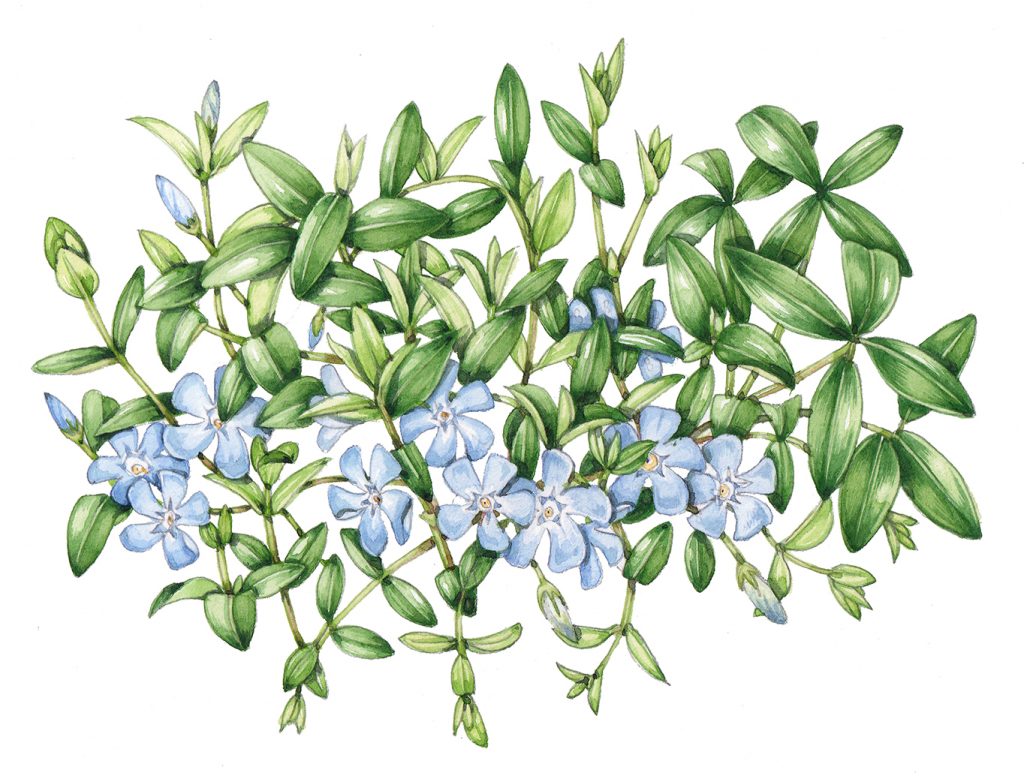 Lesser periwinkle leaves are around 4cm long, whilst those of the Greater periwinkle are almost twice the length, averaging 6cm length.  There’s a clear difference in leaf shape too.  Lesser periwinkle has elliptical leaves with a pointed tip. 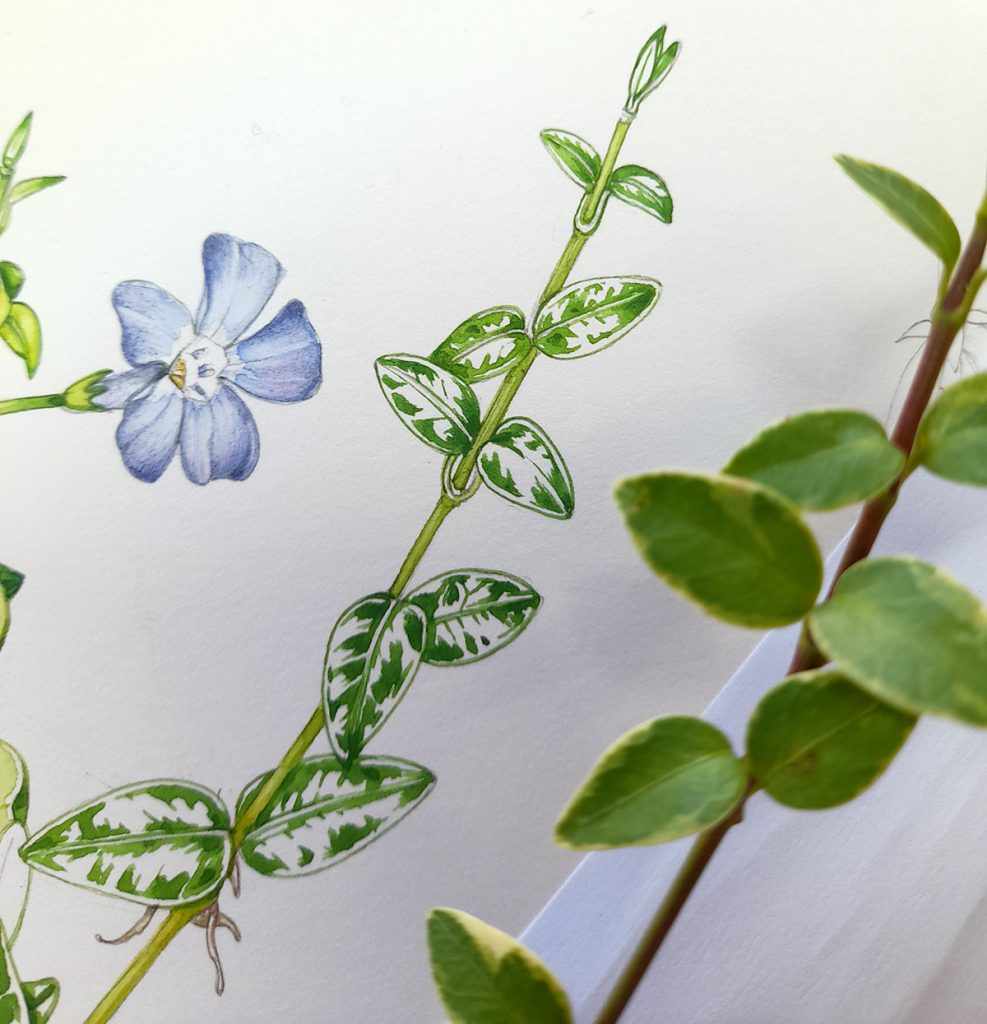 Greater periwinkle leaves are heart-shaped (or cordate; for more on terminology of leaf shape check out my earlier blog). 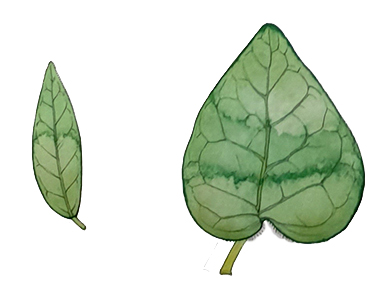 The petiole, or leaf stalk is noticeably longer in Greater, up to 20mm.  Lesser periwinkle leaves lie far closer to the main stem, with petioles no longer than 3mm. 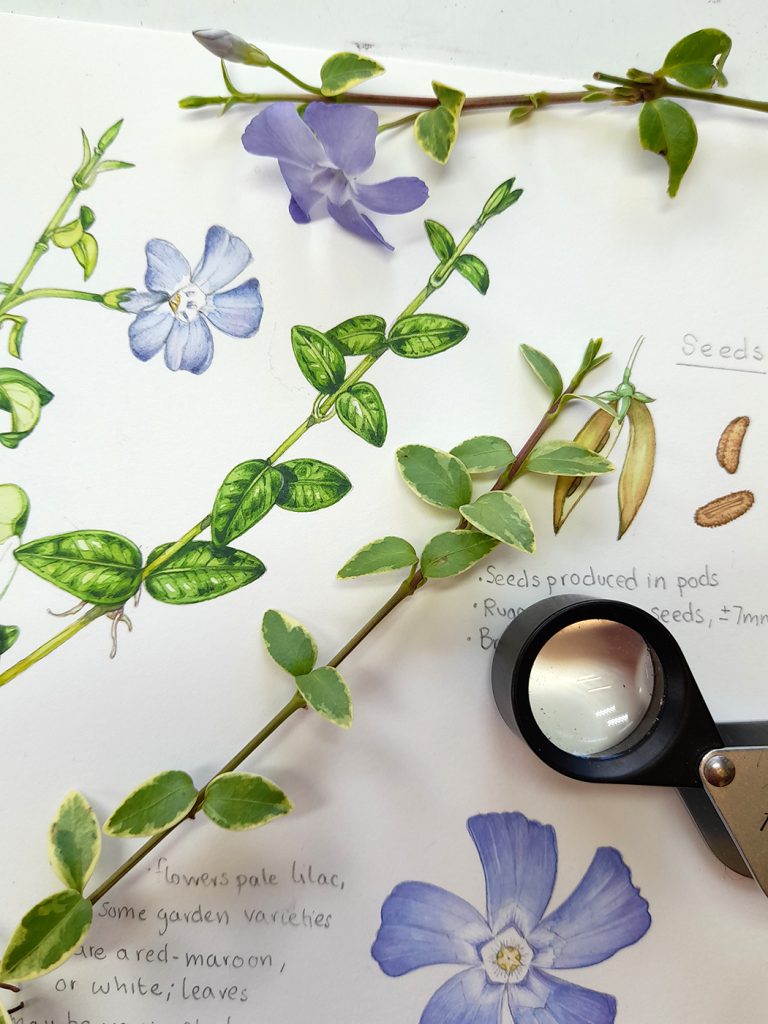 Finally, the leaves of the Greater periwinkle have tiny hairs at their base.  These are absent in the Lesser periwinkle.  I did spot these hairs, but it took some doing, and was an instant diagnostic.

I did have the challenge of only having a variegated species of Vinca minor to work with, disregarding the paler blotches can be quite tricky.

The stems of both plants look similar, being hairless and green, or flushed crimson.  However, Lesser periwinkle stems can root along their length, while Greater periwinkle tend only to root at the stem tips. 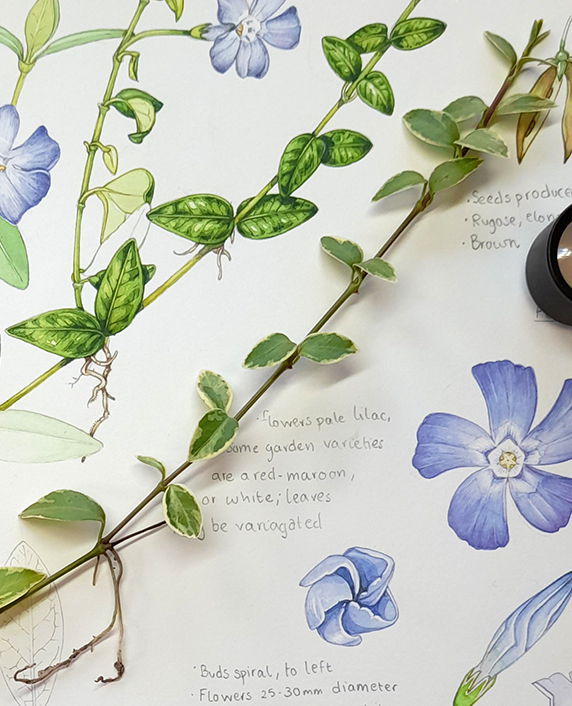 Lesser periwinkle showing roots along stem length (not only at tip)

Lesser periwinkle flowers are smaller than those of its cousin.  They average 2.5cm across, whereas those of Greater periwinkle are around 5cm wide.  Both periwinkle species have five slightly unequal petals. 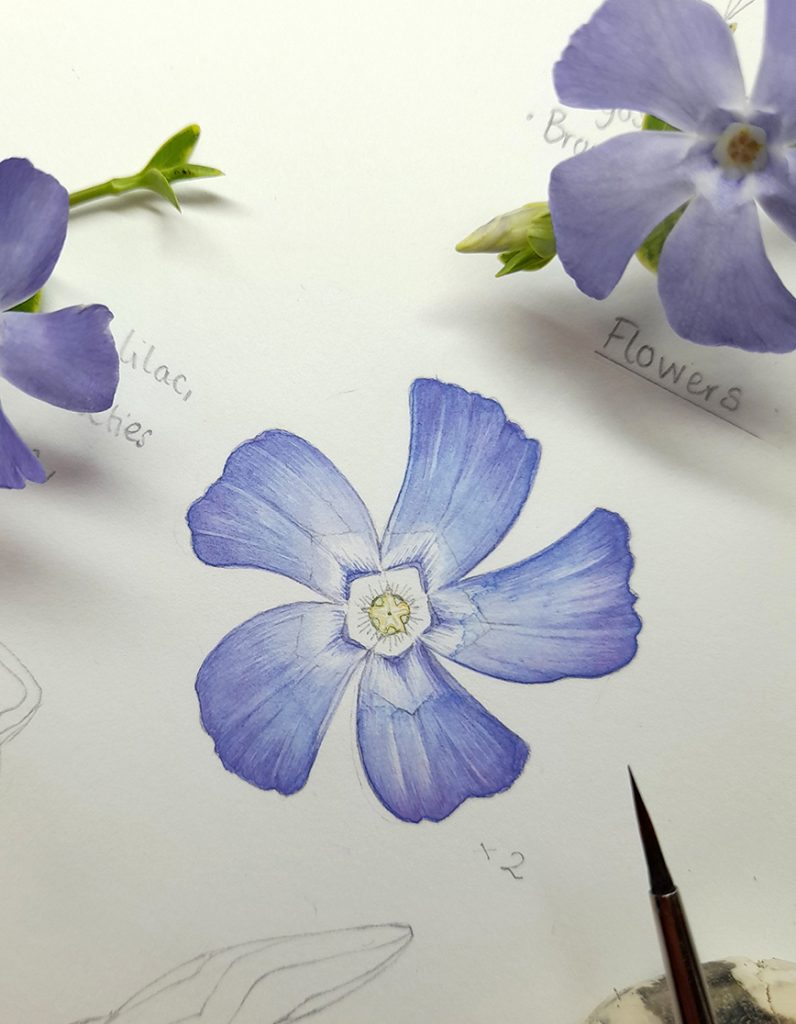 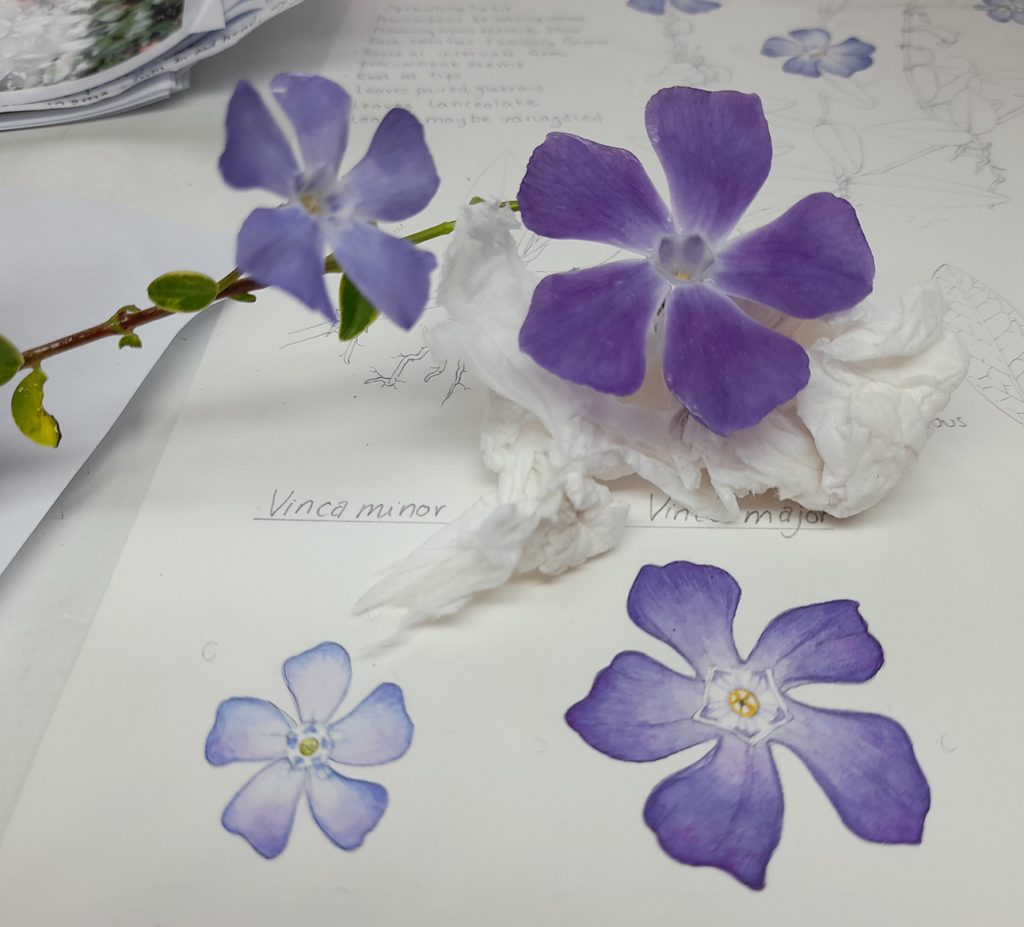 I was incredibly lucky to find both periwinkle species in flower as I illustrated them, it would have been hard to get the colours right without the flowers right there.  The V. major flower was noticeably smaller than those blooming earlier in the summer, but as long as you’re aware of these seasonal differences you can compensate.

Obviously, it’s vital to keep specimens fresh as you draw them.  I rather enjoy the classy tone the Babycham glass gave to proceedings… 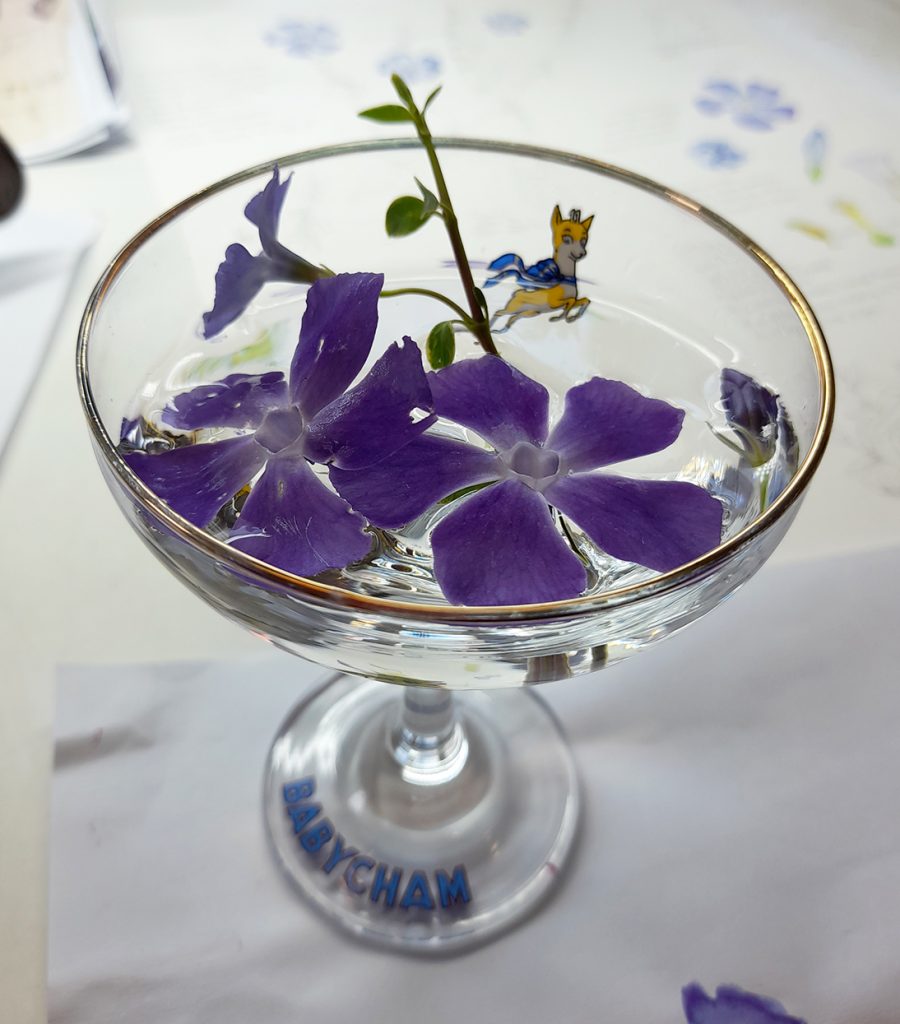 The calyx is the outermost part of a flower, which is frequently green and often divided into sepals.  In the periwinkles, it helps differentiate between the species.

V. minor has a smaller calyx (0.5cm long) which is hairless, and has blunt tips.

Calyx of V. major are twice the size, and have pointy tips.  They are fringed with hairs which are absent in the Lesser periwinkle calyx. 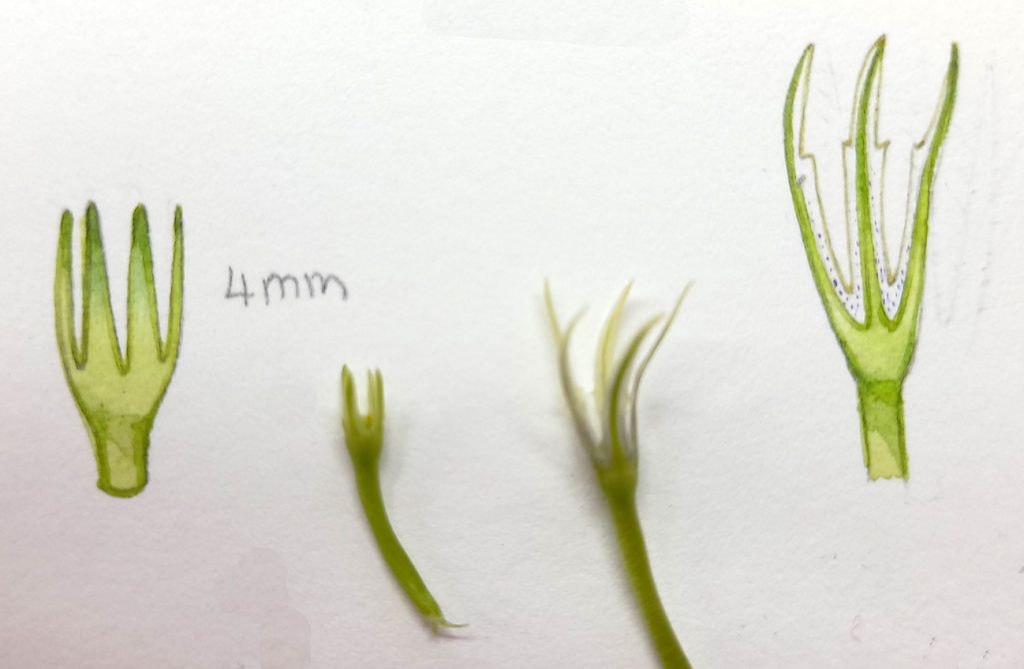 I’m not lying when I say spotting the differences in hair distribution, even under my dissecting microscope was a challenge.  But then I only had one or two calyx from each species to examine.  Looking for such distinctions is always easier when there’s a glut of fresh material to examine!

Before looking at these plants in detail, I didn’t even realise there were two species of periwinkle!  It’s lucky that telling them apart was so straight-forward, and that I managed to get my hands of live reference before autumn closed in.

So if you want to know if that plant in your garden is Lesser or Greater; look our for leaf shape and stalk length, flower size and colour, and get that hand lens out on the calyxes. 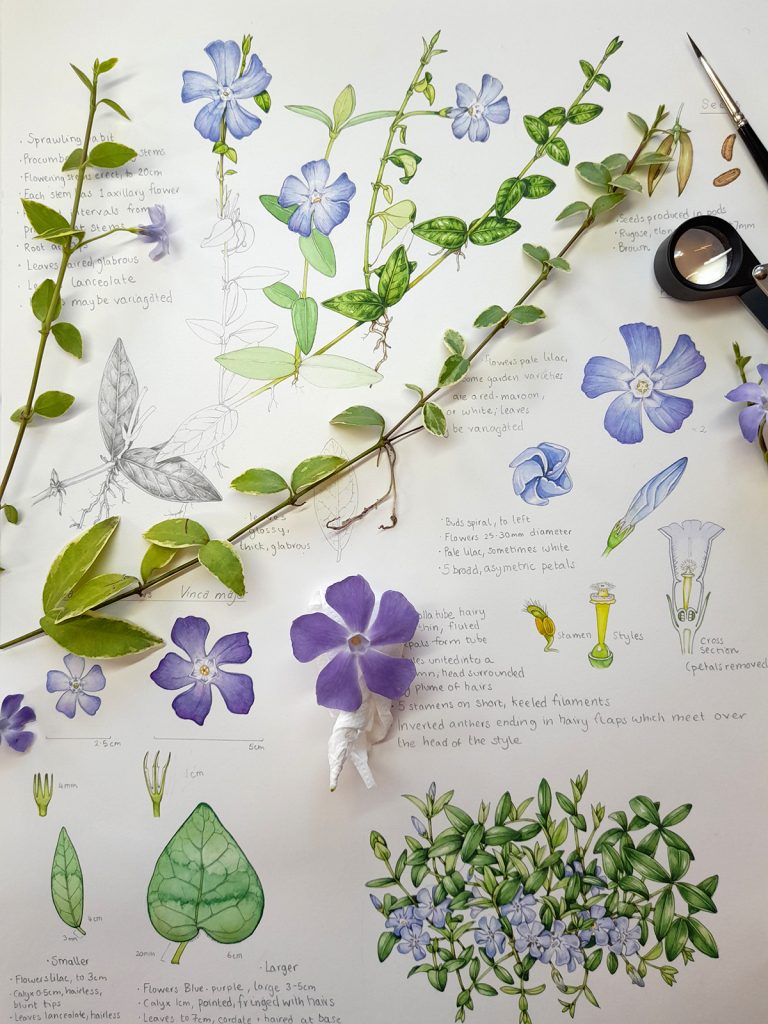 This unframed original illustration is available to buy for £125, if you’re interested do drop me a line on info@lizzieharper.co.uk.