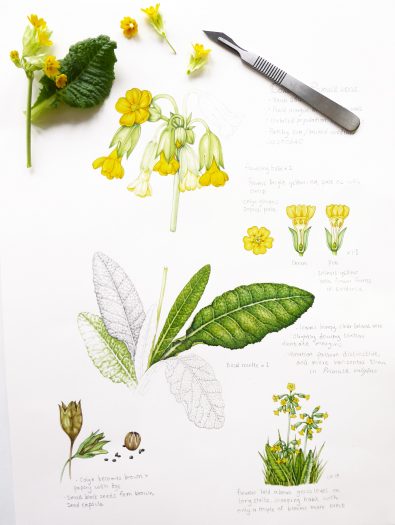 Late this spring, I completed a private commission to illustrate the Cowslip, Primula veris, as if doing a sketchbook study. 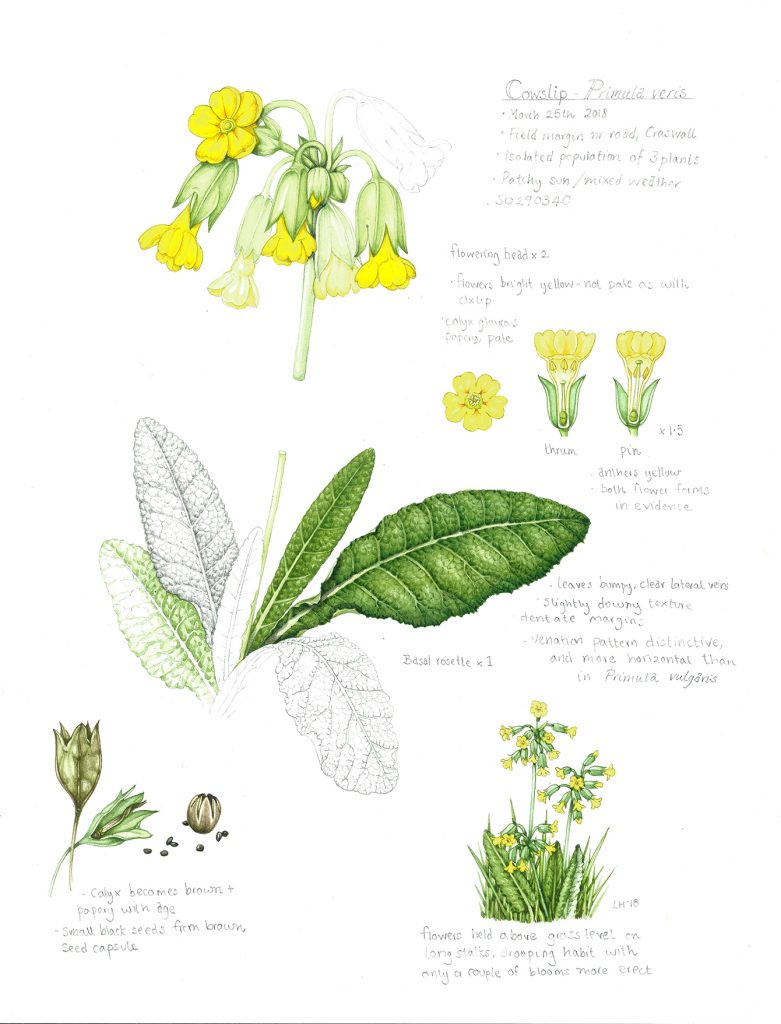 Sketckbook study sheet of the Cowslip

These are almost my favourite sort of commission as I can spend time really getting to know the plant, examing it from different angles, dissecting out its structures, checking out its growth habit, and exploring the intricacies of leaf venation and petal colour.

I’ve completed illustrations of cowslips for clients before, but not in this forensic sketchbook detail. 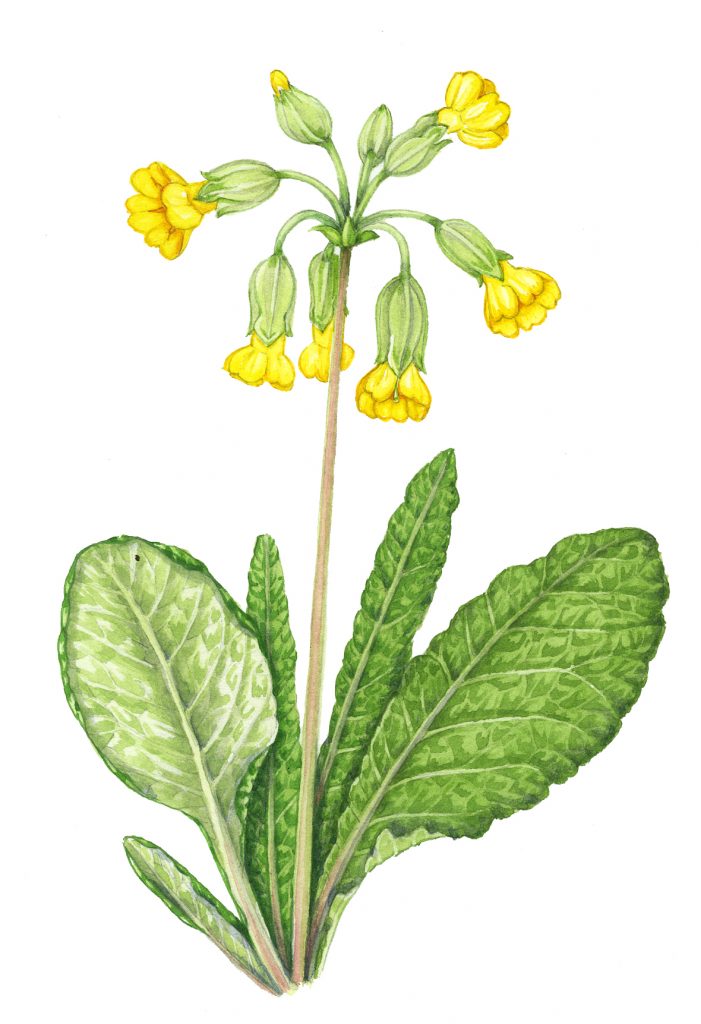 Waiting for the Cowslips to bloom

Sketchbooks studies really need a specimen to work from, so I had to wait for a patch of cowslips to come into flower.

This year they were late, I think they were held back by the late March snowfall.  it wasn’t until May that my cowslips, on a roadside verge near a windswept meadow, came into bloom.  They’re the same place every year; with botanical illustration you end up having a mental map of sites where different wildflowers bloom.  These flowers are between the heights of Hay bluff and the farming village of Craswall.

I also have cowslips growing in the garden (my garden is full of “weeds”, mostly seeds from different things I’ve painted over the years, or plants I’ve planted out once I’ve illustrated them), but somehow I wanted to base this study on this little clutch of nodding flower heads by the edge of the field.

Cowslips are related to the primrose and oxlip; this becomes apparent not only when you look at the yellow flowers, but especially when you compare the crinkled, textured surface of the cloudy pale green leaves. 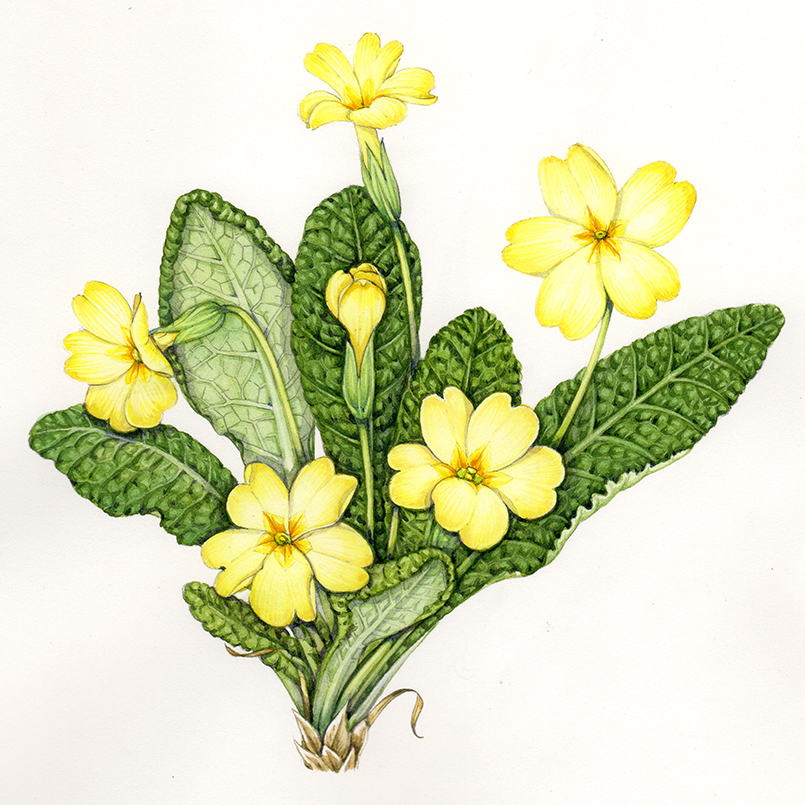 Oxlip and cowslip flower at the same time, and telling them apart can be tricky.  First, look at the colour of the flowers.  Oxlip are a paler, colder yellow with a tinge of green.  Cowslip flowers are a richer gold colour.  The oxlip flower looks a whole lot like a bunch of tiny primroses on top of a flowering stalk, cowslips don’t.  Cowlsip leaves often curve over downwards at the edges, so appear more rounded than oxlip leaves.  Oxlip calyx have darker green nid-ribs; the cowslip calyx is uniformly pale green in colour. Some say (such as the rather wonderful UKSafari.com) that cowslips smell of apricots whereas oxlip don’t; it’s not something I’ve checked but it sounds plausible.  Confusingly, you also have to bear in mind the False oxlip which is a hybrid of the cowslip and the primrose, and by no means uncommon.

Oxlip Prinula elatius (not an ideal illustration; it fails to make clear some of the most vital features)

Cowslips grow from a basal rosette of crinkled oval leaves, and used to be common across meadowland.  Now, with changes to farming practices, you’re more likely to find them on roadside verges, woodland edges, or in nature reserves.  The flowers are held on top of a tall stem or scape, in a cluster of downward-pointing individual flowers. The tube-like structure of the individual flower is clearly seen, and looks almost loose within the calyx. They’re a bright clean yellow, with orange markings in the throat of the flower. 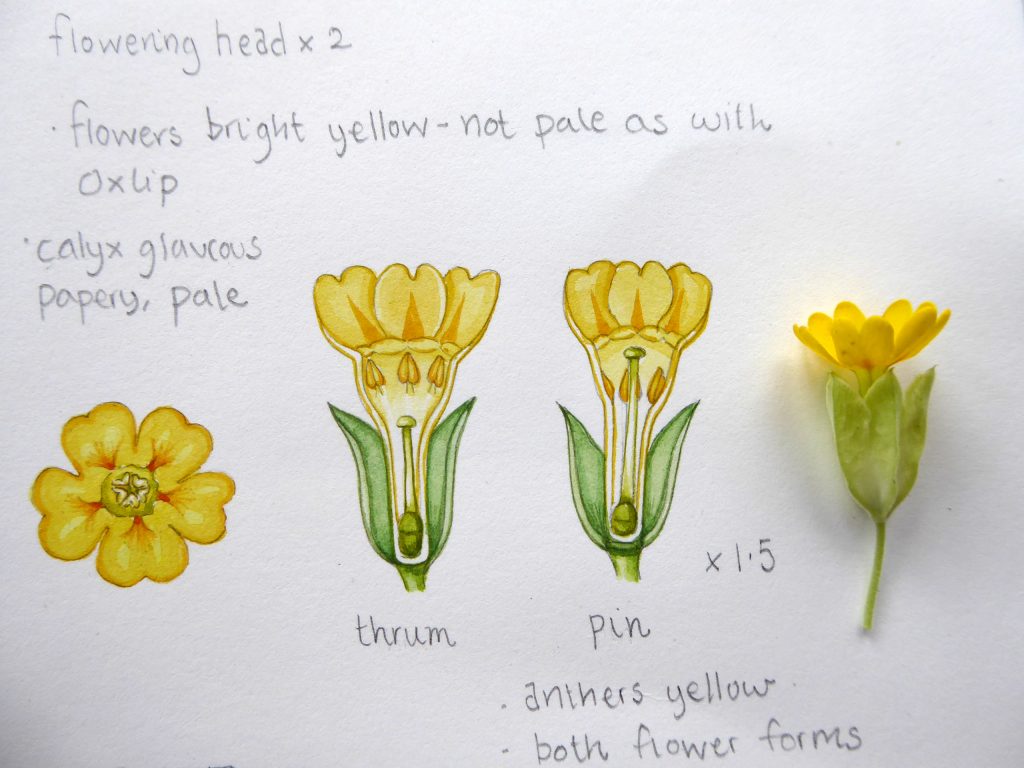 Close up of the cowslip flowers.

As with the primrose, the cowslip has  Heterostyly; two different flower-part arrangements within the same species.  These are known as thrum and pin.  Pin flowers hold their stigma above the stamens, thrum flowers have the stigma below the anthers of the stamens.  This helps ensure that pollinator insects will gather pollen from one flower type and successfully pollinate the  other type.  This leads to cross breeding and genetic diversity.  (For more on Cowslip heterostyly, click the link, or refer to the BBC Earth explanation of pin/thrum flower pollination.) 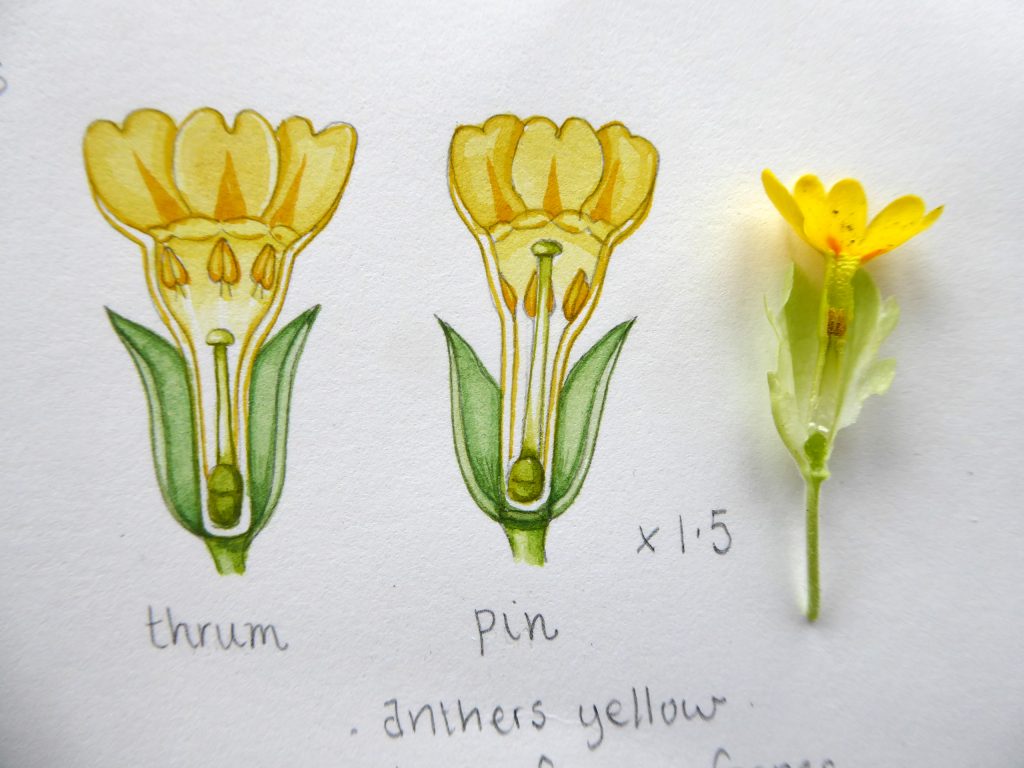 Pin and thrum forms of the Cowslip flower.

Interestingly, it was Charles Darwin who first noticed heterostyly in the Primula family.  He postulated an explanation for it way back in 1862. His ideas are described in ablog by Plant Scientist.

Folklore of the Cowslip

There’s a great deal of folklore surrounding the cowslip. Its name is originally derived from the word “cow-slop” or cow pat.  This refers to its love of pasture habitats.   It can be used as a weather vane (a shorter stalk meant a drier summer).  Fairies were meant to hide in the flowers.  A ball of cowslips, known as a “titsy-totsy” was used by children in divination games. (“Titsy-totsy tell me true, who shall I be married to?”)  The information on cowslip folklore and herbal remedies is taken from Christina Hart-Davies’s A Wild Plant Year, a book which is as fascinating as it is beautiful.  It’s well worth investing in. 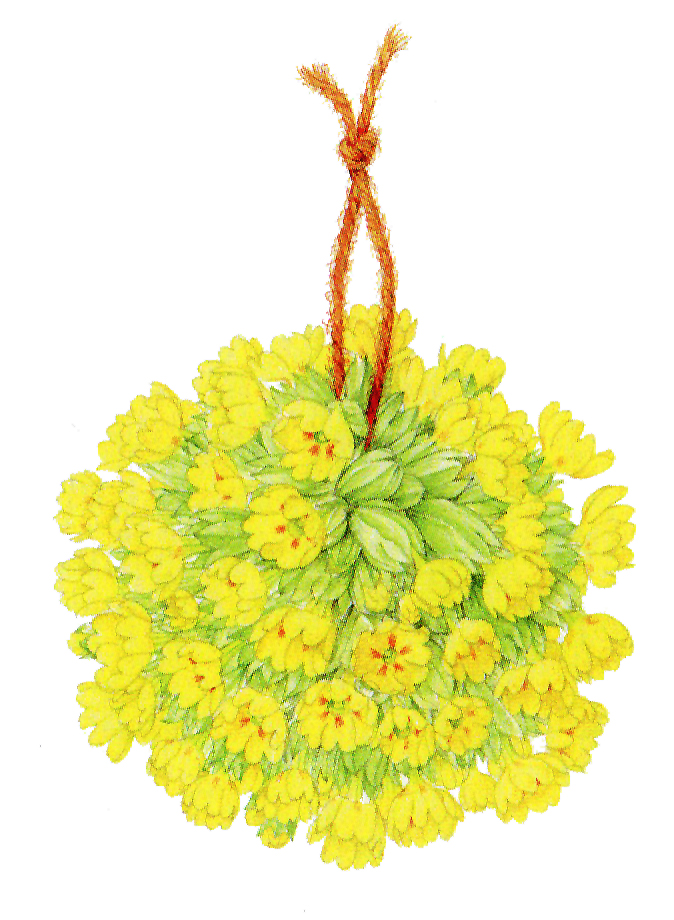 Christina Hart-Davies’s “titsy totsy” (the reproduction, scanned from the book, doesnt do the illustration justice)

The cowslip was used to make wine, to treat insomnia, sunburn, and headaches.  It was also associated with Saint Peter as the Victorians believed the flowers to look like a bunch of keys.

Going about my Sketchbook study

I started with a habit sketch, showing the plant growing in context; then chose one plant and did a big drawing of it cut to white. 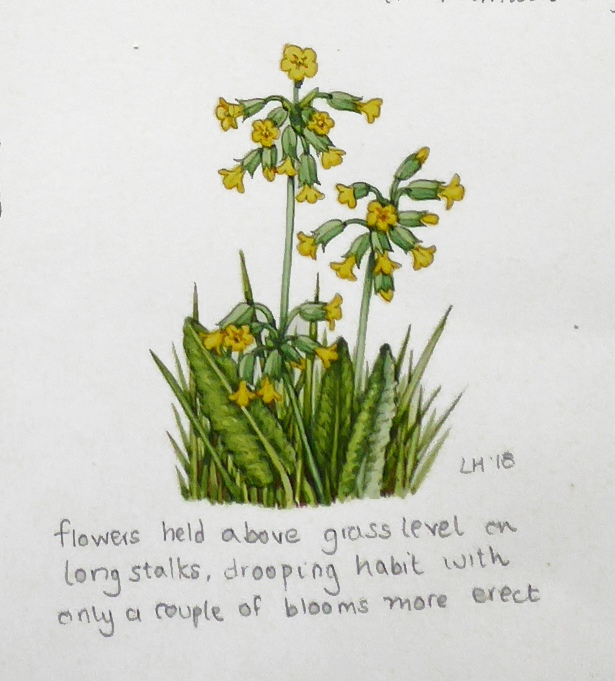 Habit sketch of the cowslip.

I worked into the leaves first.  One leaf was a detailed line drawing showing the network of veins.  The next was a tonal study, the third was partially painted, whilst the fourth leaf was painted in detail.  Although these leaves are really tricky to paint, I’m obsessed by them and rather love getting lost in their crinkles. 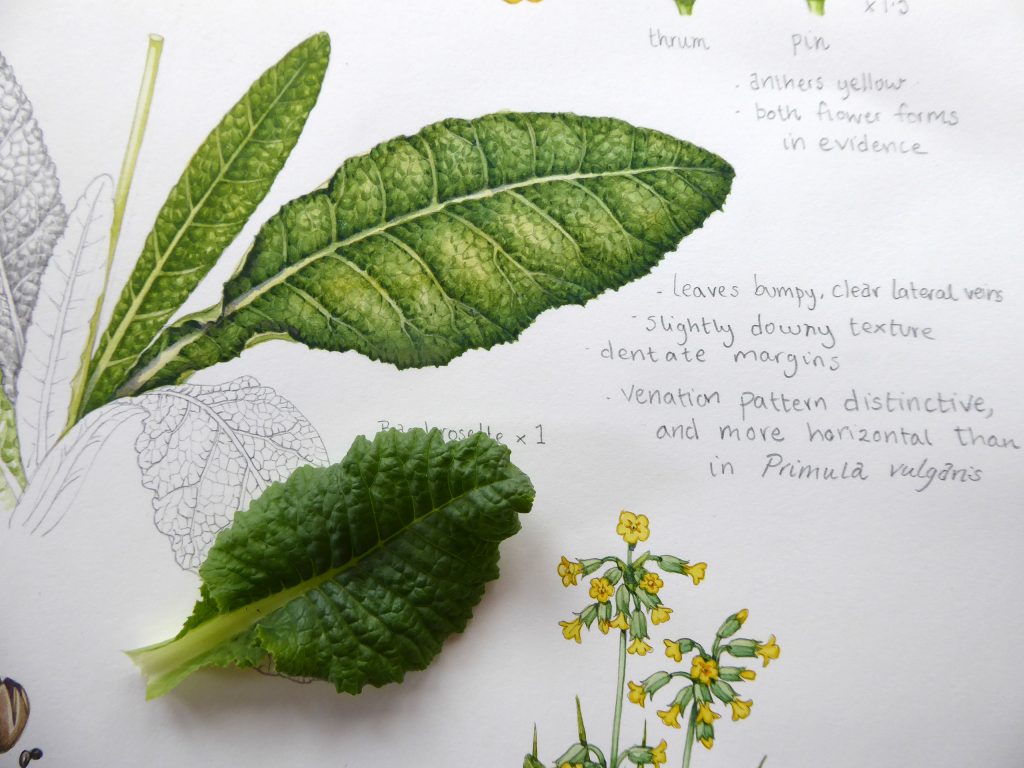 Painted cowslip leaf alongside a leaf from the basal rosette.

Sketchbook study of the cowslip flowers

Flowers next, mixing up that bright clean yellow with cadmium yellow pale and a touch of gamboge.  I think Cadmium lemon would have been a better option, had I had it in the paitnbox. 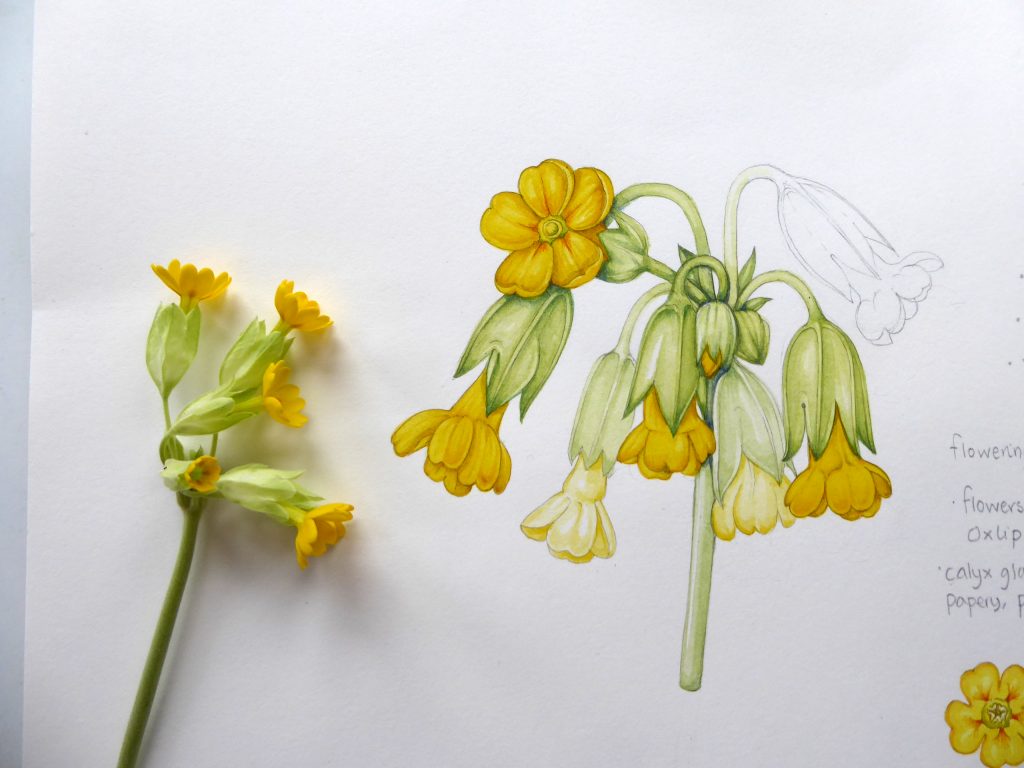 It does have to be said though, that no matter how hard you try it’s almost impossible to really echo the glow of the natural colours of flower petals, and the cowslip is no exception. 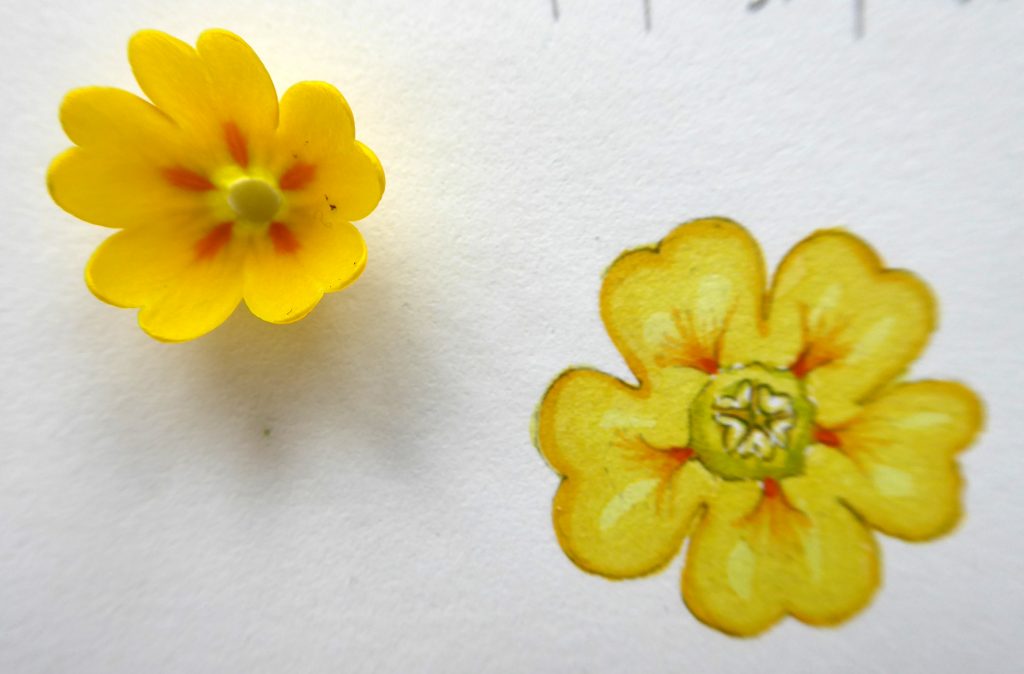 Individual flower, face on, showing the distinctive orange marks at the corolla base

Dissection of the flowers

Once the flowering head is illustrated, it’s time to get out a super-sharp scalpel and dissect it, then draw the results (hence the diversion earlier on pin and thrum heterostyly). 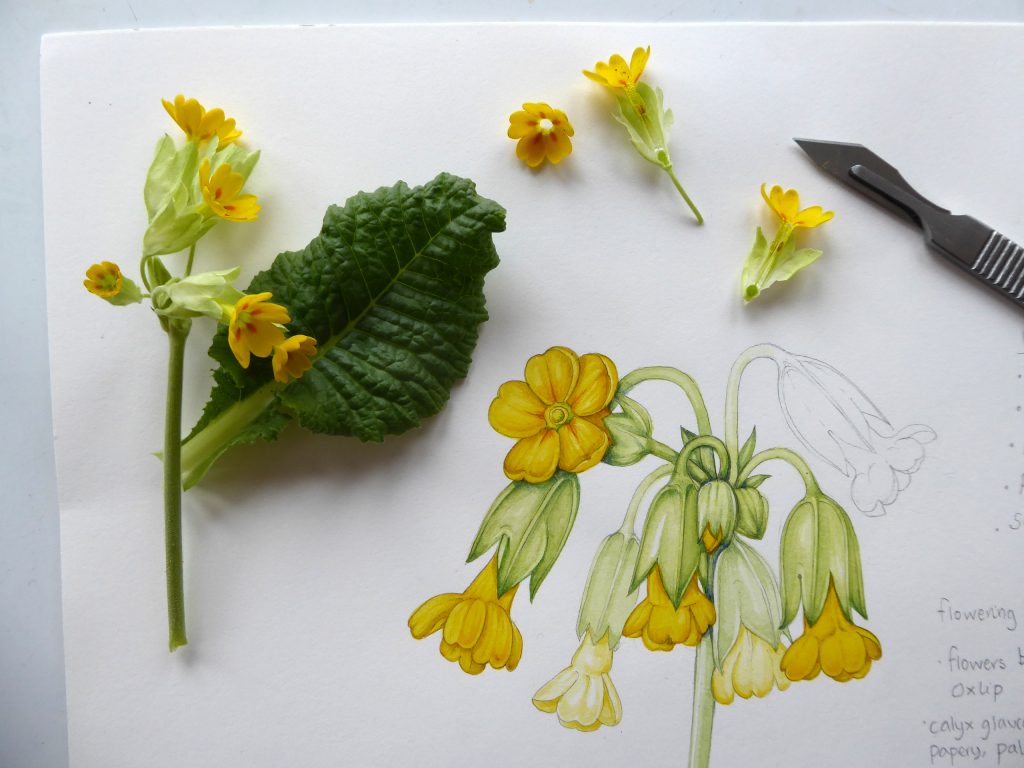 I save the seed heads from the cowslips that grow in the garden, so very luckily I had a few hanging around in the garden shed.  This meant I could include information on the seed structure, and the persistent papery calyx remnants that surround them.

After these investigations and drawings; which are always accompanied with written notes on what the flower looks like, how it grows, what the colours are etc.; the sketchbook illustration is complete. 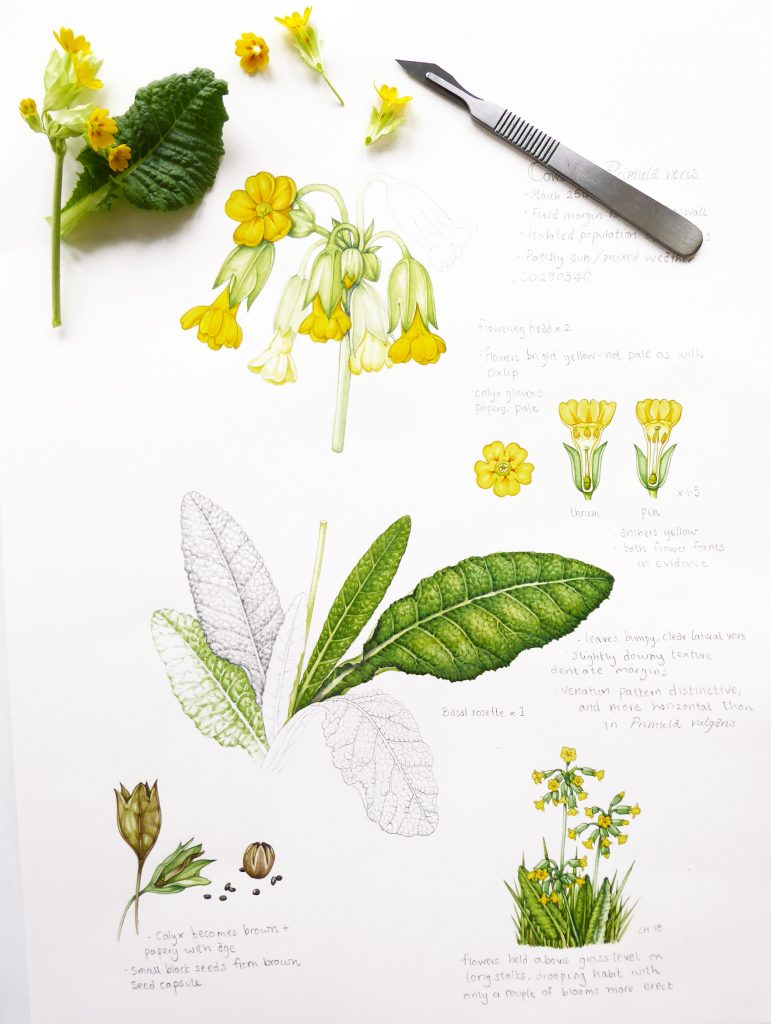 I sent it off to the customer who seemed really pleased with it, which is always a lovely feeling.

To be honest though, I enjoyed every moment of working on, and learning more about the gorgeous cowslip wild flower.

High resolution scan of the finished study of the Cowslip.