Posted on 15th May 201819th April 2022 in botanical terms, Botany: Telling species apart, Scientific Illustrator out and about 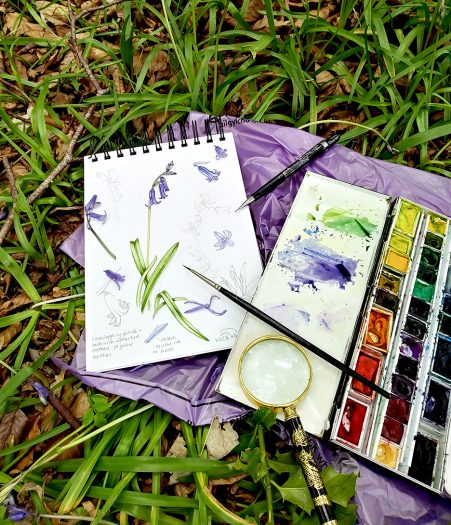 May is Bluebell time!

May is a really wonderful month for botanical illustration; all the spring flowers are in bloom and there’s almost too many subjects to illustrate!  I always like to visit our local bluebell woods at this time of year, and thought it might be an idea to write a blog on how you can tell the difference between a native bluebellHyacinthoides non-scripta and a Spanish or garden variety Hyacinthoides hispanica (or a hybrid of the two!) 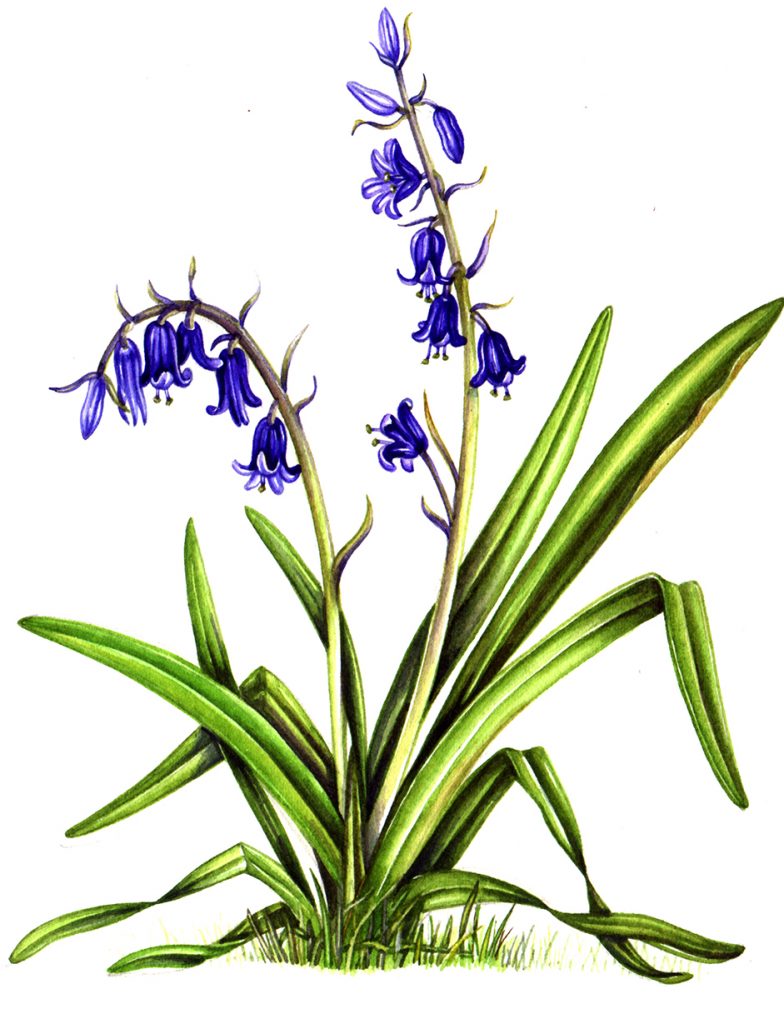 Threats to the Native bluebells from Spanish Bluebell

The iconic British bluebell wood, carpeted with deep purple-blue flowers, is one of the most beautiful sights of the British countryside.  However, these flowers are under threat from a variety of sources; climate change, habitat loss, and the presence of the Spanish bluebell.  These pretty flowers are more vigorous than our native population, and readily hybridise with them, making a species known as Hyacinthoidesx massartiana.  They escape from gardens, and are common across the countryside, and are already firmly established in many bluebell woods.  There are fears they may out-compete the native Bluebell.   For more on why these Spanish relatives are problematic, please check out the Woodland Trust’s blog. 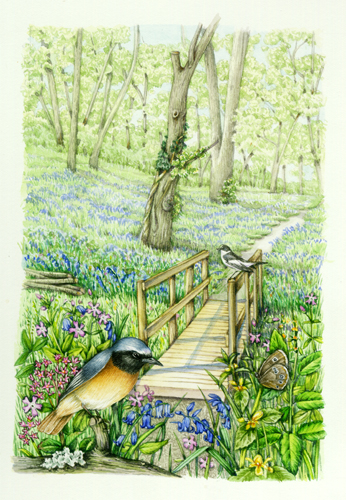 Illustration of a Redstart in a blubell wood in Wales

It’s a good idea to be able to tell these two species apart.  However, this can be tricky, especially with the hybrids.  Below are a few pointers, gleaned from experts such as Plantlife, the Woodland Trust, Grantham Ecology, and the Wildlife Trusts.

Since writing this blog, the botanist Richard Collingridge has left a helpful comment which is worth looking at before plunging into my species distinctions: “I’m afraid the botany has moved on – your “Spanish” bluebells are in fact hybrids – the hybrid (Hyacinthoides x massartiana) is very variable. The pure Spanish bluebell (H hispanica) may not even occur in the UK at all. Yours are towards the Spanish end of the hybrid’s variability though.

Have a look at this page which summarises the situation very well – it’s written for Cumbria, but I think it applies just as well throughout the UK.”   Thanks for the input, Richard.

First up, look at the leaves.  Both plants have linear, glossy leaves; but the leaves of the Spanish bluebell are markedly broader than those of the native Bluebell.  Grantham Ecology suggests a 50 pence test: lay a 50p coin across the leaf.  If the coin is broader than the leaf, it’s likely to be a native Bluebell.  If the 50p is thinner than the leaf, it’s probably a Spanish bluebell (a 10p coin, also about 1.5cm across, is equally useful).  Bear in mind, there’s lots of variation between leaves, even in an individual plant.

Next, take a sniff.  Although many say that the Spanish Bluebell doesn’t have a scent, I find this a little misleading as many of the hybrids do, although it may be quite delicate.  The native Bluebell does have a stronger perfume, which seems more pronounced in the evenings. 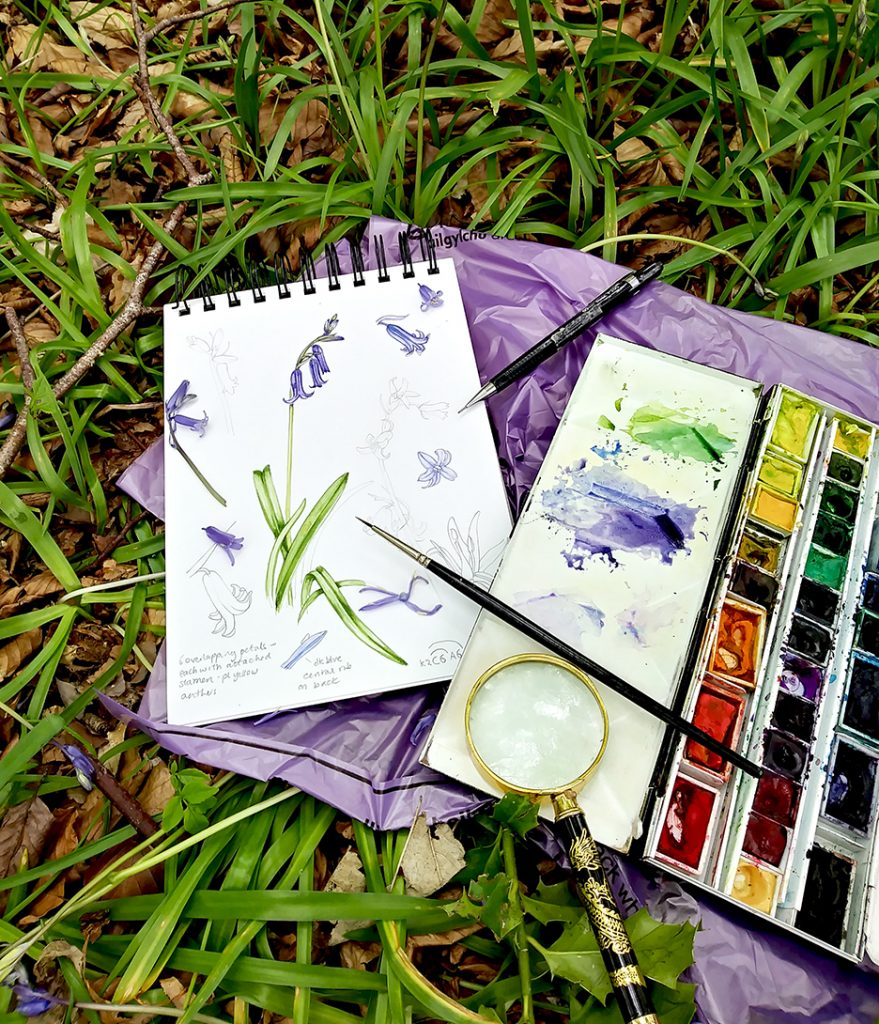 Sketchbook and paintbox out as I studied bluebells in Rook Wood, Hay on Wye

Moving onto the flowering stems, or racemes, there’s a clear difference.  The Spanish bluebells are borne on stouter stems, and these tend to be held upright.  Individual flowers appear on both sides of the stem, and don’t tend to droop. 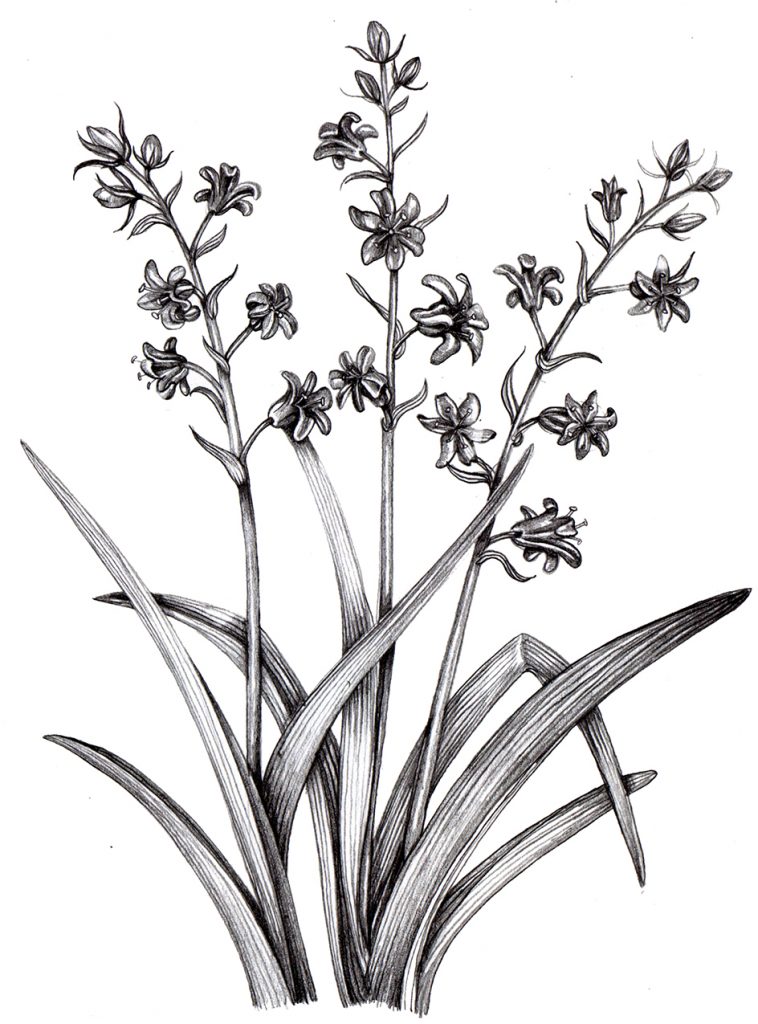 Pencil drawing of a Spanish bluebell, showing the characteristic upright habit and flowers all around the flowering spike

With the native Bluebell, the flowers tend to be on one side of the raceme, with a slender stem, and a markedly drooping habit or growth pattern.  These flowering spikes can look very delicate and elegant, and the stems seem to be thinner than the Spanish or hybrid bluebells. 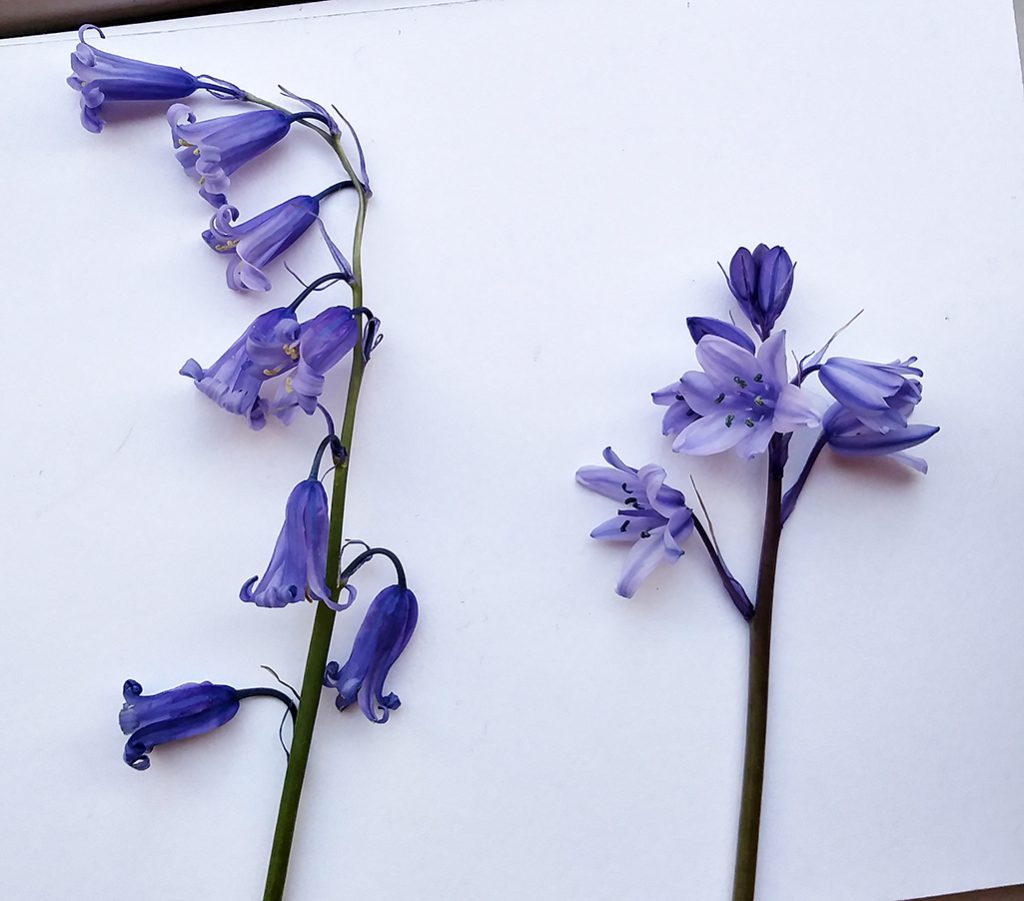 Flowering racemes; the native blubell is the drooping one on the left; the erect one (on the right) with flowers on all sides and less drooping is the Spanish blubell

Hybrids may also bear flowers on a drooping stem, but in general these seem to grown all around the stem, not just on one side.  They’re frequently paler than the native bluebell.

In shape it’s a tight tube with parallel sides.

Each flower comprises six fused petals, and the tips of these curve strongly back on themselves (they are recurved).  These curled petals are very pronounced, and will often make a full circle, touching the corolla tube or base of the petal tip.

Hybrids rarely have such tightly curved petal tips, and the sides of the corolla tube tend to flare out to make a wider bell-shape than the native flowers do. 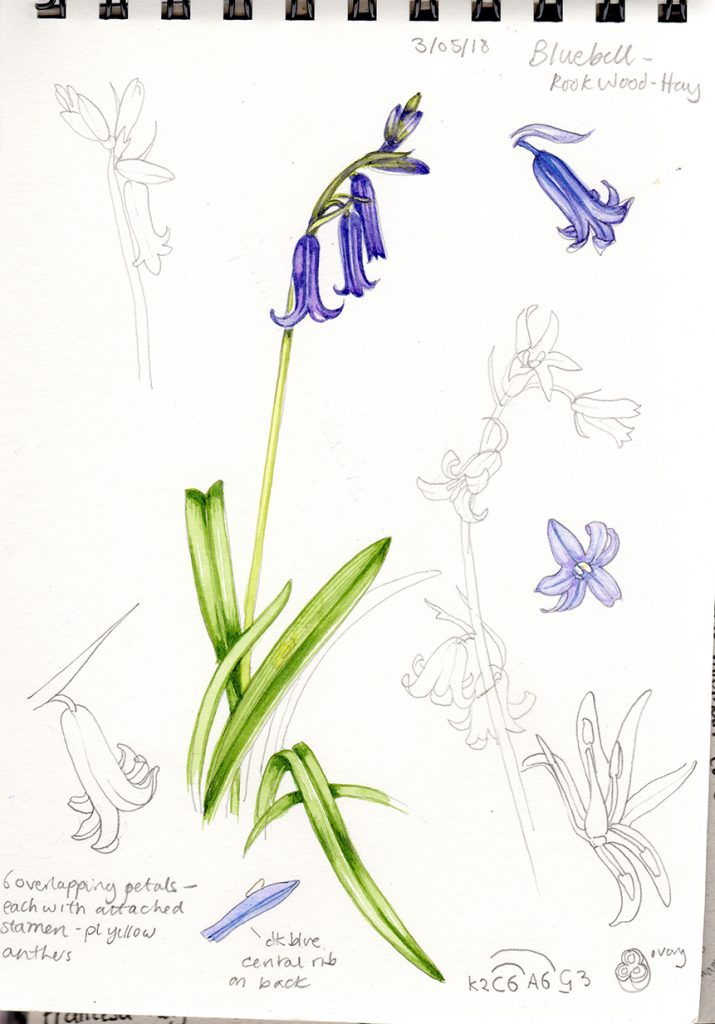 The Spanish bluebell tends to be a far paler blue, with a less purple hue.  They also come in white and pink (do be aware that the native Bluebell does occasionally put up white forms; these can be told by other diagnostic features rather than by colour).  Spanish and hybrids also have six curved petals, but these are far less recurved than the native species. 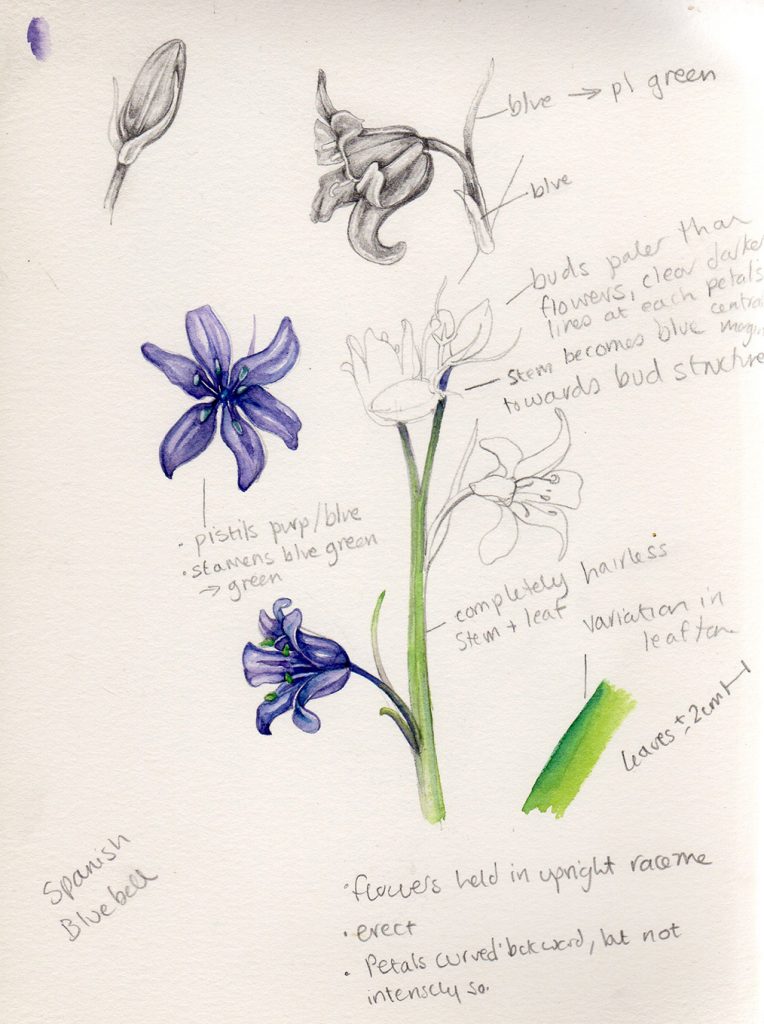 Seeing the two flowers together, it’s clear how different they look.  However, when they’re not side by side, and when hybrids abound, it can be tricky to untangle these differences.  Hybrids tend to show a variety of characteristics from both species.  The flowers below are from Spanish (on the right) and native Bluebells (on the left), and are not hybrids. 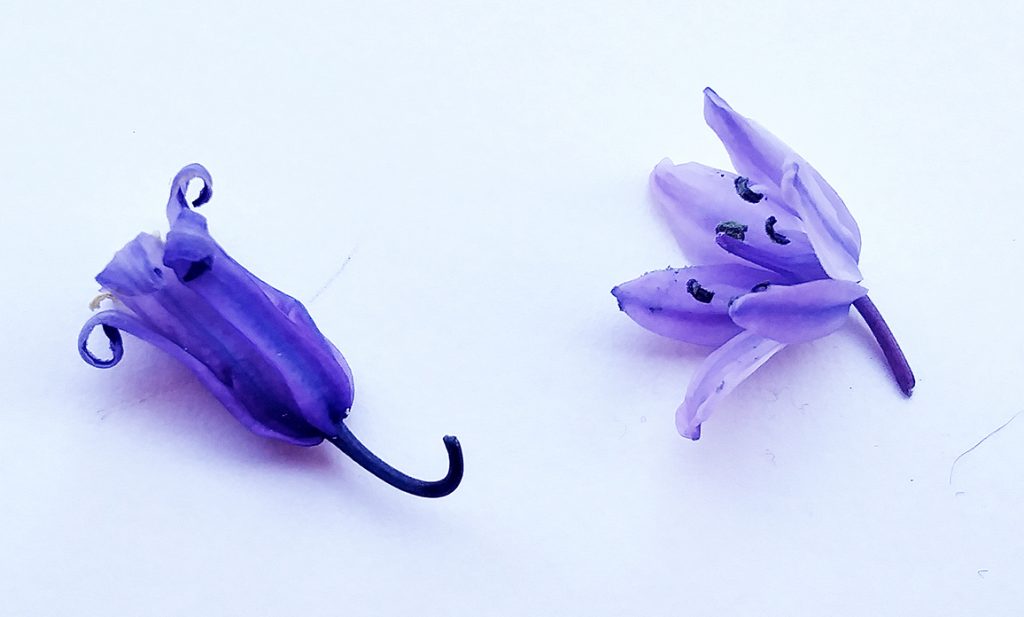 Another difference between the two is the stamen colour (well, the colour of the pollen the stamens produce).  In the native bluebell the anthers are a creamy yellow, or white.  In the Spanish bluebell they are blueish, dark blue, or greenish.  However, be aware of the hybrids; I’ve often seen plants that seem to tick all the boxes for the Spanish bluebell characteristics, but which have pale anthers. 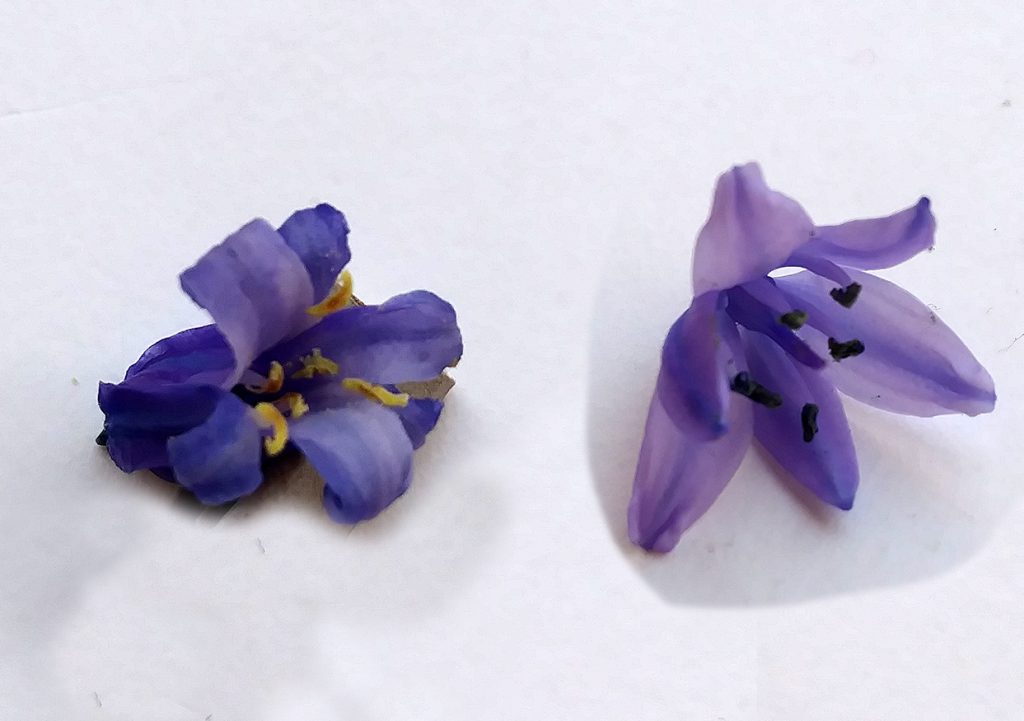 Anthers of the native bluebell (on the left) are pale cream; the Spanish blubell flower (on the right) has dark blue or greenish anthers.

Telling the Spanish and the native bluebell apart is pretty straight forward.  A quick look at leaf width, growth form, flower colour and shape and stamens will give you a secure identification.

The trickier part is telling the difference between the Spanish/Native hybrid Hyacinthoidesx massartiana and the native plant.  Berks, Bucks and Oxon Wildlife Trust have a good rule of thumb.  If you can see ANY of the diagnostic features associated with the Spanish bluebell in your plant, then you’ve got a hybrid on your hands.  Simple.

Now get out into your local woods and see how many of those plants are native, and how many are hybrids.  Our local bluebell wood has plenty of both; it’s useful to be able to tell them apart.

Below is a film of me creating my bluebell sketch in Rook Wood, near Hay on Wye.