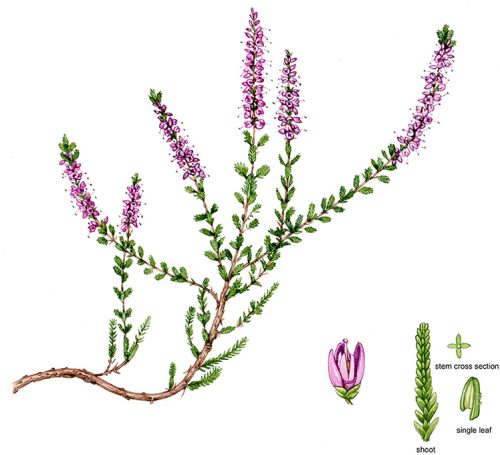 Whilst undertaking botanical illustrations for The Field Studies Council, I was asked to illustrate three different species of heather for a leaflet on heathland plants. 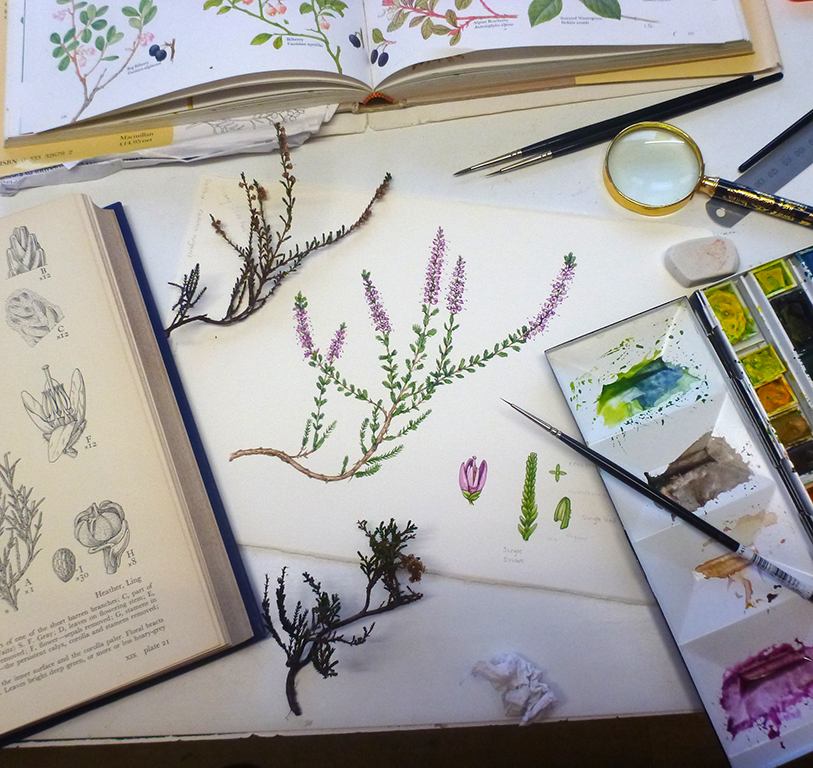 Illustration of Common heather or Ling in progress.  You can see the plant and my reference books.  these include:  The Collins Flower Guide, Garrard and Streeter’s The Wildflowers of the British Isles, and Stella Ross-Craig’s amazing line drawings.  My Series 7 Winsor and Newton 000 paintbrushes, and a 10x magnifying glass are also visible.

Although there are eight species of heather or heath found in the UK and Northern Europe, the three I illustrated are pretty common across the UK.   So I thought it might be handy to take a look at each in turn and point out the main species specific traits.

First up is Heather, Ling, or Calluna vulgaris.  Unlike the other British heathers, this one isn’t from the Erica family.  It is this plant that covers moorland in purple in the late summer.  It is common on bogs and in birch woodland, can be seen growing amongst pine and oak trees, and anywhere with acidic and peaty soils.  The plants can grow up to 1.5m tall (50cm is a more common height), and form dense clumps or smaller patches. 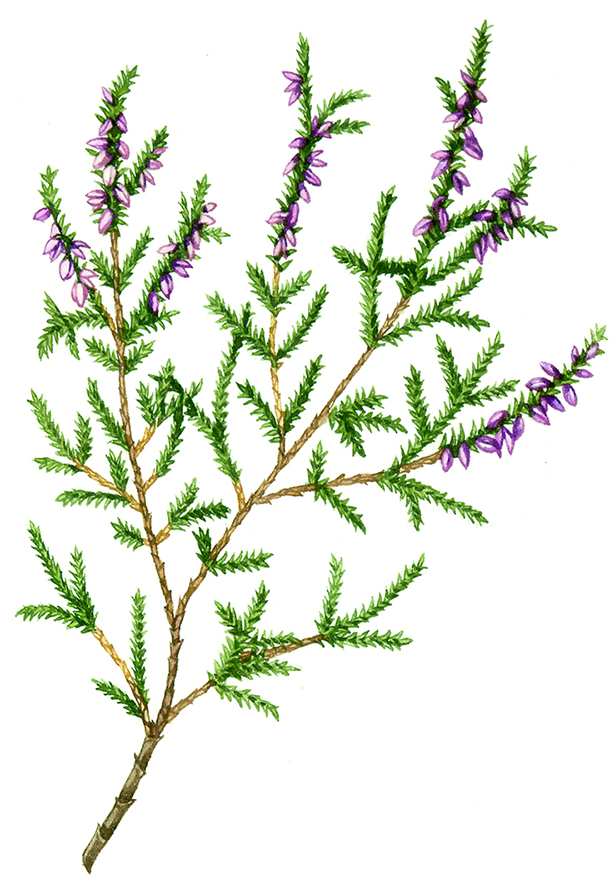 This illustration of Common Heather was done several years ago and was not accurate enough to pass muster.

C. vulgaris has tiny little leaves which grow opposite each other. This is the diagnostic feature that sets them apart from the other heathers, all of which carry their leaves in whorls.  Each leaf is only 1-3mm long. It is oblong and has distinctive margins curving back on themselves (revolute).  On young shoots these leaves overlap. 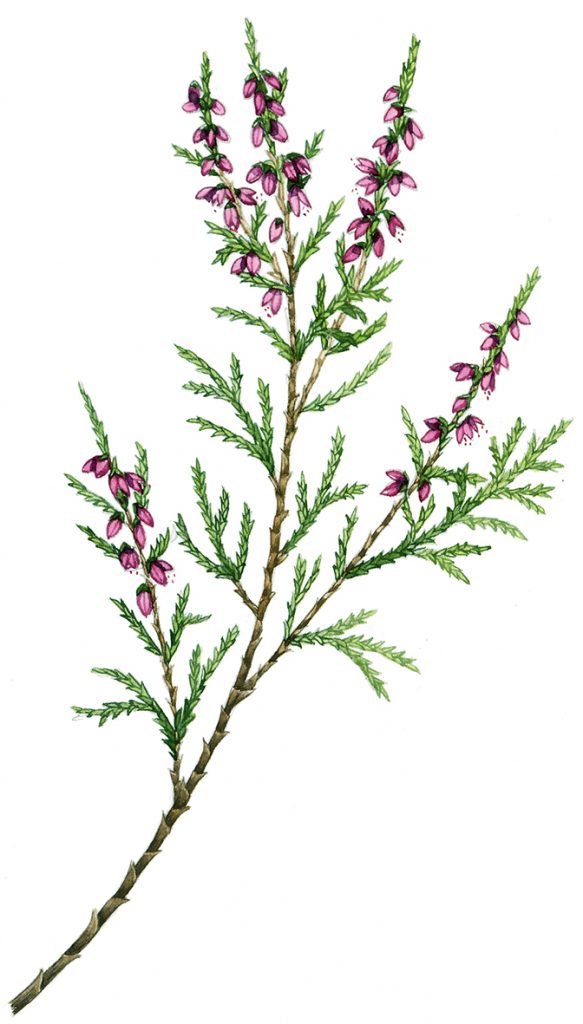 This second illustration of Heather was done more recently, but was not  detailed enough to be used on a chart comparing heather species.

The flowers are clustered in turrets or racemes, 2 – 16mm high.  Each individual flower is a tiny 3-4.5mm wide, and is made of four petals which are fused at their base.  The flowers have 8 stamens.  These extend well beyond the end of the petals.  Anthers are the same mauve as the corolla.  The petals vary in colour from pale pink, through mauves, to dark purplish magenta.  The calyx is larger than, and the same colour as, the flower.  This is an important diagnostic feature.  Sometimes  C. vulgaris has white flowers, which some believe to bring good luck because of its rarity.  It flowers from July through September, blooming after most other wildflowers. 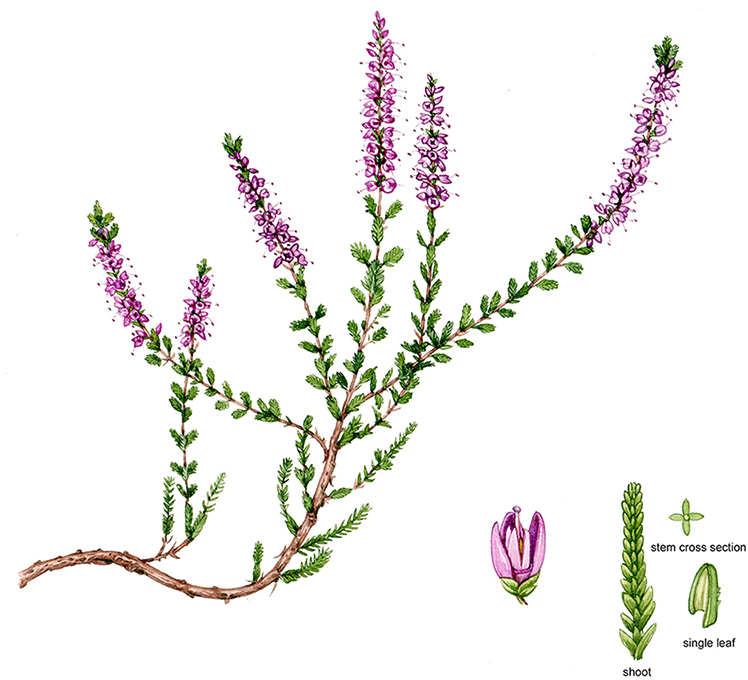 This heather illustration, was given the go-ahead and was finished within the last two weeks.  I used fresh growth of shoots from the hills near Hay bluff, and some dried heather specimens for corolla and calyx shape and distribution.

Common Heather used to be tied up in bunches and used to sweep earth floors.  It was used as a dye and in tanning, and remains an important flower in honey production.  It’s important for pollinators, and the game bird Red Grouse feed on its seeds overwinter.

Another common British heather is the Bell Heather, E. cinerea.  This plant is a member of the Erica family; these plants all carry their leaves in whorls.

E.cinerea can be found across Britain growing on dry and well drained acidic soils (although not in the East Midlands).  It’s common in coastal areas (think of the Purbeck heathland on the Dorset coast, or  Snowdonia) and sandy soils.  It’s also common in well-drained open woodland.  Bell heather frequently grows alongside other heather species.  The shrubs grow up to 60cm tall, and are evergreen.

E. cinerea has shiny hairless leaves and sepals.  Numerous  bunches of short shoots appear at the axils of the heather plant.  The leaves are needle-shaped, in whorls of 3, and are a shining dark green colour.  They curl over on themselves, almost completely hiding the underside of each leaf. 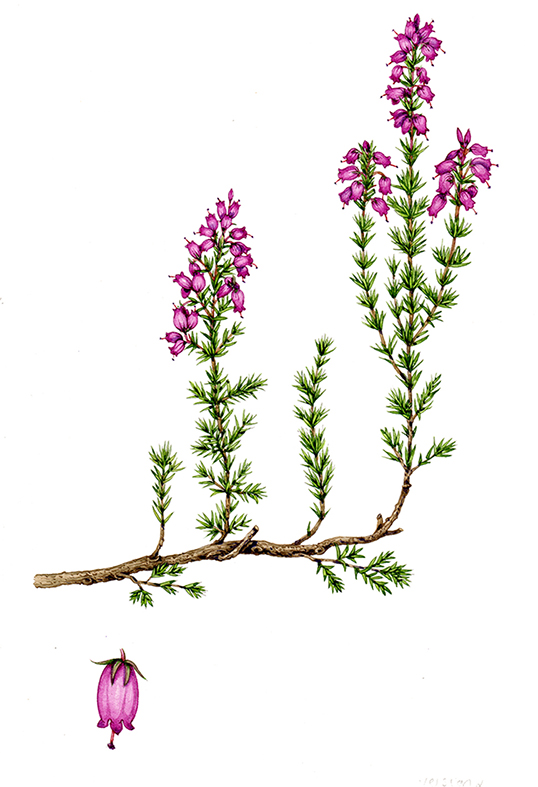 I found this specimen of bell heather over new year, near Snowdon in Wales.  Although their colour had faded to a rusty brown, the flowers were still partially present despite the snow.

Flowers are carried in short spikes or racemes, and are a distinctive bell-shape (hence the name).  The corolla is a dark magenta, a much stronger and darker shade of pink than Common Heather.  The flowers are 4-6mm across, with 10 stamens and pink-purple anthers.  Stamens tend not to project beyond the corolla, and on close inspection, they bear microscopic appendages.  The calyx is green or pinkish.  Bell heather flowers in late spring through the end of the summer.

E. cinerea is an important plant for insects, and over the years has been used as thatch, brooms, bedding, a treatment for the urinary tract, fuel, and twisted into ropes.

Cross leaved heath is also a common species of heather across the UK (most frequently in the North and West), growing in bogs, wet moorland, and wetter heathland.  It deals with wet soils far better than Bell heather, and thrives in acidic bogs.  The plants form dwarf evergreen shrubs up to 60cm.  The stems root at the base, and are slightly hairy.  The whole plant is pretty erect, and feels less shrubby than C. vulgaris.

Leaves of the Cross-leaved heath are very small and carried in whorls of 4, they are very hairy and greyish green.  The leaf colour was the most remarkable feature of the plant when I found it, downy with pale hair all over and a dull sage colour.  The leaves also have longer glandular hairs on the margins, and where they attach to the stem have a tiny red dot.  Hairs on the underside of the leaf are red.  As with the other heather species described, the leaves curl back on themselves, partially or completely concealing the underside of the leaf. 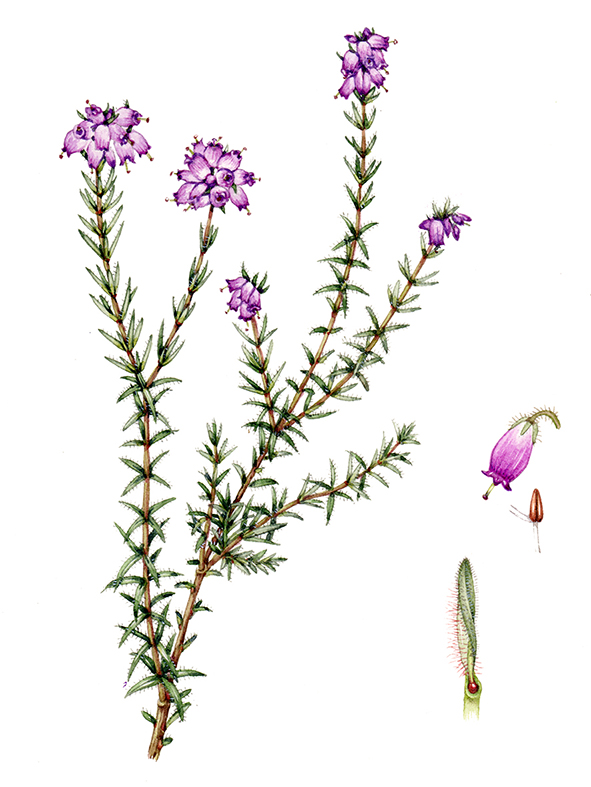 This specimen was found on the margin of a Sphagnum bog near Snowdon.

The drooping flowers are all clustered at the top of shoots, and don’t extend as far down the stem as those of  Bell heath and Common heather.  The corolla is a very pale pink, and 5-7mm across.  The 8 stamens tend not to project far beyond the corolla (if at all), and the anthers bear an obvious appendage.  The sepals are very hairy, and like the leaves have a thick coat of short greyish haris with some longer glandular ones also present.  It flowers late spring through September.

As with other heathers, E. tetralix has been used as the base of many cultivars found in gardens, and Charles Darwin suggested the sticky hairs that covered it suggested it could be a carnivorous plant (Nature Gate, Finland)  This is not the case, but is an interesting side note to see him fitting a possible function to the form of the plant.

References for this piece include feedback from the botanists I collaborated with to produce the illustrations for Field Studies Council, David Streeter’s Collins Flower Guide, Stella Roos-Craig’s amazing illustrations, the websites of the Wildlife Trusts and Arkive, and other useful links (see below).