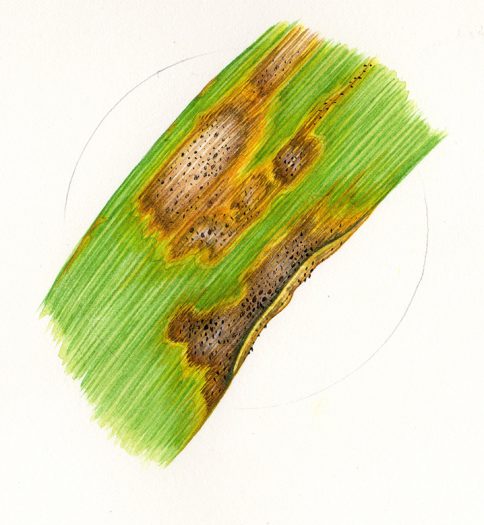 I was recently commissioned by Farmer’s Weekly Magazine to do some botanical illustrations of both Wheat (Triticum aestivum) and three common diseases of wheat crops.

The first one is the fungus Septoria, the other two are rusts.

Septoria triitici is a fungus that affects the leaves and stems of wheat plants.  Infection occurs in autumn and spring, with fungal ascospores brought on the wind.

Once established, the disease spreads as pynidiospores through crops by contact. The splashing of rain carries spores too.  Infection of young leaves near sites of Septoria, and in wet conditions, can be very quick.

The disease manifests itself on older leaves, is often first noticed in autumn.  It creates brown leaf spots (sometimes edged yellow) known as lesions.  These are often rectangular in shape, thanks to the veins of the leaves restricting the edges of the infection.  The brown lesions may eventually spread into one other, leaving large areas of dead brown leaf tissue, or may look water-soaked.

If you look carefully at these brown patches in autumn, they are covered in tiny black spots.  These spots are instantly recognisable, and are very distinctive.  They are the fruiting bodies of Septoria, and are called pycnidia.  Pycnidia produce spores that are spread by rain splash.  Septoria simultaneously produces wind spread spores from brown flask shaped perithecia. 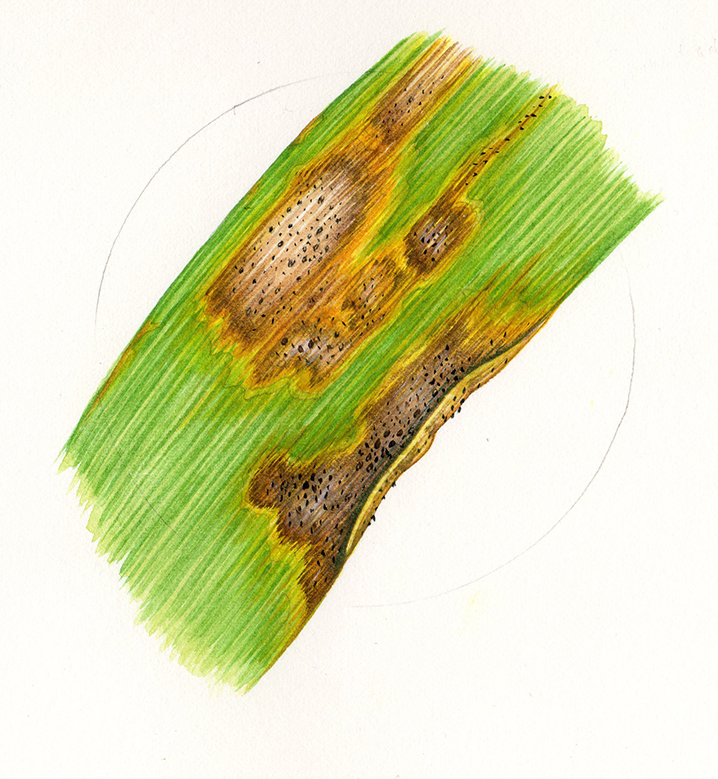 Septoria triitici on a wheat leaf

Spores overwinter in dead leaves and autumn planted crops and the spores are ready to infect young plants in spring or autumn.

These are fungal infections that afflict wheat (and rye and barley) crops.  They can overwinter, and have been around since the earliest days of human crop cultivation. (New Mexico State College of Agriculture).  Although they rarely wipe out whole crops these days, they can decrease yield by up to 20% (USDA).

After infection in the spring, Rusts produce pustules, which look like powdery spots of yellow or orangey brown.  These are often seen as the spring and summer progresses. They are clumps of uredia (spore producing bodies) which produce infective uredospores.  In the warmth of a late growing season, the spread of Rusts via these spores is high.  Later on in the growing season, leaves may be covered with black telia (bodies which produce teliospores), although these sexual teliospores seem not to be involved in spreading the disease, the genetic recombination caused by sexual reproduction may produce new and resistant strains of the Rust fungus).  Spores overwinter on volunteer, or non-sown, plants, and in spring the wind will carry uredospores from these plants to start infecting the fresh crop.

So how can you tell the two common British rusts apart?

Symptoms of brown rust appear in the autumn when yellow-orange and brown pustules can be seen.  These are about half to 1mm long, and in the early stages of infection look very similar to the pustules produced by Yellow rust.  However, later on in the growing season the random distribution of these pustules shows the difference between the two species, yellow rust bears a more regimented or striped distribution.  The pustules of Brown rust also become a darker brown, and less yellow. 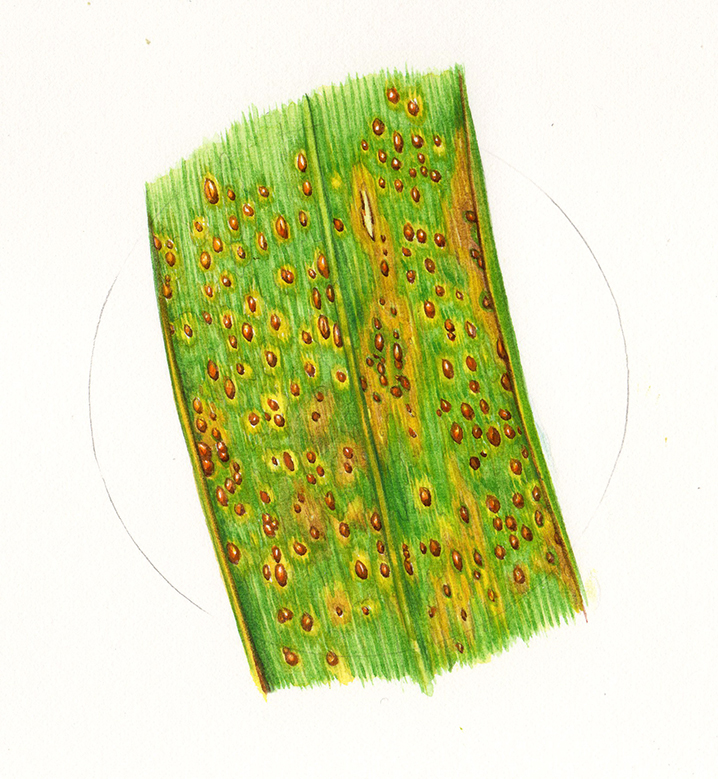 Brown rust mostly affects the leaves of a plant, although in severe cases it can show on stems and the ears (where the grains of cereal crops grow).

As leaves age and die late in the growing season, Brown rust pustules are often surrounded by a green island amongst a generally browner and more withered leaf surface.  This does not appear on leaves infected with Yellow rust.

The visible symptoms of yellow rust are parallel lines of yellow and orange pustules on leaves of adult wheat plants.  These appear in autumn, but can be discrete, and it may not be until spring when patches of young wheat plants are visibly infected that the disease becomes apparent to the farmer.

Yellow rust spreads across wheat leaves as bands, often with a strip of yellow preceding the areas of diseases leaf where spores are being produced.  These diseased areas are called lesions, and in older plants are quite distinct yellow stripes.  These infections make the leaf tissue become yellow, and can cause leaf necrosis (death).  Infected leaves will dry out in warm and dry conditions, and thus produce no energy for the plant. 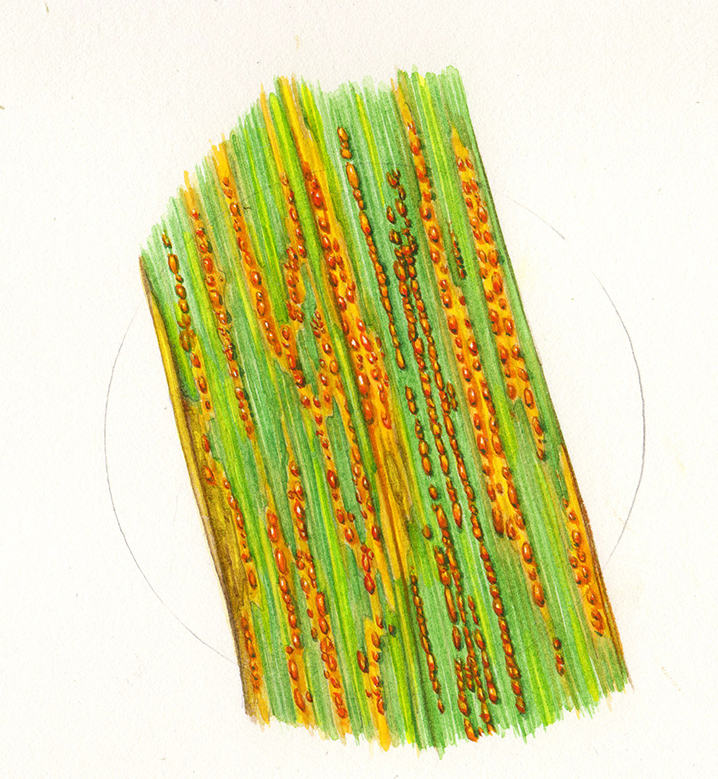 As with Brown rust, the infection can affect the ears.

For more on rusts and how they affect plants other than cereal crops, please visit the New Brunswick Museum web page on fungi.