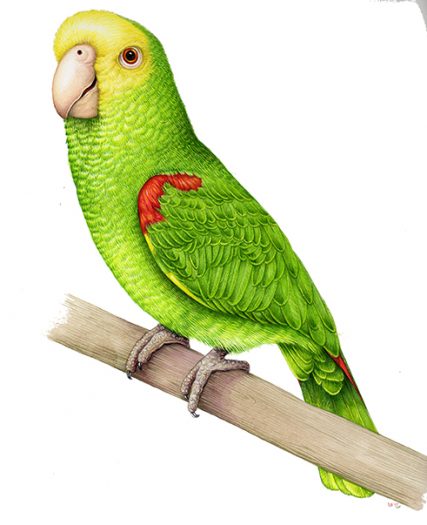 The first step is always the same, get the reference ready.  In this case my client wanted a quick turnaround, but had helpfully supplied me with photos of the parrot.  I went online and collected extra illustrations to be sure the details of the bird were clear, and consistent for the species (for more on painting from photo reference, see my earlier blog). 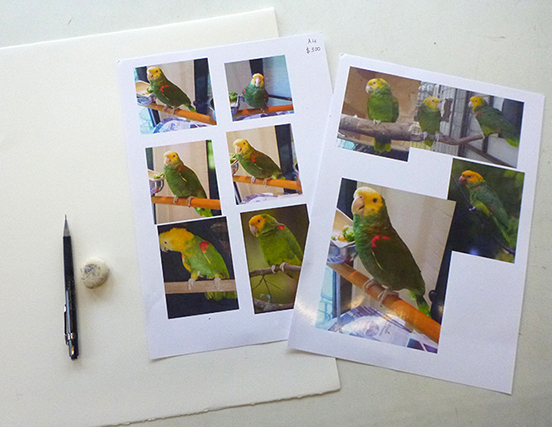 I like using mechanical pencils when I draw up my roughs, the Pentel P205 is a firm favourite, with an H or HB lead.  I always work on Fariano artistico Hot Press watercolour paper; it has a hard enough surface to prevent bleed or blurring, but doesn’t leave the paint wet and pooling on the surface for long. 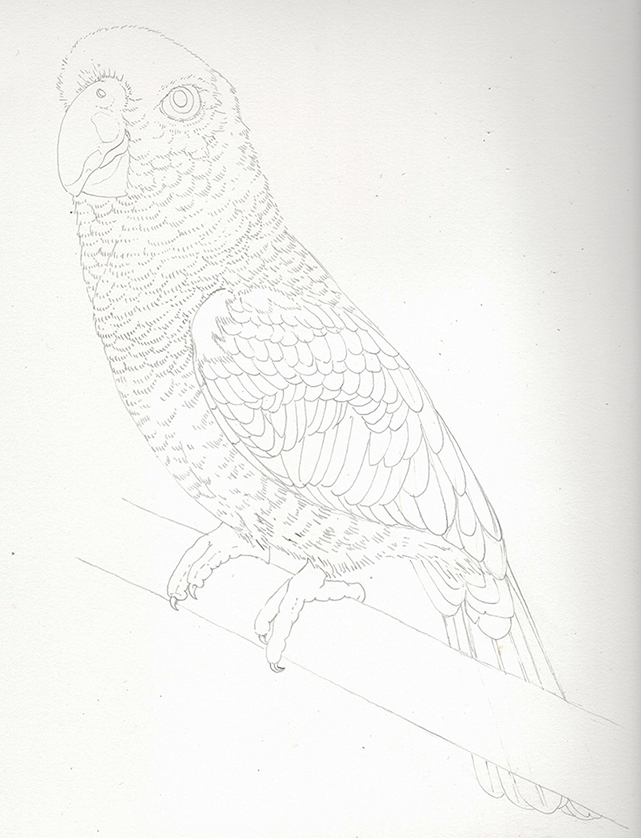 So here’s the pencil rough, always completely atonal, ready to be “coloured in”.

Building up the structure of the feathers

First step is to use small brush strokes to build up the structure of the feathers.  It’s vital to leave the lighter areas white.  I use Winsor and newton series 7 brushes, a number 1.   I’m yet to find any other brush that holds its tip in a similarly reliable way. 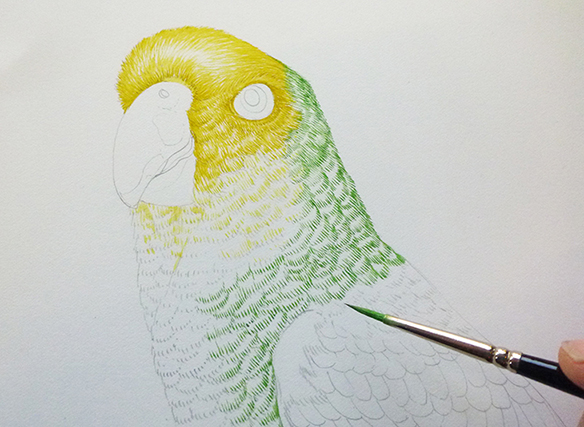 Next, I use the same layering technique to put in lighter areas of the feathers, again leaving the palest regions white.  This involves  blending of colours to ensure the colour gradations in the  plumage isn’t too stark. 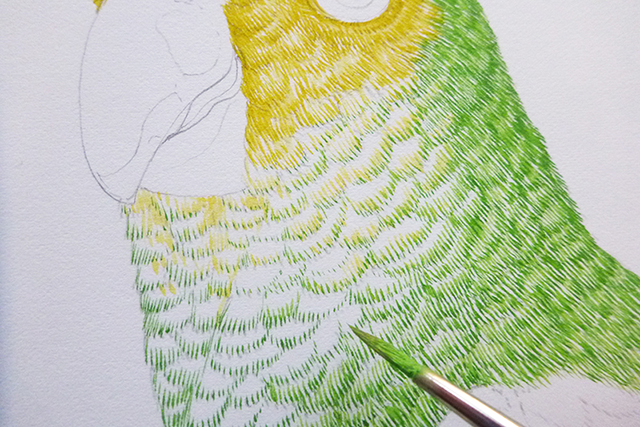 Next, I work deeper into these areas with the same tiny repeated brush strokes, bringing a solidity to the area that I’ve painted.  Again, it is vital to leave the brightest areas white or the whole illustration will become dingy and lifeless.  The white paper serves as highlights. 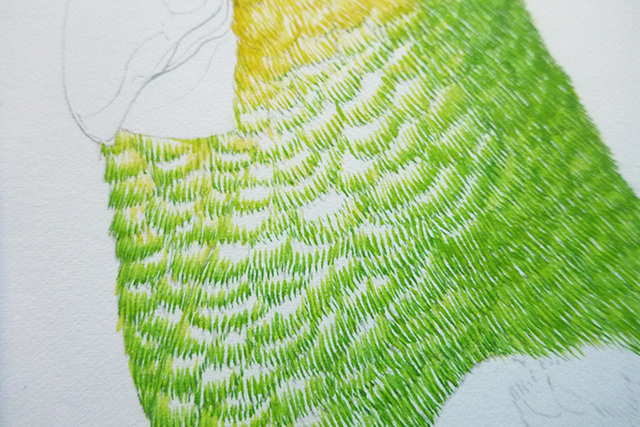 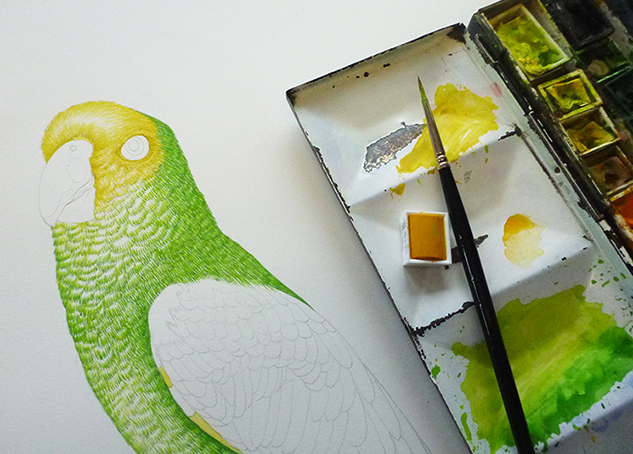 Then it’s time for a light overall wash.  This needs to have enough pigment to unite the areas painted thus far, but not so much that it swamps out highlights. I keep it very wet (as you can see from the paintbrush) and allow the paint to dry fully before continuing work on the picture.

The yellow area on the top of the wing shows what the wash looks like in consistency – very pale.  In this case I’ve used Winsor and Newton Watercolour paints(my favourites) and a mix of cadmium yellow pale and the tiniest touch of Winsor green (yellow shade). 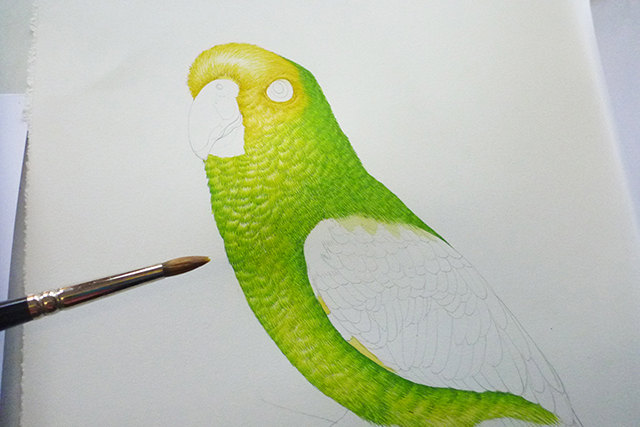 Once dry, I repeat the process, this time working into the larger feathers on the parrot’s wing, again, trying to fit form and function to the brush strokes I use to build up colour.  Each brush stroke sort of represents a filament of the bird’s wing coverts, primaries, scapulars, and secondary feathers.  I tend to plot in one side first and darker than the other, this helps give a sense of depth to the feathers, as if light were falling on them. 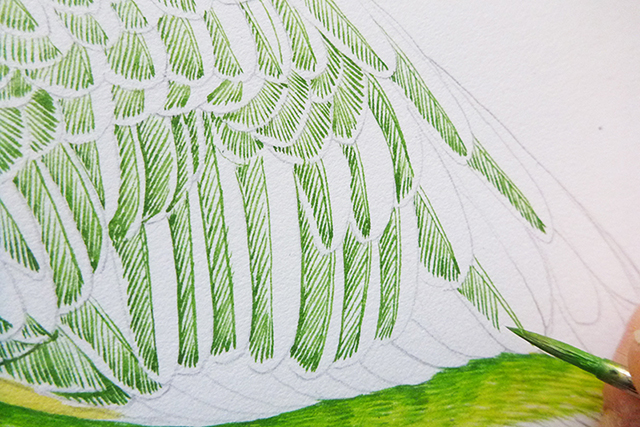 As I go along, I tweak the areas of shadow on the parrot plumage, adding a tiny bit of darker paint strokes here and there.  The first two layers of the wing detail are finished. 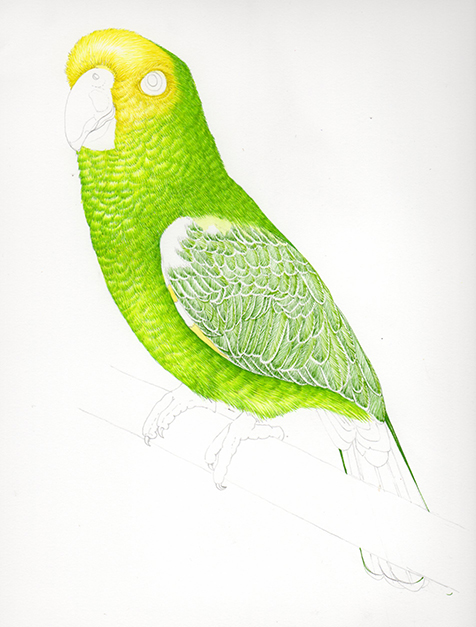 As with the head and body, I pop a pale yellow wash over the whole. 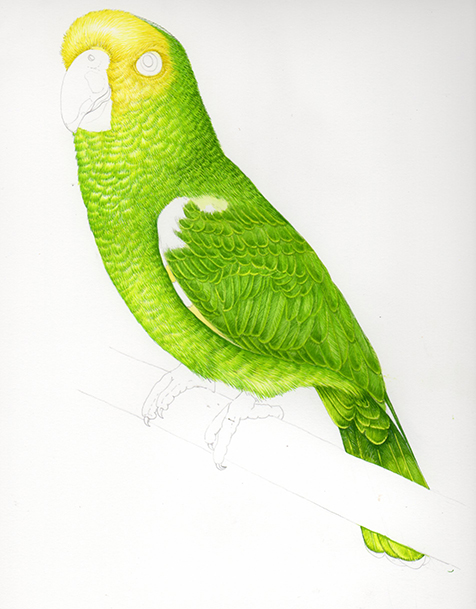 Adding details to the parrot

Next I put in the details, beak, feet, and edges of the eyes.  I find this tough as there’s only smooth areas of colour on the beak, so I can’t use my normal trick of building up tiny brush strokes to get depth and colour.  Instead, I rely on using a series of darkening washes.  The colours for feet and beak include Yellow ochre, Opera rose, Cadmium yellow, Ultramarine, and a touch of white gouache mixed in to give the right shade.

Finally, it’s all about putting on light unfiying washes and working into the areas of shadow, mostly using purples and blues.  I avoid blacks because it’s important the pupil of the eye can be engagingly dark.  I never use unmixed blacks, and favour adding a touch of Permanent mauve to the mix.  Again, highlights on the eye are the white paper which has been left untouched.  The wooden perch was quick (if dull) and then the pencil lines can easily be erased using a soft eraser.

I worked into the red wing epaulettes using cadmium orange and crimson lake, mixed with some yellows.  Red is rather a powerful colour, so it’s important to have little echoes of it distributed across the illustration (my Mum taught me this trick).  You’ll see it in the eye, the open mouth, and on the feet.  I did a similar trick with balancing reds when painting a Waxwing. 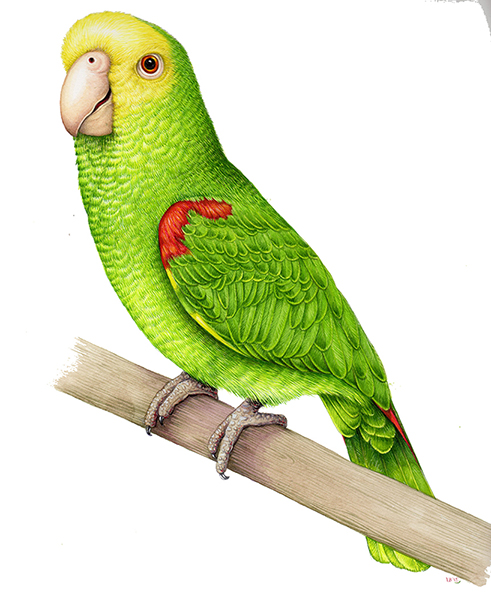 Finshed!  It took a good long day to complete this painting, and there are areas of it I’m not entirely satisfied with – I feel the wing is a little too static and flat, and I failed to do justice to the gold and browns of the iris.

however, it was an enjoyable task, and even better, my friend who comissioned it was really pleased.  Customer satisfaction is one of the perks of the job, so I’m happy with this commission.