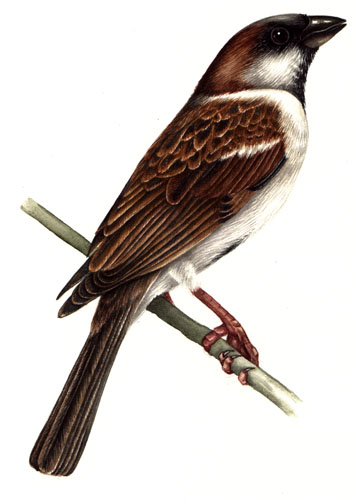 Unsurprisingly, like most scientific illustrators, I have a lot of love for the bird visitors to my garden.  I encourage them by feeding them grain, dried mealworms, nyjar seed and peanuts.  Not only does this tempt them in, but it also makes them the unwitting subjects of my illustrations.

Garden Birds in Hay on Wye

I learnt a good deal more about my bird visitors by joining the British Trust for Ornithology‘s Garden Birdwatch scheme.  It requires you to watch the birds in your garden for 10 minutes every day and then report the sightings once a week to the BTO.  They collate the results and construct distribution maps of species across the UK.  This discipline has really helped me learn my birds, and taught me to be far more aware of the wildlife in my own back yard.

Sometimes they stay still enough for a quick sketch, sometimes I catch them on camera.  Often I just freeze and stare at them going about their business.  I try to learn their distinctive poses.  Whether the common blackbird (above) or the rarer visitors (such as the long-tailed tit below), I feel privileged to have them in my garden.

The little blue-tits are very present garden birds in spring, perching precariously on the washing line and seeking out nesting sites.

Our garden has a resident throng of sparrows who mostly spend their day bickering in the jasmine bush.  In spring they pick holes in the old wall and nest inside, and seldom stop their argumentative twittering.

The species below is a tree sparrow; most of ours are House sparrows.

Although common in urban areas, I seldom see magpies in the garden.  I know a lot of people dislike these birds because of their habit of predating the nests of smaller birds, and their raucous cries; but if you stop to look at the pink and green iridescence on their plumage as they strut across the garden perhaps you’ll soften towards them.  I think they’re beautiful. 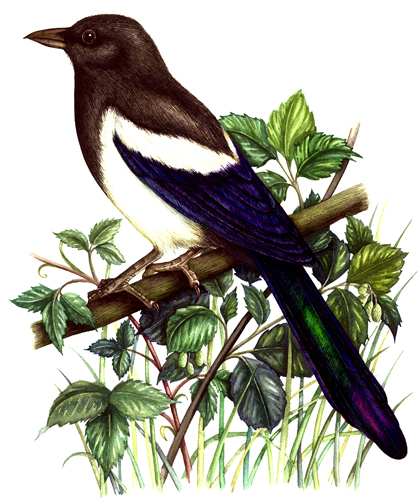 Goldfinch will come to the nyger seeds, or teasel heads when I leave them standing overwinter.  They also visit the teasels I encourage and let grow.

I even had a bullfinch at the feeder once, which thrilled me (it doesn’t take a lot).  Mostly they visit the rowan berries.

The woodpeckers come to the garden in winter for the peanuts, but never stay long.  Their red crests and pie-bald markings make them instantly recognizable and very obvious.

For a while we had a resident thrush who ignored the food I left out but used a stone just outside my studio window to tap, tap, tap away at snails.  When we heard the sound, the kids and I would creep to the door and stare out in silence as the thrush adeptly broke the shell and efficiently swallowed the snail.  The shell chippings are still among the winter grass.  Alas, I’ve never had one nesting in the shed, although I was asked to paint such a scenario once.

I know we have wrens because I sometimes catch their speedy low flight out of the corner of my eye, but I am yet to see one that’s not busy escaping.

Robins are frequent visitors, furiously chasing away the other birds from the bird feeder or, just like in fiction, hopping along as I garden and picking up the invertebrates my aimless diggings reveal. 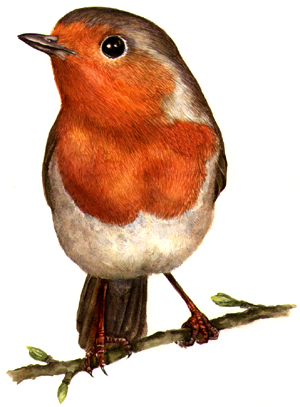 The wood pigeon is a bird which I find a little hard to love.  They seem bloated and heavy, and stare blankly out as they waddle across the grass.  They make a beautiful sound, however, and I am trying harder to like them.  I imagine everyone has their favourite garden bird, and their least favourite.  What’s yours?