Mara, wallaby, and a christmas illustration 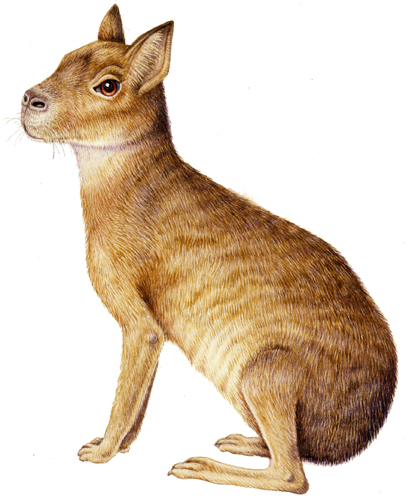 This week has been rather more to do with preparing for Christmas than illustrating.  However, I have completed the remaining four roughs of deer for Whipsnade Zoo, and painted a mara and a Bennet’s Wallaby.

The mara is an animal that I’d not heard about until this commission came through.  I took a few scans as I painted, in order to illustrate the steps involved in completing one of these mammal pictures.  First, I do a pencil rough which I send to the client for approval.  They give me feedback, and I make any alterations. 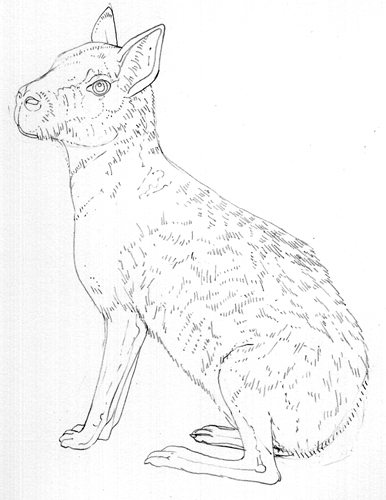 Once I get the go-ahead, I get out my paints and my number 2 sable watercolour paintbrush. I lay down a base coat of the fur colour, covering the whole animal.  I try to enhance the areas of light and dark according to where the muscle tone and underlying structure fall.  Next, the second layer of fur colour is applied.  I’m still concentrating on darker areas of the coat.  This helps add depth to the colour as well as making the animal “rounded”.  Subsequent colours will be added in layers according to the colours which painting. In the case of the mara the fur is darker on the back and grey-ish near the shoulder.  White areas (like the bib) are worked into with a purplish shadow.  A uniting wash covers the whole painting. I use very pale ochre in this instance.  This means only the details and dark shadows are left to do.

The final stages are putting in the eye, whiskers, claws, and dark shadows.  Many illustrators begin by painting the eye, but I don’t like the picture watching me as I work.  I know this is silly, but it has led to me working in this way.  It does mean that it is imperative not to mess the eye!  I need to keep the gleam on the pupil and avoid making the pupil too large.  I’m quite pleased with this final piece.

I also completed a Bennet’s Wallaby which was hard as it has areas of grey, and far redder fur.  However, I think it worked out alright.  I’m happy with the result. 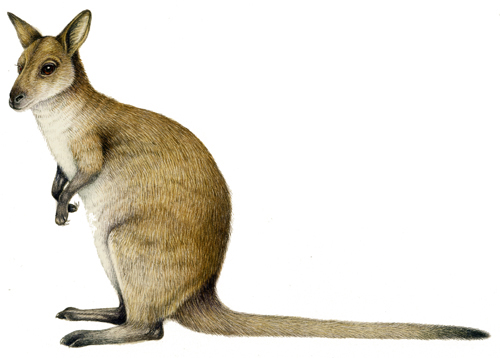 Since it’s Christmas eve, I thought I should add something a little more seasonal.  Here’s a kitsch robin in a santa hat that I did many years ago.  It was used by Hay Primary School this year though, which goes to show that it’s worth never throwing anything away.  Happy Christmas everyone. 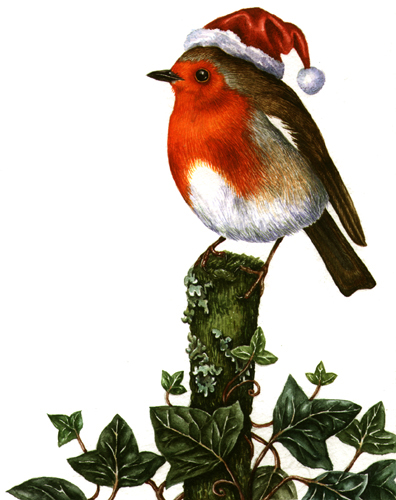